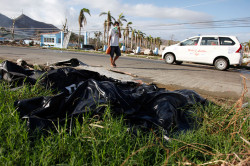 The living cover their faces as the stench of the dead still hangs in the air more than a week after Haiyan sent walls of water crashing down on Fisherman’s Village in Tacloban City. Weeks after the typhoon struck, residents say a lot more bodies remain buried beneath the rubble. Photo by Julius D. Mariveles

This entry was posted on Saturday, January 10th, 2015 at 10:28 am and is filed under . You can follow any responses to this entry through the RSS 2.0 feed. Both comments and pings are currently closed.