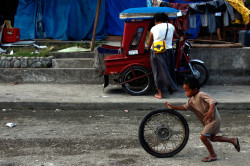 A boy plays at the Astrodome, one of the largest evacuation centers in Tacloban City, the largest city in eastern Philippines. This photo was taken a week after Typhoon Haiyan (Yolanda in the Philippines) struck the city and 44 other provinces in the country on Nov. 8, 2013. Photo by Julius D. Mariveles

This entry was posted on Saturday, January 10th, 2015 at 10:30 am and is filed under . You can follow any responses to this entry through the RSS 2.0 feed. Both comments and pings are currently closed.