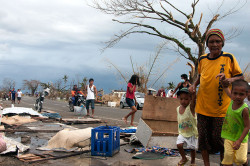 The relief truck cometh and people, including this grandmother and her grandchildren, run toward it. It was a Sunday, more than a week after the typhoon hit Tacloban City, and only the third time that relief goods were distributed. It was also the first time that the distribution work turned ‘systematic,’ according to an aid worker. Photo by Julius D. Mariveles

This entry was posted on Saturday, January 10th, 2015 at 10:31 am and is filed under . You can follow any responses to this entry through the RSS 2.0 feed. Both comments and pings are currently closed.