11 TVIs at TESDA: Sister firms, linked to pols, not SEC-registered

THEY ARE supposed to be top-rate technical vocational institutions (TVIs), which is why they bagged millions of pesos from the Technical Education and Skills Development Authority or TESDA.

Or actually, from the pork-barrel funds of some legislators that had been loaded up in TESDA’s agency budget.

But the Commission on Audit (COA), in its report on TESDA for 2013, had found them “non-compliant” with TESDA’s training rules, and their project implementation, marked with “discrepancies.” Generally, for a lot more money per seminar, they trained fewer students across shorter training periods, COA said.

Data from the e-Fund portal of the Department of Budget and Management (DBM) show that at least 19 legislators had allocated between P12.5 million and P90.95 million of their pork shares from 2010 to 2013 to the 11 TVIs named in COA’s report.

At least two of the 11 TVIs – Ilaw ng Bayan and I-Connect Solutions Tek Bok Inc. – were even described by state auditors as having not one of the livelihood programs that “could be associated with any of the programs per training regulations or competency-based curricula.”

In an effort to understand why, despite these COA findings, these TVIs remain in the good graces of some legislators, PCIJ checked out the files of the Securities and Exchange Commission (SEC), mined DBM’s database on PDAF releases, and visited with some of them at their offices.

PCIJ’s research, however, yielded more questions than answers. Here’s what we found: 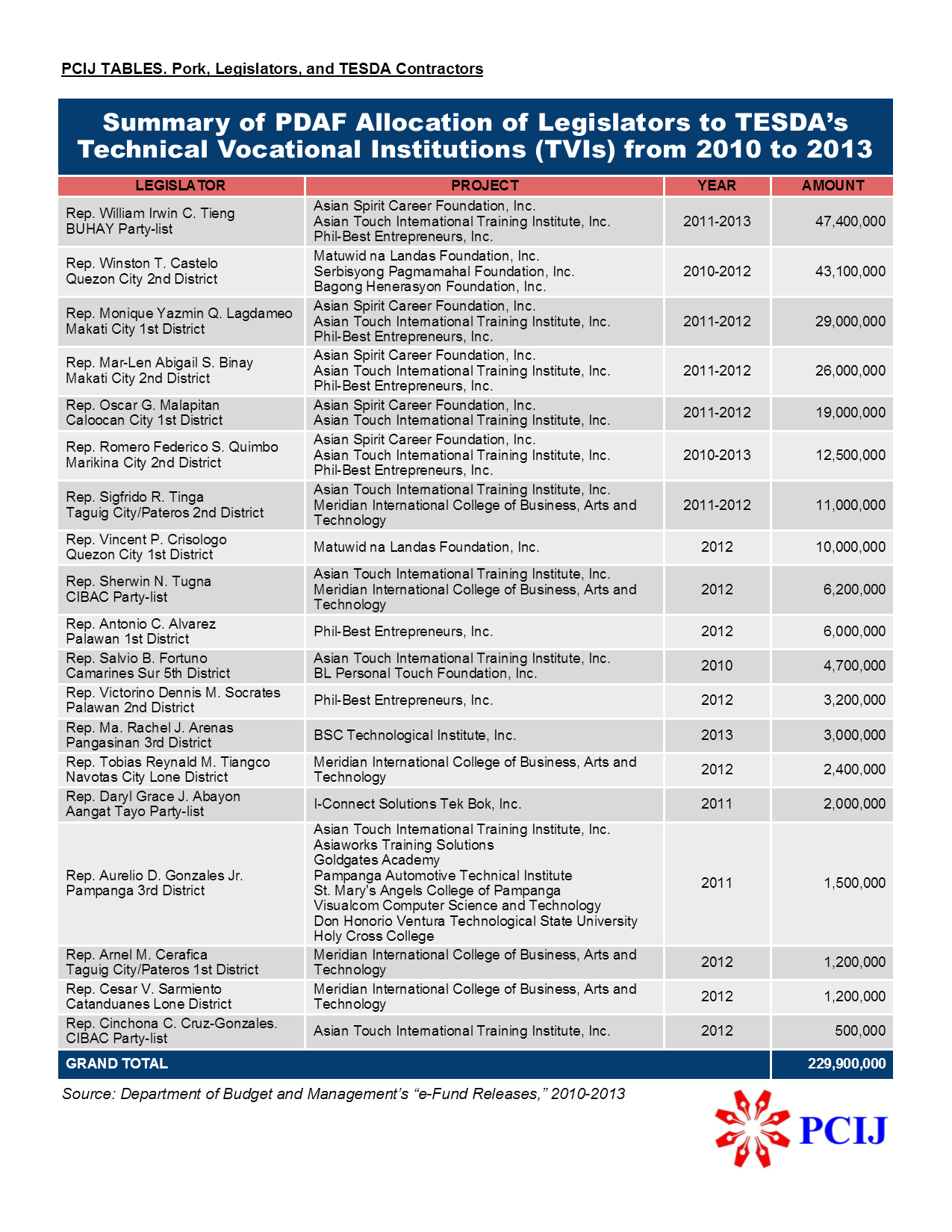 PCIJ’s further research shows that Pascual is the son of Amelia. Meanwhile, Karina, Myra Joyce, and Ma. Paz are sisters of Amelia. Pascual is the business development manager of Bruno’s Services Corp. (BSC), which runs Bruno’s Barbers, one of the leading barber shop chain in the country. It also runs Fab Salons. Bruno’s Barbers started in 1990 and now has 30 branches across the country.

No corporation under the name of Bruno’s Services Corp. (BSC), however, is listed to have registered with SEC.

DBM’s data on lawmakers’ pork releases from July 2010 to June 2013 show that BSC Technological Institute received P3 million from the PDAF of Pangasinan 3rd District Representative Ma. Rachel J. Arenas in 2013 for the implementation of specialty training program in Hairdressing NCII for approximately 150 students of the 3rd District of Pangasinan.

COA’s 2013 Annual Audit Report (AAR) on TESDA said “(t)here was an excess payment of training cost and assessment fee in the total amount of P2,025,000.00 made to the  BSC Technological Institute for 150 scholars on Haircutting.”

COA explained that “(a)s compared with the TESDA’s regular rate on the training course in Haircutting,   the training cost being claimed by the BSC is higher by P13,000.00 per scholar.  Likewise, the assessment fee which is inclusive on the claim made by the said TVI is in excess of P500 per trainee or a total of P75,000.00.”

I-Connect Solutions Tek Bok Inc. listed the residential address of its board members Mark Rainier T. Luz (board chairman), Danilo Lingad, and Carla Bumagat as its office address, too. But that same address belongs to two more entities:  Margin Multi-Ventures and Construction Corporation, a private company, and the Party-list group 1-ABAA (1-Ako Babaeng Astig Aasenso), which ran but lost in the 2010 elections. 1-ABAA became controversial in 2010 when it proposed a law putting a 10-year cap on the validity of a marriage contract.

Margie Tajon was at that time named as the 1-ABAA president. A certain Margie Tajon Luz also appears as the president and board chair of another TESDA TVI, Gabaymasa Foundation. Inc. In December 2014, the Ombudsman filed graft and malversation charges against Luz and Gabaymasa for their involvement in the so-called “fertilizer fund scam.”

I-Connect registered with the SEC on July 23, 2009 to “establish and operate an Education Institution or Learning Center, which shall provide technical, vocational training programs, and courses in the study of technical-vocational and such other short term courses.” DBM’s data on PDAF releases show that former Aangat Tayo Party-list Rep. Daryl Grace Abayon allocated P2 million to I-Connect in 2011 as “(f)inancial assistance to the TESDA Central Office for the implementation of scholarship program.”

Ilaw ng Bayan, which has Quezon City Vice Mayor Joy Belmonte as an incorporator (as well as its president, according to its Facebook page), has two SEC registration records. It first registered in 1993 but that is now listed to have been revoked. It registered again in 2015 for this purpose: “to establish an educational scholarship/dormitory shelter, and/or other assistance for deserving disadvantageous students.”

Also referred to in its documents as the Quezon City Skills and Livelihood Training Center, Ilaw ng Bayan’s course offerings include “bartending, hilot, food and beverages, barista, housekeeping,” according to its Facebook page.

Informatics Computer Institute Valenzuela closed shop on June 30, 2014, according to its website. This was within six months after it was able to get pork-funded projects with TESDA.

According to Eloisa Edano, manager of Informatics in Megamall and Makati, the franchisees of Informatics are required to register their own companies with the SEC. All that the parent company provides its franchisees, she says, are course curricula and training for their management staff.

Matuwid na Landas Foundation Inc., which listed its office address at 83 Times St., West Triangle, Quezon City, registered with the SEC on March 22, 2012. Records show that DBM released pork funds to the foundation in September and October of the same year. This means it registered in the same year that it landed pork contracts with TESDA.

Two Quezon City legislators – Winston Castelo and former 1st District Rep. Vincent Crisologo – allocated P10 million each to Matuwid na Landas Foundation in 2012 as financial assistance for the implementation of scholarship programs. In its 2014 GIS, the foundation said that its primary purpose is “to provide hope to people by giving them positive outlook in life that with the Matuwid ng Landas advocacy, we can improve lives for the common good of the Philippine Society.”

It also engages in “acquiring, constructing, erecting, leasing, and operating “plants, mills, factory sites, and the machineries and equipment required for the conduct of such manufacturing operations.”

Mechatronics listed its office address at Mega Plaza Building in Ortigas, Pasig City, and said it has a branch office at the UP Campus in Diliman, Quezon City. Gamaliel F. Itao is listed as board chairman and president; Virginia C. Itao, corporate secretary; and Eduardo S. Guinto, Loreto D. Caluya Jr., and Philip Marvin D. Joven, board members.

ICC has five business lines: Project Engineering, Systems Troubleshooting, Product Distribution and Selling, Maintenance Contracting, and Training. In 2013, ICC bagged a P4.019-million contract with the Department of Finance (DOF) for the “operation and maintenance service for the power and utility system of the DOF for the period February 2013 to December 2013.” No corporation under the name of Industrial Controls Corporation (ICC), however, is listed in SEC.

In 2005, Mechatronics was established to be the “training arm of ICC.” Mechatronics is listed to be a “TESDA (Technical Education and Skills Development Authority) accredited Training and Assessment center.” Meantime, ICC Global Technical Manpower Services was registered with the SEC in 2011 to “offer and engage in management and maintenance contracting services.”

The three corporations have the same set of board members and officers. Gamaliel F. Itao is also the chairman of Mechatronics and Robotics Society of the Philippines (MRSP), “a group of people who are committed to the advancement of mechatronics and robotics technology in the Philippines.”

In its 2013 report on TESDA, COA said that in its “audit of 37 disbursement vouchers paid by the Districts of MuntiParLasTaPat and Manila” to Mechatronics Technologies, Inc. and Honorio Lopez Technology Institute, “77 percent of the total scholars or 481 out of 623 did not undergo the mandatory assessment which is not in accordance with TESDA Circular No. 4, series of 2013.”

COA added, “(There) were cases where the number of days required to finish the two courses undertaken by Mechatronics Technologies, Inc. was shortened by 12 to 26 days.”  It said that the attendance sheet submitted by Mechatronics showed that the scholars completely attended the program. But when state auditors interviewed 28 scholars by phone, they found out that the students “took the training less than the required number of training days.”

Meridian International College of Business, Arts and Technology does not seem to be listed at the SEC as such. There is a Meridian International College of Business and Arts, Inc., which is more popularly known as MINT College. It registered with the SEC on June 9, 2010 and listed its office address at 2/F Commerce and Industry Plaza, Campus Ave cor. Park Ave., McKinley Hill, Fort Bonifacio, Taguig City. 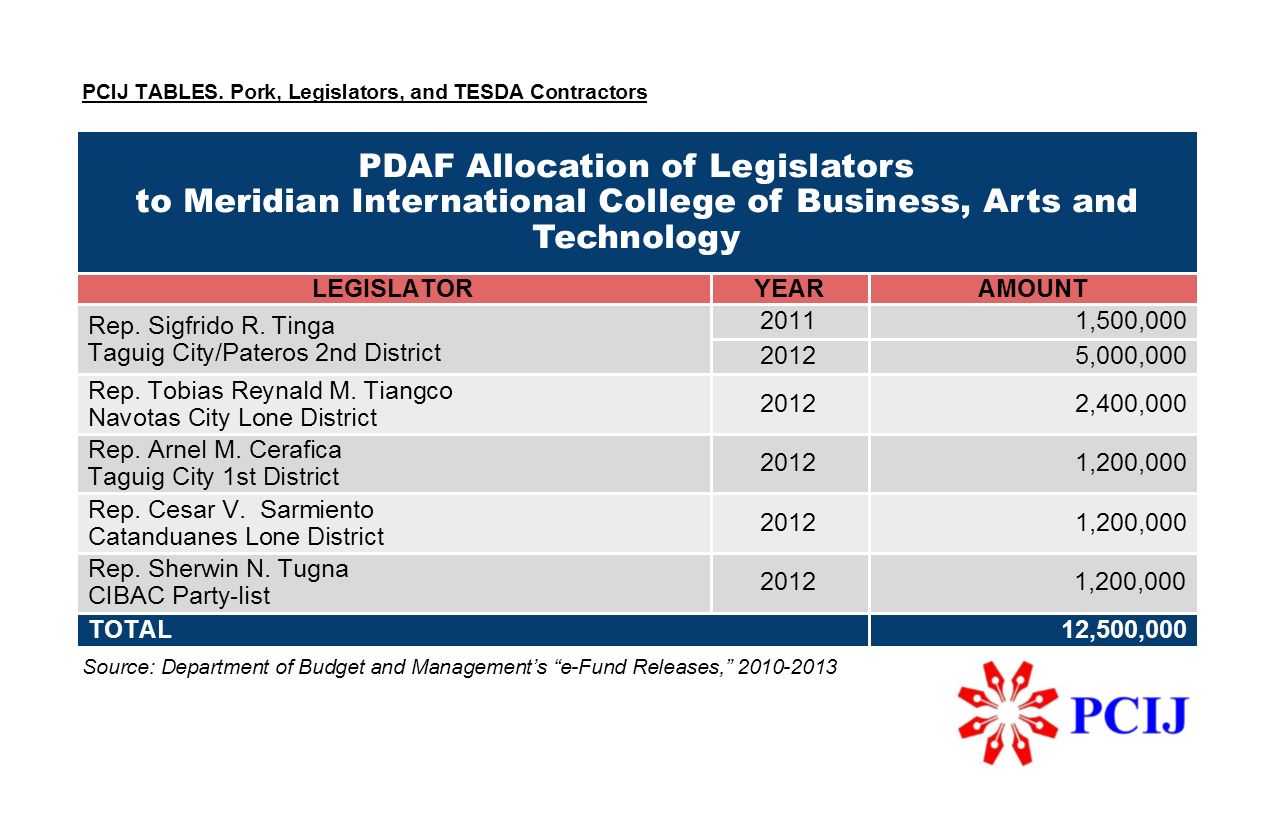 Serbisyong Pagmamahal registered with the SEC on August 13, 2002 and stated these primary purposes: to promote the welfare of barangay officials and service workers, and to engage “in programs that would promote the general welfare of the poor in the 1st, 2nd, 3rd & 4th districts of Quezon City and all brgys., municipalities, cities and provinces comprising the islands of Luzon, Visayas, and Mindanao in the Philippines.”

A resolution unanimously approved by its board on December 29, 2014, however, stated that “the corporation intends to cease operation effective December 31, 2014.”

DBM data on the PDAF releases of legislators show that Serbisyong Pagmamahal along with Bagong Henerasyon Foundation Inc. received from the PDAF of Quezon City 2nd District Rep. Winston Castelo through TESDA-National Capital Region P13 million in 2010, another P4.2 million in 2011, and P10 million more in 2012. 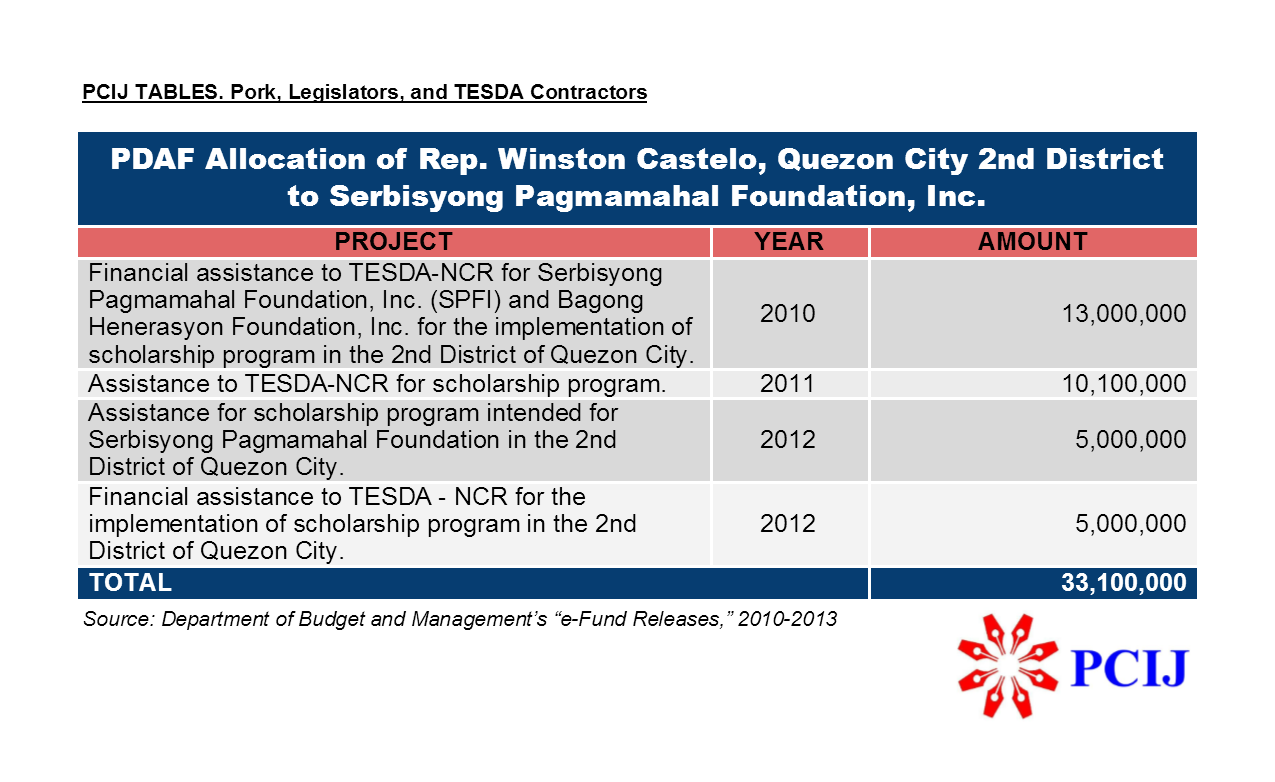 Last week, PCIJ interviewed Ma. Joycelynn L. Rodriguez and Princebini M. Cacnio who said they are both incorporators and board members of the three TVIs. Rodriguez and Cacnio said all three were created to establish and operate training centers that would provide technical vocational education.

DBM data on PDAF releases show that eight legislators had allocated a total of P90.95 million of pork to Asian Touch International Training Institute, Inc. from 2010 to 2012. 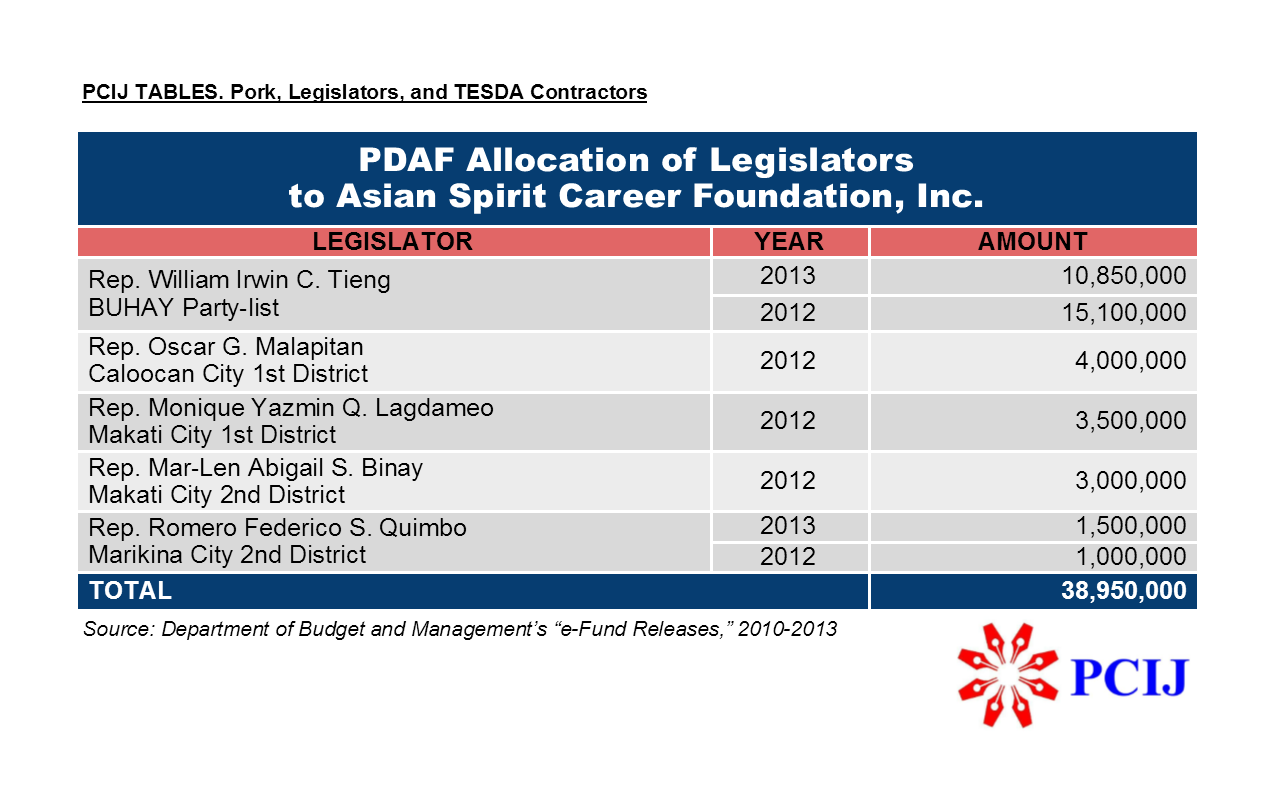 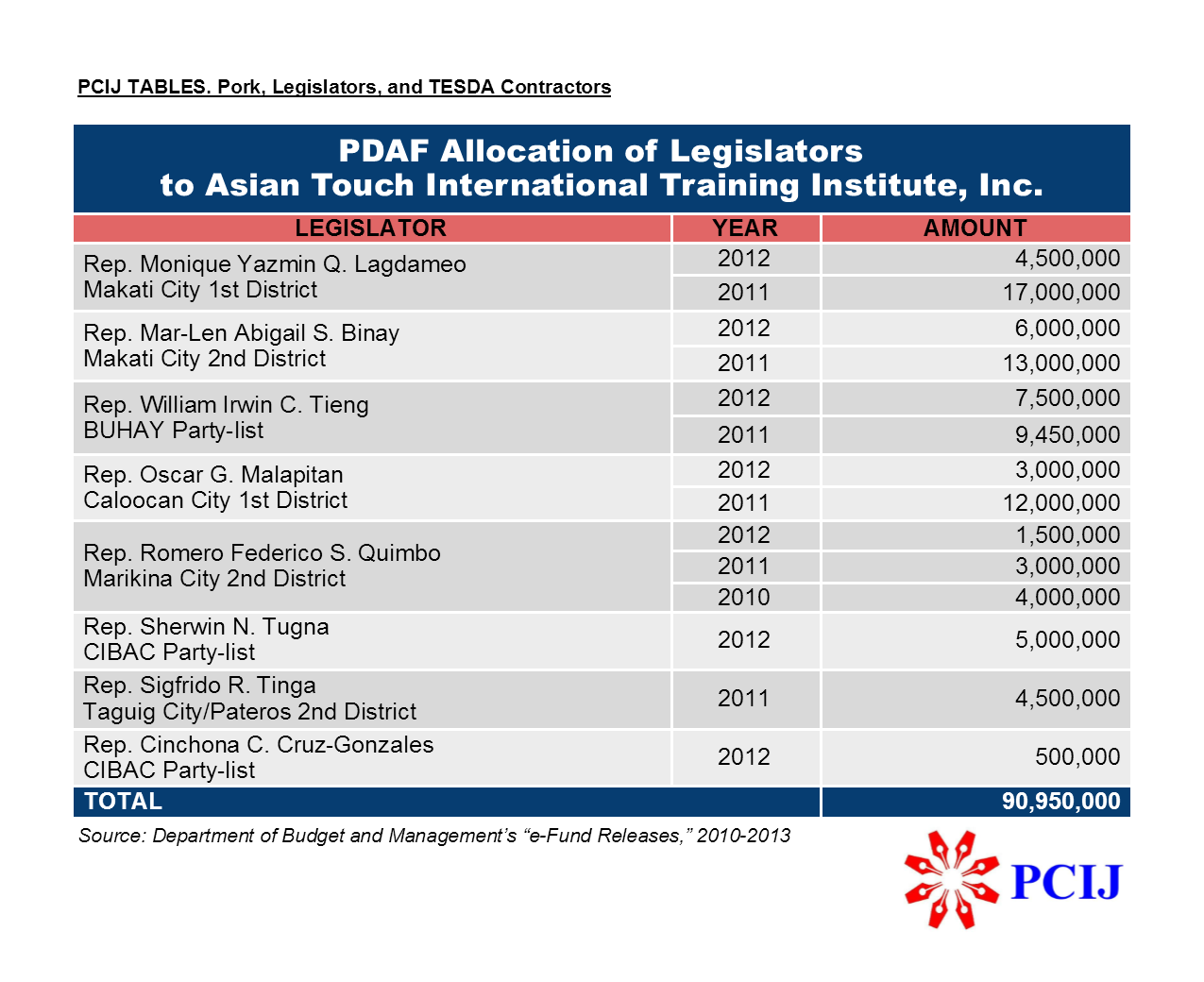 Asian Spirit registered with the SEC on Nov. 7, 2006. Its declared purpose: “To provide humanitarian care services for the physical, intellectual, social and spiritual well-being of our marginalized brothers and sisters.”

TESDA’s website shows that the main training center Asian Spirit is located at 3/F Anciro Bldg. Madlang Sakay St., Silang, Cavite. According to Rodriguez, Asian Spirit engaged in a partnership with Japan-based agencies to send their graduates to Japan for work, and operates mobile technology-based community training and other similar short-term activities. 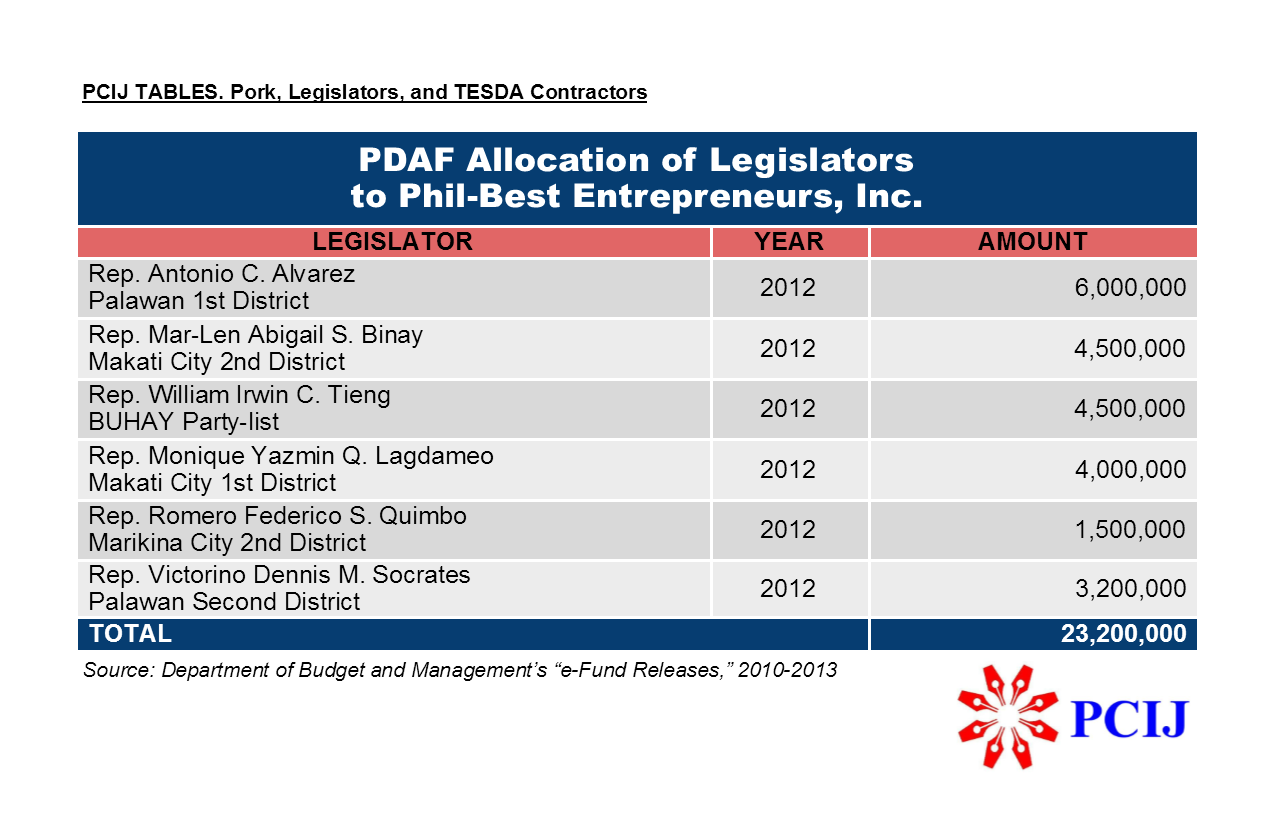 DBM data on PDAF releases show that in 2012, Phil-Best secured a total of P23.2 million in pork funds from six legislators. They include four of those who had also donated to Asian Touch and Asian Spirit: Binay, Lagdameo, Quimbo, and Tieng.