Sure winners, wardens of votes? 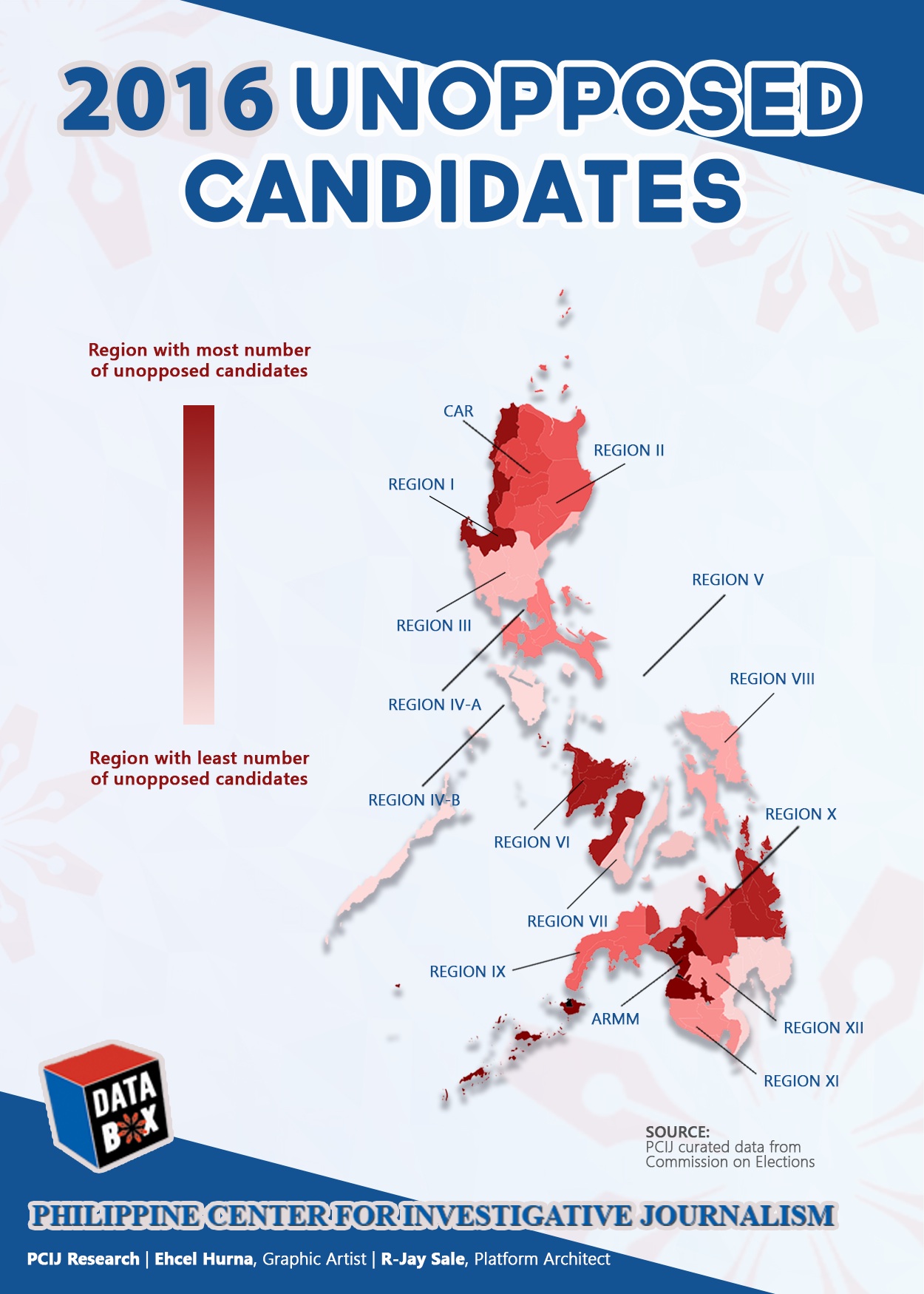 THE IDEAL situation in any election is that two or more candidates fight for a seat, and they earn the votes through the merit of their platform, their track record, and their stand on issues.

In many areas in next Monday’s balloting, however, many candidates are running unopposed, or without any challengers to the throne. With no rival to worry about, it is possible that these candidates have been using their spare time to campaign for local party mates and their party’s national standard bearer and senatorial bets.

PCIJ curated data from the Commission on Elections (Comelec) on the candidates who are more than likely to be occupants of local positions in the next three years, simply because no one is running against them in the upcoming polls.

A total of 802 candidates for local positions – from provincial governor to municipal or city councilors – are running unopposed for the May 9, 2016 elections.

Interestingly, 364 or 45 percent of the 802 names on the Comelec’s list of unopposed candidates are affiliated with the administration Liberal Party (LP), based on their Certificates of Candidacy (COC). 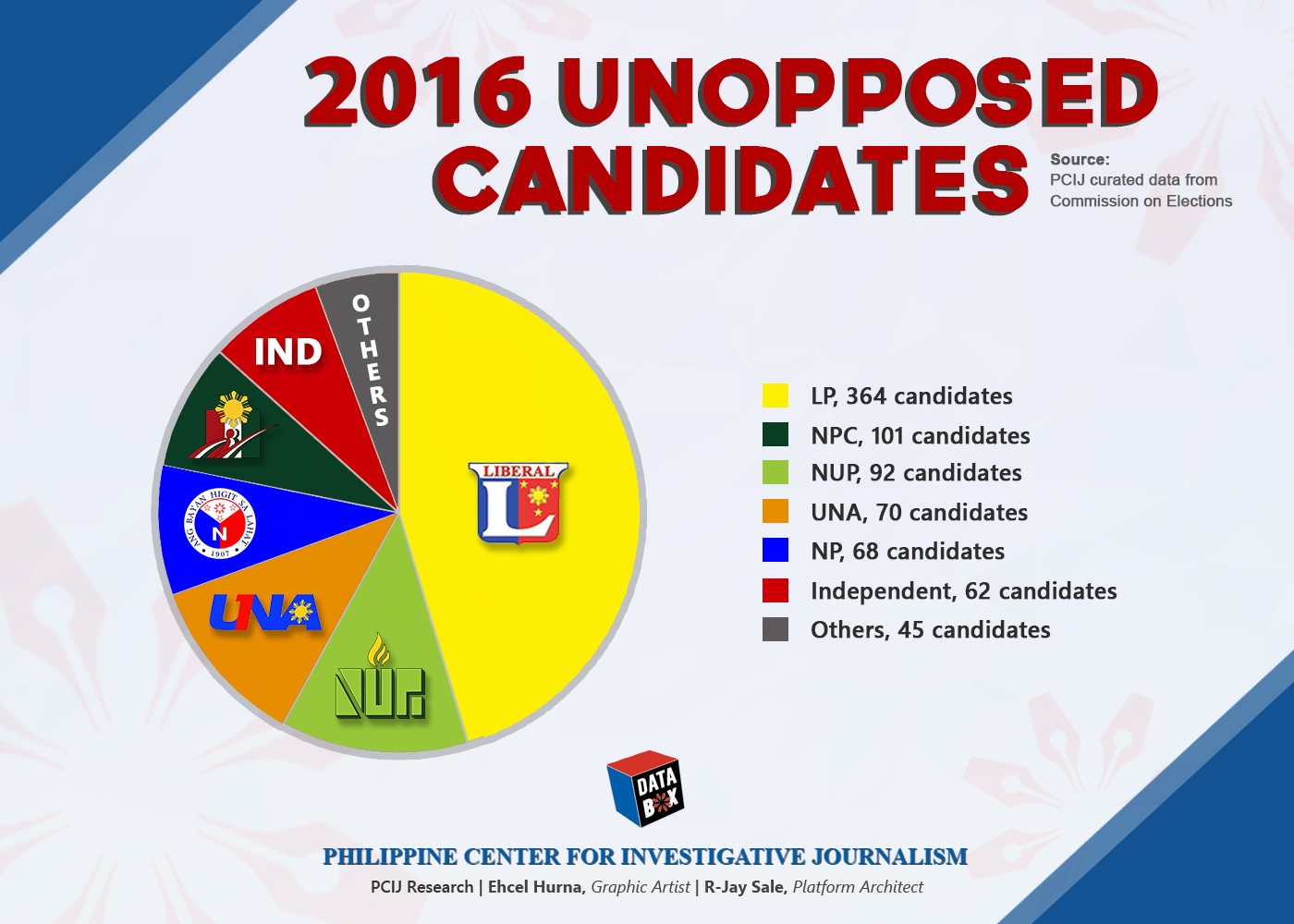 Of course, the willingness of local leaders to deliver votes for particular national candidates could turn into a simple quid pro quo equation. It may be dependent on the ability of the parties to grant what the unopposed politicos want in return. As Center for Local and Regional Governance (CLRG) Director Erwin Alampay points out, it is “not automatic” that unopposed local bets will actually deliver votes for their party’s national candidates.

“They might want to ask for machinery support or campaign donations,” he says, “so that they can conduct proper local campaigns for [national candidates] and their local slates.”

The number of registered voters where unopposed local candidates hold sway, however, may convince national candidates and their parties to do whatever they can to please the local bosses.

As it is, the 215 cities and towns where the mayoralty race has just one candidate have a total of 5,915,756 registered voters. That’s more than 10 percent of the total number nationwide.

A bulk of the unopposed tally in fact can be found at the municipal/city level. Of the total 802 candidates without rivals, 194 are running for municipal mayor, 21 for city mayor, 226 for municipal vice mayor, and 23 for city vice-mayor. More than 30 cities and municipalities also have the same or fewer councilor candidates than there are seats to be filled, resulting in 250 candidates for councilor running unopposed.

“It is always good to have opposing voices in the local leadership, and that strives if candidates are from different parties,” says Alampay. “But in the case of unopposed slates, alternative voices may be shut off in the discussion of the local council.” 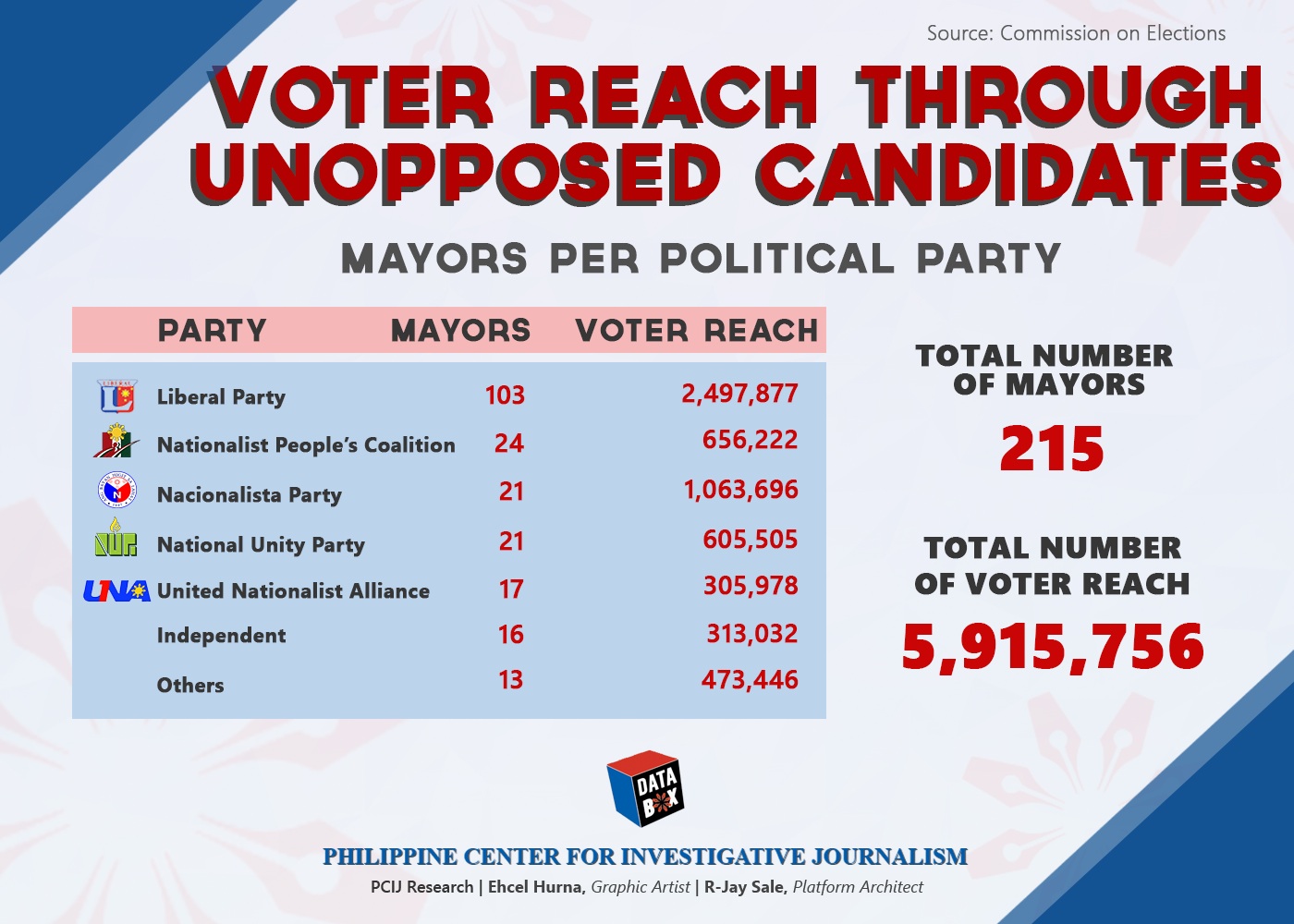 In any case, it is LP that has more candidates for mayor running unopposed: 103. The municipalities and cities where these candidates are running have a total population of 2,497,877 registered voters.

NPC is a far second in terms of its number of unopposed mayoralty candidates: 24. And even then, the cities and towns were these candidates are running have a lower number of voters – 656,222.

In contrast, the 21 unchallenged mayoralty candidates of NP represent 1,063,696 voters.

NUP also has 21 unopposed bets for mayor, but the cities and municipalities where they are running have only a total number of 605,505 voters.

UNA has 17 mayoralty candidates without rivals in cities and municipalities that have a total of 305,978 voters.

Of course, aside from their own unopposed bets for mayor, the national political parties can also reach out to the independent candidates. Sixteen of these independents are running unopposed as mayors, with their respective bailiwicks having a total of 313,032 voters altogether. (The smaller parties, meantime, have managed to have 13 unopposed mayoralty bets as well, with their cities and municipalities having a total of 473,446 registered voters.) 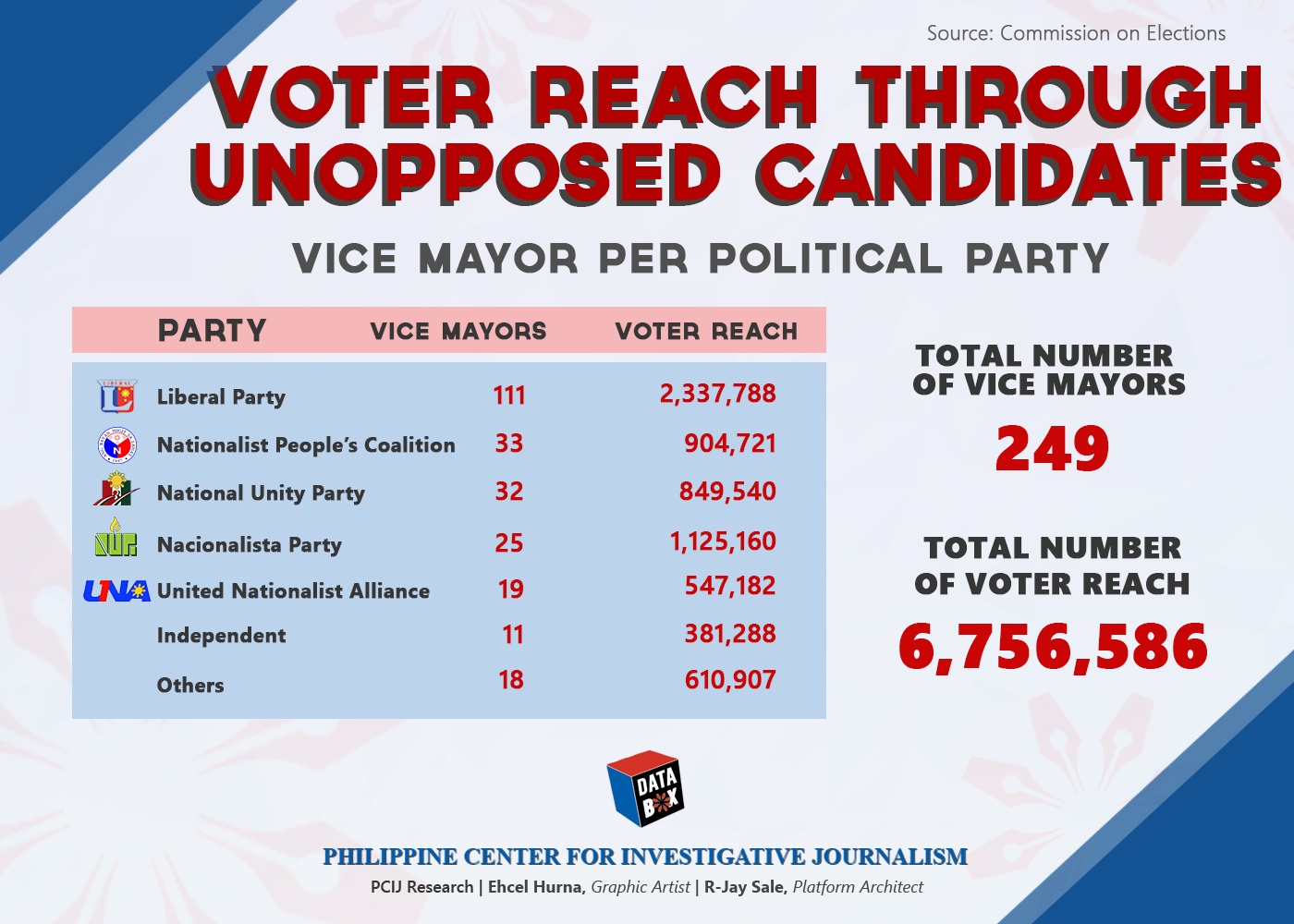 Other possible helping hands that the national parties and candidates can seek are those of candidates for vice mayor who are running unopposed. Although their political clout may not be as strong as the mayoralty bets, these unchallenged vice-mayoralty candidates most probably have their own circle of loyal supporters among their town or city’s voters.

All in all, the 249 unopposed candidates for vice mayor can bring as much as 6,756,586 registered voters to the election table.

Eleven candidates for vice governor are also running unopposed across the nation, 33 for the Sangguniang Panlalawigan member, and 32 for district representative. 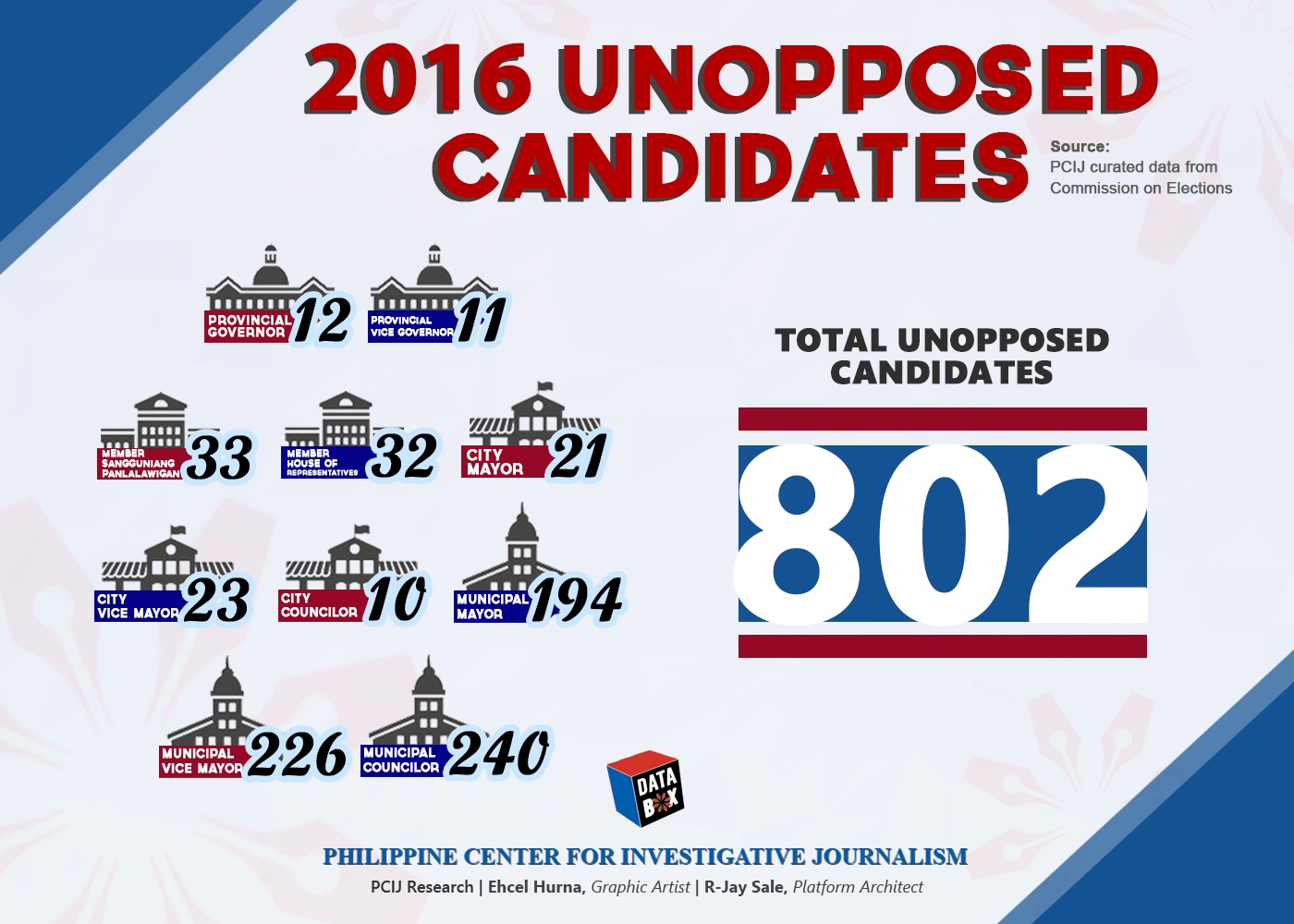 A bounty in ARMM

Among the regions across the country, the Autonomous Region in Muslim Mindanao (ARMM) has the most number of unopposed candidates followed by Ilocos Region with 94, Region VI (Western Visayas) with 79, Caraga region with 53, and Region X (Northern Mindanao) with 50.

Metro Manila or the National Capital Region (NCR) is at the bottom of the region roster with only 11 unopposed bets, closely followed by Bicol Region with just 15 unchallenged candidates.

Twelve provinces – six from Luzon, two from the Visayas, and four from Mindanao – have only one candidate each signed up for the gubernatorial race in the upcoming elections: Bataan, Pampanga, Camiguin, Agusan del Sur, Dinagat Islands, Davao Occidental, Biliran, Apayao, Mountain Province, Ilocos Norte, Ilocos Sur, and Negros Occidental. < strong>– PCIJ, May 2016