And the clans play on...

AMONG THE 802 unopposed candidates for the 2016 elections, a few stood out not just because their surnames sounded familiar, but also because of the frequency in which these kept popping up.

Four surnames – Ampatuan, Ecleo, Midtimbang, and Sinsuat – came up five or more times on the Commission on Elections’ list of unopposed candidates in their respective bailiwicks.

This means these clans already have at least five sure seats in their localities that they will occupy for the next three years.

They could have more, of course, partly because all four of these families have other members standing for various local posts, albeit with competitors.

Three of the surnames showed up on the list of unopposed candidates in Maguindanao: Midtimbang nine times; Sinsuat six; and Ampatuan five. Ecleo came up five times on Dinagat Islands’ unchallenged roster.

The clan, however, also has other members running in the provincial level, as well as in the localities of Talitay and Guindulungan.

A total of 19 Midtimbangs are running for office in Maguindanao this year, which, if they are all lucky, could result in as much as 19 local seats for the family. 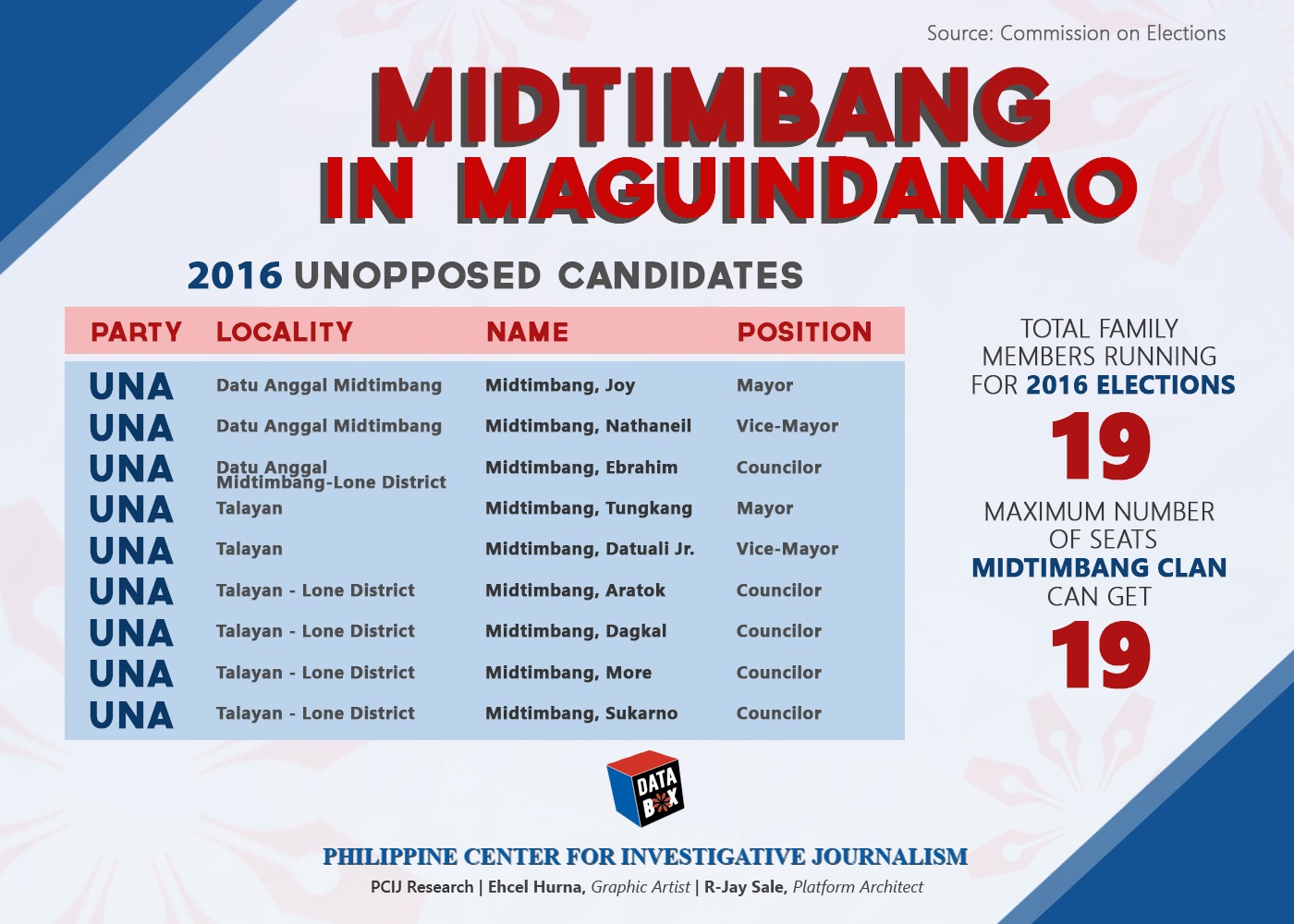 Five members of the Ampatuan clan, meanwhile, are running unopposed in the towns of Datu Hoffer Ampatuan and Datu Odin Sinsuat.

Other members of the Ampatuan clan are also gunning for seats – but with challengers — in the Sangguniang Panlalawigan or provincial council, as well as in the towns of Datu Abdullah Sangki, Datu Unsay, Mamasapano, Parang, Rajah Buayan, Shariff Aguak, and Shariff Saydona.

In fact, four Ampatuans are fighting for the mayoralty seat of Shariff Aguak, and three for the office of vice mayor. In this race, candidates of the opposition UNA are pitted against the official bets of the administration, the Liberal Party (LP) headed by President Benigno S. Aquino III.

Anhara Ampatuan (UNA) is up against Akmad Ampatuan (LP) and Datu Puti Ampatuan (Independent) over the vice-mayoralty post.

LP’s candidate for vice mayor, Akmad Ampatuan Sr., is a close relative of the late Andal Ampatuan Sr., the principal accused together with his son Zaldy in the “Maguindanao Massacre” of Nov. 23, 2009 where 58 persons, including 32 media workers, were killed.

A brother-in-law of the Ampatuans, Akmad is one of the accused in the massacre. In March 2015, however, he was admitted into the government’s Witness Protection Program.

Akmad, Andal Sr., Andal Jr., and Zaldy were all elective officials in Maguindanao when they were arrested for the massacre in 2009. But then Justice Secretary Leila de Lima cited Akmad as “one of the major witnesses” in the second wave of complaints against 50 new suspects in the massacre, “including 14 Ampatuans, four of them incumbent mayors in Maguindanao.”

UNA’s Bai Anhara Ampatuan, meanwhile, is a re-electionist and daughter of Anwar and Zahara Ampatuan. 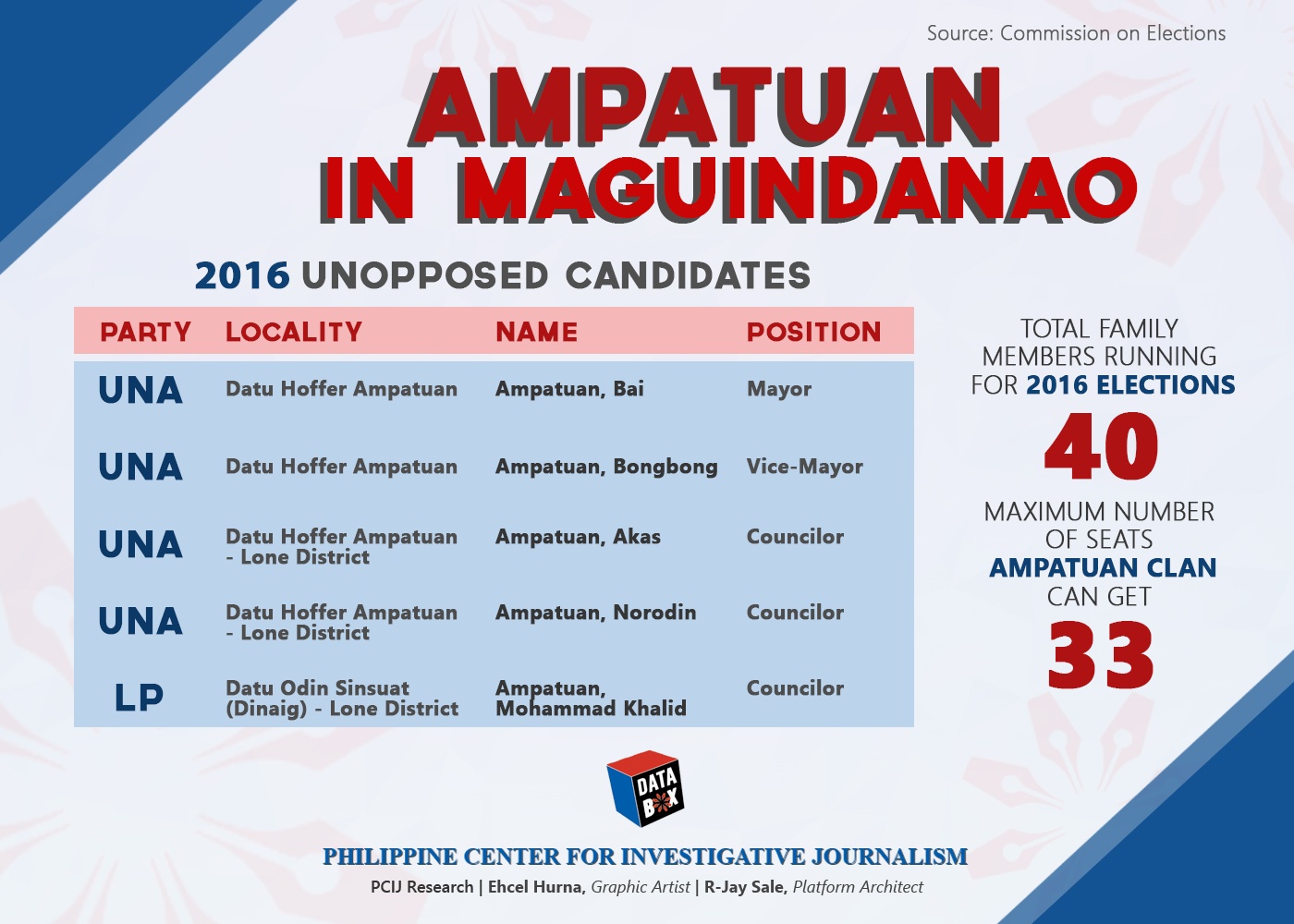 Unlike Akmad, UNA’s candidate for Shariff Aguak town mayor, Sajid Ampatuan, remains a principal accused in the multiple murder case that government prosecutors filed over six years ago, on account of the massacre. A former vice governor, Sajid is out on bail. His wife Zandria Sinsuat-Ampatuan is running for a third term as mayor of Shariff Saydona town.

Sajid’s rival bets are close relatives: his cousin, incumbent mayor Maroph; his nephew Oping; and sister-in-law Zahara, a former mayor and the wife of his elder brother Anwar.

In total, 40 Ampatuans are running for the 2016 elections in Maguindanao, and the family can get as much as 33 local seats there.

The Ampatuans are also relatives, either by blood or affinity, of the Sinsuat, Midtimbang, Sema, and Datumanong clans.

Generations of the Ampatuans and the Mangudadatus, meanwhile, had been close political allies until Esmael “Toto” Mangudadatu ran and won as Maguindanao governor against the Ampatuans’s wishes, in the May 2010 elections. 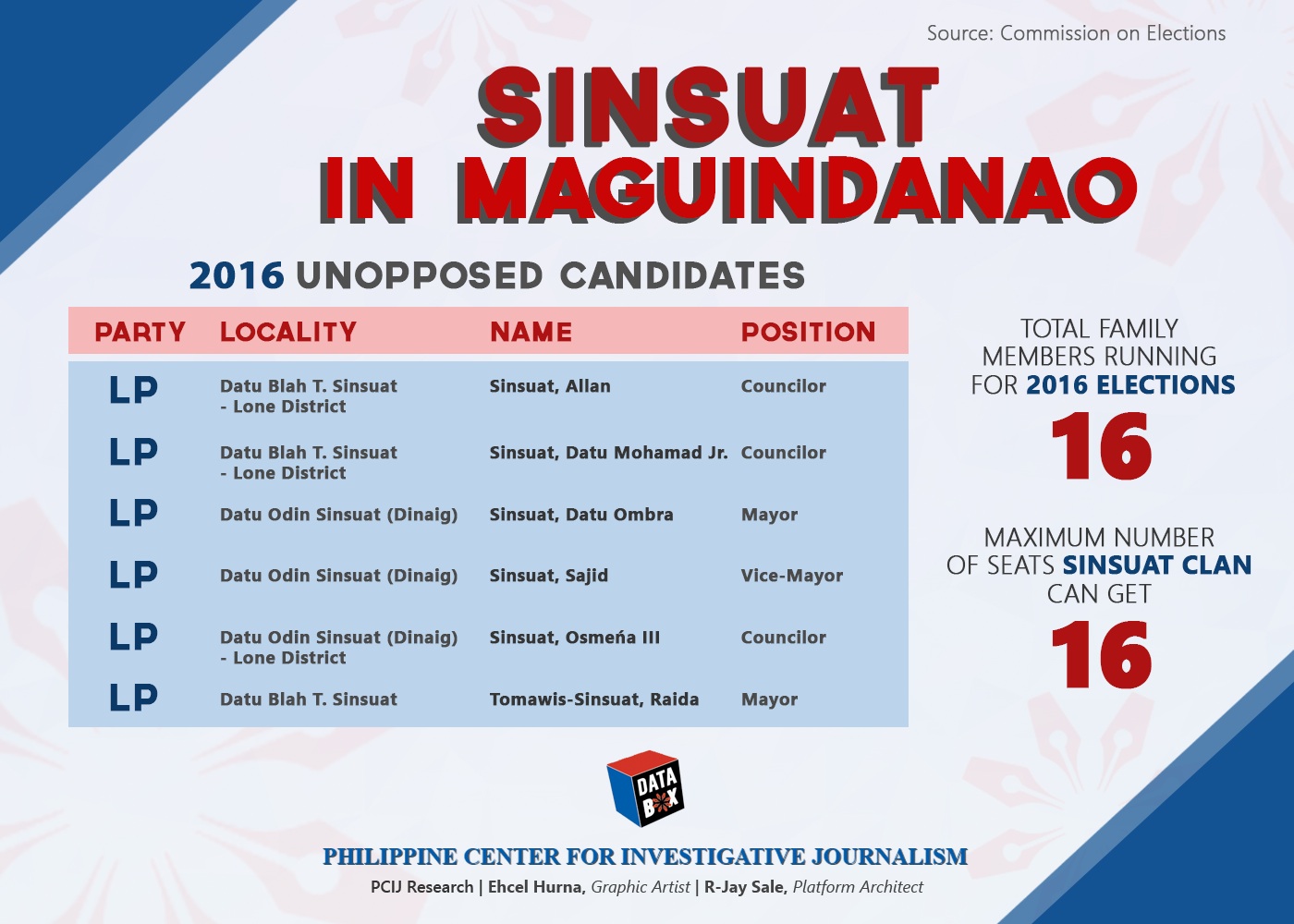 The royal clan of Sinsuat itself has six unopposed bets in Datu Blah T. Sinsuat and Datu Odin Sinsuat in Maguindanao. All the unchallenged Sinsuats are running under the LP.

Ten other Sinsuat family members are aiming for seats in the provincial level, as well as for a variety of posts in Cotabato City, Datu Blah T. Sinsuat, Datu Saudi Ampatuan, Kabuntalan, Shariff Saydona, and Upi.

In the Dinagat Islands, also in Mindanao, the Ecleos are running without rivals for governor, as well as for mayor in three towns, and vice mayor in one municipality. 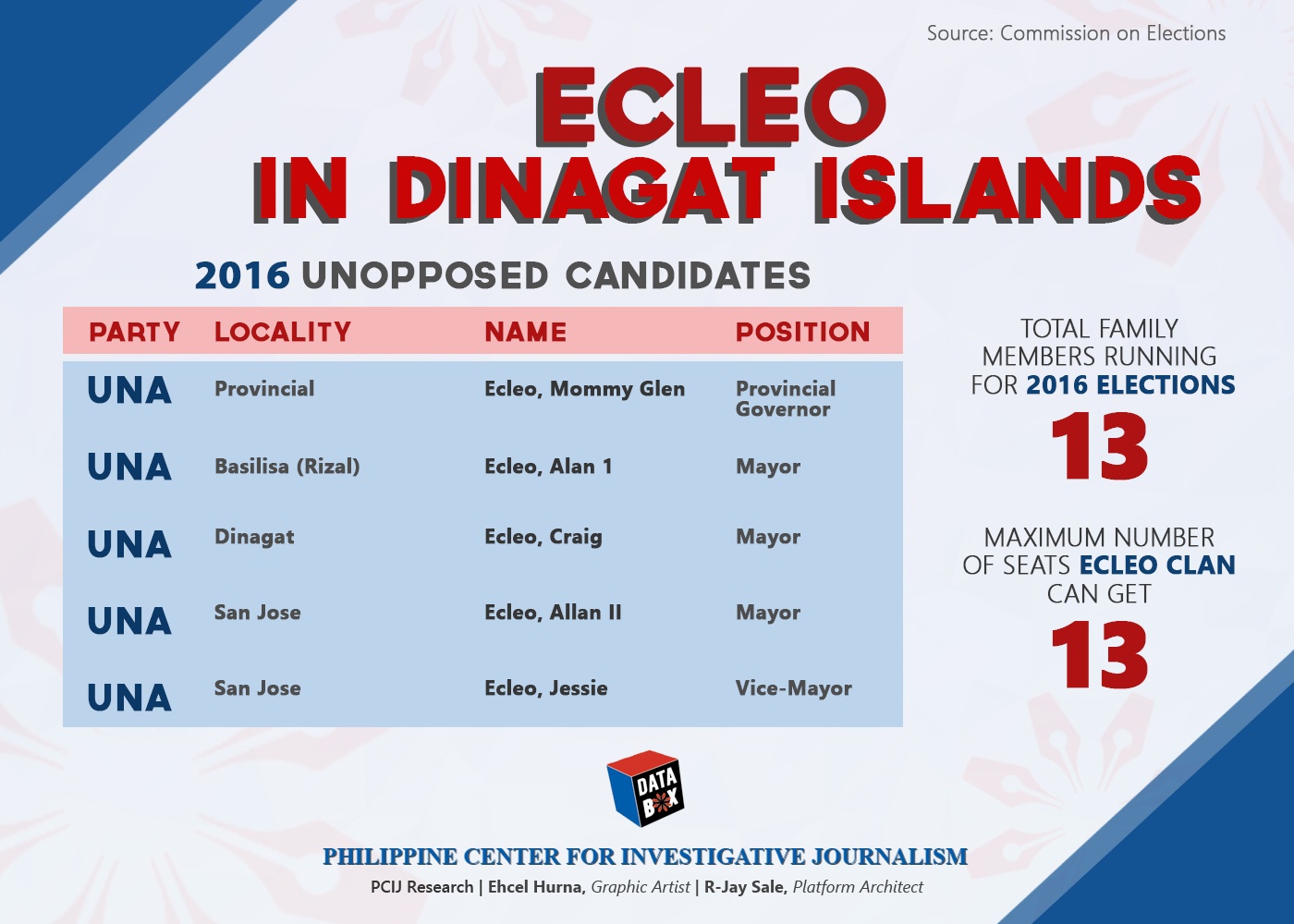