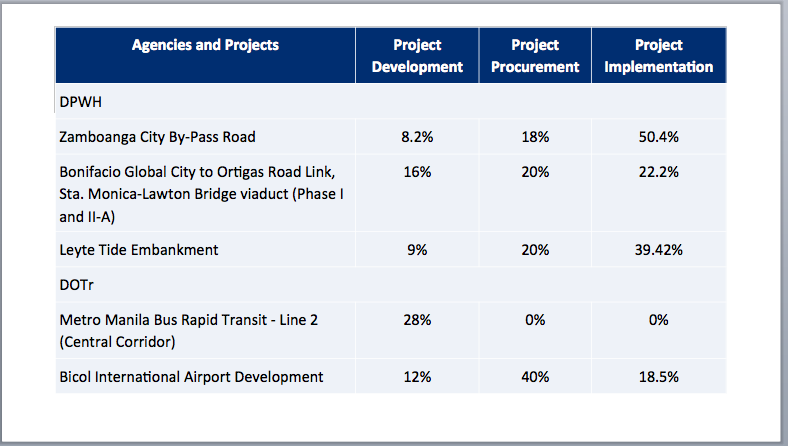 The Affiliated Network for Social Accountability in East Asia & Pacific Foundation, Inc. (ANSA) is a non-stock, non-profit corporation registered under Philippine law. It provides a networking and learning facility for social accountability stakeholders and practitioners. It empowers people by facilitating constructive engagement with the government in monitoring the use of public resources, based on the assertion of rights and geared toward better service delivery and promotion of community welfare.

ANSA has established geographical presence by organizing seven convener groups in four countries: Cambodia, Indonesia, Mongolia, and the Philippines. It has covered various thematic issues, such as public procurement, extractive industries, youth and children, education, infrastructure, and recently, social protection and PWD. It also has partnerships in Myanmar, Vietnam, Afghanistan, and the South Pacific.

ANSA has implemented projects that promoted the use of evidence-based participatory tools, such as for budgeting, public-expenditure tracking, citizen report card, community scorecard, and audit. Among its most innovative and most replicated projects are the Citizen Participatory Audit (CPA) with the Commission on Audit, and CheckMySchool(CMS) with the Department of Education.

The Duterte administration’s Build, Build, Build (BBB) program is estimated to cost PhP8 trillion over the next five years. As of April 2018, 18 projects worth PhP462.7 billion have been approved. Eight of these projects, accounting for around 64 percent of those approved, are in Metro Manila. In a policy forum, economist Emmanuel De Dios pointed out underperformance in infrastructure spending. There were also news reports about projects encountering glitches, delays, and other inefficiencies, not to mention anomalies.

BBB is such a massive program that promises many things, including economic gains, jobs, traffic decongestion, among others. In view of this, the public must be fully informed about how the projects are being developed, their progress in implementation and, more importantly, if they are achieving target results. The public must be adequately alerted and consulted on ways to address program issues and its overall direction. 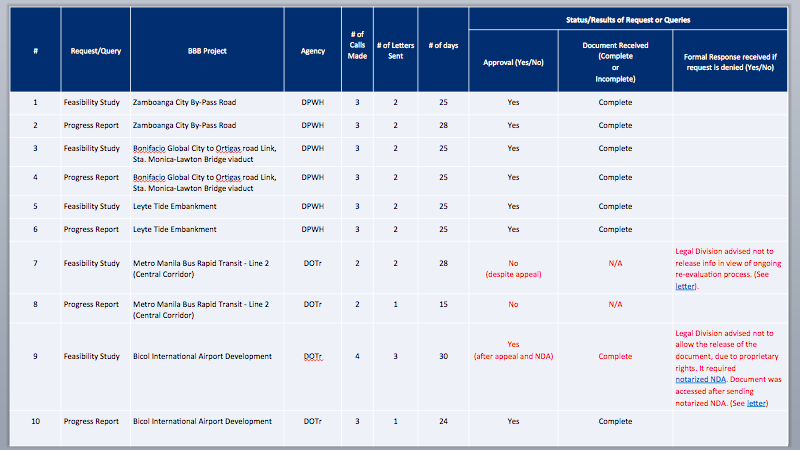 This FOI Practice focused on BBB aimed to test access to (a) feasibility studies, and (b) progress reports of selected BBB projects, which are implemented by the Department of Public Works and Highways (DPWH) and Department of Transportation (DOTr).

DPWH and DOTr were selected in view of their crucial role in the BBB program. The targeted areas were spread out in NCR, Luzon, Visayas, Mindanao, with sampled projects in varying degrees of reported accomplishment at different stages of operation. The sampling was expected to show level of ease or difficulty in securing information depending on the stage of project operation. These stages are: project development, project procurement, and project implementation. Information regarding project status was derived from the government’s official website on BBB projects.

As of August 15, 2018, when this round of FOI Practice was being prepared, the official status of the selected projects was as follows:

Note that after more than three months — as of December 4, 2018 — none of the information on the status of these same projects has changed, as reported in the BBB website. Either none of the projects has moved/progressed or the website is not being updated.

The Annex: FOI Practice Results Matrix provides a summary of ANSA EAP’s FOI practice experience with the DPWH and the DOTr.

After more than three months, and up to 30 working days of engagement with the agencies, our FOI Practice yielded the following results:

• All of the six documents requested from DPWH were approved for release, while only two out four requests were approved by DOTr. DOTr released one of the two approved documents only after the requester submitted a notarized Non-Disclosure Agreement (NDA).

• Neither of the two agencies complied with the 15-working-days time allowance. The requested documents were made available within the extended time of 24-30 working days. Note that the agencies did not make any official request for extension.

• Most of the DPWH documents were given in hard printed copy. Electronic copy was requested, but it was not available or could not be made available by the FOI Receiving Officer. Given the bulk of the documents, their sharing and distribution has been difficult for the researchers.

• The Metro-Manila Bus Rapid Transit – Line 2 is undergoing a re-evaluation process. Apparently, the Asian Development Bank has raised some issues on the intersection along EDSA. DOTr did not furnish copy of the requested documents because of these pending questions on the project. Further, it considers information in this stage as privilege and a recognized exception. In its response letter, DOTr says:

“[I]t appears that the subject, which are still under evaluation by other Government agencies, partake the nature of an information or document comprising drafts of decisions, orders, rulings, policy and decisions memoranda that are addressed to the Government Officials concerned who are yet to finalize its recommendation and decision whether to approve or disapprove the projects. Hence, pending the decision or resolution of these Government agencies on the approval or disapproval of the projects, the same cannot yet be disclosed or disseminated to the public.”

• The DOTr initially denied the request for a copy of the feasibility study of the Bicol International Airport, due to proprietary rights. According to its Legal Division, “the DOTr, being the recipient of these documents has the right to safeguard its trade or industrial secrets against competitors of said individuals, consulting firms and institutions as well as the public. Otherwise, such information, if disclosed or disseminated can be illegally and unfairly utilized by other business competitors who, through their access to those business secrets, may use the same for their own private gain and to the irreparable prejudice of the owner of the said ‘documents’.”

After appealing the decision, the DOTr negotiated a condition for the release of the document, which was for the requester to sign and notarize an NDA. The requester complied with the condition, which made the agency release the document.

ANSA EAP distilled several keen observations from this round of FOI Practice.

First, the length of time (24-30 working days) before the agencies released the requested documents and the printed format by which they were provided indicate the agencies’ low level of readiness to comply with the demands of the FOI policy. While DPWH was cooperative and responsive to the requests, it took so long to locate, prepare, and physically provide the documents. For DOTr, it appears to be a case of both low-level readiness and high resistance to execute the access-to-information directive. The internal deliberation its FOI officers that went through its lawyers before a decision was made on the merit of the request and the time consumed for back-and-forth communication, including the appeal, made access difficult and tedious.

Second, the DOTr’s BRT in NCR presents a unique case because it is still in the early project development stage, where information may still be raw or has yet to be finalized. On this basis, the ongoing re-evaluation process was cited as the reason for the agency’s inability to provide information on the project. It is important to note, however, that information from a discussion, re-evaluation, or draft document on plans for government service delivery projects has great public value as it affects key project implementation decisions.

The Legal Division’s claim of exception for this type of information is merely an opinion and must thus be challenged. When does information become privilege and qualify as state secret? The tentative or unpolished characteristic of project information cannot serve as basis for it. There is more benefit than danger in publicly sharing the way projects are being developed as it invites more ideas and better innovations. Planning and project-development activities are not supposed to be secretive, and have long been opened up to participatory processes. Information generated during this stage should be made accessible to the public.

Agency officials still dictate the rules on what information to disclose, and when, how, or why to disclose. It is important to understand what prompted DOTr to deny access to the feasibility study. Is the protection of proprietary rights a valid reason? How should contractor’s proprietary rights to financial information, intellectual property (concepts, designs, technique), and other technical documentation be handled in publicly funded projects? Why did DPWH release the same documents while DOTr did not?

Finally, the DOTr’s condition of signing the NDA is arguably tantamount to denial. It eventually released the document to the individual requester after complying with the condition, but its use must be limited to the individual. As the agreement implies, the individual requester cannot disclose it further to anyone. Journalists who secured this information, for instance, cannot use it in any of their news reports. Does individual consumption of information fulfill the requirement of access to information? Obviously no, because publicity is the spirit of access to information. Constraint on the public use of information defeats the right to, and the freedom of, information. The condition of signing a non-disclosure agreement must be stopped.

• The Cabinet Secretary should require agencies to have electronic copy of all documents and introduce protocols on storage and public sharing of these electronically accessible files.

• State and reiterate as policy the public’s claim to all government project information in all stages of project operation, namely: project development, procurement, and implementation. Information from deliberations, planning, and other preparatory work are crucial information that must be documented and shared with the public.

• Clarify the proprietary rights over certain information owned by contractors in a publicly funded project.

• Instruct agencies to cease from requiring requesters to sign NDA as a condition for the release of documents and inform the public about the untenability of the NDA condition. — ANSA-EAP, Right to Know, Right Now! Coalition, December 2018