JUSTICE Secretary Vitaliano Aguirre II, in a message relayed to the media by Presidential Spokesperson Ernesto Abella, on Saturday denied that the Department of Justice (DOJ) had received a request for data on the drug war from PCIJ and the Free Legal Assistance Group (FLAG).

Both Aguirre and Abella apparently do not know whereof they speak, or should have checked their facts and documents first.

Abella issued the denial on behalf of Aguirre, in response to a query from GMA Network. Abella said: “According to DOJ Secretary [Vitaliano Aguirre II], they have not received such requests, and should there be such requests it must conform with FOI guidelines.”

“It is our opinion,” Abella added, “that the Duterte administration continues to abide by the perimeters we have set for ourselves.”

People may lie or evade or parse the truth, but documents often speak with more certitude and integrity.

The first request letter was received by Aguirre’s own staff at the Office of the Secretary on Aug. 9, 2016. It was forwarded on Aug. 24, 2016 to the DOJ Planning and Management Service headed by OIC Director Ryan Thomas. It might help Aguirre to know that Thomas’s contact number is 526-2747.

A follow-up letter from PCIJ and FLAG was received by the Office of the Secretary-DOJ on Sept. 1, 2016.

Here are the PCIJ-FLAG request letters for data on the drug war that had been received by Aguirre’s office: 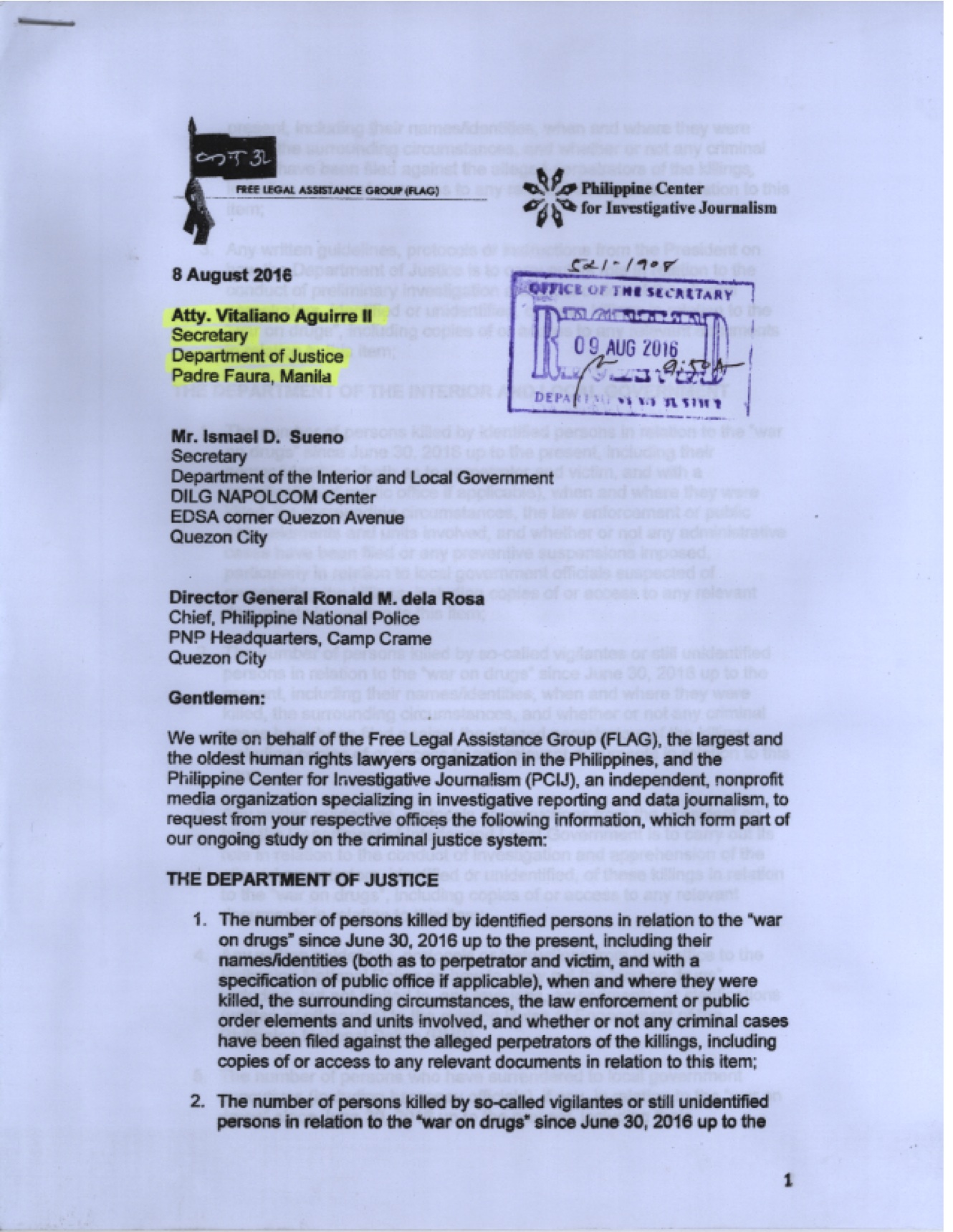 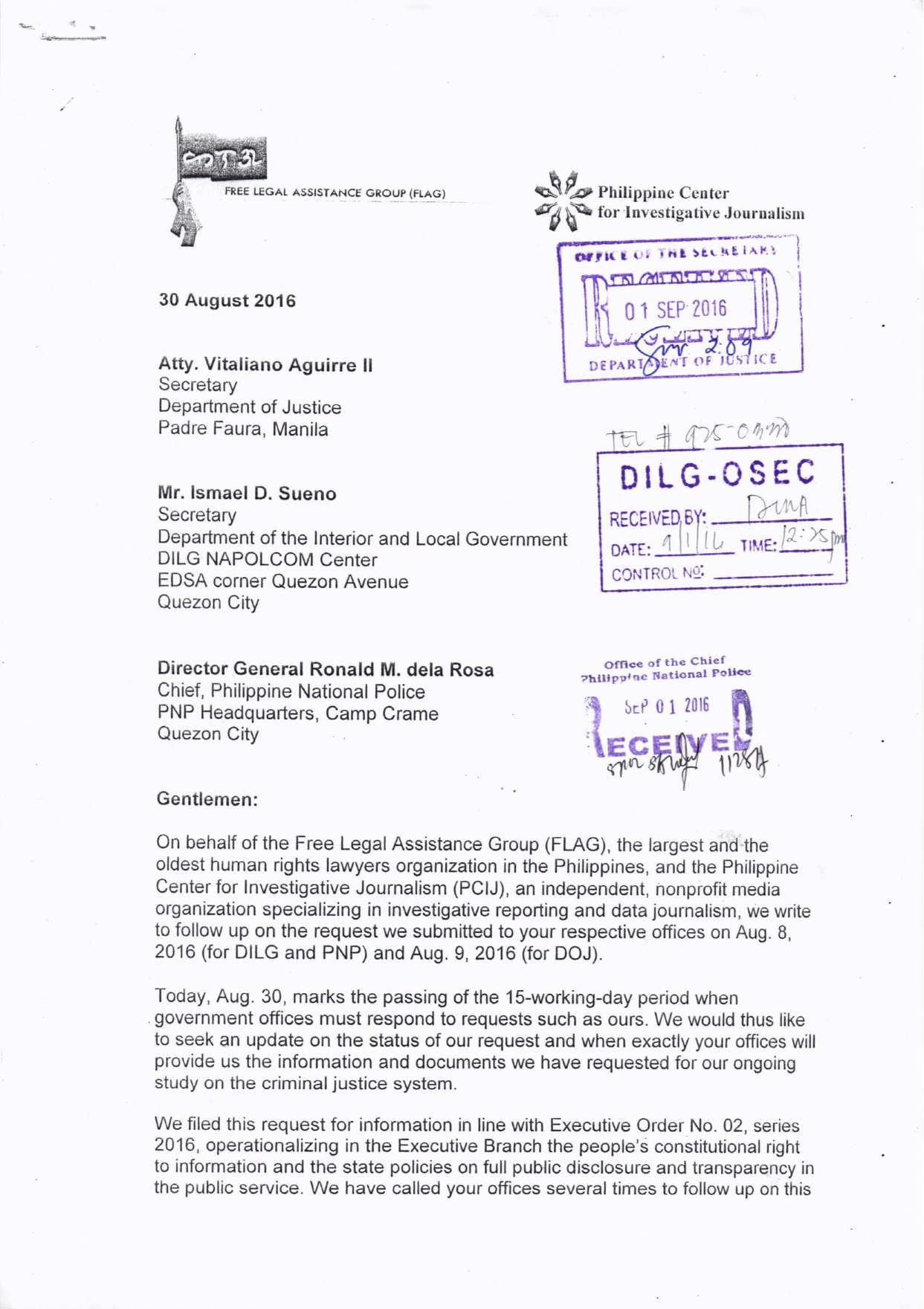 On Friday, PCIJ ran a story about the request it had filed together with FLAG titled “FOI request on drug war data: PNP, DILG, DOJ won’t open up.”

The request was submitted by PCIJ and FLAG to the three agencies on Aug. 8 and 9, 2016, on the basis of Executive No. 2 instituting Freedom of Information in the executive branch that President Rodrigo R. Duterte signed on July 23, 2016. PCIJ and FLAG sent a follow-up letter dated Aug. 30, 2016 to the same agencies.

PCIJ’s story on Friday detailed how after six letters, six visits, and 26 phone calls across a 40-day period, the DOJ, PNP, and DILG have yet to respond fully and promptly to the FOI request filed by PCIJ and FLAG.

Here is PCIJ-FLAG’s request letter received by the PNP: 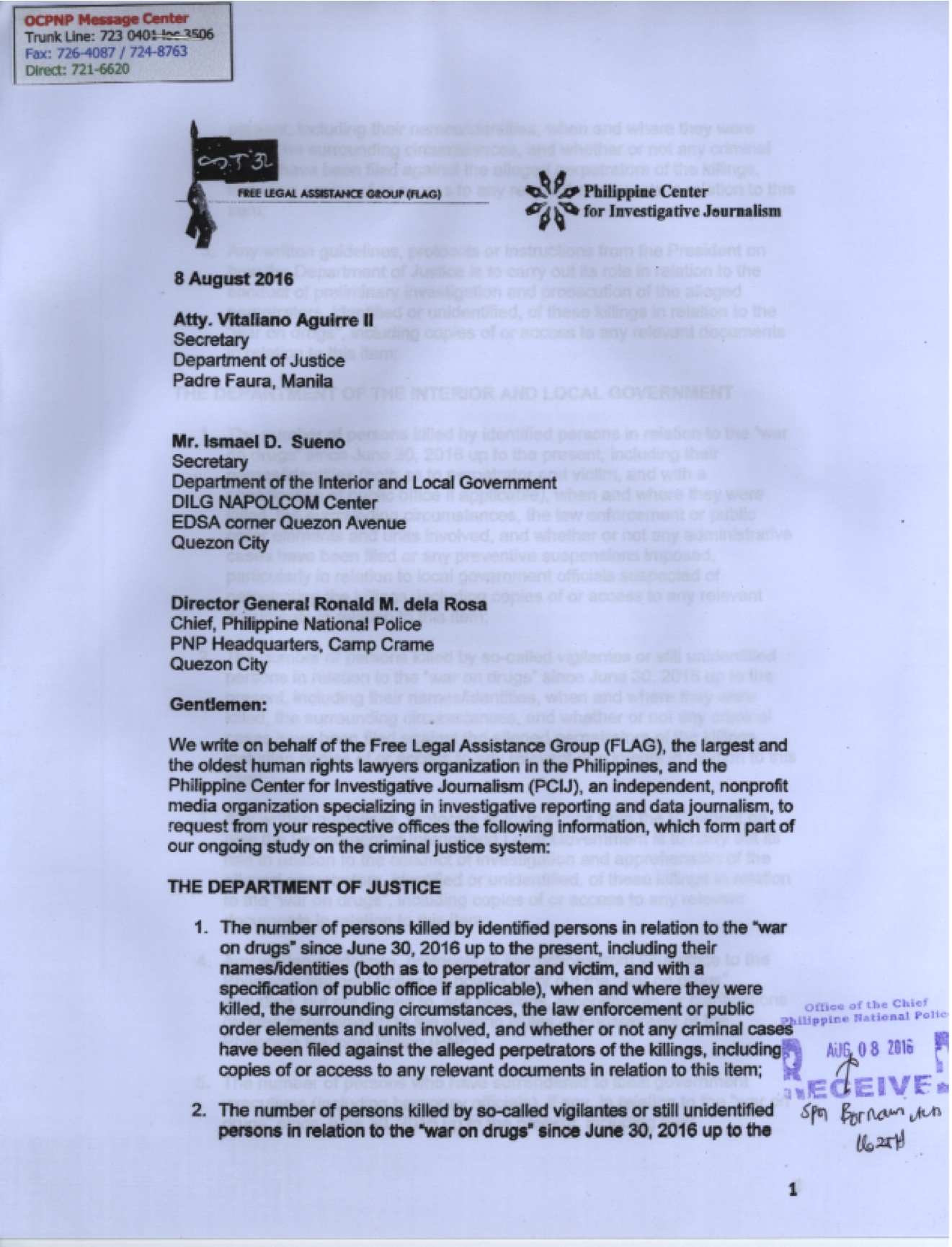 A two-slide powerpoint file that PNP sent in response to PCIJ-FLAG’s request letter:

A memorandum from the PNP-IAC referring PCIJ-FLAG’s request letter to the PNP Planning and Management Service: 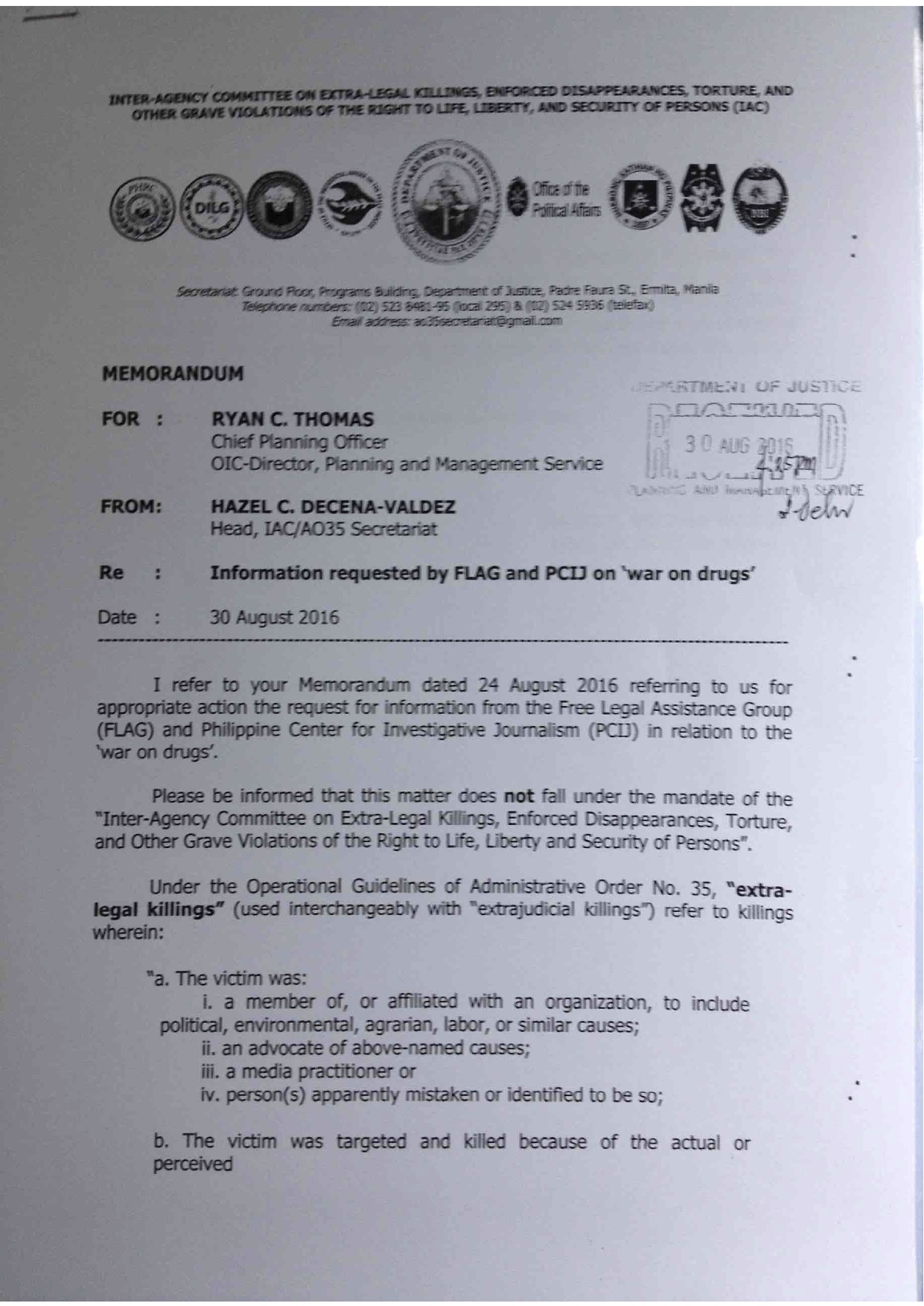 Here is PCIJ-FLAG’s request letter received by the DILG: 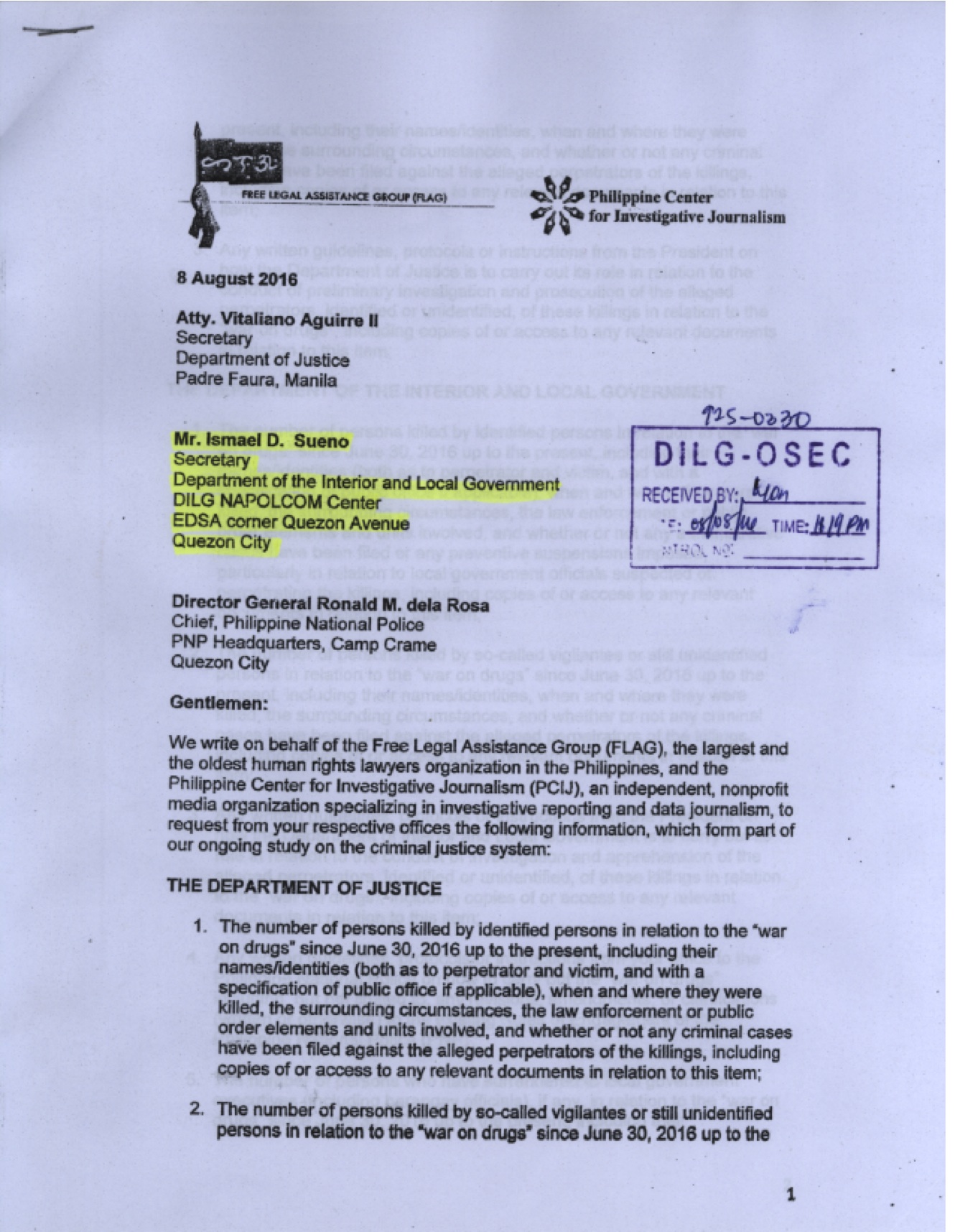 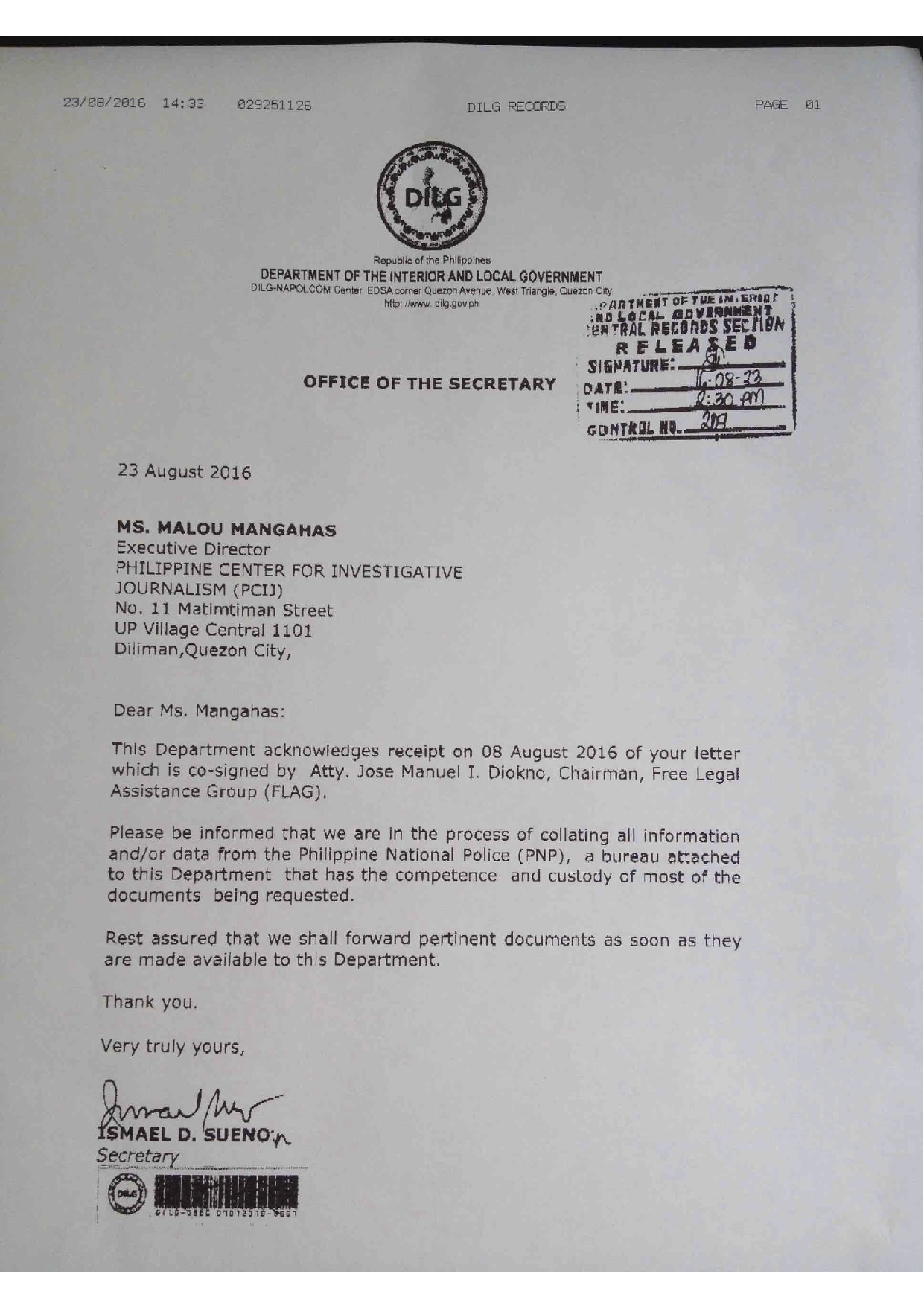 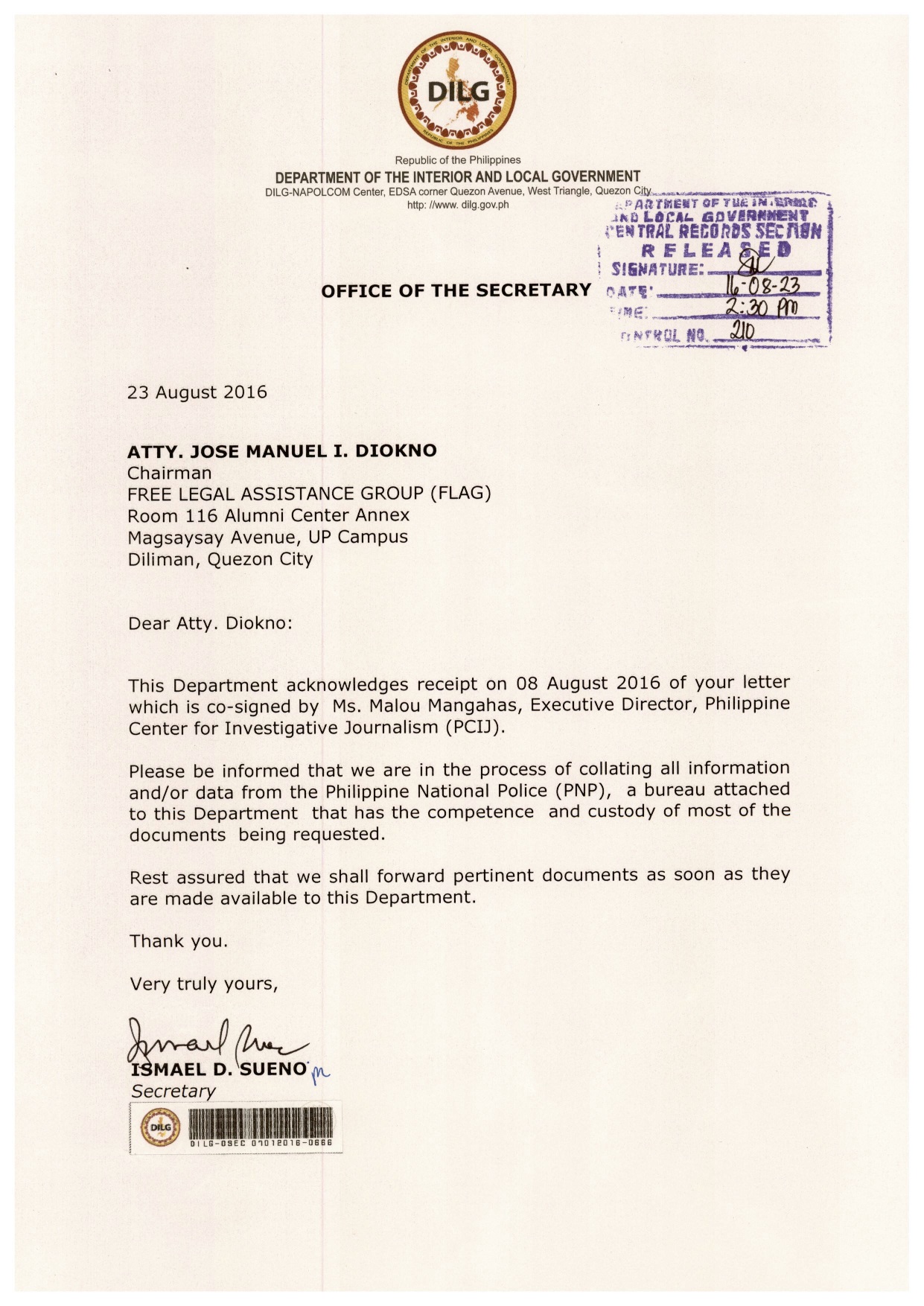 Here are the pages of the PCIJ-FLAG request letter stamped received by the other agencies: 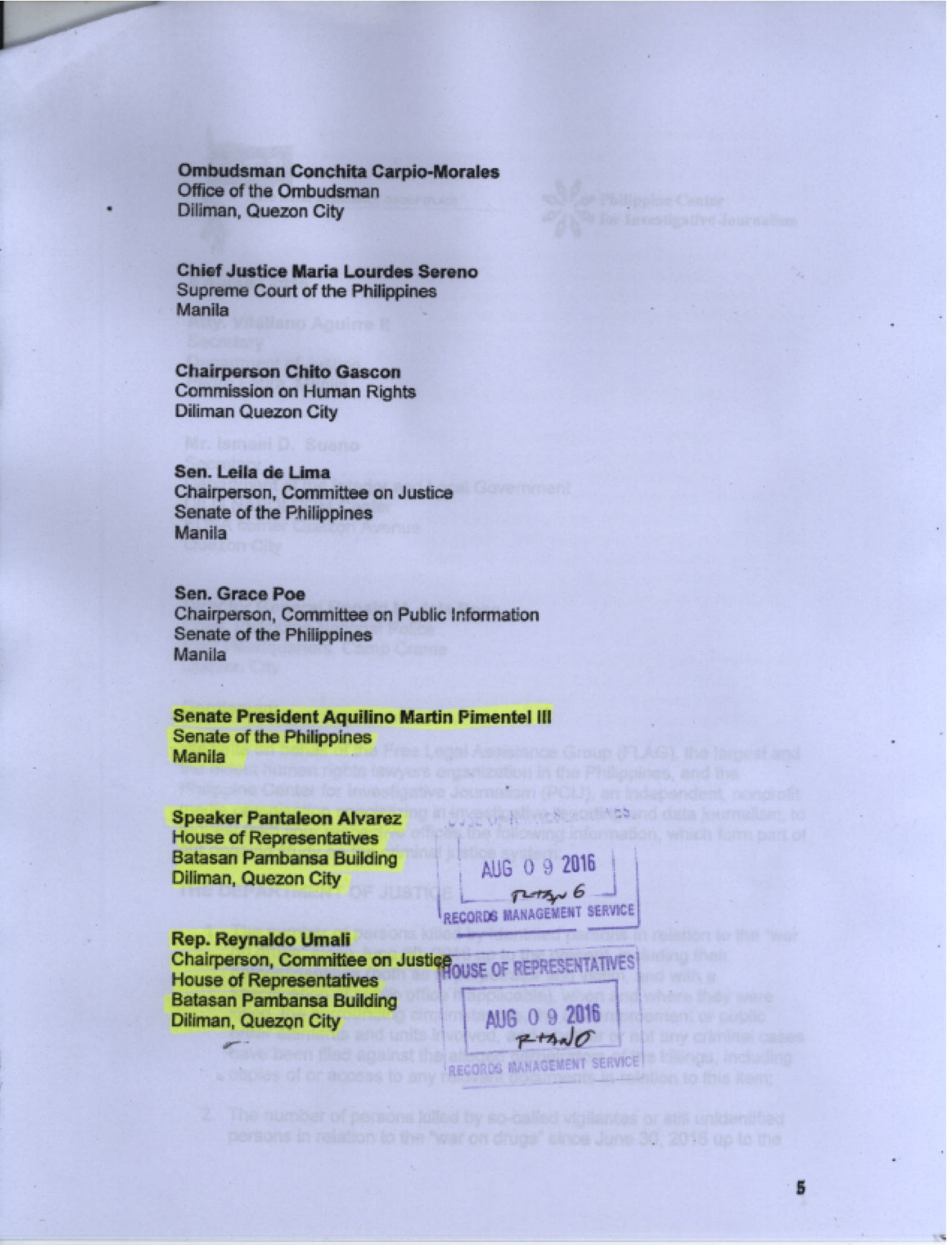 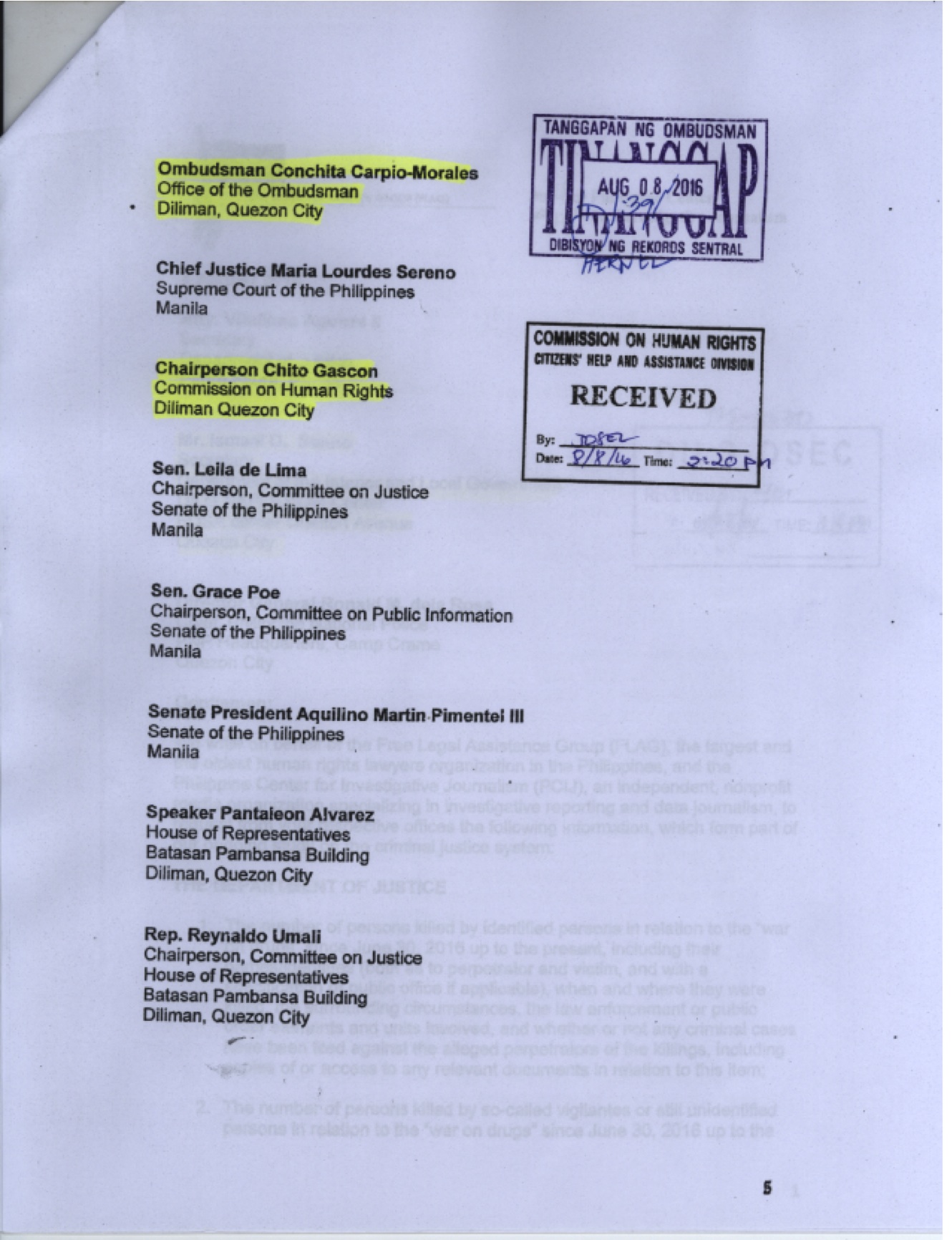 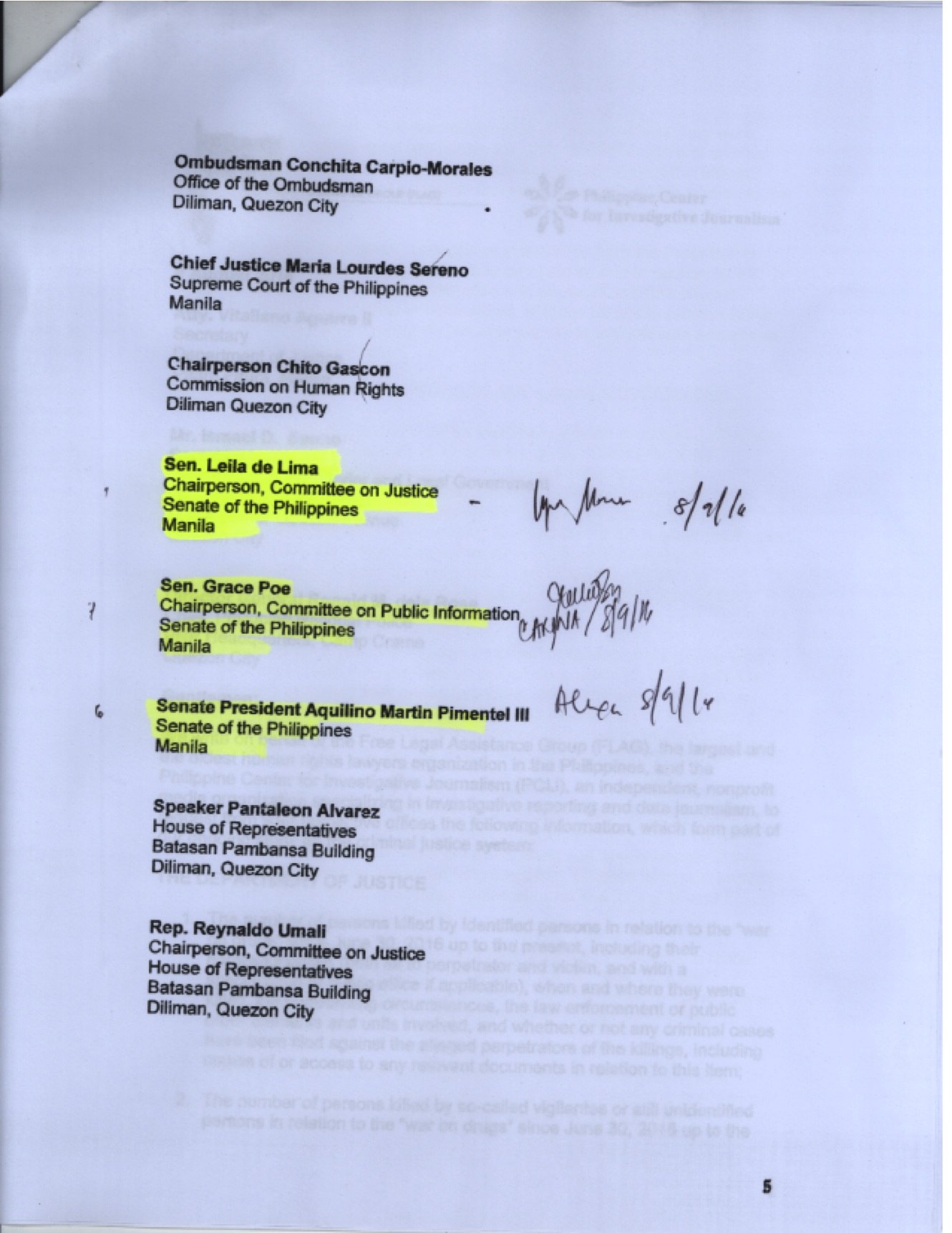 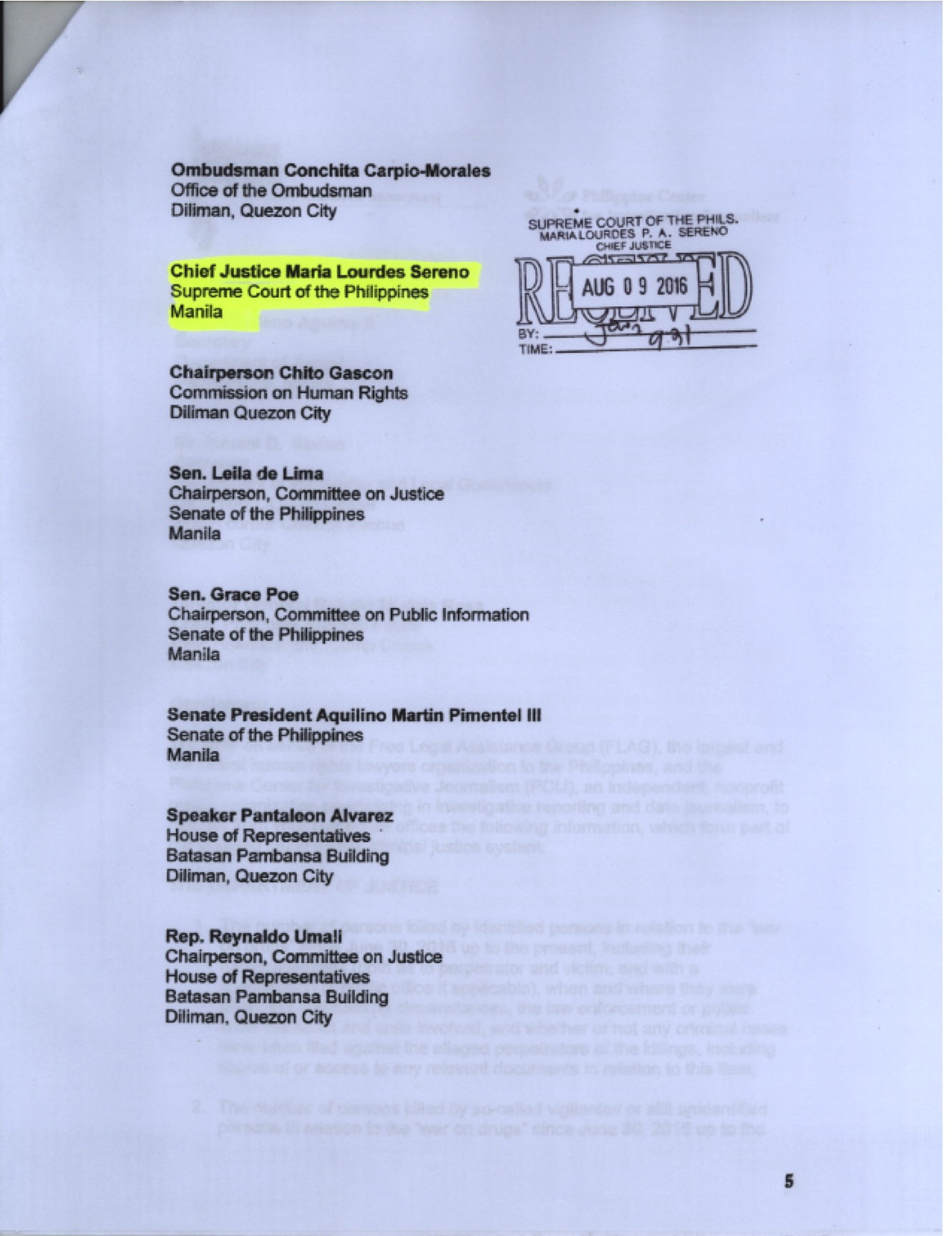