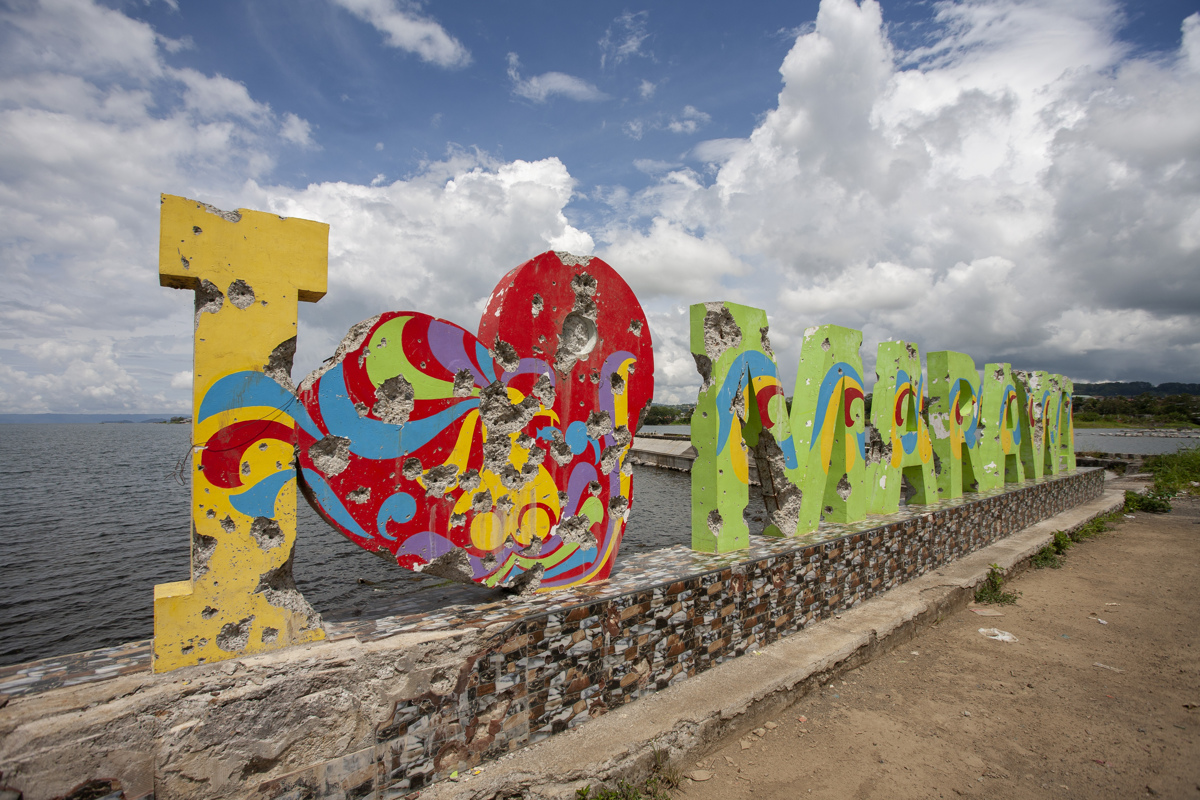 This was the spot where people loved to pose when in Marawi. It is now peppered with bullet holes. This “I Love Marawi” site is located beside Lake Lanao. Photo by BOBBY TIMONERA

EXACTLY A YEAR AGO today, President Rodrigo R. Duterte declared the “liberation” of the Islamic City of Marawi City from the clutches of Islamist militants.

But before that happened, in five months starting May 2017, soldiers and policemen carpet-bombed and reduced Marawi to a massive wasteland.

Twelve months had lapsed since Duterte declared Marawi “liberated” on Oct. 17, 2017. But the ruin and the rubble remain, and tens of thousands of the Meranaws are still unable to return to their homes and their lives.

In pictures, see but also hear and feel the tragedy that lingers still in Marawi. 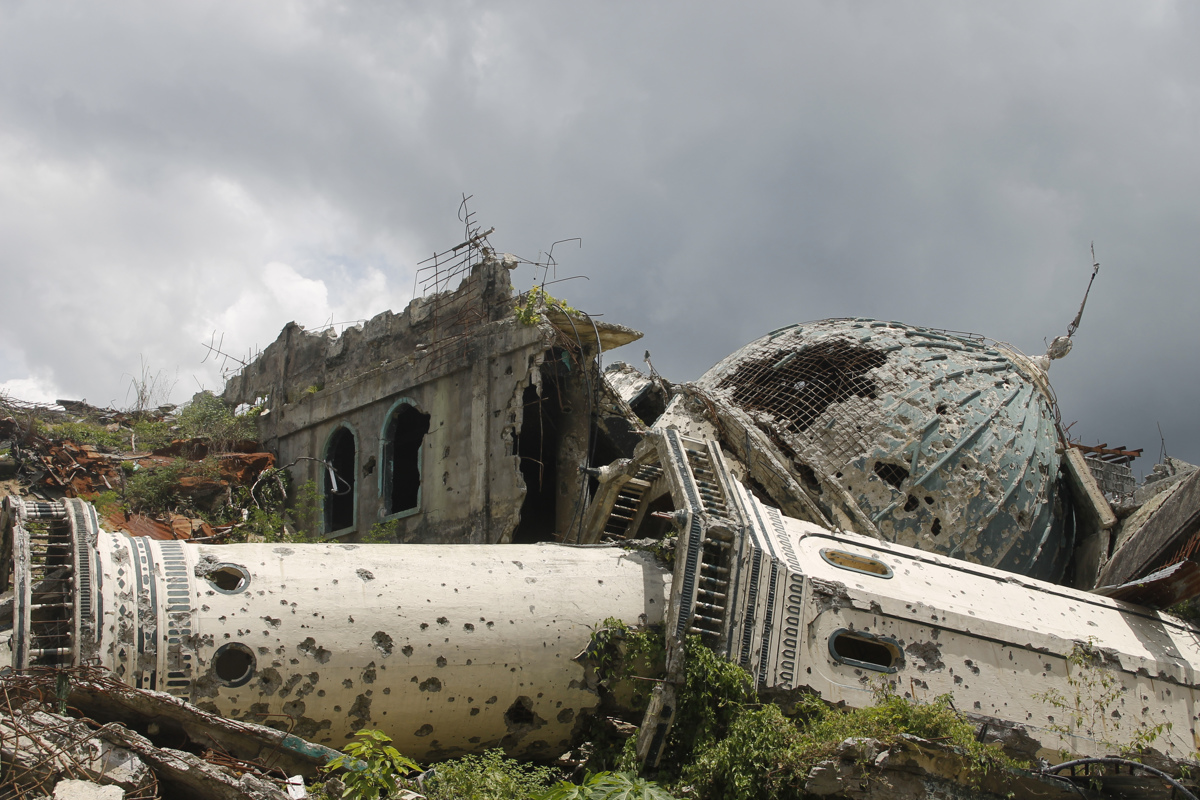 One of the damaged mosques at Ground Zero in Marawi City, as of May 8, 2018. MindaNews photo by H. MARCOS C. MORDENO 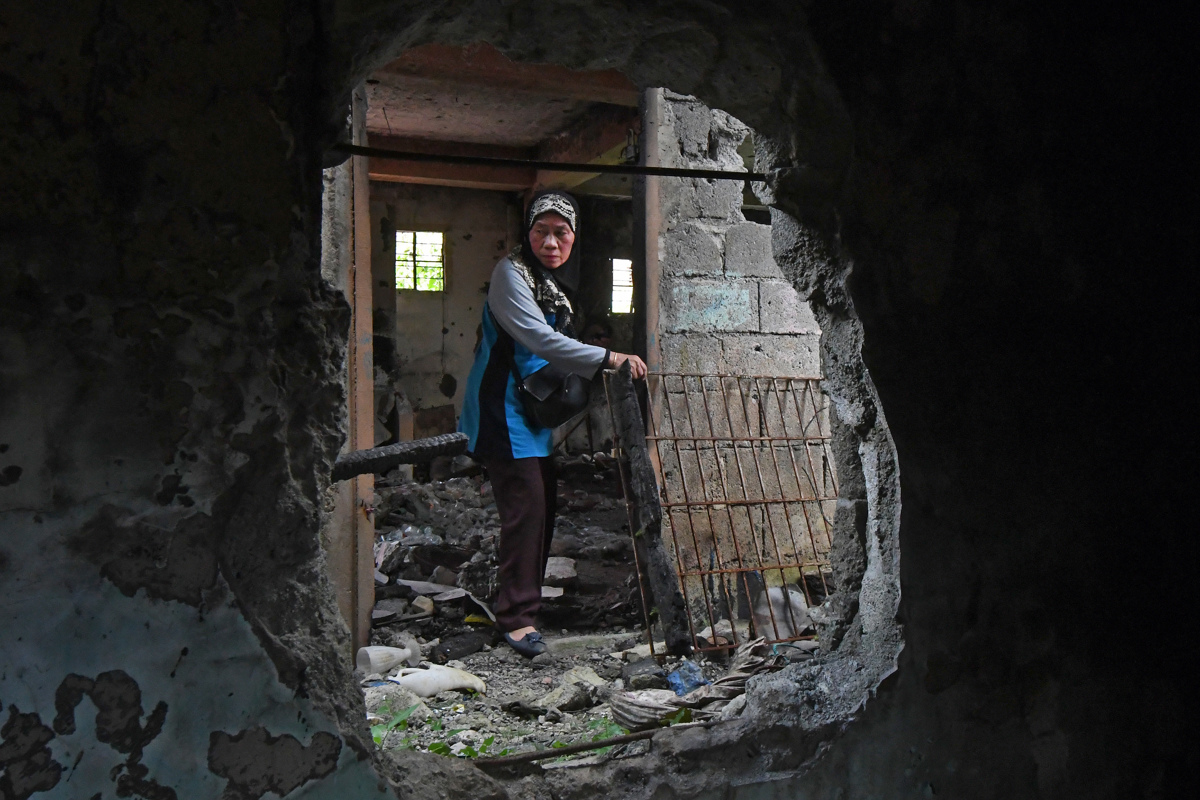 A resident is seen through a spyhole checking out her damaged house in Marawi City on April 5, 2018. Daesh-inspired gunmen cut through houses using spyholes as they fought government troops for more than five months last year. Task Force Bangon Marawi allowed 1,200 residents to visit their homes in Sector 2. A total of 24,000 residents will be permitted to visit their houses to retrieve their personal belongings and possessions at the Main Affected Areas in Marawi City. Photo by FROILAN GALLARDO 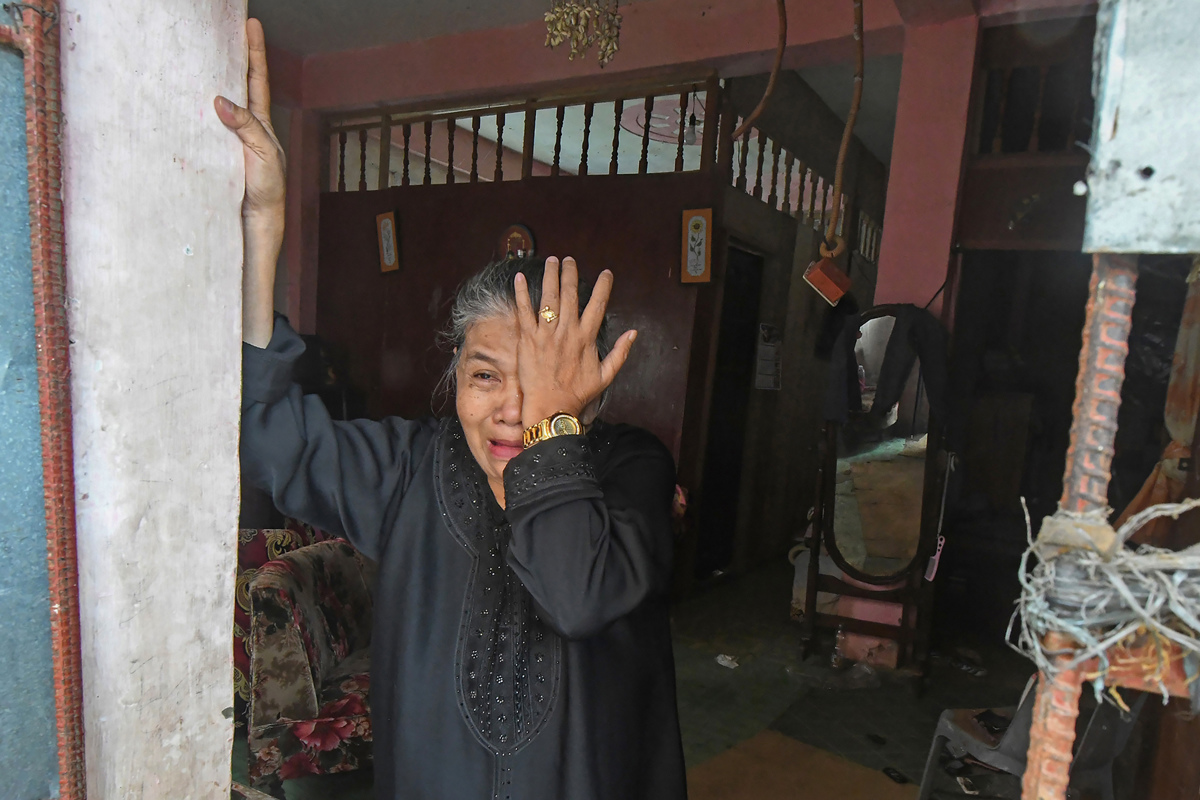 Haji Nurian Cabugatan, 51 , weeps as she narrates to reporters that she found her house ransacked, and her jewelry and money already gone. The military allowed Cabugatan and her neighbors to enter their village provided they would only clean the premises of their homes. Many residents, including Hassan, disobeyed the order and entered their houses. Photo by FROILAN GALLARDO 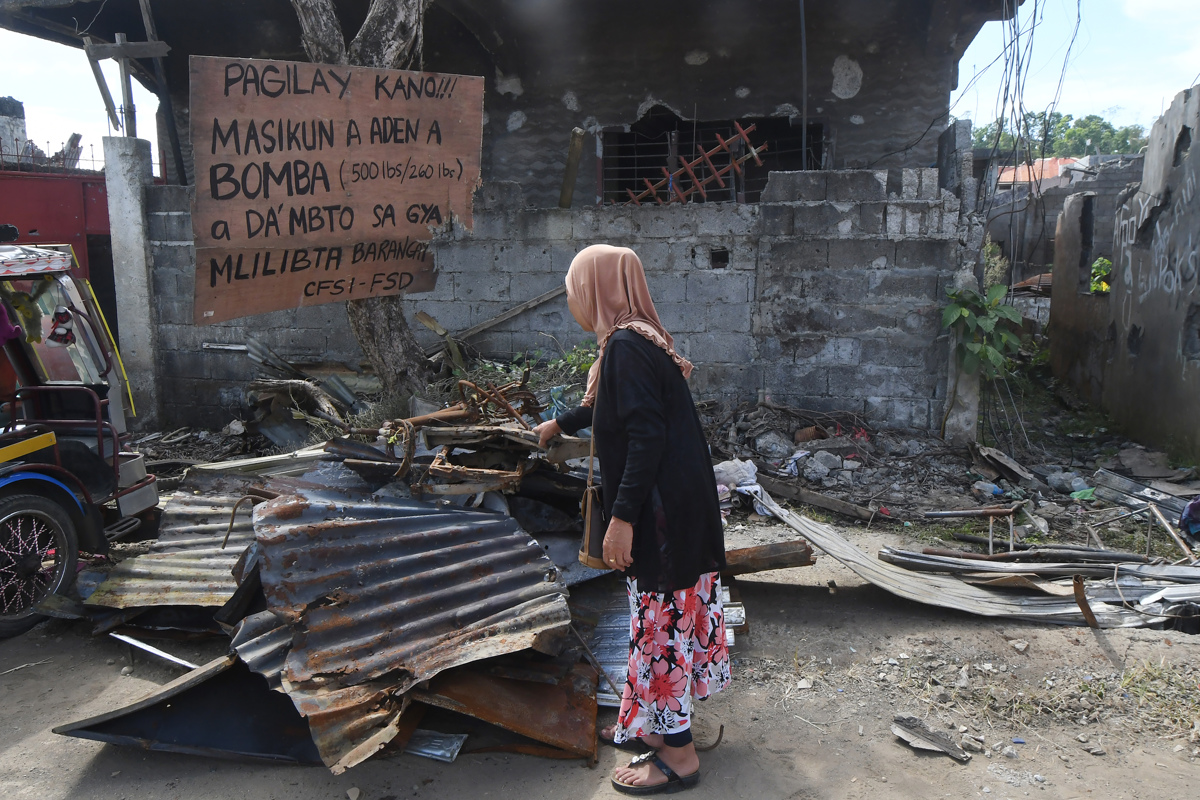 A sign hangs on a tree warning residents to be careful of unexploded ordnance, including 500-pound aerial bombs that have not yet been recovered. Photo by FROILAN GALLARDO 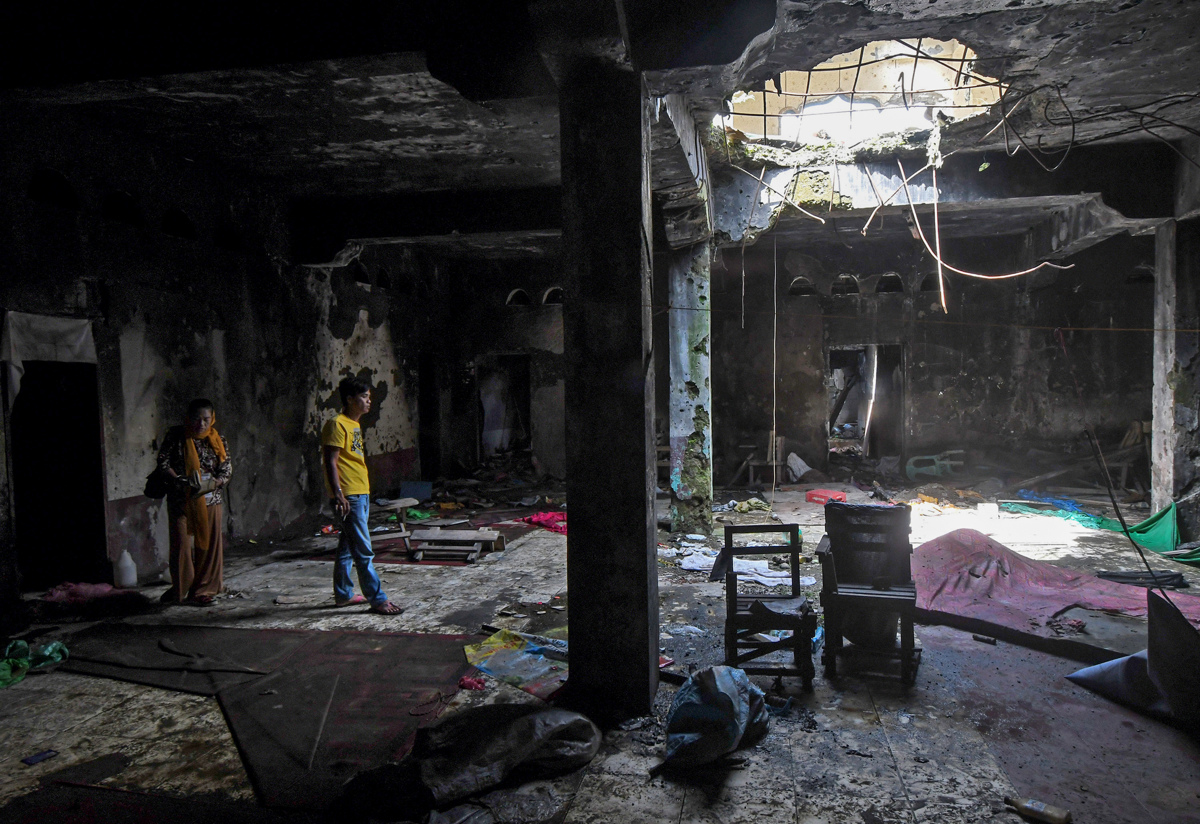 Light seeps through a hole caused by a bomb inside the basement of the Bato Ali Mosque in Marawi City on Tuesday, May 8, 2018. Fr. Teresito “Chito” Soganob and another hostage were rescued by Philippine troops in the vicinity of the mosque after its basement was turned into a headquarters of the Daesh-inspired gunmen during the siege of the city last year. Photo by FROILAN GALLARDO 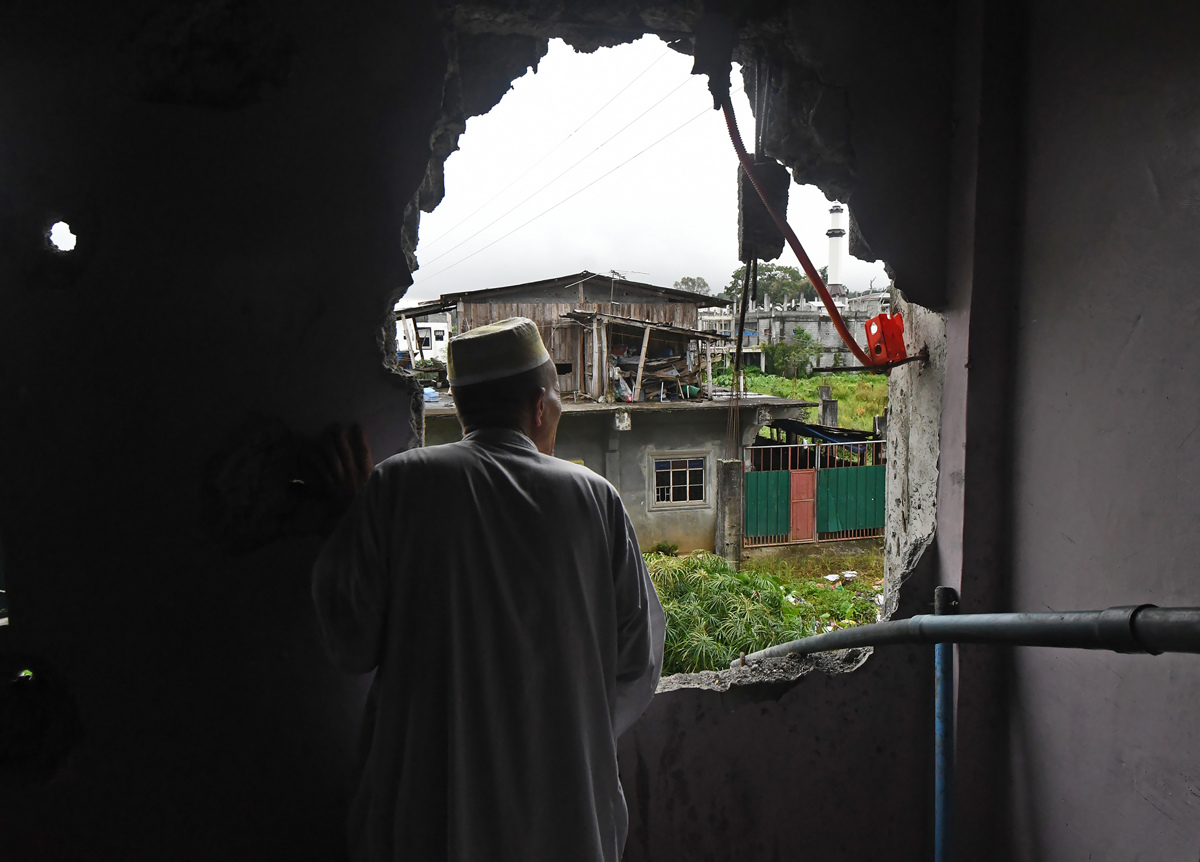 A resident peers through a spyhole to scan the damage sustained by his community in Barangay Malotlot, Marawi City on Nov. 7, 2017. Photo by FROILAN GALLARDO 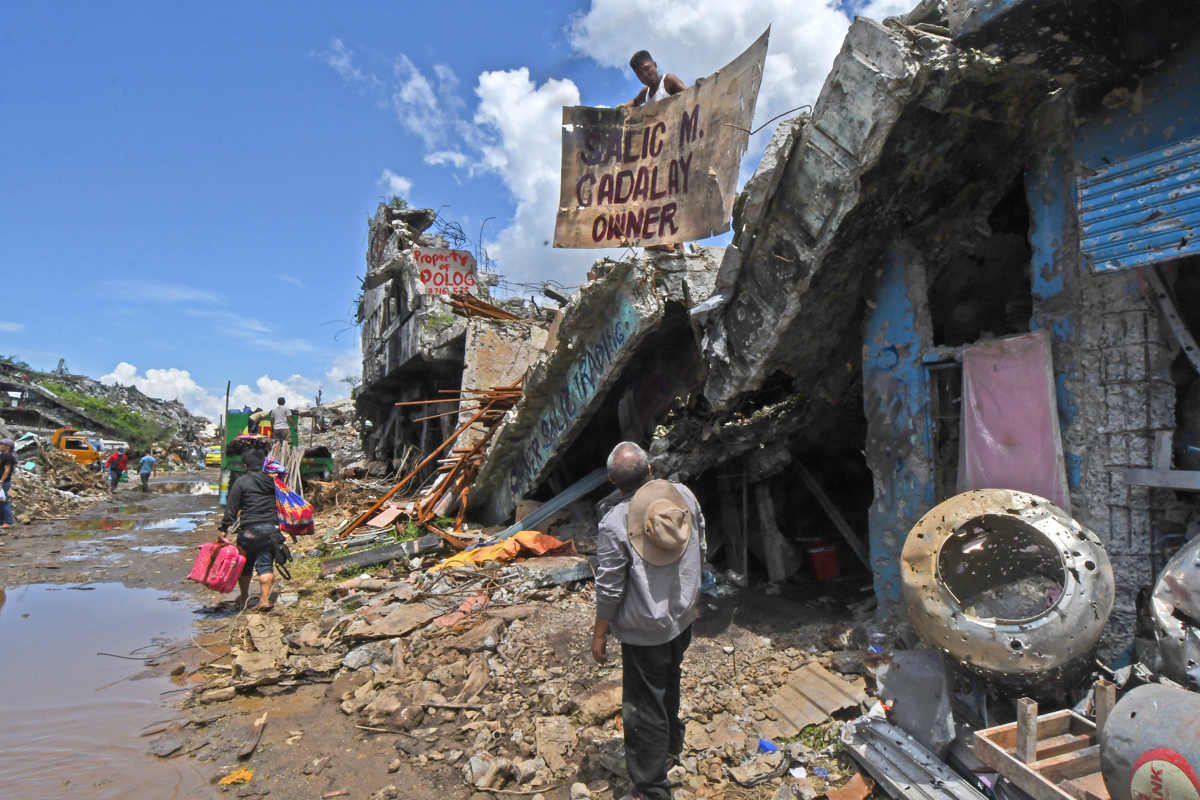 Residents put up signs claiming ownership over what used to be their homes and buildings when they were allowed to visit Marawi City on May 9, 2018. Photo by FROILAN GALLARDO 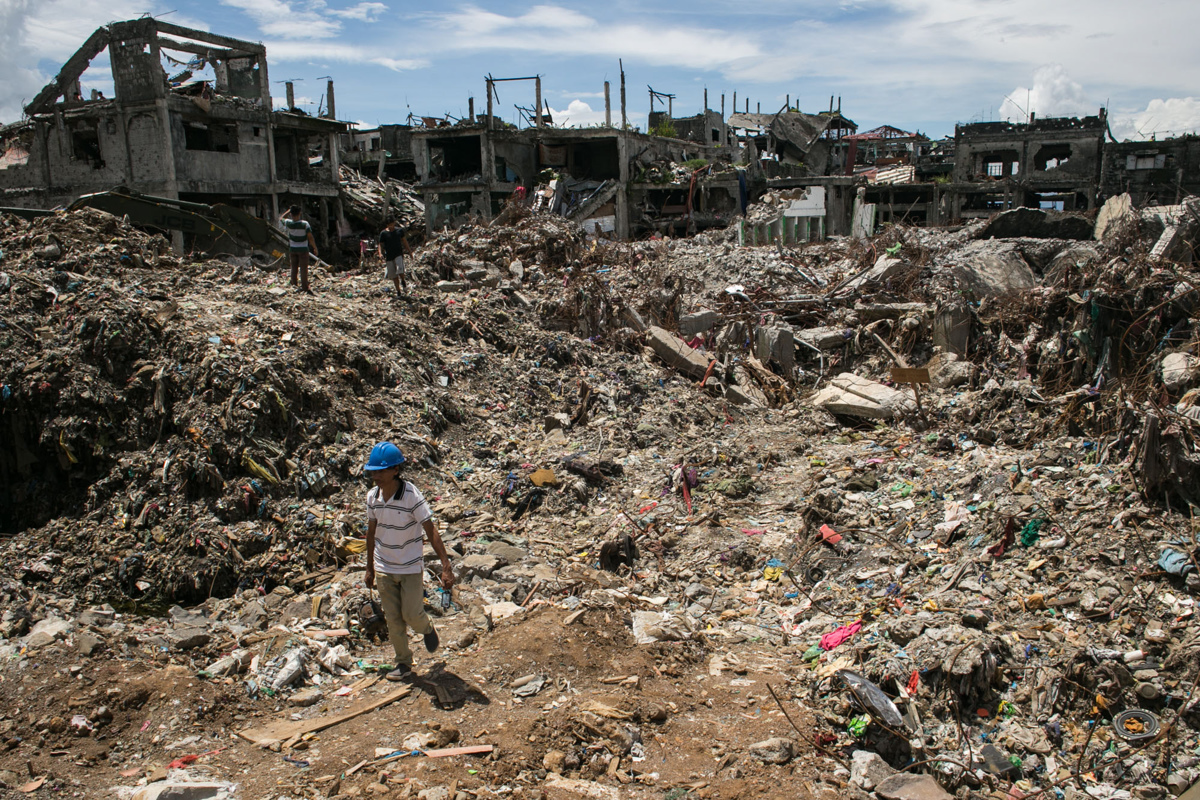 Residents and business owners in the Padian area, Marawi’s business district, get to visit the place for the first time on May 8, 2017. This is what was left of the area. MindaNews photo by MANMAN DEJETO 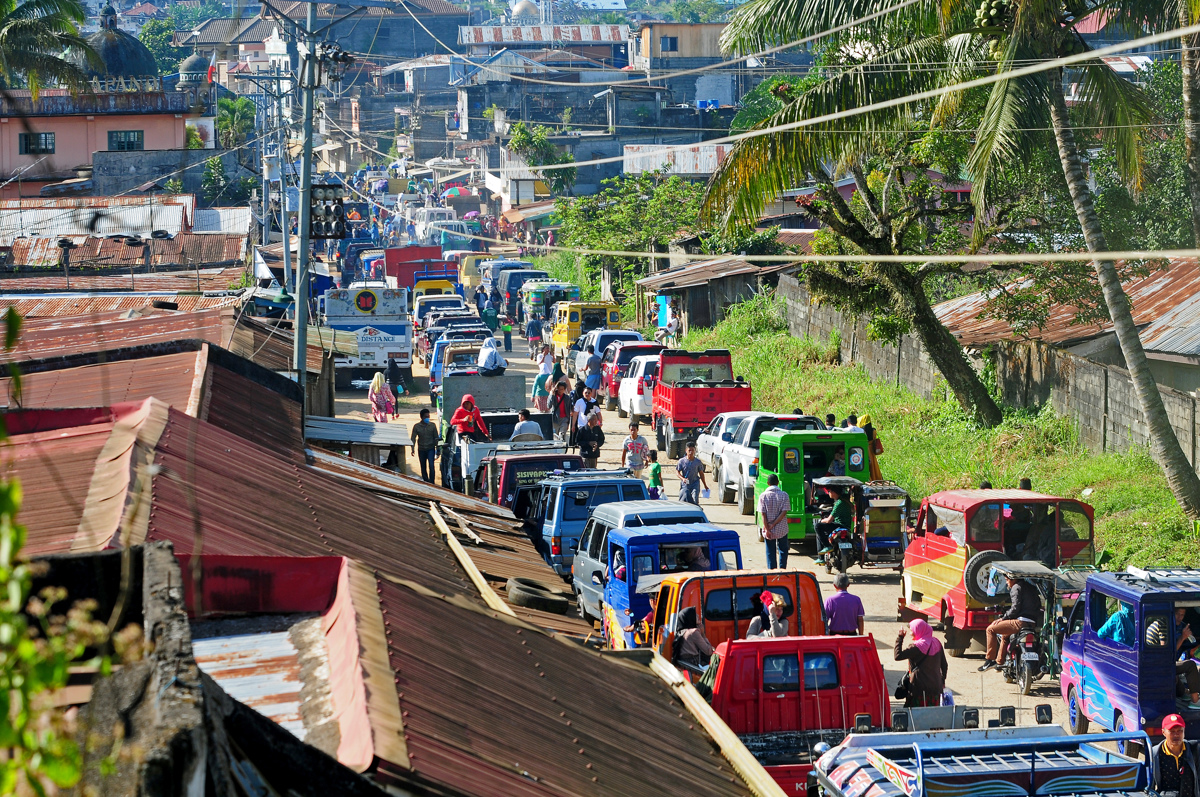 Vehicles jam the checkpoint in Mapandi bridge on Apri 5, 2018. Task Force Bangon Marawi allowed residents to visit their homes to retrieve their personal belongings and possessions at the Most Affected Areas in Marawi City. MindaNews photo by FROILAN GALLARDO 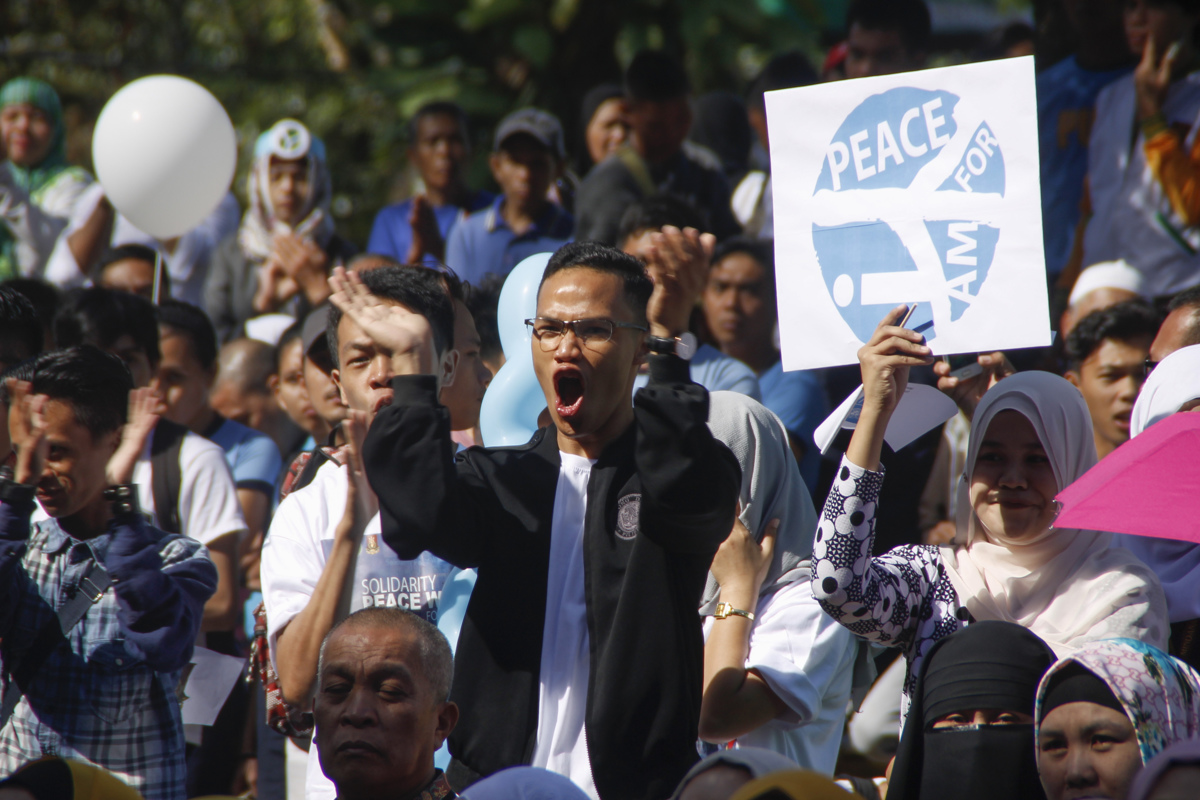 Meranaws, during a rally inside the Mindanao State University (MSU) campus in February 2018, demand their return to their homes and asked government to rush rehabilitation efforts. MindaNews photo by H. MARCOS C. MORDENO 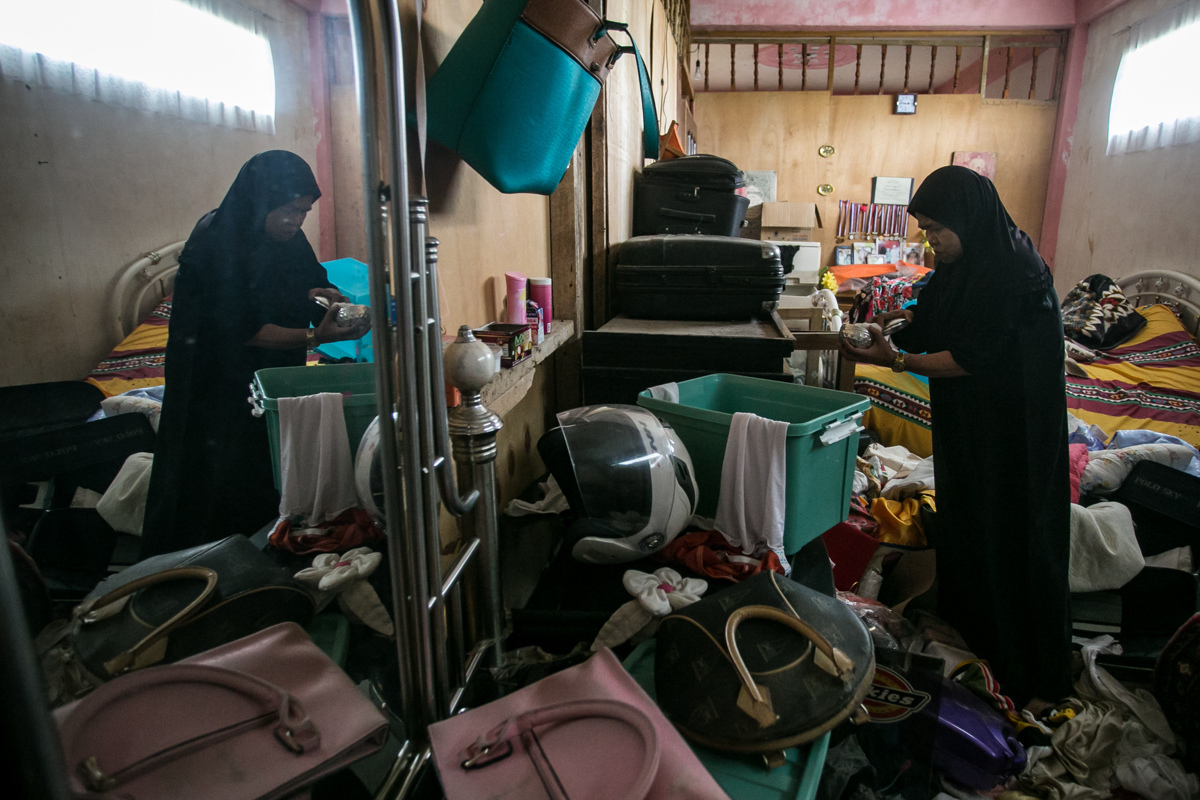 Nurain Cabugatan finds her bedroom in complete disarray when she returned home for the first time since the siege of Marawi City began on May 23, 2017. She discovers that her jewelry box had been emptied and other items had been stolen from her house. MindaNews photo by MANMAN DEJETO 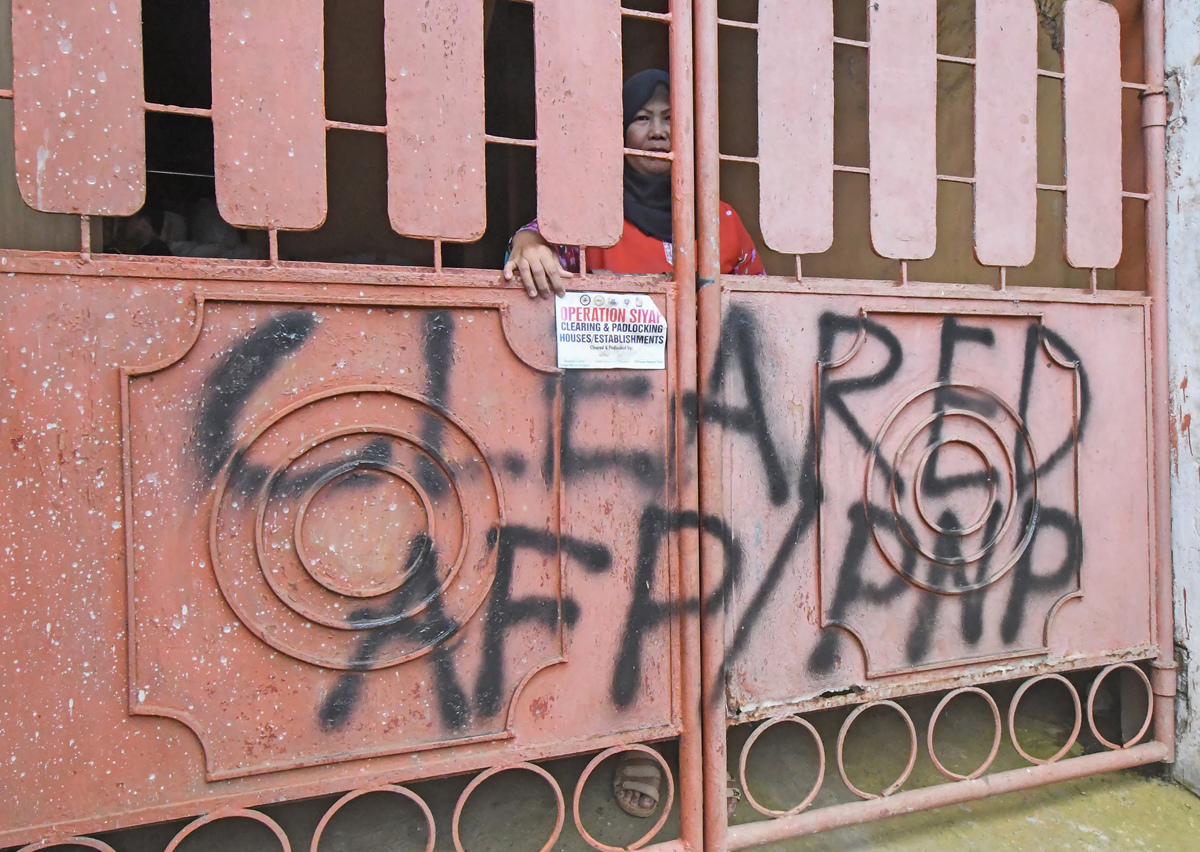 A Marawi resident returns home in Barangay Malotlot after it was cleared by the Philippine military and police on Oct. 26, 2017. The military and the police had cleared nine villages and allowed residents to return to their homes. Photo by FROILAN GALLARDO 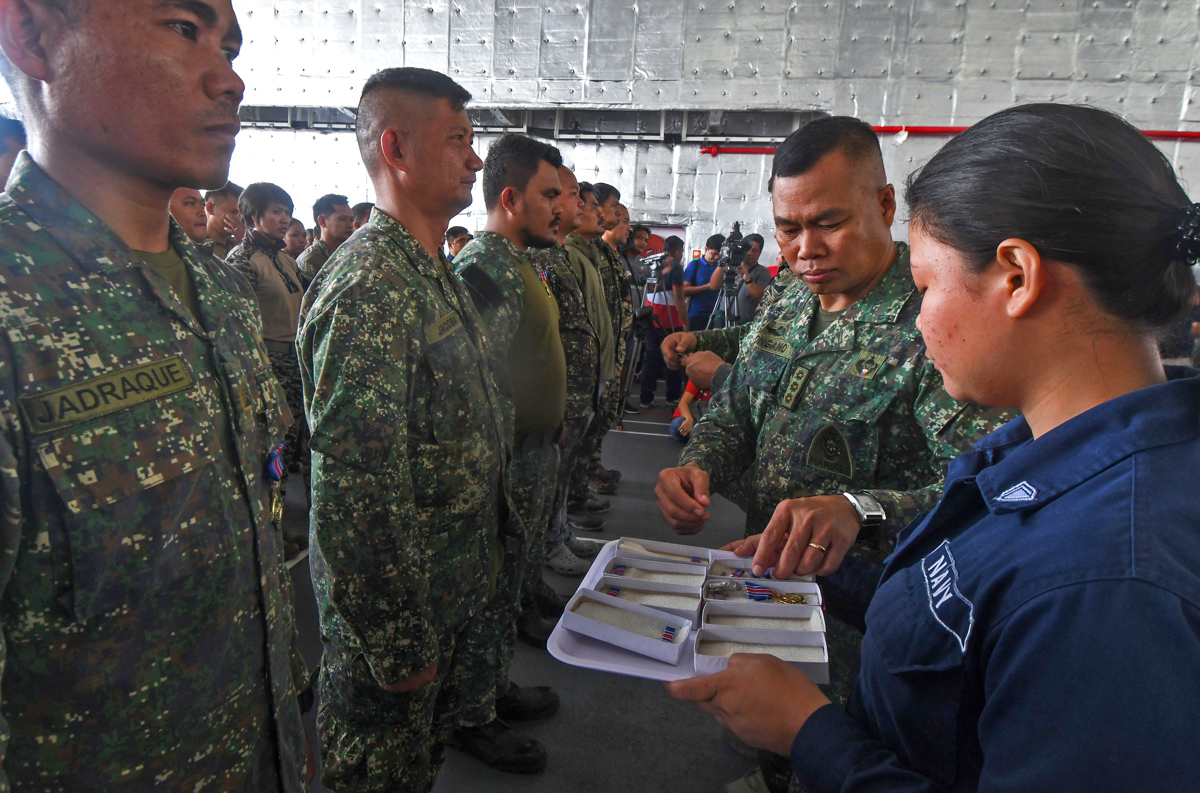 Navy officials confer medals on Philippine Marine soldiers aboard the BRP Tarlac, which docked in Iligan City on Nov. 25, 2017. The Navy boat took the Marines home after Marawi City was declared liberated. Photo by FROILAN GALLARDO 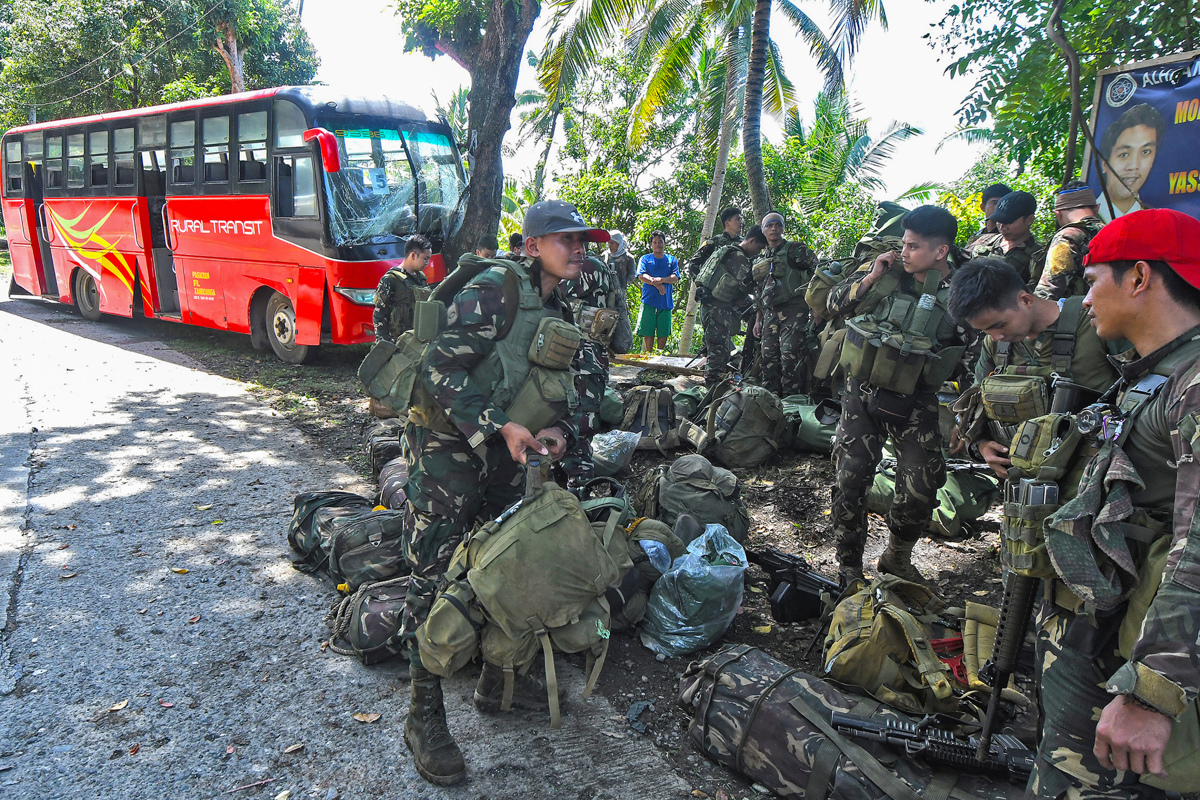 Army Scout Rangers gather their gear on the curbside of the Marawi-Iligan highway after the bus they were riding met an accident on Oct. 25, 2017. Photo by FROILAN GALLARDO 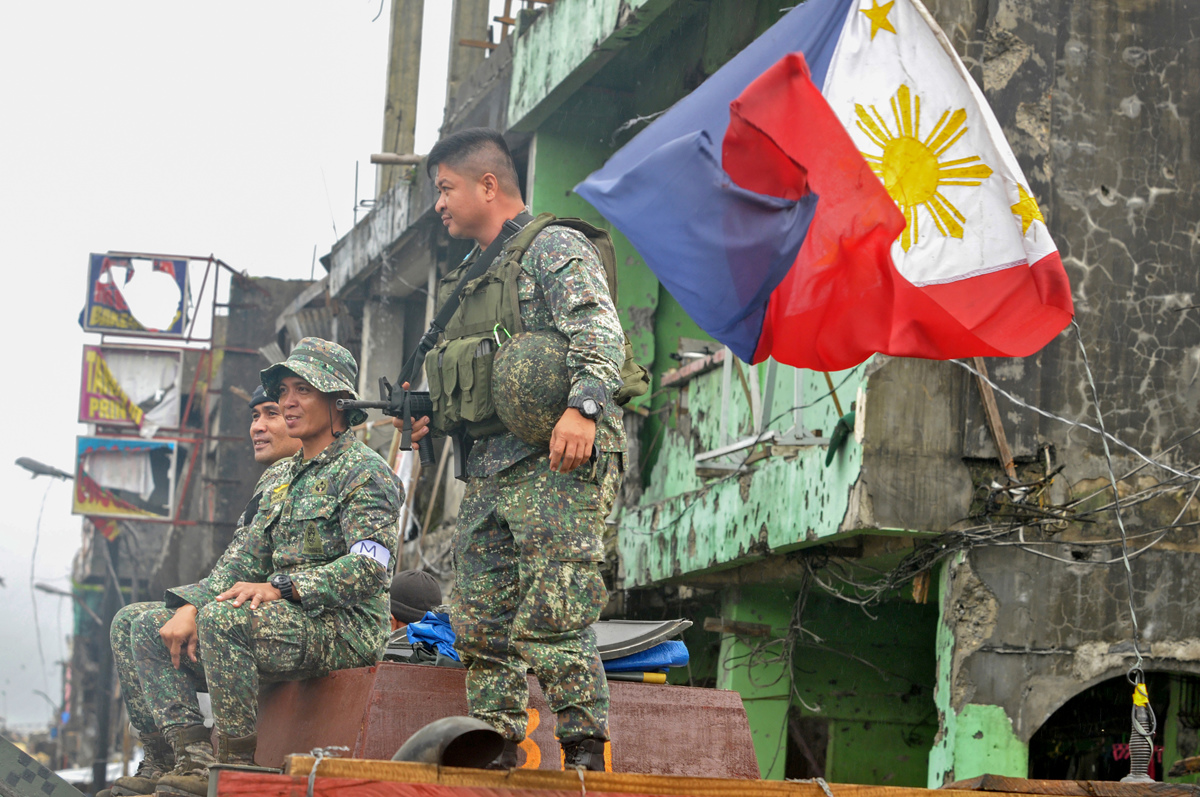 Marine soldiers sit on top of a V150 armoured personnel carrier (APC) with the Philippine flag on display, on Quezon Avenue in Bangolo business district as President Rodrigo Duterte, who was in the next block, declared Marawi City liberated on Oct. 17, 2017 from the ISIS-Maute gunmen who controlled the city for five months. Photo by FROILAN GALLARDO 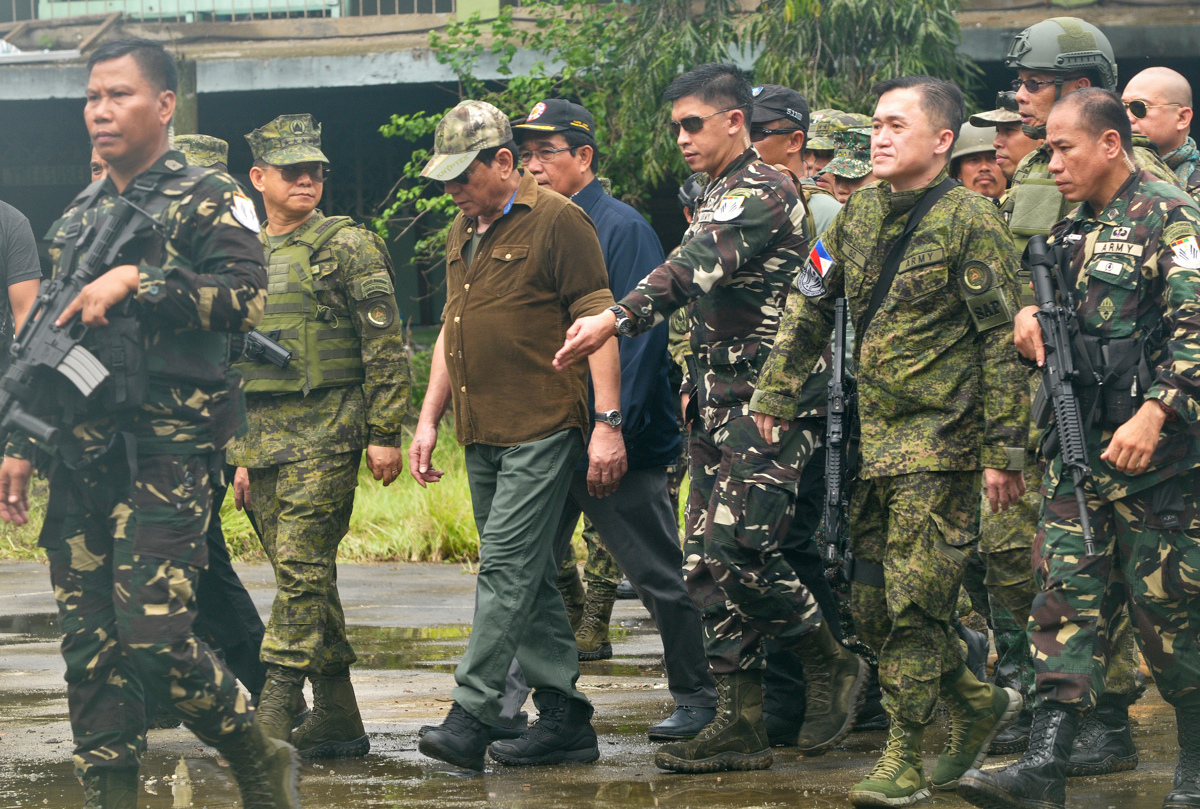 President Rodrigo Duterte arrives in Bangolo District in Marawi where he declared the city free from the Isis-Maute gunmen on Oct. 17, 2017. Photo by FROILAN GALLARDO 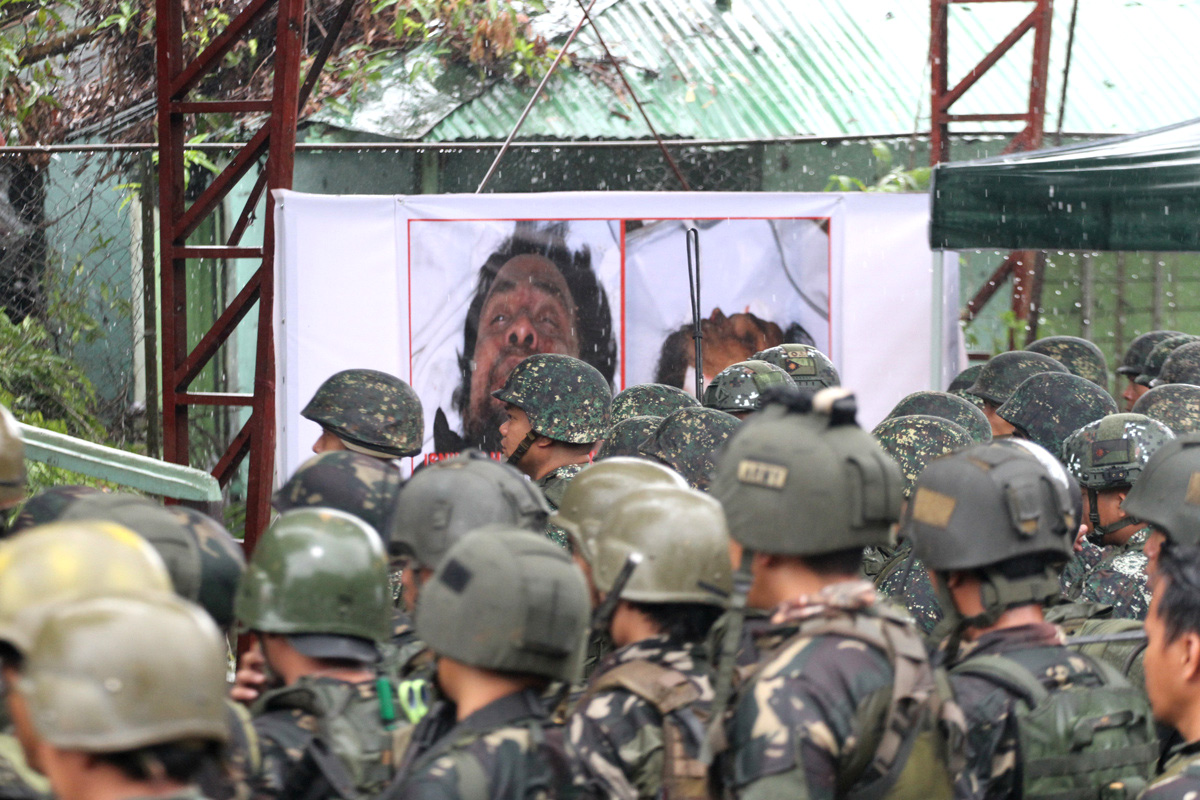 A huge tarpaulin bearing images of slain Maute leaders Isnilon Hapilon and Omar Maute is displayed where troops were gathered in formation while waiting for President Duterte to arrive. Photo by MANMAN DEJETO 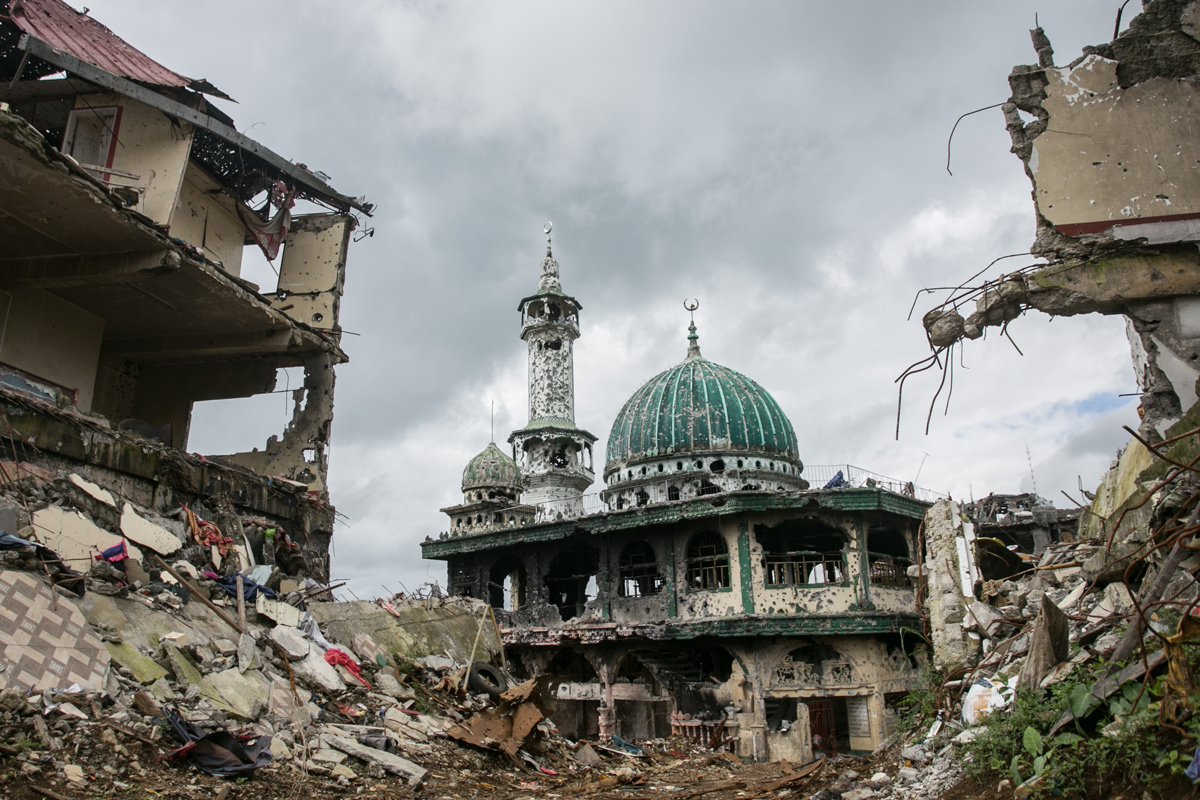 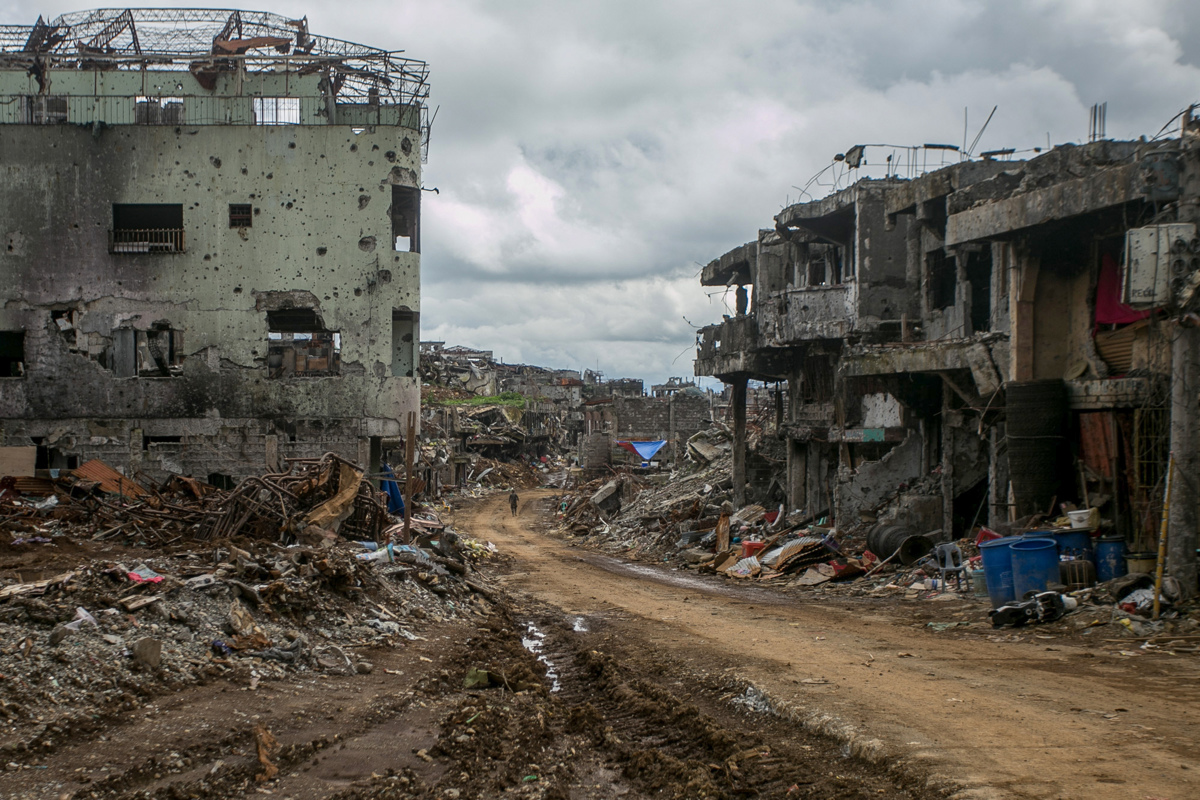 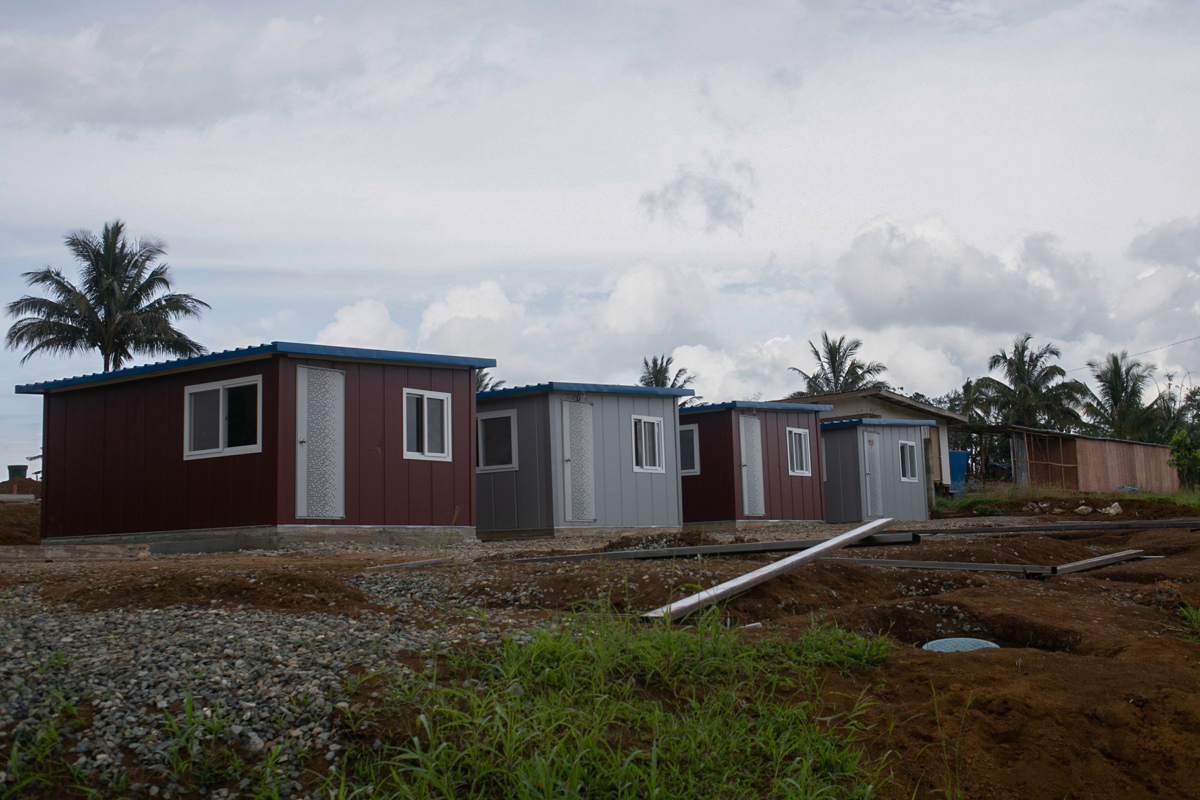 Some of the finished temporary homes at Barangay Sagonsongan. Oct. 25, 2017. MindaNews photo by MANMAN DEJETO 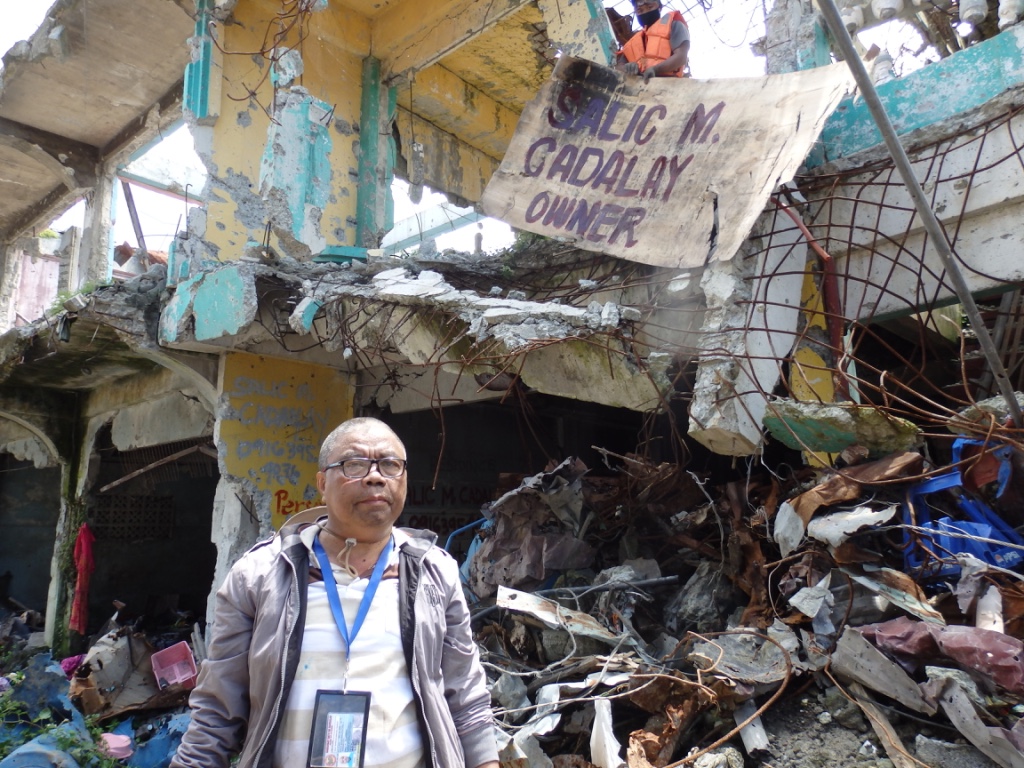 “One time, big time,” Salic Cadalay says of his losses. “Lahat ng kayamanan namin, kaisa ra nawala (All our wealth gone in an instant).” Cadalay set up his store 32 years ago for his children and grandchildren but lost everything after the Marawi Siege. MindaNews photo by CAROLYN O. ARGUILLAS 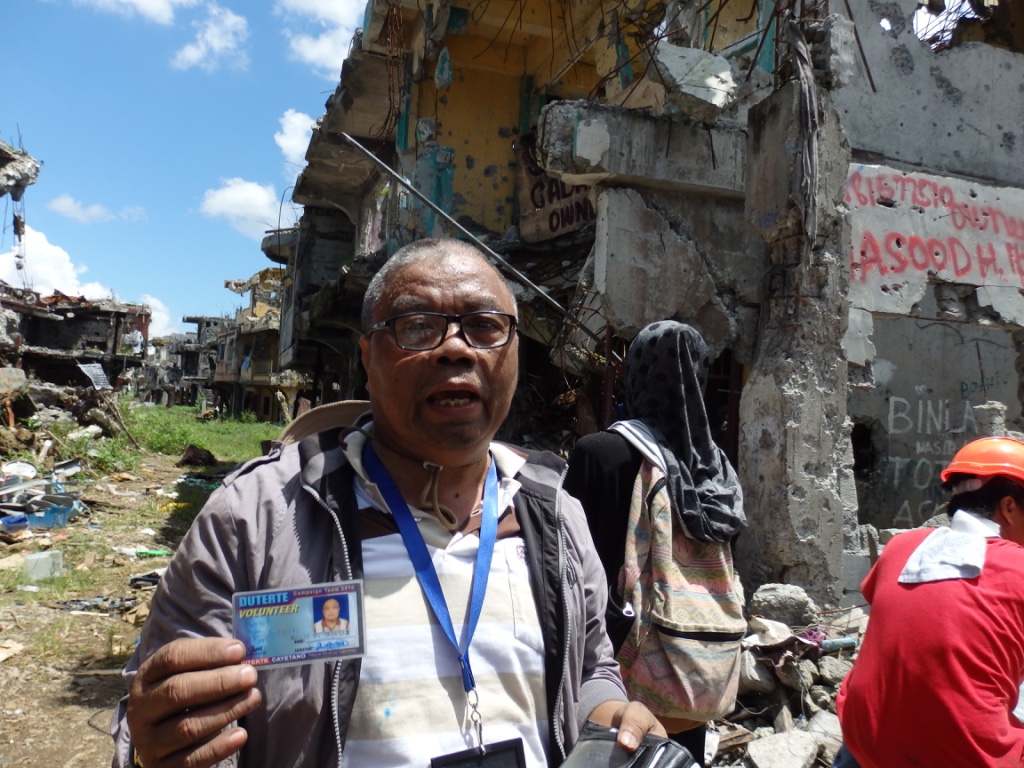 Salic Cadalay shows off his “Duterte Volunteer” ID; he campaigned for Rodrigo R. Duterte in the 2016 elections. After the Marawi Siege, he says of Duterte; “Kadugo, pero nag-unay sa kadugo (He is of our own blood, but he betrayed us).” MindaNews photo by CAROLYN O. ARGUILLAS 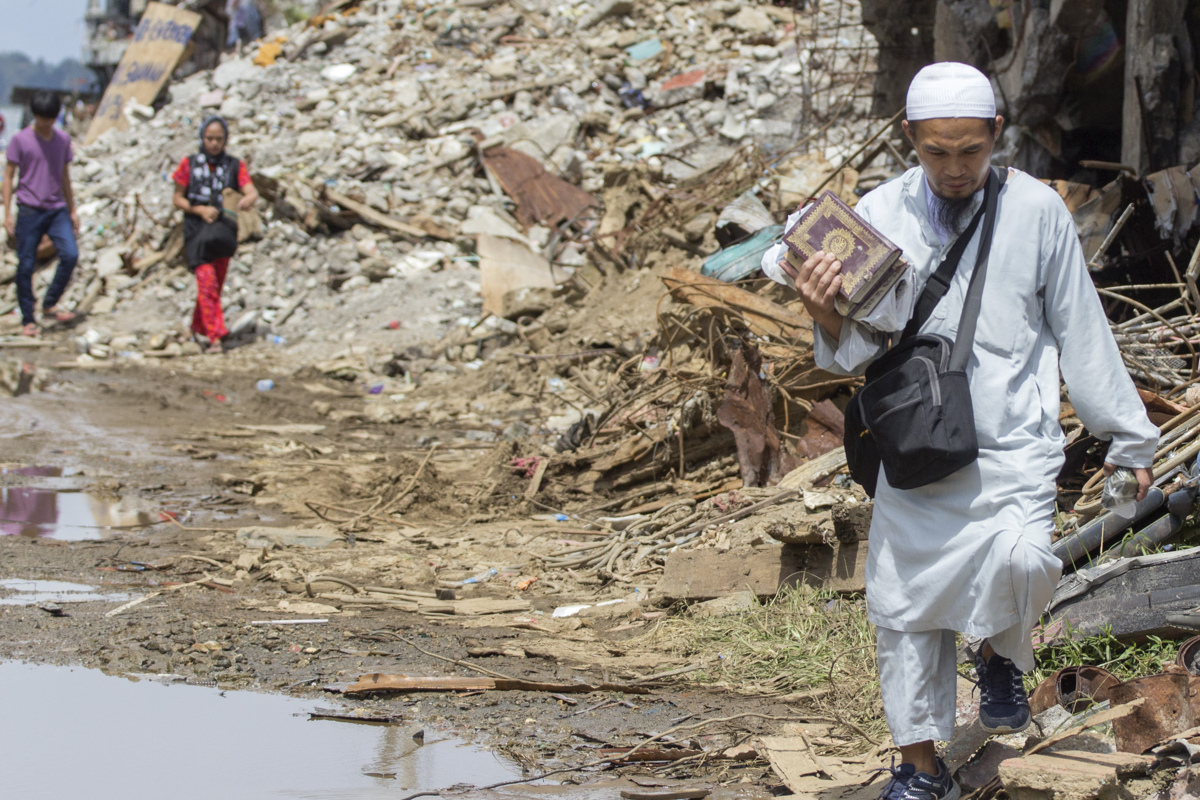 A religious man walks past the ruins of the padian (market) area with copies of the Koran he unearthed from the rubble during the Kambisita on May 8, 2018. Photo by BOBBY TIMONERA 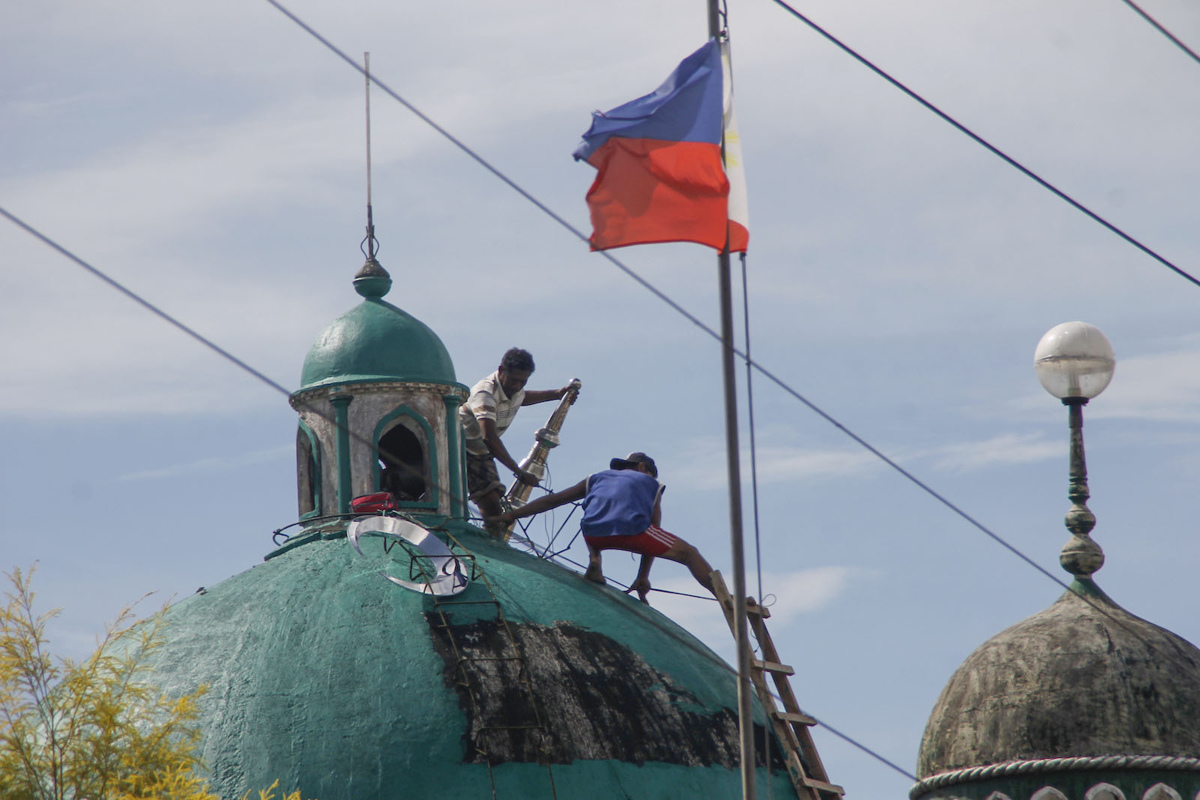 Two men do repair work on the minaret of a mosque in Barangay Mapandi, Marawi City on May 8, 2018. Majority of the mosques, buildings and houses in Marawi were damaged after the five-month fighting between government troops and the ISIS-inspired Maute Group last year. MindaNews photo by H. MARCOS C. MORDENO

Firms of clans among winners of Marawi road, housing deals