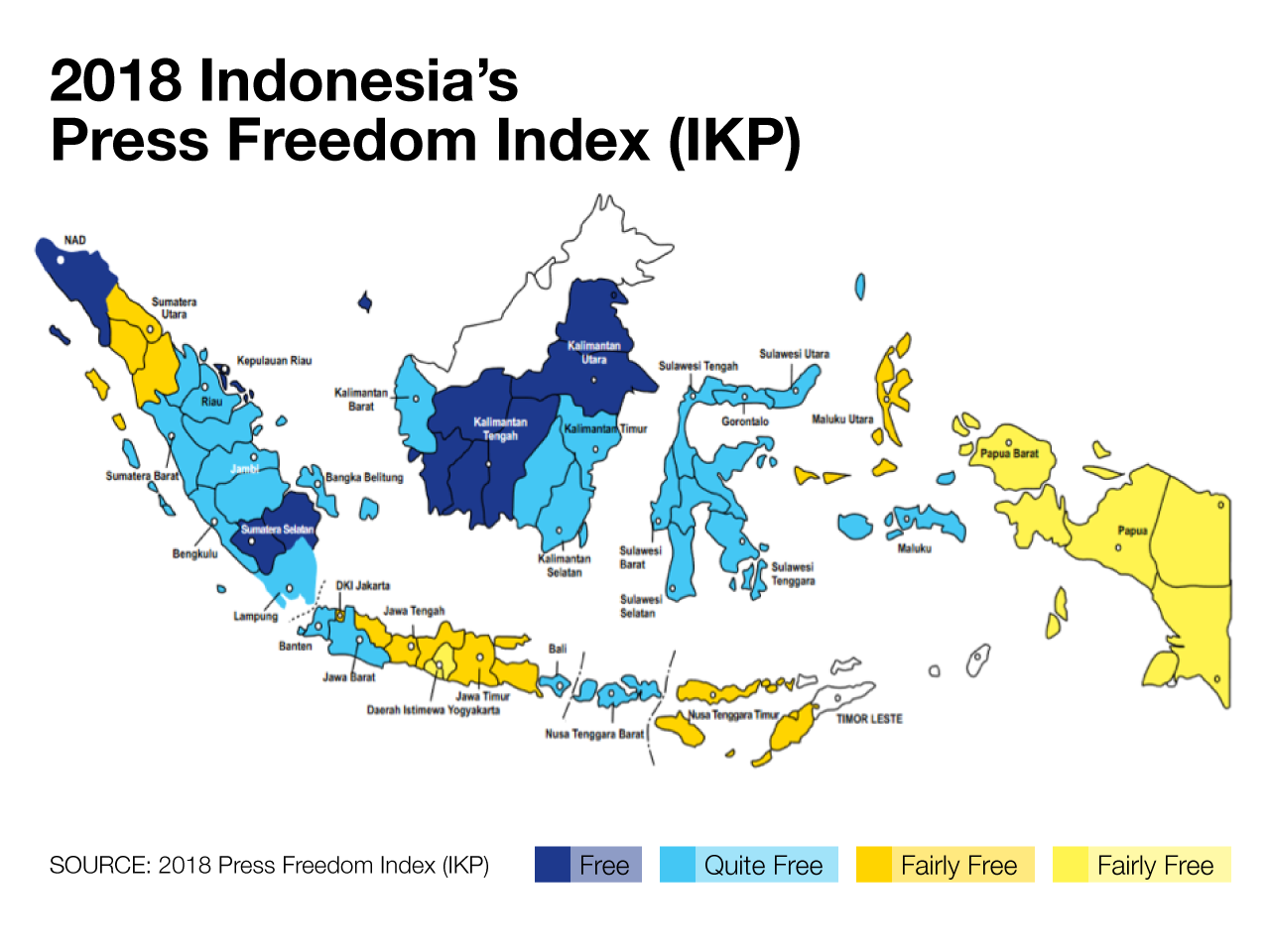 THE YEAR 2019 marks the second decade of Indonesian media’s reform era. Although strongman Soeharto stepped down as president of Indonesia in 1998, it was only in 1999 that reforms began in the country’s media industry, with the passage of the landmark Press Law (Law No. 40 of 1999) on 23 September that year.

Twenty years on, however, Indonesian journalists are having a hard time remaining optimistic about the chances of improvement in media conditions. Data gathered by the Aliansi Jurnalis Independen (AJI, Alliance of Independent Journalists) and other groups show little change from those reported in previous years — not exactly good news. After all, violence against journalists had been escalating in the last decade, and there is still no sign of it letting up.

The high number of complaints filed by members of the citizenry with the Press Council in 2018 also indicates that either the Indonesian media may need to be more professional or the public needs to understand the role of the press better. Then again, it could also be both. Adding to the media’s constant worries are regulations — particularly the Criminal Code and the Electronic Information and Transaction Law — that have hindered freedom of the press.

Freedom House observed that while the country “hosts a vibrant and diverse media environment…legal and regulatory restrictions hamper press freedom.” It also noted that Indonesian journalists were still being subjected to “assaults, arrests, threats, and other forms of obstruction…with perpetrators including politicians, police, and military officials.”

A “press freedom index” is one of the instruments often used to measure media conditions in a country. The factors assessed in such an index include the legal, political, and economic climates. Outside of Indonesia, AJI usually refers to the press freedom index released annually by the France-based Reporters Without Borders or Reporters Sans Frontières (RSF). Within the country, AJI refers to reports by the Press Council.

In RSF’s 2018 Press Freedom Index, Indonesia fared better than most of its Southeast Asian neighbors. The exception was Timor-Leste, whose 98th slot was 26 places ahead that of Indonesia. Within Asia, just five others ranked higher than Indonesia: South Korea (63), Mongolia (69), Japan (72), the Chinese Special Administrative Region of Hong Kong (73), and Nepal (100). At 124th place out of 180 countries, however, Indonesia cannot exactly say that it is doing well.

The Indonesian Press Council’s 2018 Press Index, meanwhile, categorized media freedom in the country as “Medium” or “Fairly Free.” This means conditions improved by just a little bit compared to the previous year.

AJI’s own Advocacy Division collects data through direct reports and media monitoring. In 2018, it documented at least 64 cases of violence against journalists — the second highest number in the past decade. The highest recorded number of such cases in a year so far was posted in 2016 — 81 — and the lowest in 2009, at 39.

AJI recorded 12 cases of physical violence — beating, hitting, slapping — against journalists from January to December 2018. There were also 11 cases each of expulsion and reporting restrictions, as well as of threats. Among the other cases were those involving the destruction of journalists’ equipment and footage (eight cases) and criminalization (also eight).

It is the remaining three cases, however, that concern AJI the most, since they point to a new, worrisome trend. This new type of violence against journalists involves the tracking of an individual’s private information and releasing this online with malicious intent. AJI has decided to categorize such violence as online persecution.

In 2018, one online-persecution victim was Kartika Prabarini, who received threats on her Instagram account after Kumparan.com on 28 May 2018 published an exclusive report regarding the leader of the hardline group Islamic Defenders Front (FPI). Prabarini was one of the reporters who wrote the story that reviewed several legal cases faced by FPI’s leader Rizieq Shihab; the piece had been called “Menjinakkan Rizieq” or “Taming Rizieq.” FPI’s supporters accused Kumparan.com of being disrespectful of their leader because, among several reasons cited, the online publication did not put a “habib” title before his name. “Habib” is a title bestowed on Muslims who have been able to trace their roots back to the prophet Muhammad.

A supporter of Rizieq Shihab, whose online handle was @mastermeme.id, revealed Prabarini’s identity on social media. The followers of @mastermeme.id then began threatening and harassing her online through rude and inappropriate comments regarding her gender and looks. A team called the Lawyers of Activists and Islamic Scholars also threatened to report her and Kumparan.com to the police. The online bullying and intimidation ended only after Kumparan.com ran an editorial of apology.

Gibran Maulana of Detik.com also suffered online persecution after he wrote an article that included a quote from the Brotherhood of Alumni 212’s spokesperson Novel Bamukmin. (The “212” refers to a series of demonstrations that conservative Indonesian Muslims staged for causes ranging from demanding that former Jakarta Governor Basuki “Ahok” Tjahaja Purnama be prosecuted for blasphemy, to supporting the Muslim Rohingya people in Myanmar.)

Apparently, Bamukmin had told homemakers to vote for Prabowo Subianto and Sandiaga Uno — the Indonesian presidential and vice presidential candidates challenging incumbent President Joko Widodo and his running mate Ma’ruf Amin in the 2019 elections — if they want to be rewarded with heaven in the afterlife. The quote, as published by Detik.com on 12 October 2018, read: “Ma’am, you want to go to heaven? Ask Allah, ask His Prophet, ask Prabowo, ask Sandiaga Uno. Correct? Takbir. God willing, you will go to heaven.”

But Bamukmin protested, saying that he had said “love,” not “ask.” Detik.com insisted that the interview tape confirmed clearly that Bamukmin did say “ask,” not “love.” Bamukmin requested for a right to reply, which was granted by Detik.com, but Maulana was harassed online anyway.

A Detik.com photojournalist, though, was made to go through both offline and online harassment. On 2 November 2018, the journalist had gone to cover a rally called “Aksi Bela Tauhid (Defend the Tauhid or Islamic Belief).” But some of the rally’s participants became upset when he began taking pictures of trash in the area. A video that was later uploaded and shared on social media showed one of the rallyists asking him in a shrill tone, “Why do you take photos of the garbage?” Another participant then chimed in, saying angrily, “Check his name-tag. Detik? Let us see your identity card. Please take a photo of his ID card.”

The text accompanying the video read: “Detik’s journalist was caught in the act wanting to paint a bad picture of the Aksi Bela Tauhid by photographing the trash.” The video ended up becoming viral on YouTube, Instagram, Facebook, and WhatsApp. An Instagram and a Facebook user even shared a screenshot of the photojournalist’s identity card (KTP) and press card. Not only was the photojournalist bullied online, he was threatened as well.

To be sure, however, there have been many complaints filed with the Indonesian Press Council in the last decade regarding the behavior of journalists and media outfits. Since 2010, the Council has received an average of more than 600 complaints a year. In 2018, it received 600 or just four less than the previous year.

Two of the most prominent cases handled by the Council in 2018 and early 2019 found the media respondents in error. On 30 May 2018 the daily Radar Bogor ran a story with the head: “Idling Around, Getting Paid Rp112 million (about USD 7,900).” The piece criticized President Joko Widodo’s appointment of former Indonesian President Megawati Soekarnoputri as the chief advisor of Agency for the Implementation of the State Ideology of Pancasila, and the big salary she was getting for the post. The story upset the supporters of Megawati, chairperson of the Indonesian Democratic of Struggle (PDI-P) party, and they attacked Radar Bogor’s office.

The Press Council followed up the case by examining the story. On 4 June 2018, it issued its verdict, in which it said that the story had violated Article 1 and Article 3 of the Journalist Code of Ethics or KEJ. Article 1 of KEJ requires journalists to be independent, to report accurate, balanced stories without any ill intentions. Article 3 of KEJ demands that Indonesian journalists check their information, publish balanced stories, leave out any judgmental facts and opinions, and apply the principle of presumption of innocence.

The Council suggested Radar Bogor to publish Megawati’s the right of reply. At the same time, however, it said that it could not justify her supporters’ acts of violence against Radar Bogor’s team.

The other case involved Indopos daily, which published a story speculating on the possible replacement of President Widodo’s running mate in the 2019 elections with former Jakarta Governor Ahok. The piece, which had the title “Ahok Will Replace Ma’ruf?,” ran on 13 February 2019, prompting Widodo’s campaign team to file a complaint with the Council.

The Council found that Indopos had violated KEJ, primarily because the paper had relied only on chats in social media for the story. It said that the piece lacked accurate information and that the daily violated Article 3 of KEJ because it did not double-check its materials and had spread fake news. The Council ordered Indopos to publish a right of reply and issue a formal apology.

Not everyone upset by a particular report in media, however, is content with just filing a complaint with the Press Council. Some go to court, waving either the Criminal Code (better known by its Indonesian acronym KUHP) or the Electronic Information and Transaction Law (UU ITE) as their basis for pressing their case.

In 2018, UU ITE was used the most to criminalize journalists. On 21 July 2018, for example, Serat.idEditor in Chief Zakki Amali was reported to the Central Java Police by the rector of Semarang State University. The online publication had run a report investigating allegations of plagiarism committed by the rector, who then turned to UU ITE to file his own complaint with the authorities. The Central Java Police proceeded with the case and has already summoned Amali at least twice. The case is still ongoing as of this writing.

West Sumatra Governor Irwan Prayitno also used UU ITE to sue Haluan daily journalist Benni Okva Della. The governor said that a story written by Della had tarnished his reputation. He used UU ITE against Della for a post the latter had on social media that contained a weblink to the story. Prayitno also filed a complaint about the story with the Press Council. On 25 February 2019, the police named Della as a suspect.

AJI President and IndonesiaLeaks.id co-founder Abdul Manan meanwhile was among those reported by lawyer Elvan Gomez, citing KUHP Article 317, to the police on 23 October 2018. KUHP Article 317 covers false complaints. The case had been triggered by an investigative piece published by five media outlets in collaboration with IndonesiaLeaks.id, a platform that enables whistleblowers to submit crucial documents relating to scandals that could implicate public interests. The story, “The Red Book Scandal,” exposed the spoliation of evidence that showed transfers of big money from Indonesia’s Anti-graft Agency police investigators to the police’s elite. The police have yet to take any further actions. Gomez also filed a civil lawsuit against Manan with the South Jakarta District Court on 25 October 2018, but he withdrew it the next day.

KUHP is actually a relic of Indonesia’s Dutch colonial era. The government and lawmakers have been trying to revise it since 2015, with renewed efforts in 2018. Such efforts, however, have been without inputs from the media community.

Revision of the KUHP is still ongoing. — Southeast Asian Press Alliance (SEAPA), May 2019