INDONESIA: Political Reporting Can Do With Female Touch 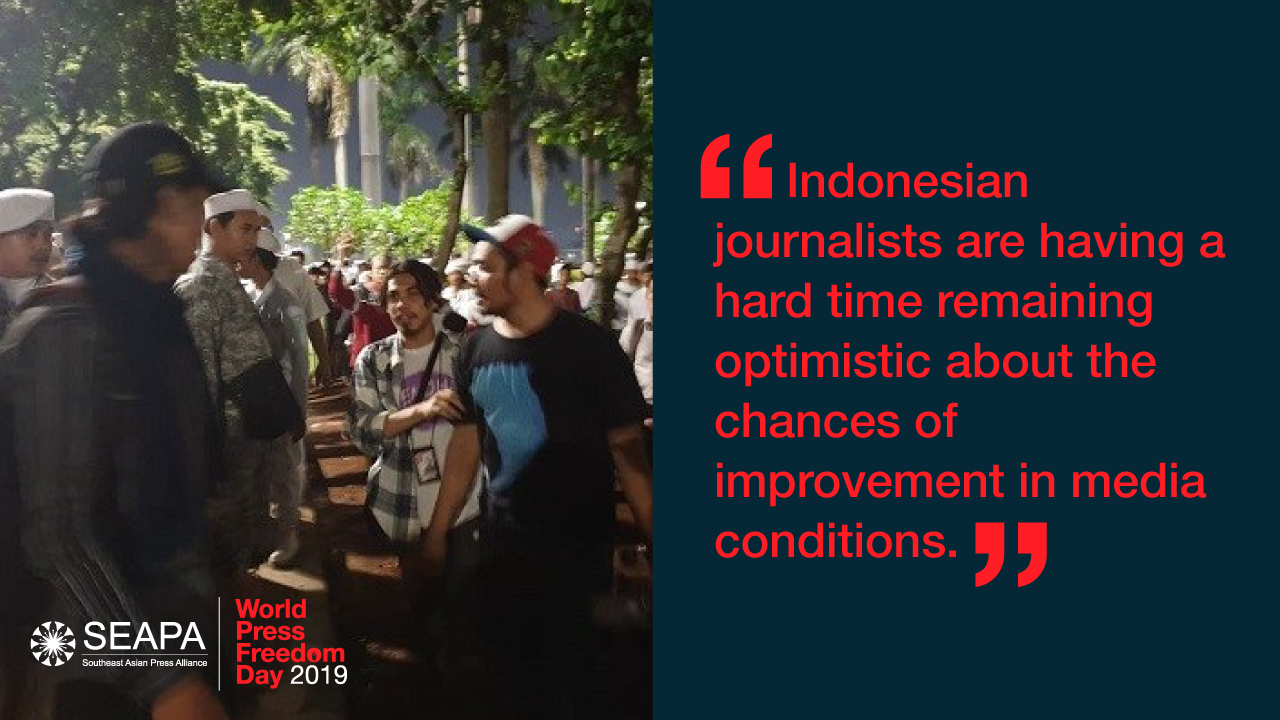 THE ROUGH and tumble world of politics is supposed to be the territory of male journalists in Indonesia, but many of their female counterparts say they are not only being assigned to cover it, they are also able to do it well.

Yet while women journalists say that they have opportunities to cover politics, cultural norms still hinder them at times to accept such assignments. They also admit that popular views of women as physically and intellectually weaker than men persist, which can affect their editors’ choice of whom to assign to political stories.

These were some of the findings of a survey conducted by the Forum Jurnalis Perempuan Indonesia (FJPI, Indonesian Women Journalists Forum) between February and March 2019. Some 105 women journalists from the eight provinces where FJPI is present — North Sumatra, West Sumatra, Aceh, Riau, Jambi, Papua, West Papua, and West Java Province — participated in the survey.

Through the survey, FJPI sought primarily to determine whether there is gender discrimination in the newsroom when it comes to political coverage. It also wanted to see how media companies were treating their female employees, as well as how women in management positions in such companies have been handling issues concerning women in the newsroom and elsewhere.

Most of the respondents or more than 93 percent said that men and women have the same opportunities in getting assignments in general. Majority (77) or about 73 percent also said that they have had experience in covering politics. Moreover, about 40 percent said that they went on political assignments alongside their male colleagues, a situation that can sometimes be controversial in Indonesia, which has become increasingly conservative in the last several years.

But some of the respondents who said that they had done political stories also admitted to being subjected to physical and verbal assaults, as well as to having overcome perceptions that they are “not smart enough” to be on the political beat. Yet only 35 percent of the 77 who have covered politics said that they did extensive research in preparation for their assignments, including reading books and looking up the track records of politicians.

Preparation is always a wise step for any journalist covering any beat, but it is especially vital for those doing political stories. According to more than 15 percent of the respondents who have had political assignments, interviewees for their stories tended to lie and use convoluted language when answering questions, which could fluster or confuse an unprepared reporter.

Meanwhile, some of the respondents said that while they are interested in doing political stories, they are unable to go to meetings or events that take place at night because of their family responsibilities and security concerns. They also worry about being perceived as having too close ties with male sources and interviewees, which is inevitable since males still dominate the country’s political scene.

Interestingly, women who are in management positions in media companies said that the “limited time” female journalists have for work — primarily because of their duties at home — is among the disadvantages of having women in media. They also listed the inability to work late nights and higher vulnerability to become victims to crime and violence among the drawbacks of women journalists. Too, the women bosses said that female media workers can be “spoiled,” are “less brave” and “slower” than men, “emotional,”, and have “physical problems” that apparently include their having their monthly periods, getting pregnant and giving birth, and having to breastfeed their children.

Indonesian labour laws actually allow women workers “menstruation leaves” of a maximum of two days each month. Maternity leaves are allowed for a maximum of three months, split into six weeks before a woman’s due date and six weeks after giving birth. Women who breastfeed are also supposed to be given time during work hours to be able to do so or at least pump the breast milk into containers.

Eighty-six percent of the survey’s respondents, though, said that they do not take menstruation leaves (but it is unclear if they meant they do not ask for leaves themselves or if management disallows them to have these). More than 78 percent also said that there are no designated spaces for breastfeeding in their companies’ premises.

At the very least, however, there seems to be little discrimination when it comes to wages. Nearly 82 percent of the respondents said that there is no difference in the salaries and allowances of men and women journalists who are on similar levels.

Still, only a few women have managed to break the glass ceiling. Out of 105 respondents, only 37 (35 percent) were in management-level posts. Yet even though they had been quick to come up with the disadvantages of having women journalists, they had a longer list of positive things to say about their female colleagues. Among these are what they said is women’s ease in building communications with sources. They also said that women are more sensitive, meticulous, diligent, deft, empathetic, patient and do not give up quickly, loyal, and responsible. To these women managers, female reporters are fit for in-depth news, including those involving politics.

Asked how they ensure gender equality in the newsroom and in the stories their outfits cover, the women managers said that they try to recruit females as much as possible, prioritize female sources for stories, and give women reporters the opportunity to cover any kind of news. Nearly half or 46 percent of the women executives, however, stressed that competence still mattered more than gender in recruiting reporters, and 51 percent in assigning them stories. Only 24 percent also said that they made it a point to give space in their publications for stories concerning women.

Some of the respondents who have done political stories meanwhile said that while the work can be complicated, they enjoy doing it and are comfortable covering political issues. They also said that they are able to share their perspectives as women with political insiders because of their work, and raise issues concerning women and children that can be overlooked in politics’ predominantly male environment.

Former Metro TV reporter Meutya Hafid, who left journalism for politics a few years back, has commented that there should be more women covering politics and other so-called “hard” beats.

“We want equal representation in various story angles, whether political, social, cultural, or economic,” she said. “I hope that more women could become journalists and cover important, strategic matters.”

Meutya said that more women journalists should also try to cover conflict areas despite the obvious dangers involved. In 2005, while on a reporting assignment in Iraq, she and her cameraman were kidnapped and taken hostage for about a week. In Indonesia, some areas such as in the mountains of Papua and West Papua can be hostile territory even without armed conflicts; especially during elections, politicians there see members of the media as enemies rather than professionals just doing their job.

According to Meutya, anyone wanting to cover conflict areas should already have formidable skills and experience, aside from strong reporting instincts.

She added, “I hope that more women cover conflict areas, especially because there are actually a lot of stories there that could show the humanist side of an event or conflict that may escape a male reporter. Moreover, it has been said that the biggest losers in conflicts are women.”

In general, respondents to FJPI’s survey said that they hope for less intimidation and intervention from authorities — as well as from their own employers — whenever they do political stories. They also said that they could do with more seminars on political issues, along with workshops on investigative and disaster journalism, and safety and self-defense training. — Southeast Asian Press Alliance (SEAPA), May 2019