Bobi Tiglao used to understand that. And used to think it was a good thing.

A long time ago, when we were young and foolish, Malou Mangahas and I were booted out of The Manila Chronicle for standing up for Bobi Tiglao.

We had wanted Bobi to succeed Amando Doronila as editor of the newspaper. We thought he had the chops to lead the Chronicle, a paper shuttered by martial law but which had reopened months after the fall of Ferdinand Marcos.

How wrong we were. 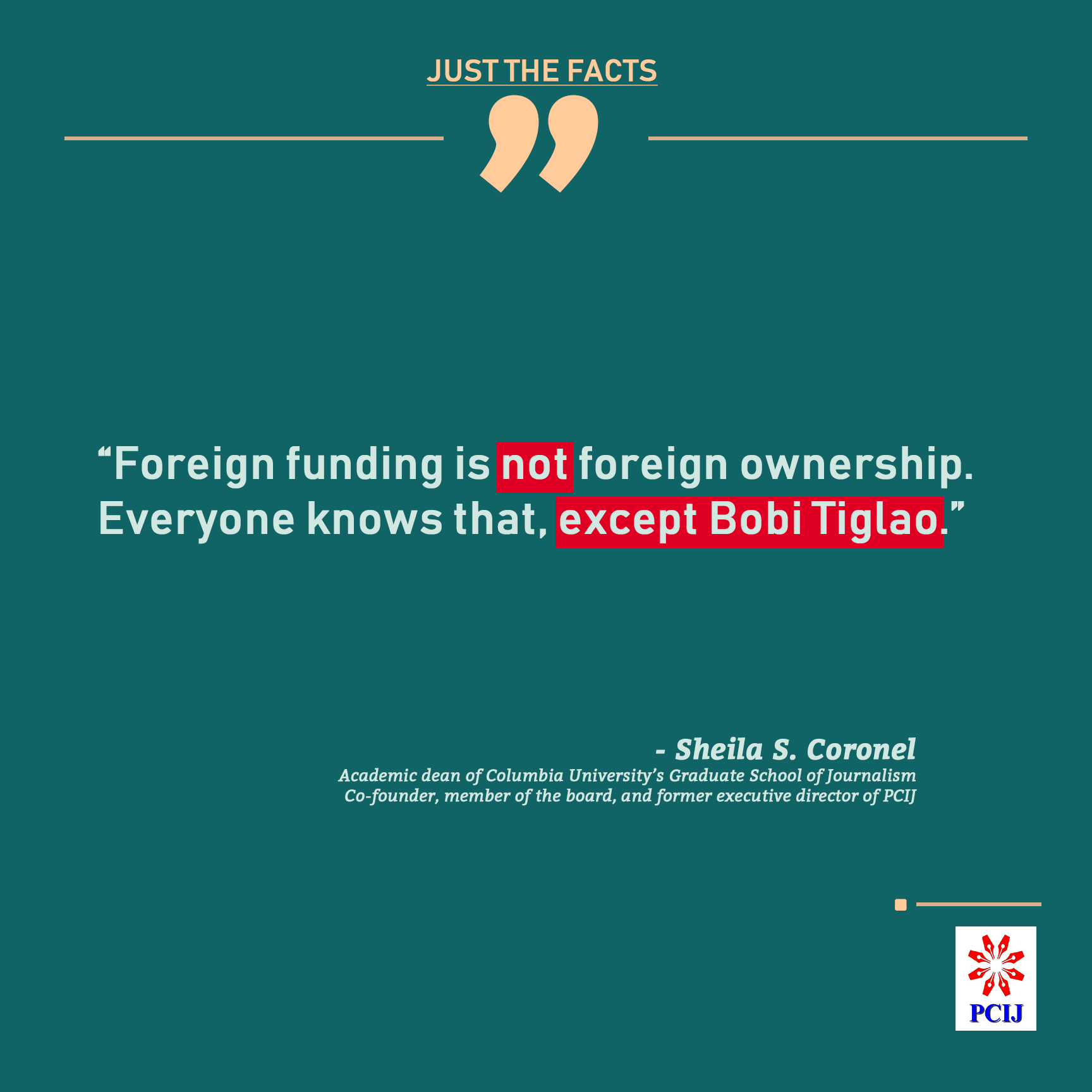 Since then, Bobi has morphed from being a fact-based journalist to an intellectual apologist for a clampdown on our hard-won freedoms. As a columnist for The Manila Times, he wants us shut down or in jail, based on spurious claims that we are somehow violating the Constitution and are “tools to advance U.S. hegemony over Filipino consciousness.”

This is really more than just a story of a friendship gone sour. It is an assault on the idea of an independent press and on the role of journalists as watchdogs of society. Bobi’s attack on us, since echoed by Yen Makabenta, another Times columnist, is straight from the playbook of Russian President Vladimir Putin. It softens the ground for a clampdown on the press and civil society.

In 2012, Russia passed a law that branded certain NGOs as “foreign agents” simply because they received foreign funding. In 2015, Putin signed an even more restrictive law that would allow the government to shut down foreign-backed groups it – and no one else – deemed “undesirable.” The Putin playbook — aimed at crushing critical voices and silencing civil society – has been used in several other countries, including Hungary and recently, Brazil. Now Bobi wants to bring it to the Philippines. 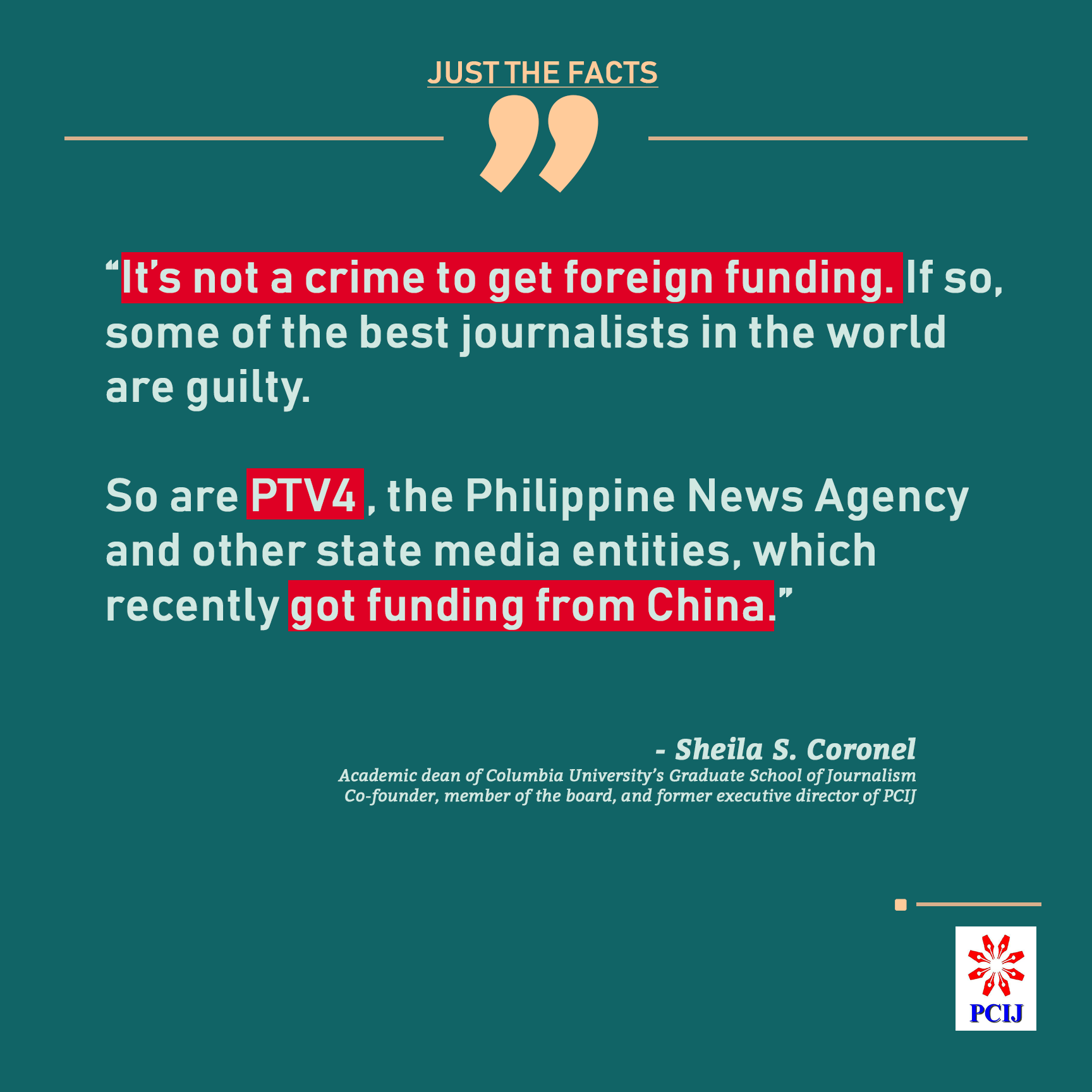 What a difference 30 years make. In 1989, in the wake of the fall of the Marcos dictatorship, we founded the Philippine Center for Investigative Journalism. The idea was Bobi’s – but like his notion of raising the bogey of foreign funding to muzzle the media, it wasn’t an original one. Bobi had visited the Center for Investigative Reporting in San Francisco and saw it as a model: an independent nonprofit devoted to accountability journalism. Unlike in a regular newspaper, such a center would allow journalists to devote time and resources to deep reporting on important issues.

We embraced the boldness of that idea. But we had no money. PCIJ’s first office was my bedroom; later, we moved to a borrowed space with two second-hand desks and one DOS-based computer. We didn’t even have a telephone. The nine founders – including Bobi and Malou Mangahas, PCIJ’s current executive director – pitched in P1,000 each and volunteered their services for free. After a year, we got our first grant from The Asia Foundation. That allowed us to hire an office manager and to give journalists fellowships to work on ambitious projects. We sent our stories to the newspapers and published books on corruption, the environment, and the media. 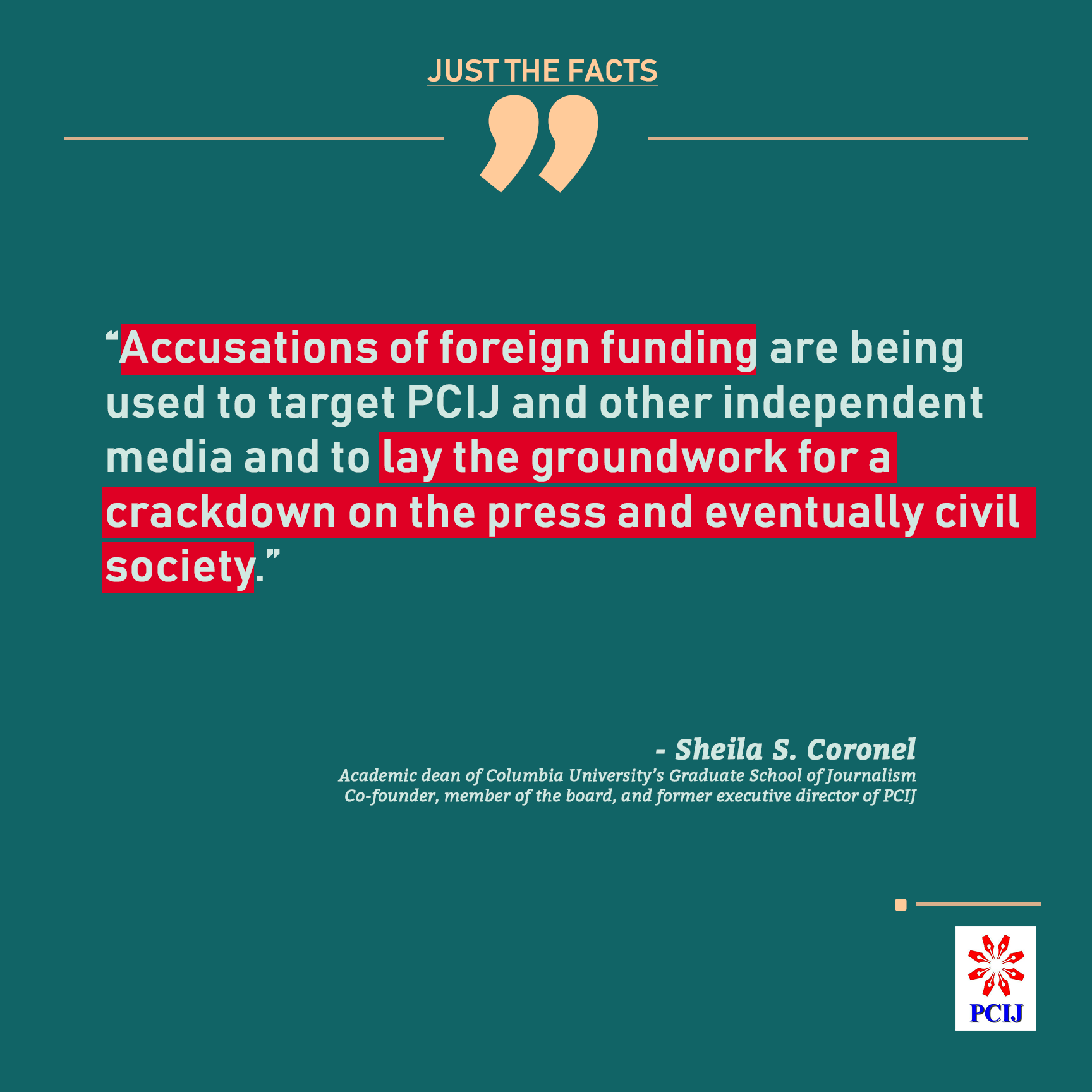 During the Ramos presidency, a Supreme Court justice resigned because of what we reported; so did a couple of Cabinet ministers. In 1994, we co-produced an award-winning documentary on toxic waste dumping by the U.S. military in its bases in Clark and Subic. That project was funded by a U.S. donor, the Ford Foundation, which never interfered in our editorial decision-making and didn’t even know about the documentary until it was aired. Bobi knows this because he was PCIJ’s treasurer at the time.

Over the years, multiple investigations were conducted because of our corruption exposés. In 2001, our reporting on President Joseph Estrada’s “millions, mansions, and mistresses” was used as evidence in his impeachment. In 2014, PCIJ tracked and questioned the Aquino government’s disbursement of public works and pork barrel funds.

Investigative reporting is resource-intensive and time-consuming; that is why many news organizations do not invest in it. As an independent, donor-funded nonprofit, PCIJ is freed from both commercial pressures and the business interests of media proprietors. Raising funds from local foundations or business groups could be fraught because they are all tied to local political or business groups. Foreign funds can give more independence. That’s especially true when they explicitly – as with PCIJ – are not involved in editorial decisions; and even more so when the money is put into an endowment that they no longer have any control over. Once you’ve given your money away, can you really dictate terms to the beneficiary? 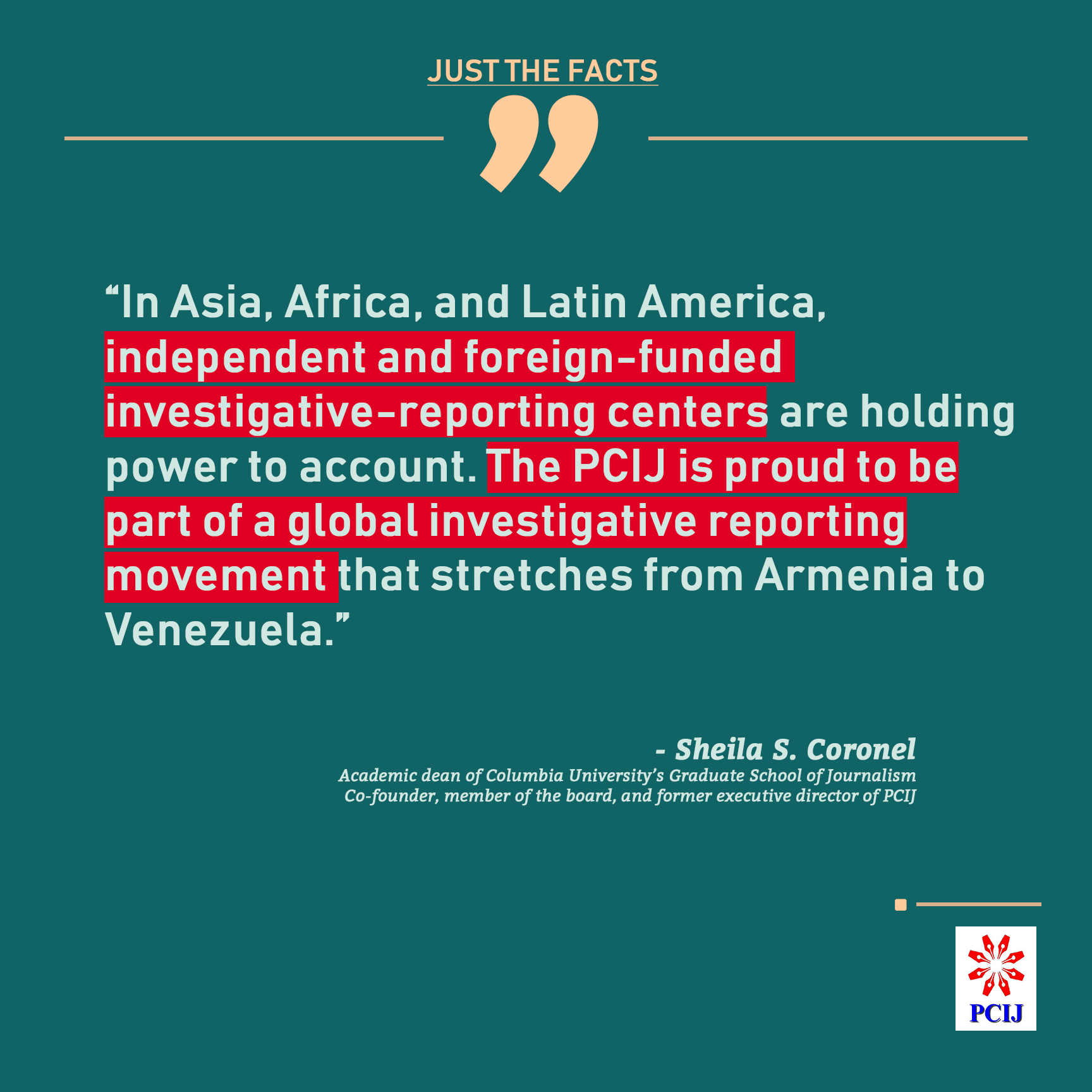 We were among the first, but there are now more than 150 independent, nonprofit, investigative reporting centers throughout the world. Nearly all of them are funded, at least in part, by non-local donors.

In Asia, Africa, and Latin America, independent and foreign-funded investigative-reporting centers are holding power to account. The PCIJ is proud to be part of a global investigative reporting movement that stretches from Armenia to Venezuela. Many of the 300 or so journalists who took part in the Pulitzer Prize-winning Panama Papers investigation on the offshore industry, released three years ago this month, were from nonprofit centers like PCIJ. That effort was spearheaded by the Washington D.C.-based International Consortium of Investigative Journalists, which is itself a recipient of funds not just from the United States, but also from European countries and Australia. The Guardian newspaper in the U.K. gets philanthropic funding from, among others, the Ford Foundation and the Bill and Melinda Gates Foundation.

Bobi didn’t use to think this was a bad thing – not even long after PCIJ started publishing its own stories online. In 1998, in an article he wrote for the Nieman Reports, Bobi sang us praises: “The PCIJ has helped change Philippine journalism. Two years after it started coming out with its investigative reports, the major dailies organized their own investigative teams and several newspapers now regularly have their own special, in-depth reports. It’s a success story of an NGO, non-governmental organization, committed to a specific cause and funded by both foreign and local development agencies.” (Emphasis ours.)

Today Bobi wants you to think it’s a crime to get foreign funding, despite his previous explicit support of it. If so, then some of the best journalists in the world are guilty. 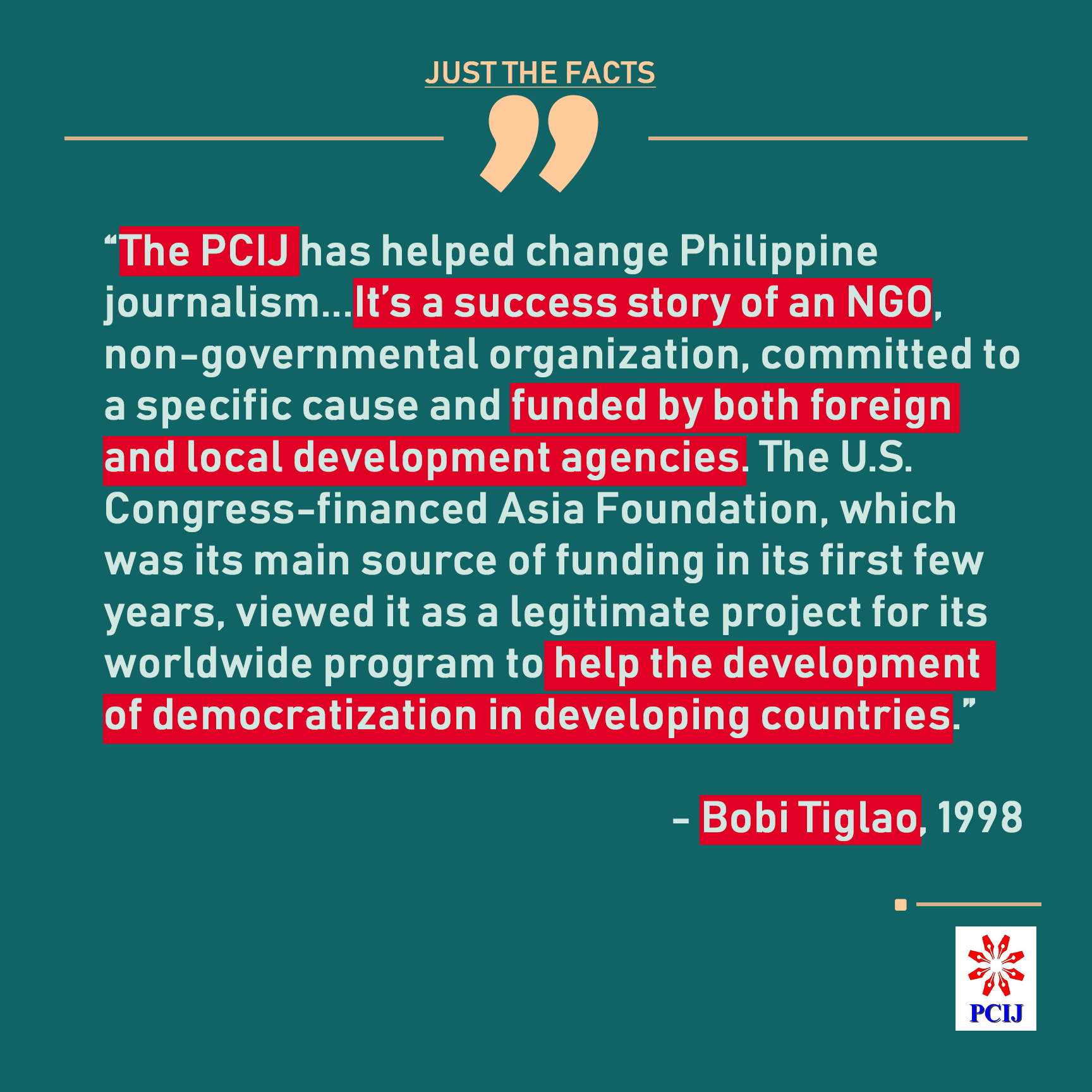 Bobi himself said he got a Nieman Foundation fellowship at Harvard paid for by The Asia Foundation, which another Times columnist calls a CIA front. The truth is that even state-run entities, including media agencies under the Presidential Communications Operations Office (PCOO) such as PTV- 4, the Philippine News Agency, and Radyo ng Bayan, get foreign support (of late, from China). The Constitution bans foreign ownership of the media, but this isn’t ownership. It’s funding. Indeed, PCIJ is nonstock, nonprofit. It isn’t owned by anyone, and certainly not by any foreigners. And, by the way, PTV-4 and the other PCOO media outfits aren’t foreign-owned either.

Bobi and PCIJ have clashed before. In 2005, when he was on the staff of then President Gloria Macapagal Arroyo, the PCIJ found evidence of election-rigging involving Arroyo; we released the “Hello Garci” tapes where Arroyo is heard ordering an election official to manipulate the count. We followed through with other stories on Arroyo’s and her family’s alleged involvement in various scandals, ranging from keeping secret bank accounts to getting money from illegal gambling. Perhaps those stories – the product of good journalism – holding to account an administration he was part of, are driving his anger at us?

Bobi remains loyal to his president. We at PCIJ do not begrudge him that. But we are sad that the man that we once held up, not just as a journalist but as a believer in press freedom, is now abusing and seeking to undermine the freedom for which so many of his – and our generation – fought and died.

We are even more concerned that by raising the foreign funding bogey to target PCIJ and other independent media, he is laying the groundwork for a crackdown on the press – and eventually, on civil society – based on emotive appeals about foreign interference that have zero grounding in fact. If the history of this country tells us anything, it is that freedoms are hard to win, but easy to lose. 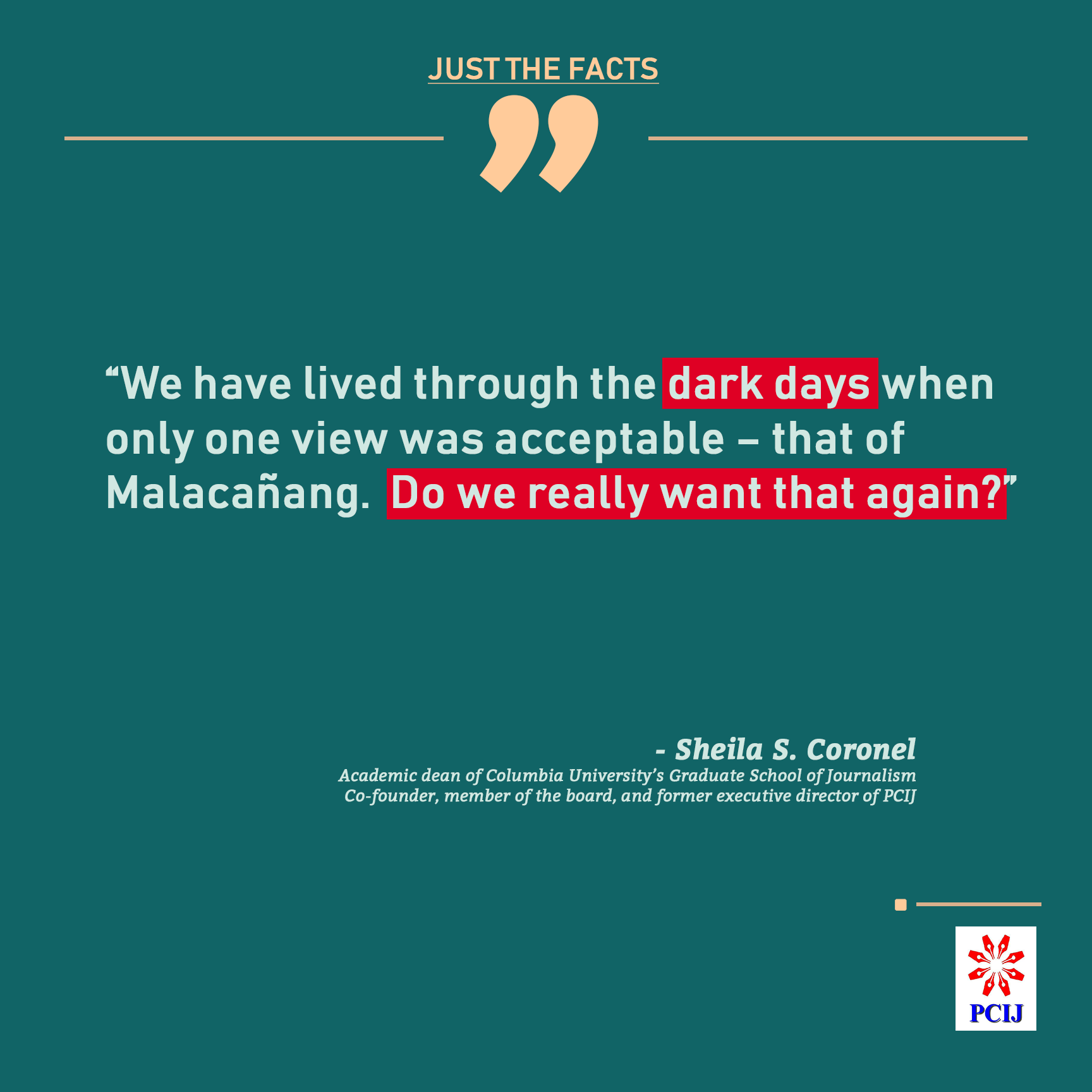 We have lived through the dark days when only one view was acceptable – that of Malacañang. In the newspaper I worked for then, we couldn’t even print photographs that showed Imelda had double chins. Do the Filipino people really want that again? — PCIJ, 2 May 2019

• Sheila S. Coronel is academic dean of Columbia University’s Graduate School of Journalism. She is a member of the board and former executive director of the Philippine Center for Investigative Journalism.