Mapping drug-war deaths, cases,
and helping those in need, online

FOR THOSE wanting to see an attempt to paint a nationwide picture of the drug war and all related efforts, this website may be up your alley.

A platform mapping the location of death of those reportedly killed because of links to illegal drugs, as well as services, efforts, rehabs, and other information related and created in response to President Rodrigo R. Duterte’s anti-drug campaign was launched this week and can be accessed via website angpangako.net, or Bayanihan Para sa Kapwang Nangangailangan. 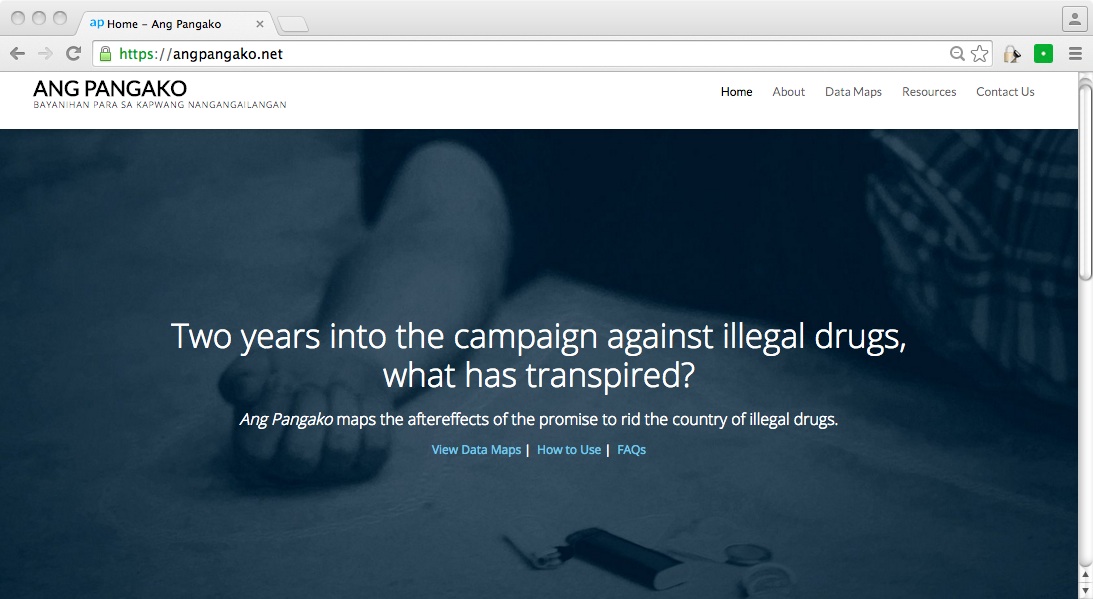 On April 26, the Foundation for Media Alternatives launched the website featuring three main interactive maps that viewers can customize and explore based on the information they need: a dedicated map featuring selected services and efforts, another interactive view of rehabilitation centers located across the country, and an effort of mapping out location of the victims of Duterte’s so-called “war on drugs.” 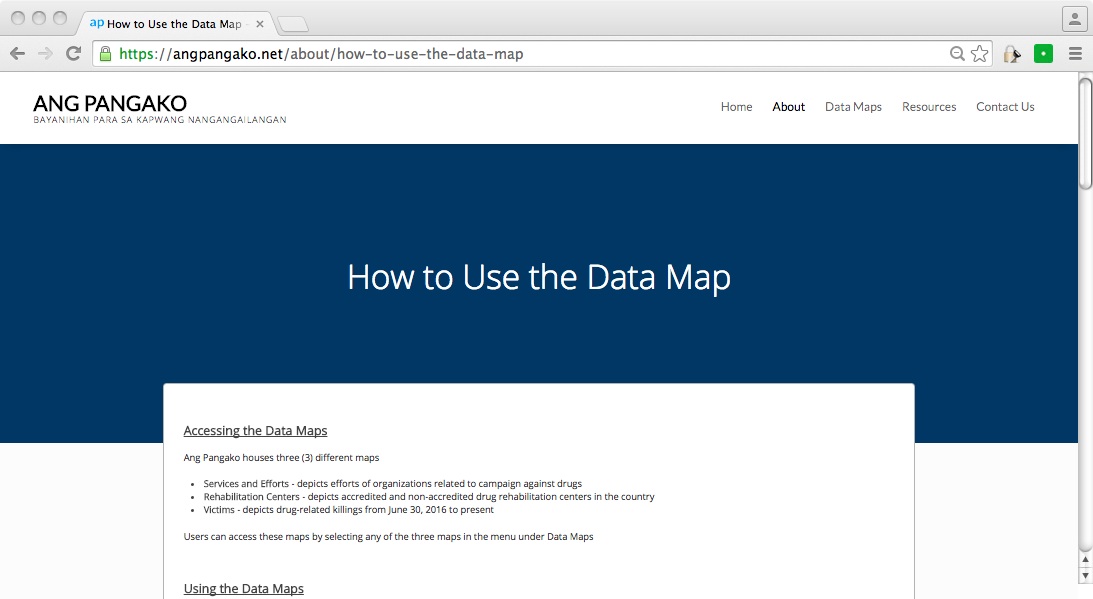 The map for related services and efforts are divided into 10 categories:

All entries pinned on the map can be clicked to reveal the name of the service and the organization involved, a description of the effort or service, and a link to its online platform or social-media page. 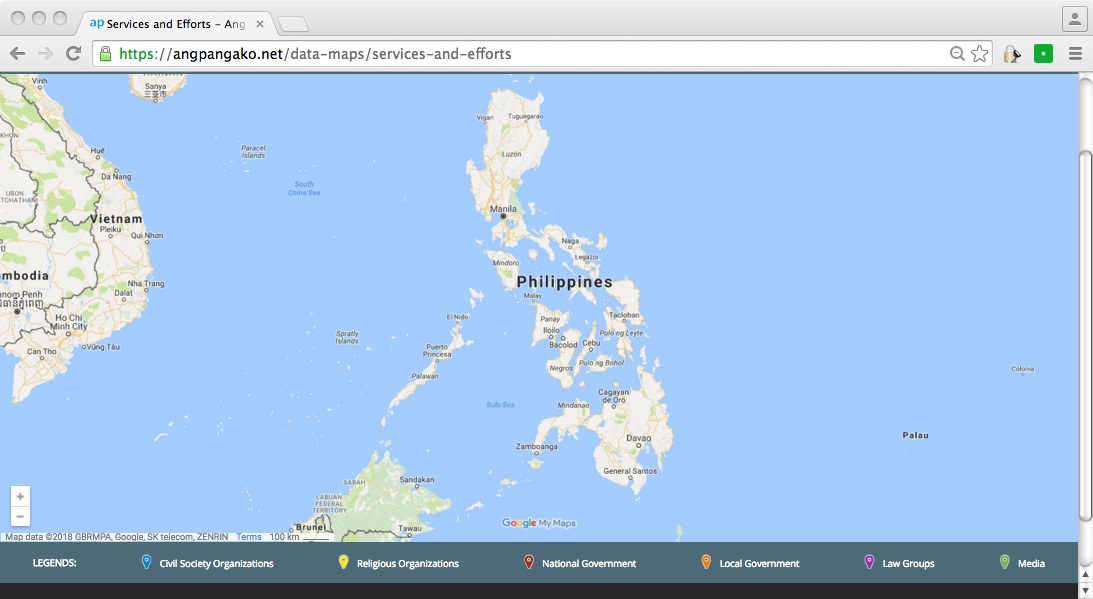 When viewers click the marker of each rehab, they will see the name of the rehab center, its classification (government-owned or private), its rehab modality, its capacity, the sex of those that can be admitted in the facility, contact details, and its official address. 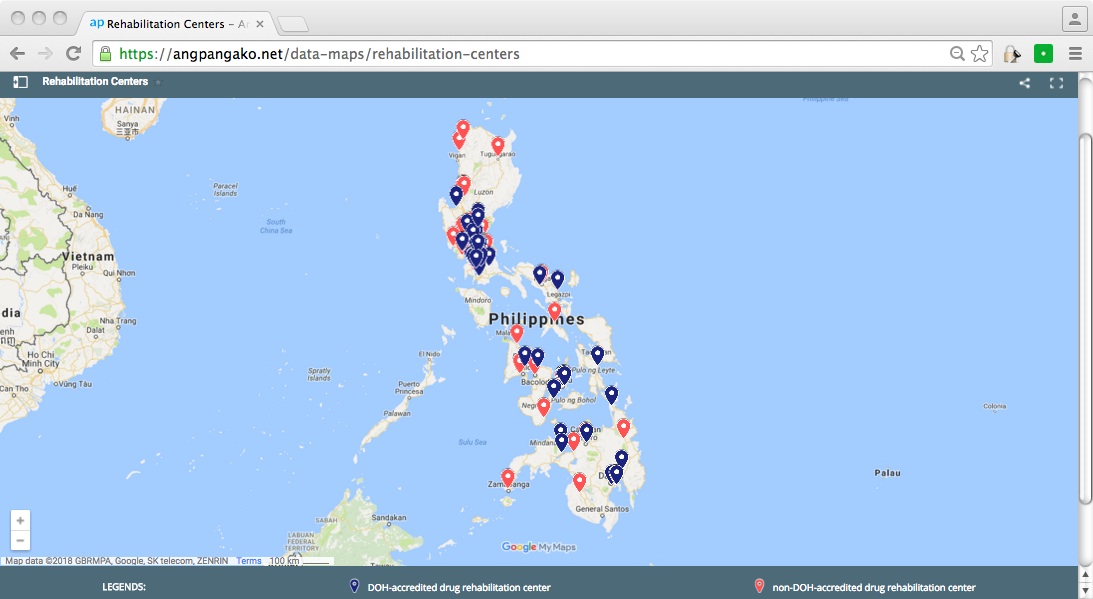 Viewers can also choose to tick off both accredited and non-accredited to see the whole spread, or just choose one of the two classifications. Users can also zoom in on their areas to see which drug rehab centers are nearest to their location.

The last — and seemingly the most extensive — of the three interactive maps is an effort to map out all reported drug-related killings by online sources.

It lists more than 1,900 male victims of the killings during the campaign against illegal drugs, as well as 165 female victims, and 37 reportedly “unidentified people” whose sex were not specifically mentioned in the reports.

Each victim’s pin on the map include the name of the victim, as well as his or her age, date killed, time, “drug relation, details of the killing and other pertinent information, and the link to the information source’s original report. 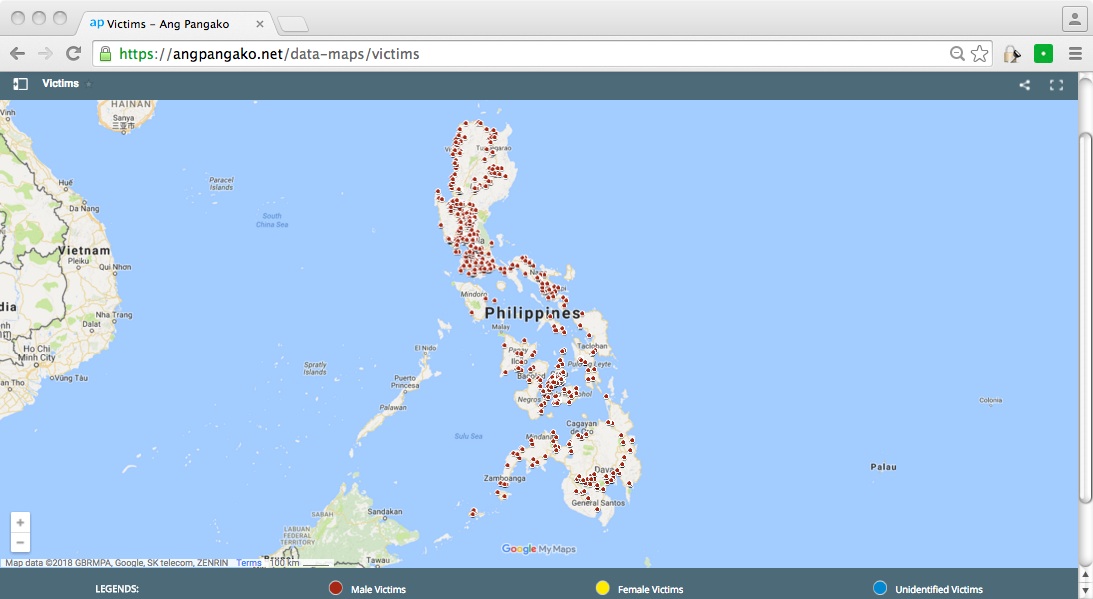 They also warned against the possible misuse of information on the website to further create a hostile environment for communities victimized by the drug war. Some wondered aloud as well if it would be possible to track or get information about those interacting with the website.

In response, FMA Executive Director Liza Garcia pointed to the privacy policy of the website, which lists the following information the platform gets from the website’s visitors:

On the website itself is a notice that it collects these data from visitors to “primarily to help keep the site safe and secure. In addition, [the data] may also be used for bug tracking, investigations relating to a security or data breach, and usage statistics.”

Garcia also explained that all information found on the website had been reported by the media since the start of the campaign in 2016, and that the sources are cited through the page.

She encouraged fellow human-rights defenders to share the information they have about drug-war victims not included among the names found on the website, so that the map can paint a more complete picture of the killings during Pres. Duterte’s drug war.

It also reported that among homicide cases recorded by the PNP, 2,235 of which were deemed as “drug-related incidents” and 413 of these cases are already solved while 1,822 were reported as “cases under investigation”.

FMA has clarified that the platform is still a work in progress, and that all tips and insights, as well as additional information and data would be very much appreciated from their human-rights defenders partners. In fact, the website includes a feature for reporting new leads, as well as sending comments and insights about the website.

In addition, the website has a “Resources” section, which contains memorandum circulars from the Department of the Interior and Local Government, Office of the President, and the Philippine Nation Police regarding the campaign against illegal drugs, along with pertinent laws. – PCIJ, April 2018