THE EXPENDITURE totals usually don’t quite add up and tallies from different entities don’t match. But there is no question that among those who strike it big during elections are media outfits, and the 2016 polls proved no different.

As in elections past, TV emerged as the platform of choice of the candidates for national office for their political ads that ran during the three-month campaign period. Nine TV stations in particular got the majority of these ads, which – based on receipts and ad contracts submitted to the Commission on Elections — ran up to at least P3.6 billion worth or 90 centavos for every peso that the candidates spent on ads.

These lucky nine TV stations are mainstream giants ABS-CBN, GMA 7, and TV5, along with the channels and relay stations they operate outside Metro Manila; the cable TV channels 2nd Avenue, Basketball TV, ETC, Jack TV, and Solar Sports; and the Pampanga-based CLTV.

Radio came second to TV in terms of ad buys from the candidates. Again based on receipts and ad contracts submitted to Comelec, at least 163 radio networks and stations snared a total of P378 million or 9.5 percent of the entire value of the national candidates’ political ads that ran from Feb. 9, 2016 to May 7, 2016.

The balance of pol-ad monies went to online, print, and combined TV and radio, the documents received by Comelec show. Although most of the sums presumably paid for 30- and 60-second ad spots, some were used to secure supposed TV features and radio interviews.

Comparative figures generated by Nielsen Media’s monitoring of political ads run during last year’s official campaign period yielded similar trends, with most of the ad buys also going to TV. Nielsen Media’s numbers, however, were far more than those based on documents submitted to Comelec. For instance, Nielsen said that TV’s share of the pol-ad bonanza came to P6.66 billion or nearly double the number based on Comelec documents. It also said that radio took as much as P1.7 billion in ad buys, or more than triple the figure derived from receipted ad contracts from Comelec. Nielsen said as well that the ads en toto amounted to P8.4 billion — more than double the comparative number from papers submitted to Comelec.

In any case, here’s what the media outfits themselves reported as having collected from pol-ad spending by the national candidates and the political parties during the official campaign period last year: 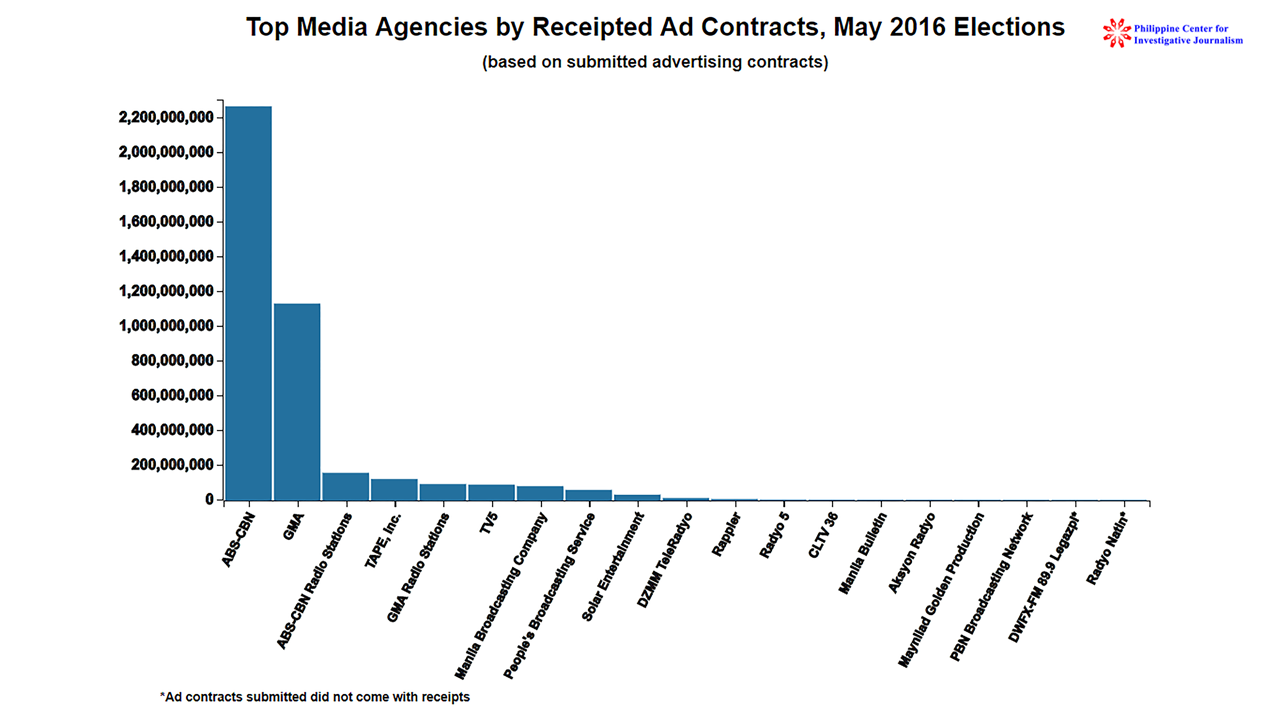