Davao Region most favored; others
get cuts, token hike in infra budgets

IT’S AS GOOD as it gets for Davao Region, home and bailiwick of President Rodrigo R. Duterte.

And by the government’s own data, it’s as bad as it gets for many other regions of the country in terms of the spread of monies for civil-works projects, although a few have also managed to receive slight boosts.

There seems to be great promise though that this year, several regions have started to get more blessings in terms of infrastructure funds — apparently because there is more money to pass around from public funds, loans, and grants. 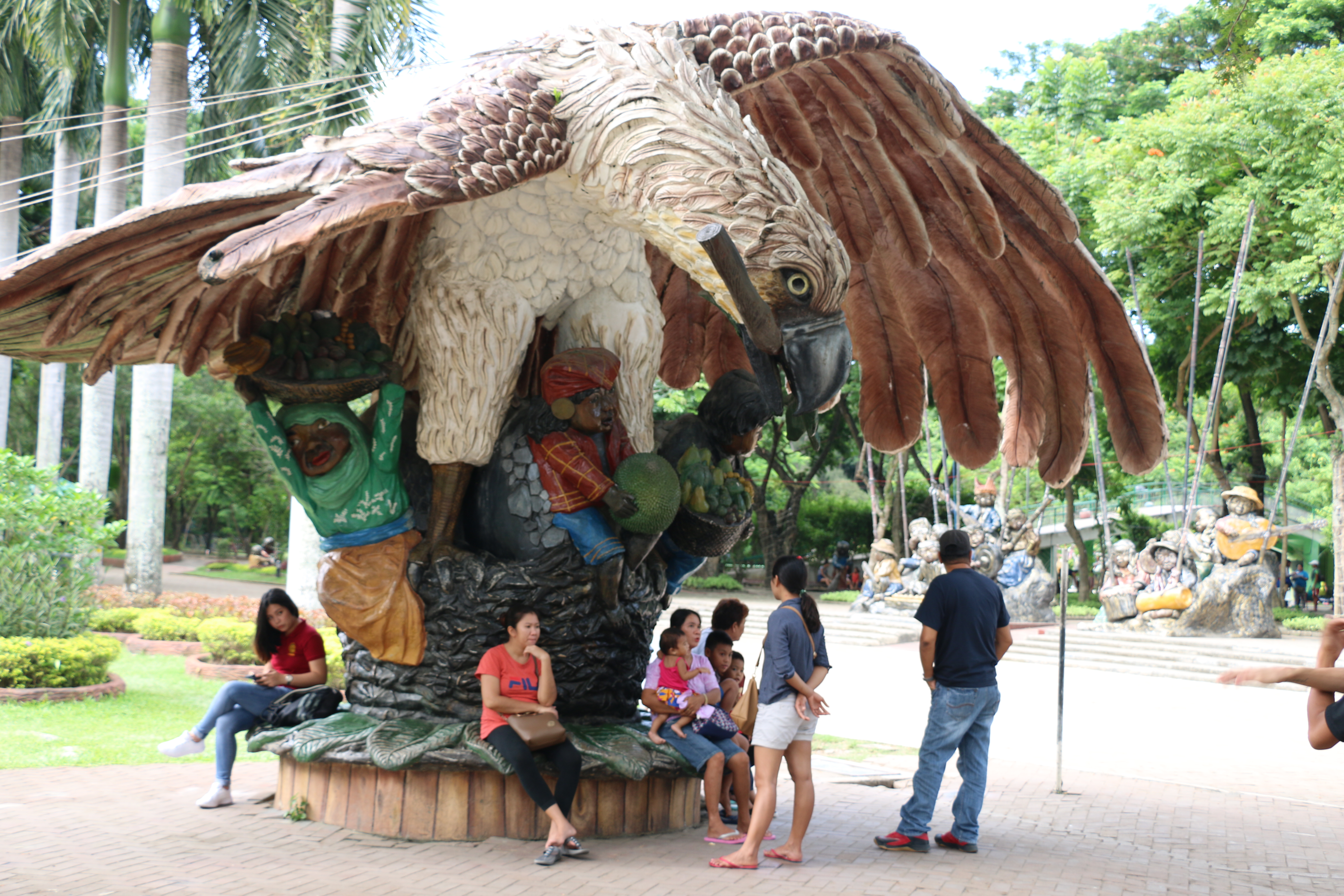 The 2018 budget for capital outlay of the Department of Public Works and Highways (DPWH), for distribution among the 16 regions (excluding the Autonomous Region in Muslim Mindanao) increased by 44.94 percent to PhP613.1 billion, including PhP40.9 billion “for inter-regional/nationwide projects.”

In 2017, the agency’s capital outlay to be distributed among the 16 regions totaled PhP423 billion, including Ph40.6 billion for “inter-regional/nationwide projects.”

But from 2016 to 2017 under Duterte, two regions suffered budget cuts, three got negligible increases, and the rest just a billion to at most six billion pesos more in civil-works contracts.

As if this were not enough, this year the region’s civil-works programs got a super uptick again: PhP56 billion, or another 27-percent increase in capital outlay under DPWH’s 2018 Infrastructure Program.

By all indications, Duterte has vested Davao the most-favored region status with a 146-percent total increase in its civil-works budget in the last two years. 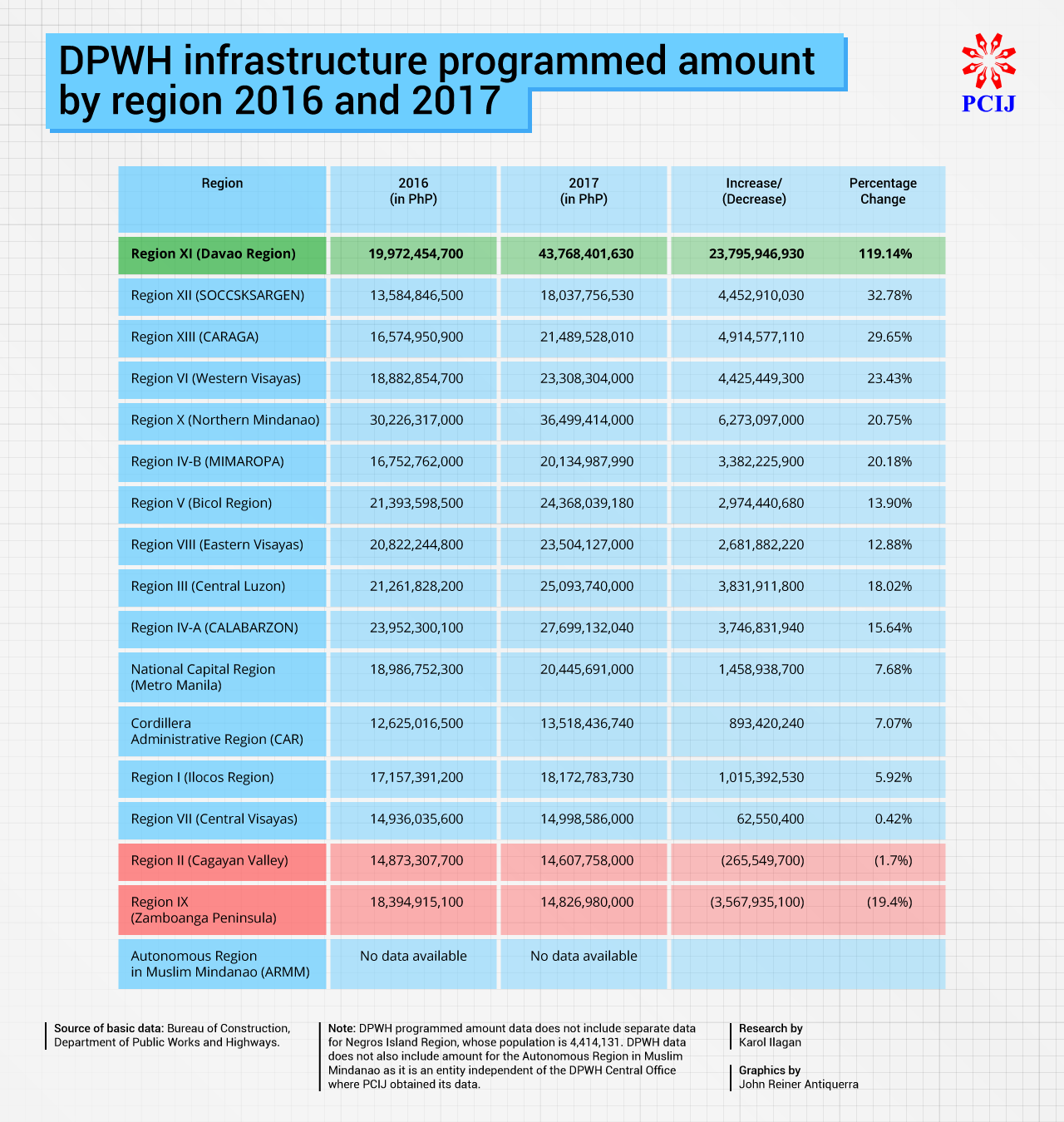 To be sure, Aquino and before him, former President Gloria Macapagal Arroyo, had also clearly taken care of their similar home region and bailiwick of Central Luzon. Duterte’s immediate predecessor belongs to the Aquino and Cojuangco clans of Tarlac province, while Arroyo hails from Pampanga province.

Western Visayas was on top in 2014, and Northern Mindanao in 2016. CALABARZON meanwhile has consistently been in the top three from 2010 to 2017.

Yet in its big comeback under Duterte, Davao Region’s 119-percent increase in its civil-works budget from 2016 to 2017 is exceedingly skewed compared with the just 86.8-percent composite increase in the civil-works budget of Metro Manila and six Luzon island regions — Cordillera Administrative Region, Ilocos Region, Central Luzon, CALABARZON, MIMAROPA, and Bicol Region—for the same period.

A seventh Luzon region, Cagayan Valley, even suffered a budget cut of 1.7 percent.

Then again, the combined population of the three Visayas island regions comes up to 14,959,300, as of 2015 official data.

But then a fourth Mindanao Region, Zamboanga Peninsula, recorded a 19.4-percent drop in its civil-works budget. No data could be obtained from the DPWH for the Autonomous Region in Muslim Mindanao or ARMM.

Interestingly, while the Mindanao regions as a group got twice more money for civil-works projects under Duterte, the island accounts for only half the combined population of Luzon’s seven regions. 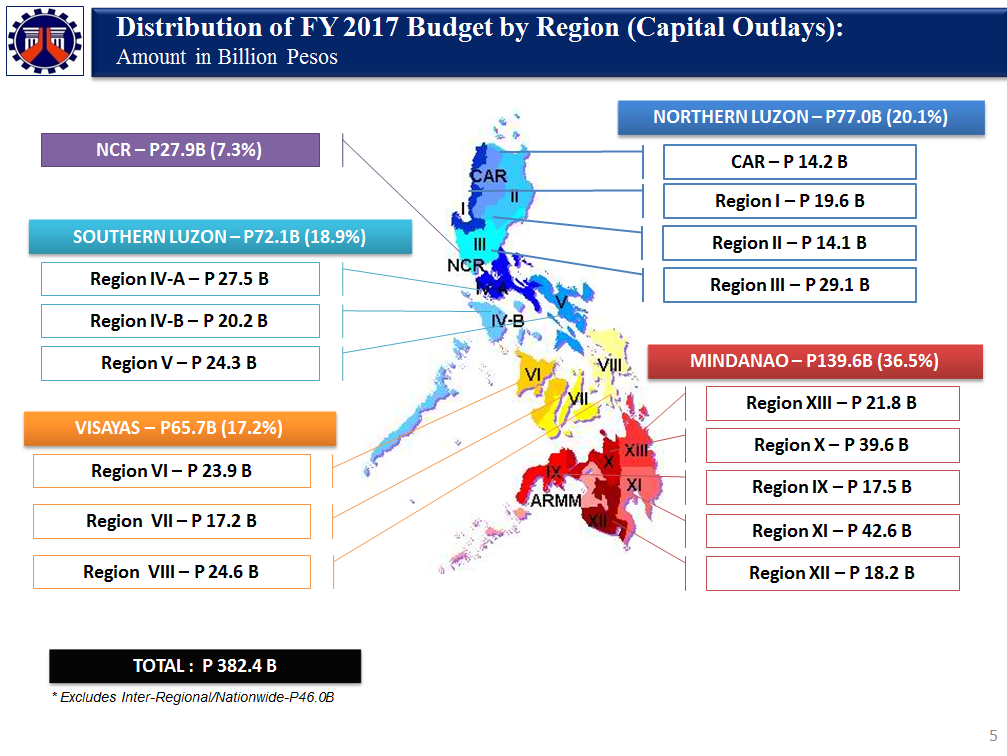 The smallest budget increase in 2017 for civil-works projects was given to Central Visayas: a mere 0.42 percent. The National Capital Region and the Cordillera Administrative Region fared a little better, but still paled in comparison with the rest; both saw their respective civil-works project budgets rise by just seven percent more from 2016 to 2017.

This is how the civil-works budgets of the regions across the country looked like from 2016 to 2017, in cold cash: 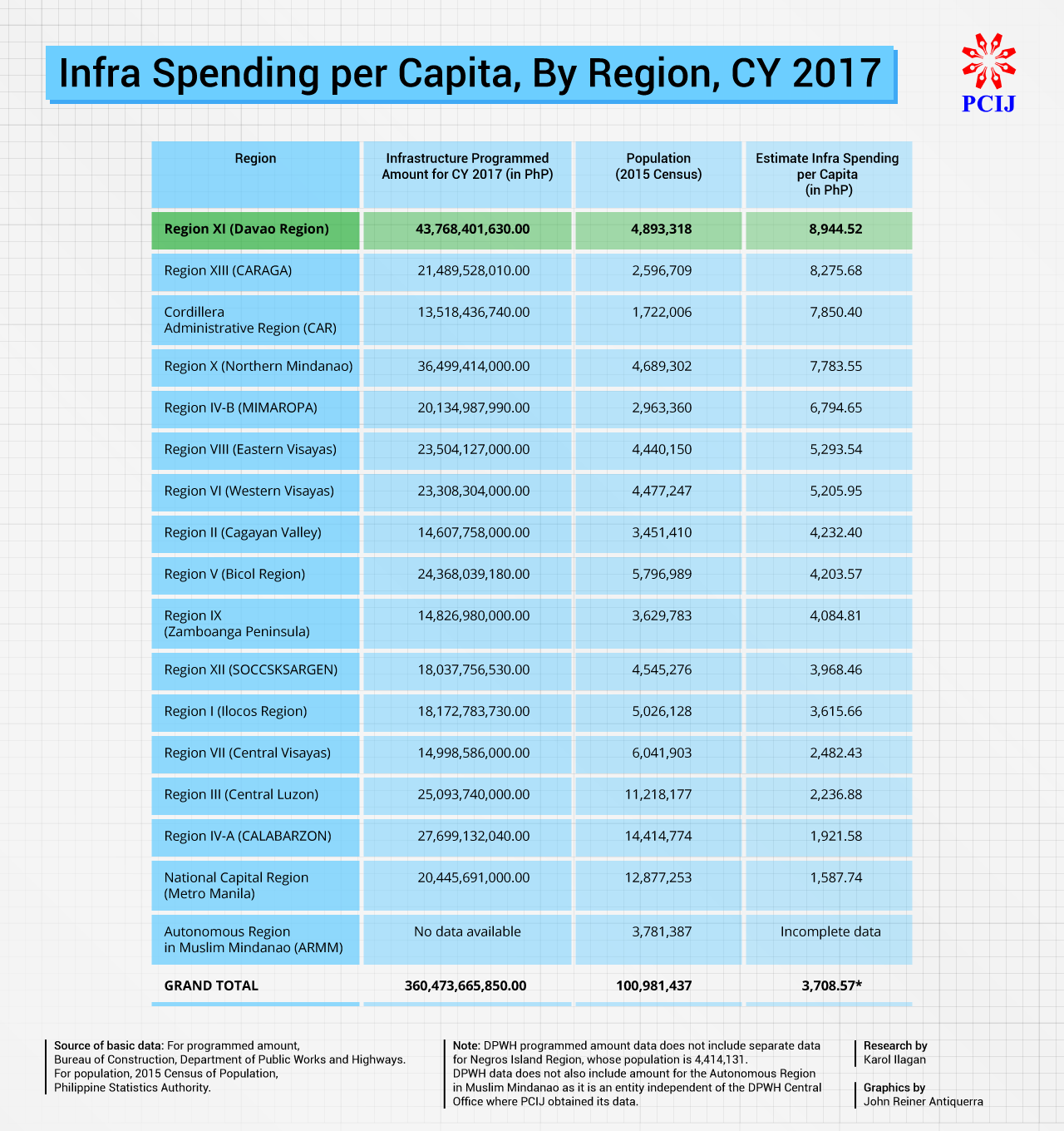 Analyzed for per capita spending, by population, the numbers suggest that more funds have been allocated for people in some regions that for others, and yet again, Davao Region emerges as the big winner.

This implies an unusual scenario, however: That for every resident of Davao Region, DPWH is spending twice more money than the national per capita per population cost of civil-works projects.

The most populous regions, CALABARZON, Metro Manila, and Central Luzon, got the lowest per capita spending. 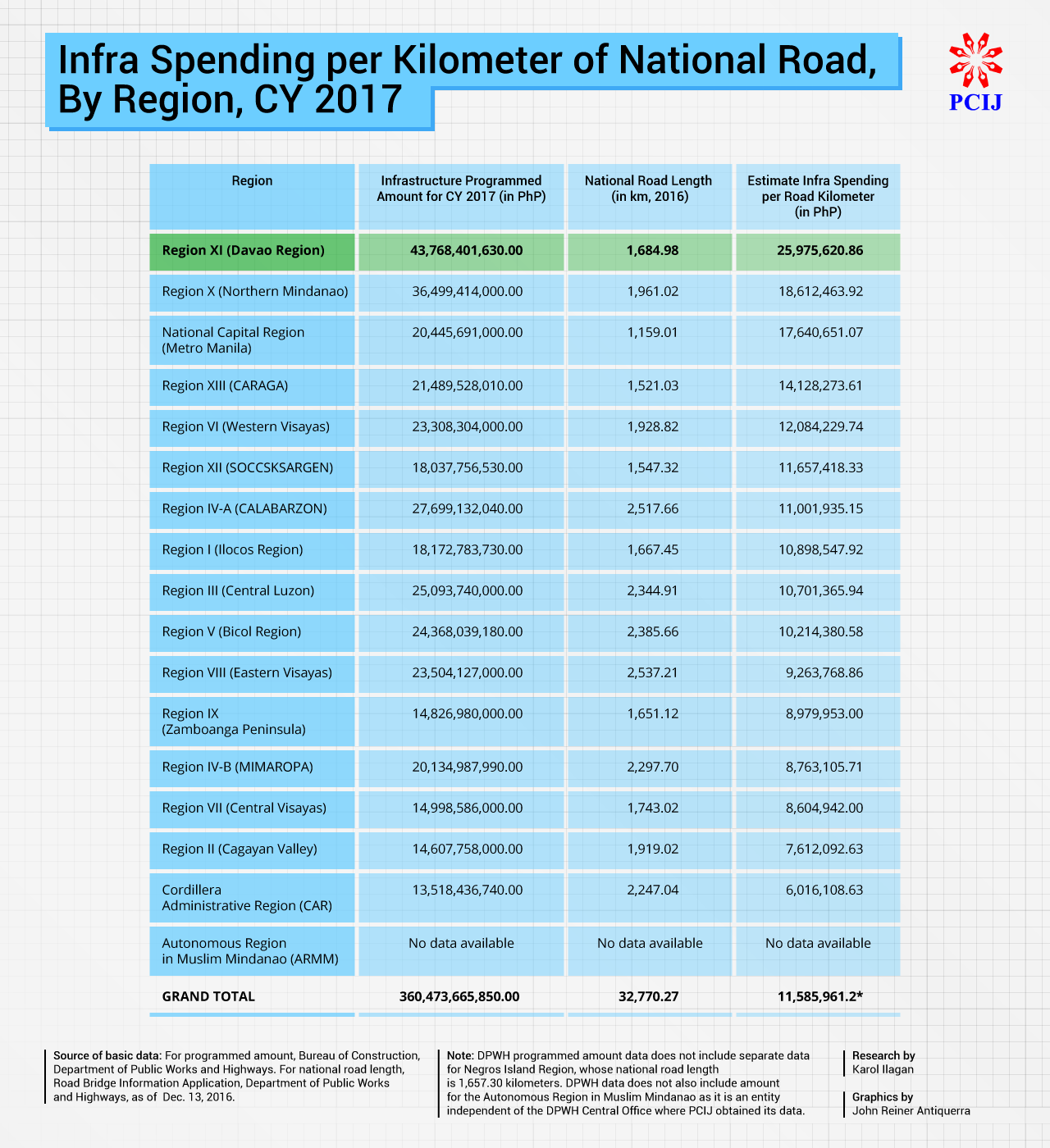 Computing for infrastructure spending per national road kilometer is another mode of inquiry.

The data show that in 2017, DPWH allocated PhP25.9 million per road kilometer in Davao for its 1,684.98 kilometers of national roads.

Yet again, Davao Region’s per capita infra spending for 2017 surpassed the average national spending per capita per kilometer of national road by more than twice more. 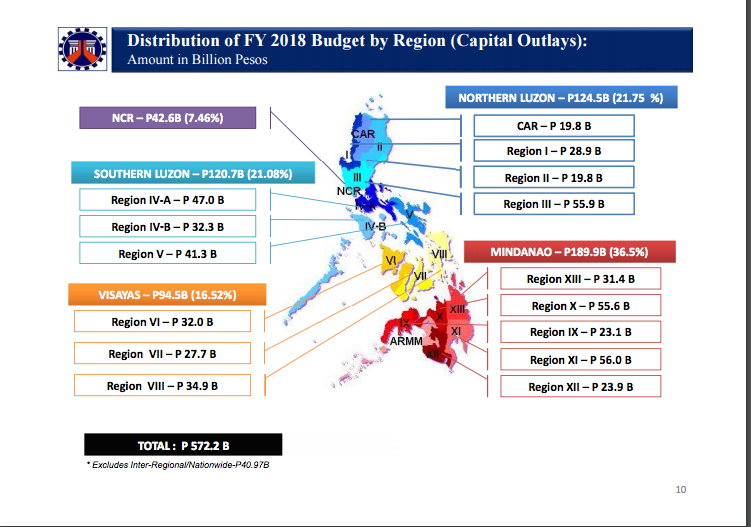 This year, under its PhP613.1-billion budget for infrastructure (capital outlays), DPWH said the allocations for the regions follow:

In this spread of public works monies, DPWH said that Northern Luzon has been allotted 21.75 percent of the total, Southern Luzon 21.08 percent, the Visayas 16.52 percent, and NCR 7.46 percent. Mindanao gets a bigger 36.5 percent.

By the amount of infrastructure budgets they will get from DPWH this year, this is how the regions rank from highest to lowest: Davao Region, Central Luzon, Northern Mindanao, CALABARZON, NCR, Bicol Region, Eastern Visayas, MIMAROPA, CARAGA, Ilocos Region, Central Visayas, SOCCSKSARGEN, Zamboanga Peninsula, and Cagayan Valley and Cordillera Administrative Region. 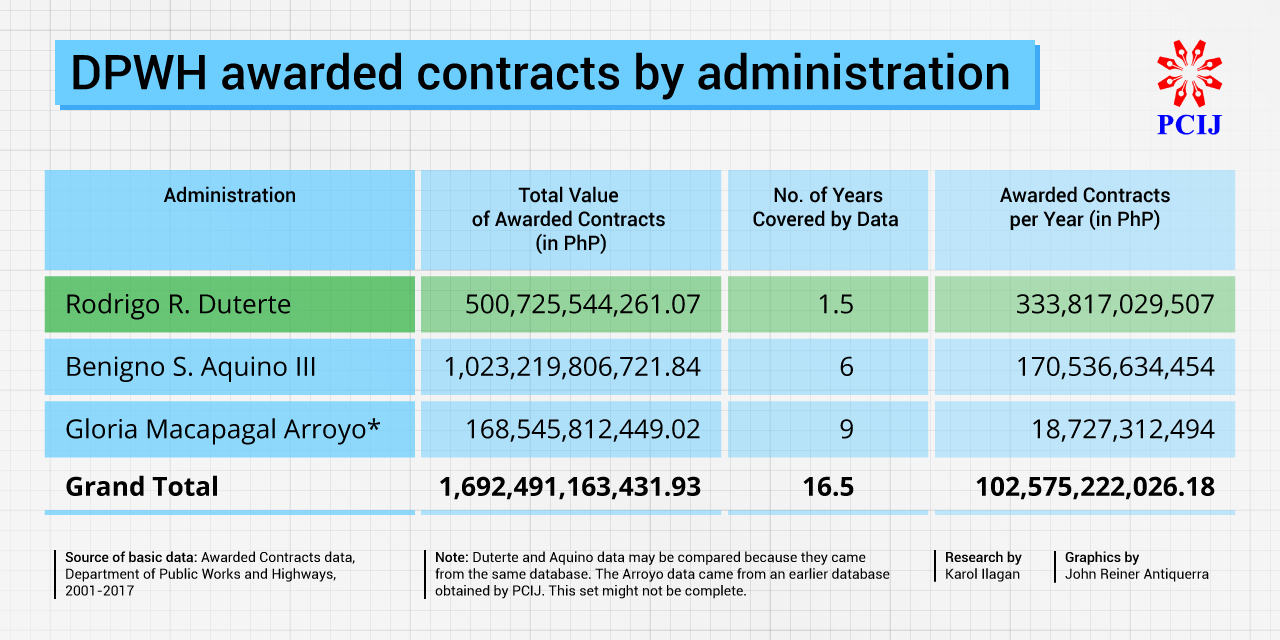 Under the Duterte administration, DPWH has awarded an estimated 19,810 projects per year since July 2016. This is more than the average number of DPWH projects awarded during the Aquino administration of 17,042 contracts per year. The data covered Aquino’s full six years in office, while the data for Duterte covered only 1.5 years, or from July 2016 to December 2017. 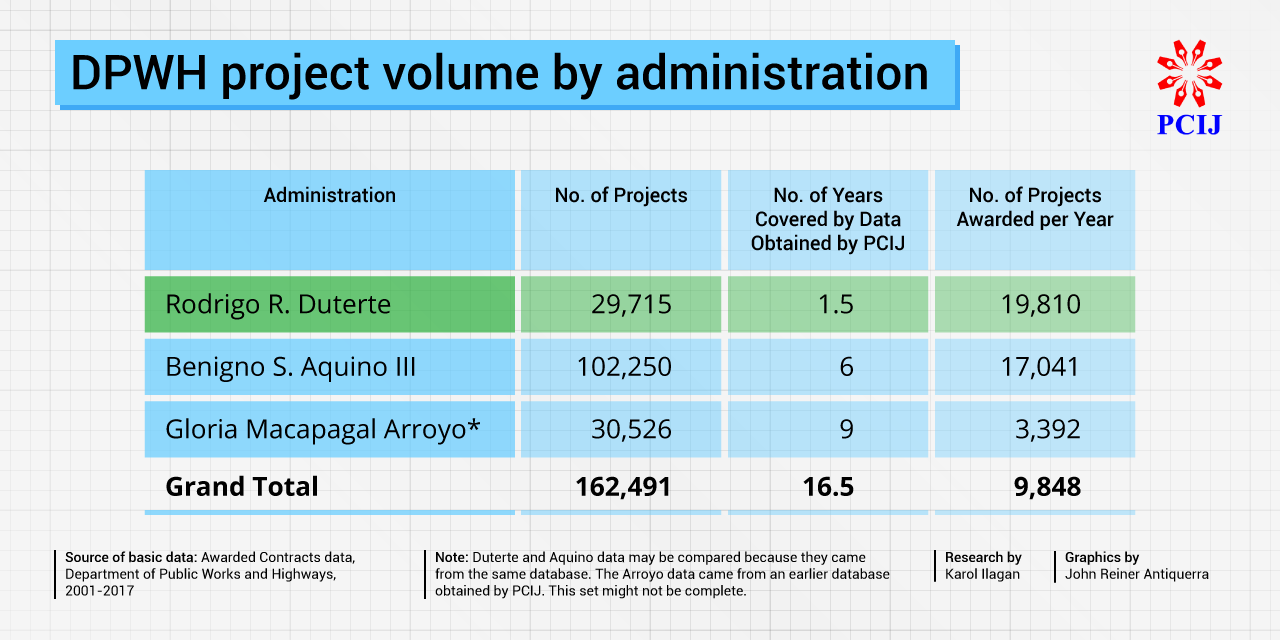