MYANMAR: Press Freedom in More Peril Than Ever 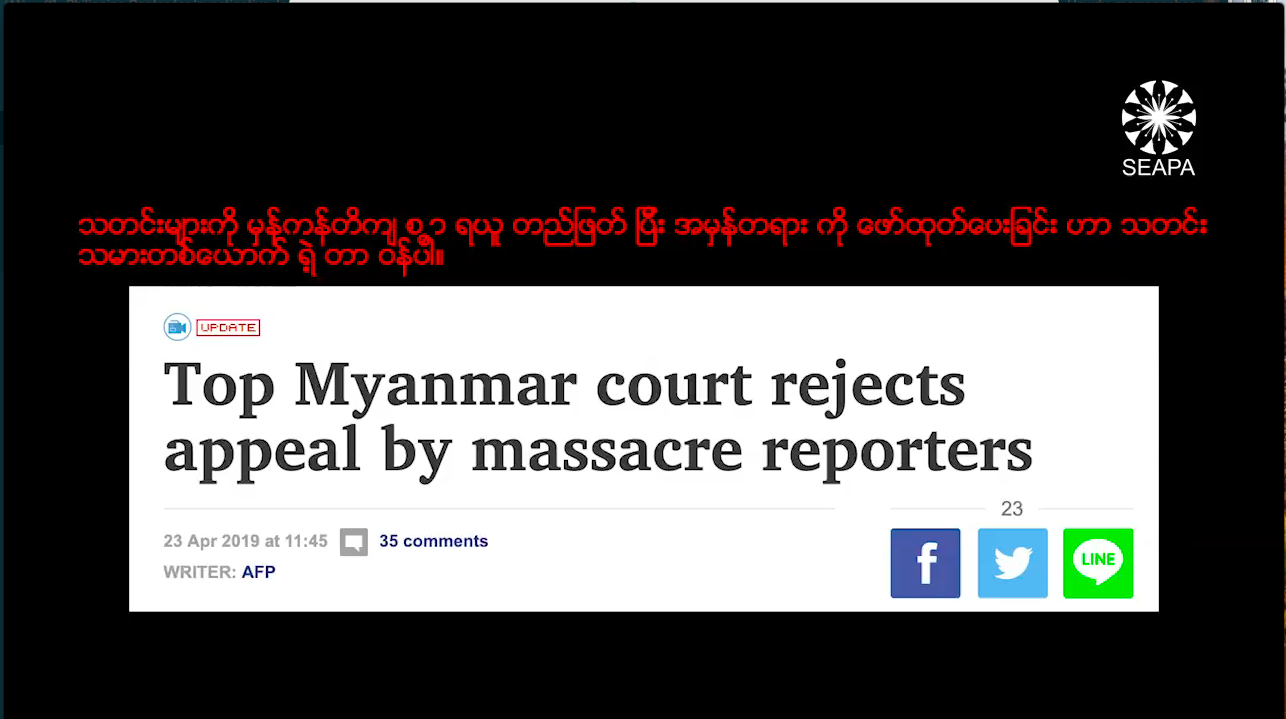 IN DECEMBER 2018, Myanmar’s Minister for Information Pe Myint gave lie to global reports that offered a grim prognosis of press freedom in the former pariah state.

Speaking before an audience of journalists, dignitaries, and civil-society representatives, he said that press-freedom indexes are biased and that the freedom- and rights-ranking mechanisms of international organizations are not transparent enough.
He also said that state-owned newspapers play an essential role in bridging the divide between the state and the public, adding that they will continue to exist regardless of the government in power.

The minister — a writer himself — then said that journalists, as an act of civic duty, must be faithful to their country, and should not forget their responsibility to protect and love it.

The speech had been given at the Seventh Media Development Conference in Nay Pyi Taw. The annual event brings together private and state-owned news outlets, public officials, academics, civil society, diplomats, and international organizations, to tackle issues affecting the media in Myanmar. In previous years, it had always taken place in the old capital, Yangon.

That it was now being held in the seat of the government and had the information minister giving an adversarial yet not unusual speech were not lost on the conference’s audience. In fact, most of them took the minister’s words as a sign that state expects even the private media to push the official narratives.

Shortly after the gathering, independent local media groups issued a joint statement denouncing his pronouncements, which they also said were irrelevant to media development in Myanmar.

Yet it was not as if they had expected to hear anything different anymore from an official of the Myanmar government, which now has Nobel laureate Aung San Suu Kyi as de facto leader.

“Media freedom is clearly not one of (its) priorities,” said the Paris-based Reporters Without Borders (RSF), which monitors freedom of information and press freedom across the globe. This is even though Daw Suu Kyi’s National League for Democracy (NLD), the current ruling party, had press freedom among its targets for reform in its election manifesto.

In RSF’s latest World Press Freedom Index released in mid-April, Myanmar is ranked a notch lower (138th) than the previous year. Although it slid by just one rank, Myanmar had actually suffered a steep drop in the index in 2018, when it fell six places to 137 out of 180 countries.

This was apparently because of the December 2017 police entrapment and arrest of Reuters reporters Ko Wa Lone and Ko Kyaw Soe Oo who were then working on a story on the brutal military crackdown on Myanmar’s Rohingya Muslim minority. In September 2018, both journalists were convicted under the Official Secrets Act – just one of Myanmar’s draconian legislation stifling media freedom and free expression. Each received a sentence of seven years in prison with hard labour.

Legal and media groups quickly issued a statement that pointed out how the sentence meted out to the reporters was essentially a gag on the press and an act denying the public’s right to information.

It also said, “The most important fact is that there would be no such reporting unless the massacre (of the Rohingya) happened. The fact that Myanmar has lost its reputation among the countries of the world is not because of their reporting, but because the massacre was committed.”

This was far from what the people of Myanmar — and the rest of the world — had imagined for this country of 54 million when Daw Suu Kyi won a Parliament seat in 2012, marking a historic turn in the nation’s political history, and when the 2015 elections made the NLD Myanmar’s governing party.

But here now is the reality: Under the administration of NLD, several lawsuits have been filed against members of the media, with some even being arrested and detained. For example, in 2016, Yangon’s regional government sued Eleven Media Group chief executive as well as its chief editor for defamation under the notorious article 66(D) of the Telecommunication Law. This stemmed from EMG’s publication of a commentary on Yangon Region Chief Minister suggesting corruption. The EMG executives spent nearly 10 weeks in prison and trial is still ongoing. There have been other arrests of EMG journalists and editors as well, over reports of allegations of corruption involving pubic officials.

In June 2017 the military, again using article 66 (D) of the Telecommunication Law, sued the chief editor and a columnist of The Voice Daily for a satirical piece on the government’s peace efforts with minority ethnic groups. The columnist was later released after two weeks, but both men found themselves facing fresh charges, this time under article 25(B) of the Media Law.

That same year three journalists from independent news outfits Irrawaddy and Democratic Voice of Burma were arrested by the military at a checkpoint after coming back from an ethnic armed group-controlled area and charged under the Unlawful Association Act — a colonial-era law. The junta dropped the case after the journalists spent 10 weeks in prison in northern Shan State.

Aung San Suu Kyi’s silence in the face of this unrelenting repression of the media has baffled many. She has barely said anything as well about the plight of the Rohingya, most of whom are now either dead or in forced exile.

At the World Economic Forum in Hanoi in September 2018, she finally spoke up about the two incarcerated Reuters reporters, but only because she had been asked directly about them.
Her reply was brief: “The court has decided that they (the two journalists) have broken the Official Secrets Act.”

To many, her answer smacked of total denial of the injustice heaped not only on Wa Lone and Kyaw Soe Oo, but on other Myanmar journalists who are being made to suffer for doing their job.