by The Philippine Center for Investigative Journalism
Thursday, February 14th, 2019

A “PROMOTIONAL TOUCHPOINT.” That, in advertising and PR parlance, is what social media apparently looks like to candidates for senator in the May 2019 elections, and they have been using it as such even ahead of the official 90-day campaign period, which started last Tuesday.

Because the use — and even abuse — of social media is practically free and unbridled, PCIJ launched this audit of how and what the candidates are posting, how often and where, and how much organic or boosted engagement they are drawing. Are their posts backed by heavily paid media push? Who have invested in small or big ways in social-media management? Who command small or big social-media machinery, or enjoy affinity with Filipinos online? 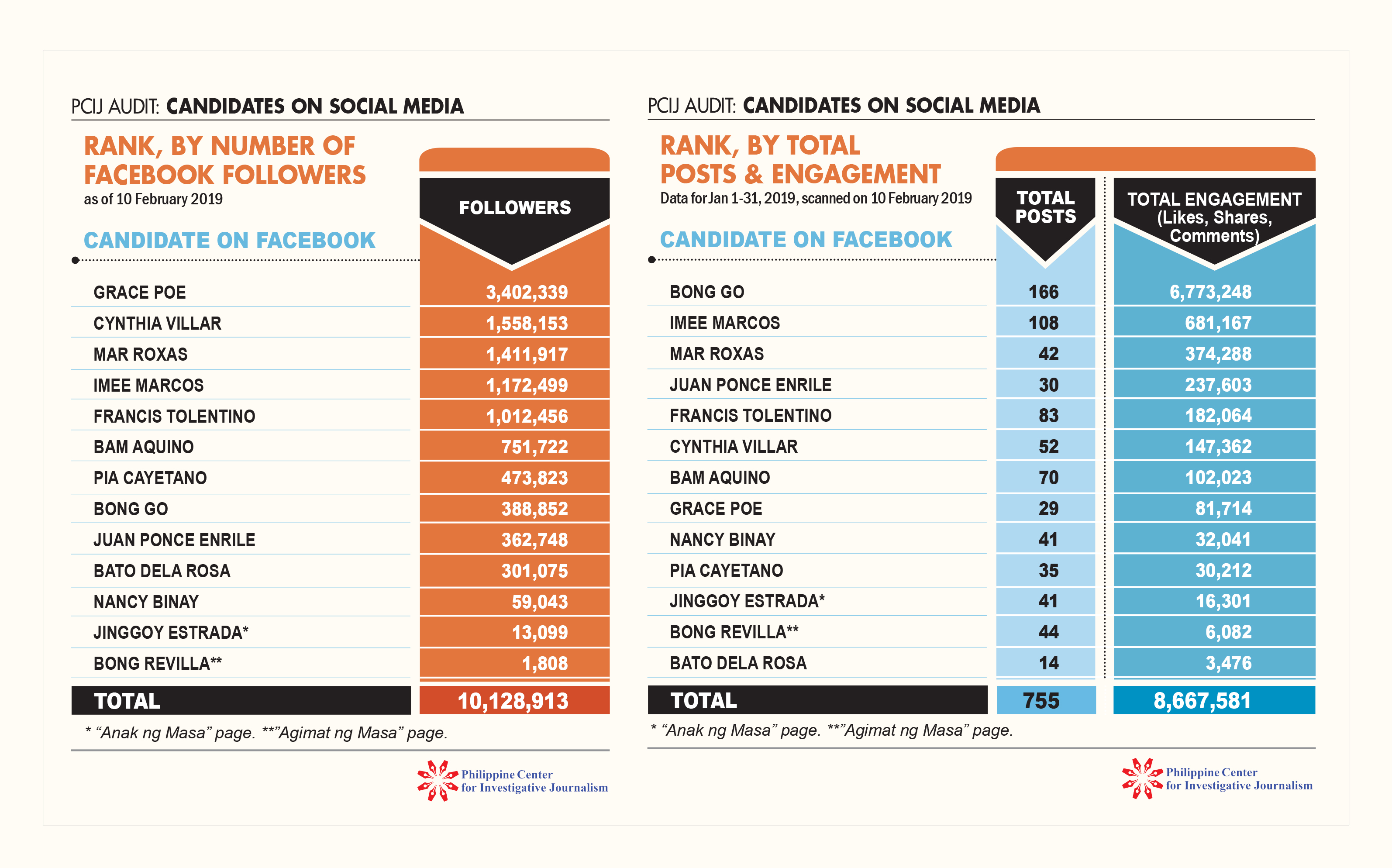 This audit covers 20 candidates for senator listed in Pulse Asia’s latest nationwide survey on the May 2019 Senatorial Elections that was conducted from December 14 to 21, 2018 using face-to-face interviews. These candidates are also among those most actively engaged in social media.

This audit offers information reflected from scans and observations based on the curated social-media posts of the candidates throughout the month of January.

It presents at best some discernible trends but does not assume or conclude that certain candidates have “paid” supporters/trolls, have resorted to boosting their posts, or are using advertising monies, unless stated otherwise with supporting data and documents.

The key figures presented, notably fan/follower base and number of posts and engagement, are the data gathered when this report was written on Feb. 8, 2019. There could be discrepancies in the key figures after this date because the fan/follower base and additional new posts of the candidates may have already either increased or decreased during the intervening days.

This report has two sections. The first is a Social Media Landscape Overview. It looks at which candidates are on which social media platform, and what they are doing there. This focuses on a rundown of the social-media assets where the 20 candidates for senator are active, with topline observation on their overall use of social media.

The second is a Content Scan of the Facebook pages of 13 candidates with more frequent activities on Facebook. It looks at who are saying what on Facebook, and how they are saying it. This section offers information on the total posts, total engagement, average engagement per post, and numbers of likes, comments, and shares reflected on the candidates’ Facebook pages. 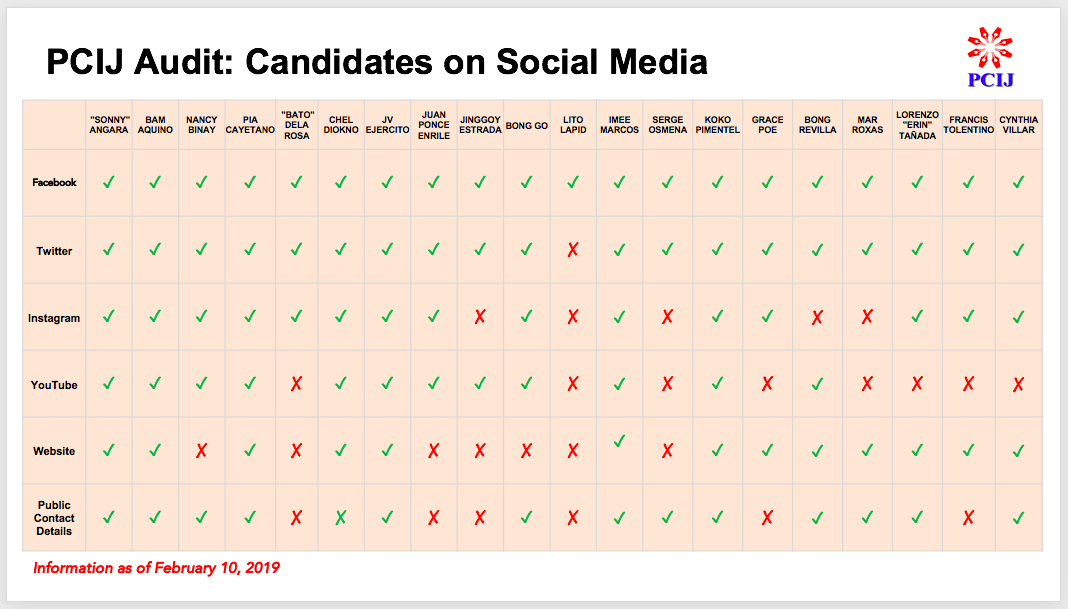 Their social media and communication strategies vary but all the 20 candidates covered in this audit are consistent about one thing: they have all turned to Facebook as their go-to social media platform of choice, apparently to reach the greatest number of Filipinos online.

The data gathered for this audit offer more insights:

• Majority of the candidates who use Twitter include those currently in office, running for re-election, or recently resigned from executive positions. They are regularly tweeting about their work at the Senate, posting photos of their events and links to press releases, or retweeting news articles associated with their efforts. These candidates have been posting more “editorial-type” content that depart from the more personal and lifestyle-slanted use of Facebook by its native followers.

• Certain social-media pages have apparently been created solely for the purpose of the upcoming midterm elections. These include the recently created “Anak ng Masa” page of Jose ‘Jinggoy’ Estrada and the “Agimat ng Masa” page of Ramon ‘Bong’ Revilla Jr. Both candidates have had existing social-media accounts prior to January 2019. Juan Ponce Enrile, meanwhile, has been active on Facebook way before, but Twitter and Instagram accounts have been set up for him recently, as additional channels.

• The websites or microsites of many candidates appear to be static and are not being updated regularly. The only exceptions are the websites of Ma. Imelda ‘Imee’ Marcos and Paolo Benigno ‘Bam’ Aquino IV that feature regular content uploads of press releases and other engagement materials. The other websites contain key information about the candidate only, i.e., Jose Manuel ‘Chel’ Diokno, Lorenzo ‘Erin’ Tanada III, and Pia Cayetano. The website of Manuel ‘Mar’ Roxas II features materials from the 2016 elections yet and is not loading properly. Bong Revilla’s website is password-protected while Grace Poe’s is still under construction (as of Feb. 12, 2019).

• A majority of the candidates have provided public contact details that allow interested audiences to use to get in touch with them or their team/staff. 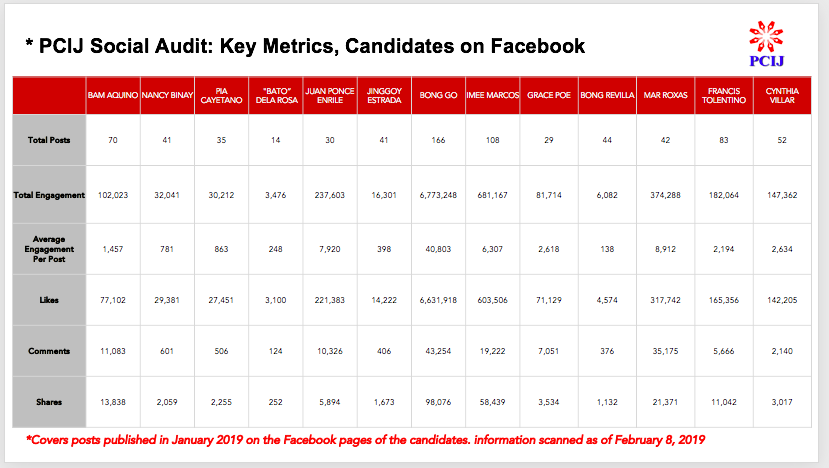 • In January 2019, the frequency of posting on Facebook among the 13 candidates scanned varied from as few as 14 to as many as over 150 posts, with corresponding Post Engagement (Likes, Comments, Shares) ranging from a little over 3,000 to an unusually high 6.7 million in total.

• Quantity does not automatically translate to quality, however. Some candidates have achieved a much higher engagement on fewer posts than others who have published more posts but have drawn relatively less interaction from the audience.

○ Bong Go published over 160 Facebook posts in January 2019, gaining over 6.7 million Likes, Comments, and Shares in total engagement. This number excludes as yet his page’s video views. Dividing 6.7-million engagement by his 160-plus Facebook posts, Go has achieved an average of 40,800 engagements per post.

These contrasting results could be explained in part by certain reasons such as, but not limited to, the following:

• Some candidates have offered content and messaging that possibly encouraged higher affinity and relatability values with the audience; and

• The use of “influencers” and “paid media” support to boost the “reach” and “air time” of the candidates’ Facebook posts and/or pages via the audience’s newsfeed.

Video content appears to gain the most traction compared to other content formats used by the candidates. This is most apparent in the case of some administration candidates (Bong Go and Francis Tolentino). The main engagement drivers on their Facebook pages are content or posts that include or feature President Rodrigo R. Duterte. These particular posts have drawn more engagement on the Facebook pages of Go and Tolentino, in the form of Comments that are a mix of positive and negative sentiments.

While certain social-media pages are perceived to have been created solely for the purpose of the upcoming midterm elections (i.e., Estrada’s “Anak ng Masa”, Revilla’s “Agimat ng Masa”, and Enrile’s additional Twitter and Instagram channels), the other candidates (Bam Aquino, Nancy Binay, Marcos, Poe, and Cynthia Villar) have just shifted or added ‘topics’ to the existing content on their social-media pages. These additional content have given these candidates a subtle push for their campaign for the Senate. 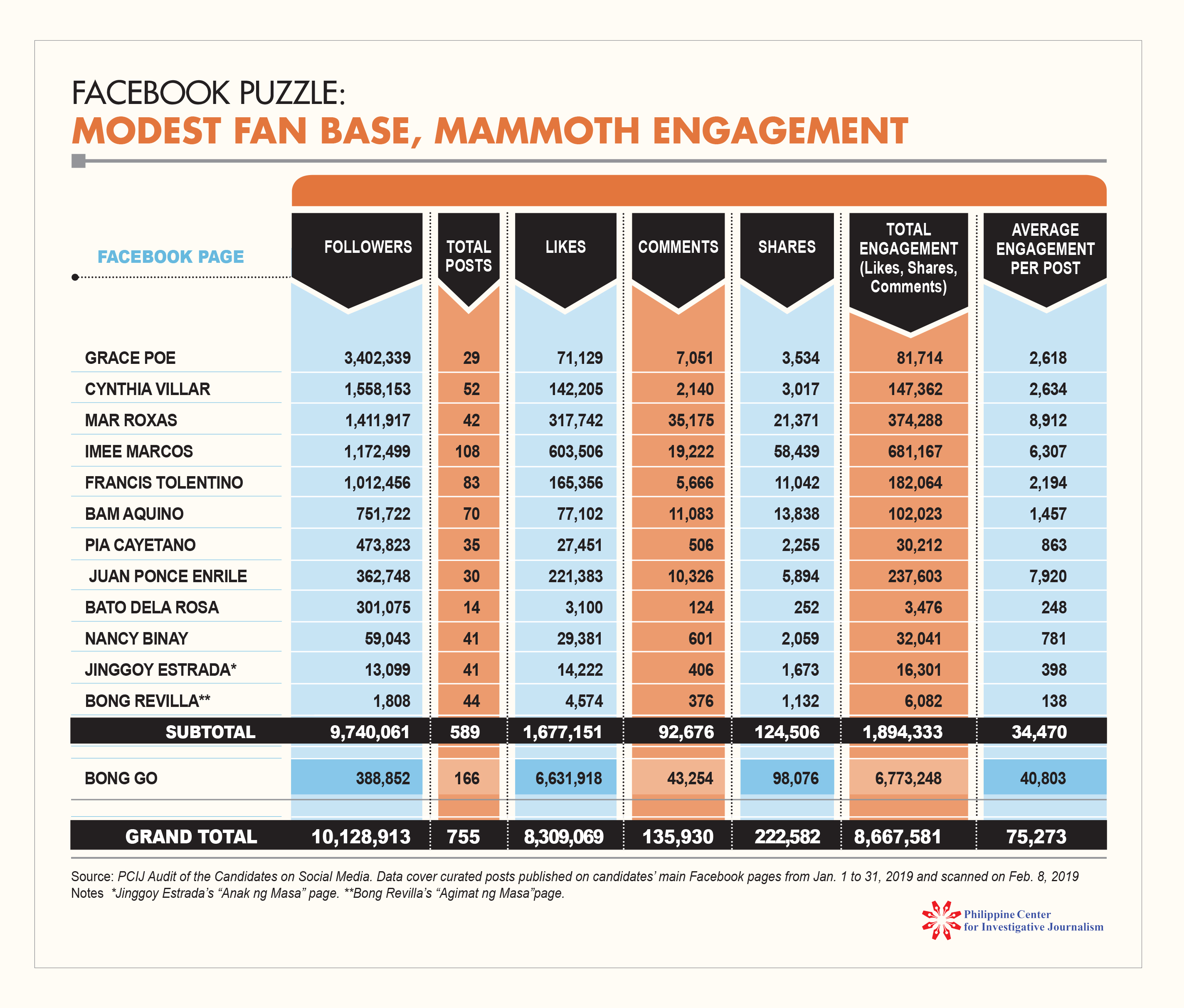 Data on the total engagement and average engagement per post of the 13 candidates, referenced against the number of their fans or followers, are rather puzzling. The data point to possible boosting of the posts of some candidates via clearly aggressive social-media management and marketing strategies.

Those obtained from the Facebook pages of Bong Go and Imee Marcos show them to be outliers, in terms of unusually high numbers of total engagement, compared with the rest of the 13 candidates included in this Facebook content scan.

For instance, by the number of organic followers or fan base reflected on their Facebook pages, as of last Feb. 8, here’s how the candidates rank:

By the number of posts that they published on their Facebook pages from January 1 to 31, 2019, here’s how they rank: 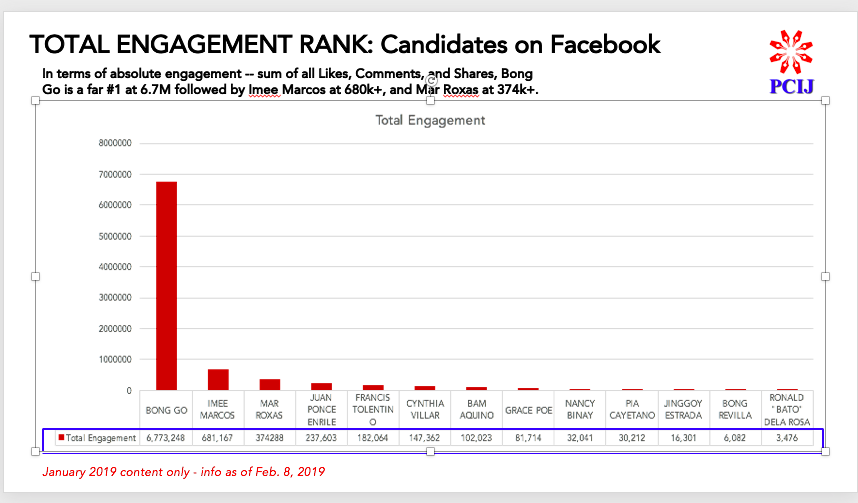 No guarantees
Big fan bases did not automatically deliver big reach and engagement for all the candidates. By the total engagement numbers (sum of Likes, Comments, Shares) they got for the posts they published on their Facebook pages from January 1 to 31, 2019, they ended up in this unusual kind of ranking:

Dividing their total engagement numbers by their total posts for the month of January, here’s how the candidates rank by average engagement per post: 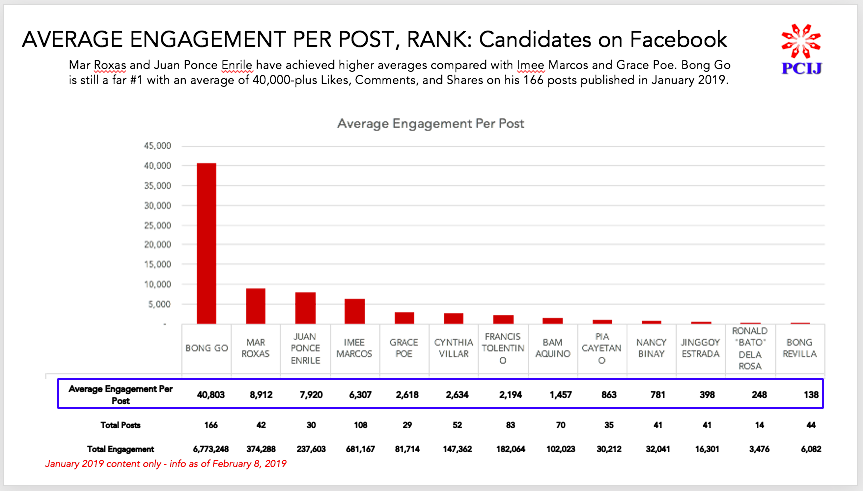 In other words, Bong Go’s total engagement number is thrice more than what the 12 other candidates achieved in January 2019.

Facebook allows page admin managers to boost posts to reach targeted audiences to grow their organic fan base and reach new audiences, based on specified age, location, sex, or interests. Boosting may be done across duration periods of one day, seven days, or 14 days, by Facebook’s default buttons.

Hootsuite, a social-media management system that gives users an integrated user interface from which to manage their social interactions, gives a glimpse of how this is done in the United States.

According to Hootsuite’s guide, “the minimum budget is $1 per day, so hypothetically, you could run a campaign for a week with just $7. Obviously, the more you pay, the more reach you’re going to get.” — With reporting by Malou Mangahas and infographics by Arnel Rival, PCIJ, February 2019

• Engagement: The response a post receives from the audience, including Likes/Reactions, Comments, and Shares or Retweets.

• Total Engagement: The sum of all the Likes/Reactions, Comments, and Shares or Retweets a post receives.

• Reach & Impressions:Metrics that can be seen only by FB Page Admins via FB Insights/Ads Manager). “Reach” pertains to the actual number of people who have seen a post, while “Impression” pertains to the number of times it was seen or served to the people reached, i.e. if a post is seen twice by each of the 10 people reached, then the total impressions of the said post would be 20. 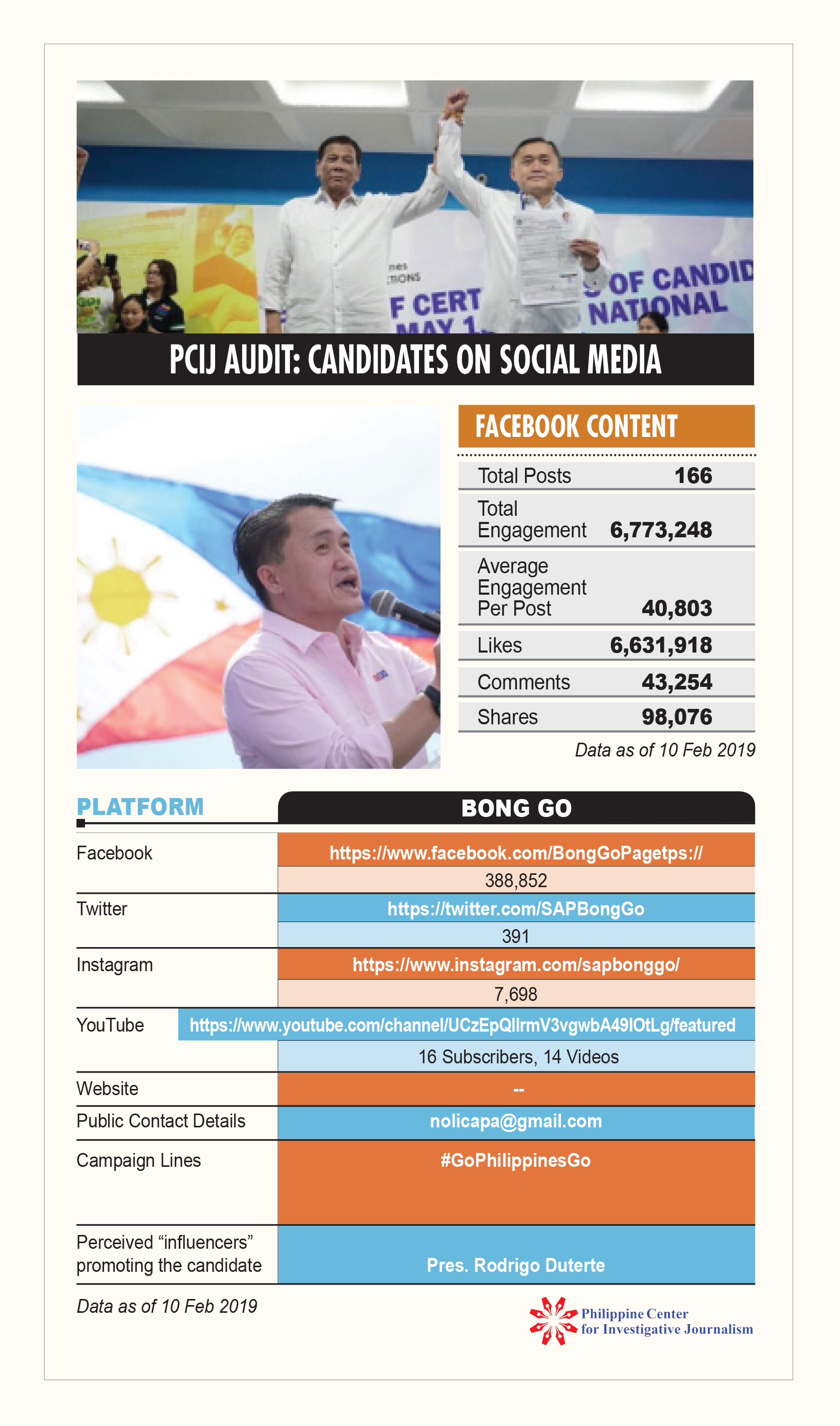 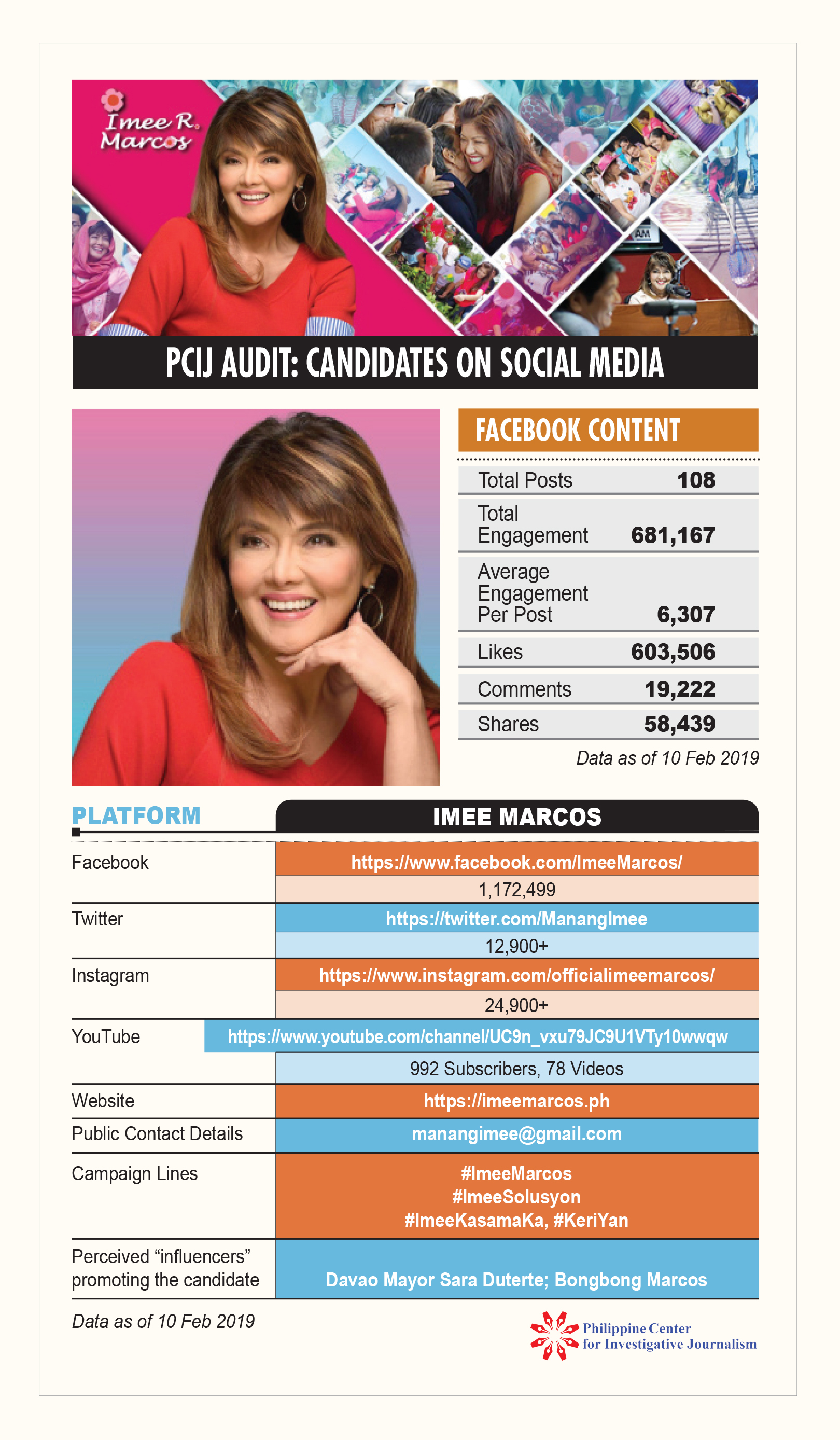 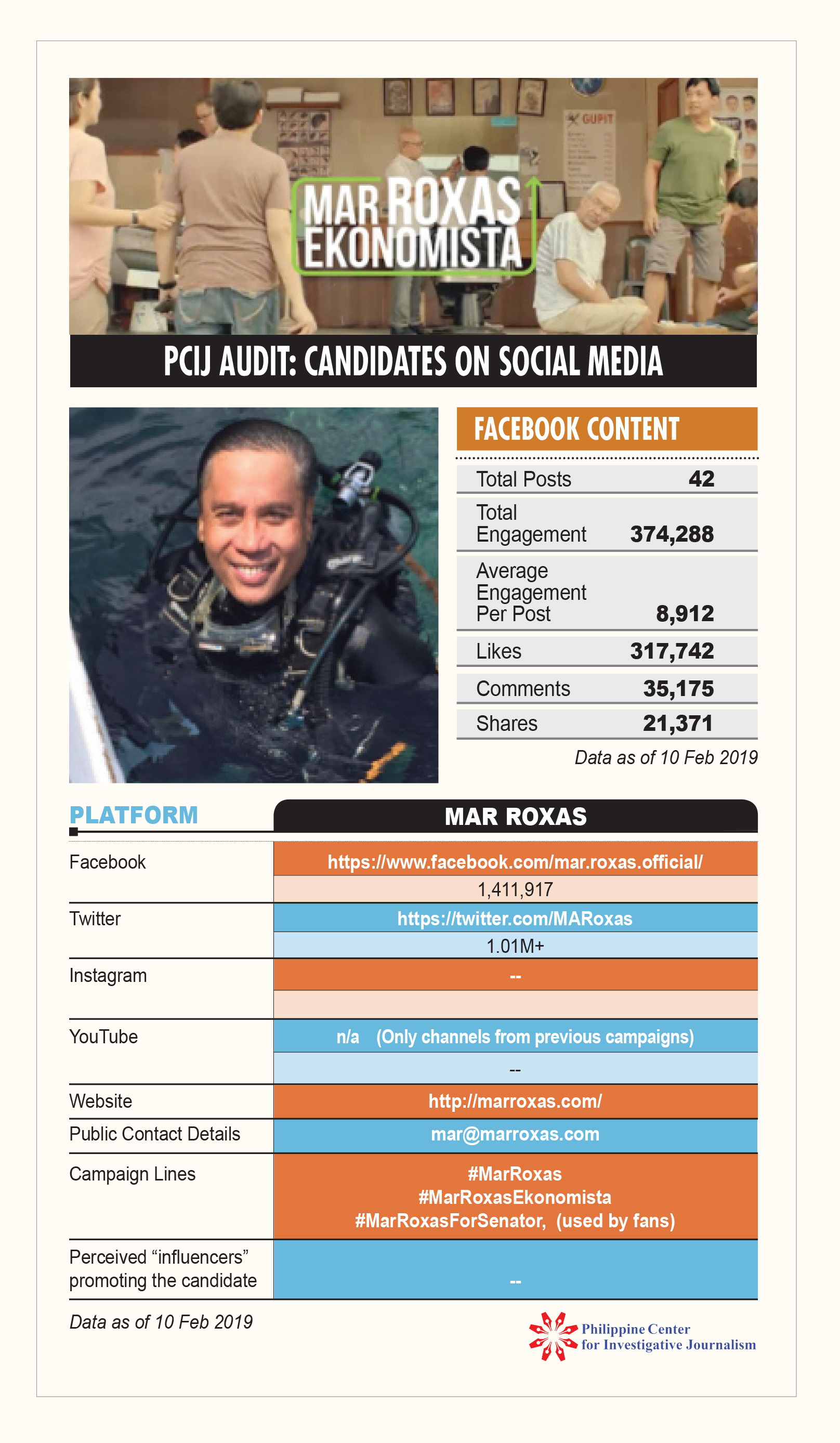 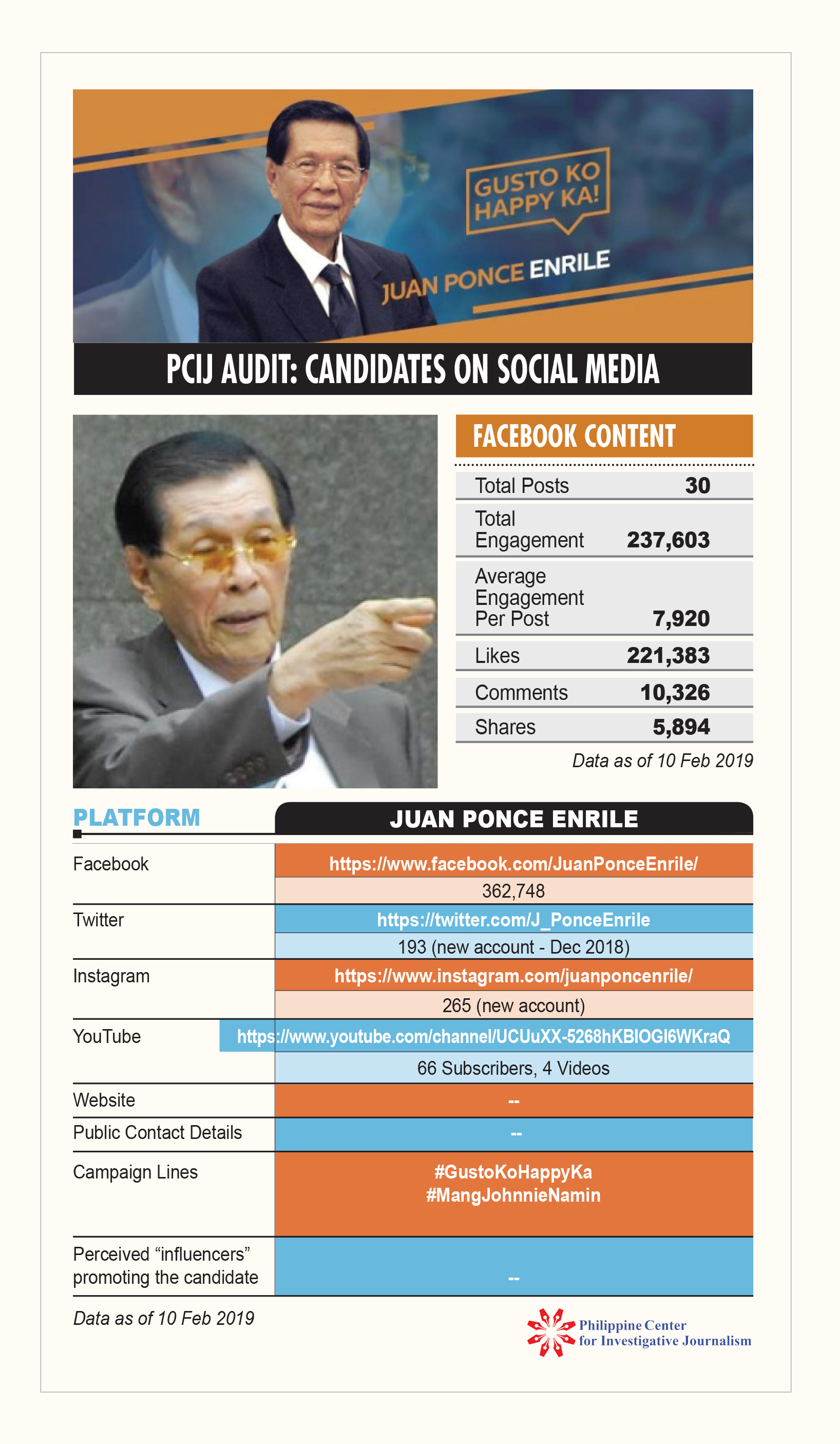 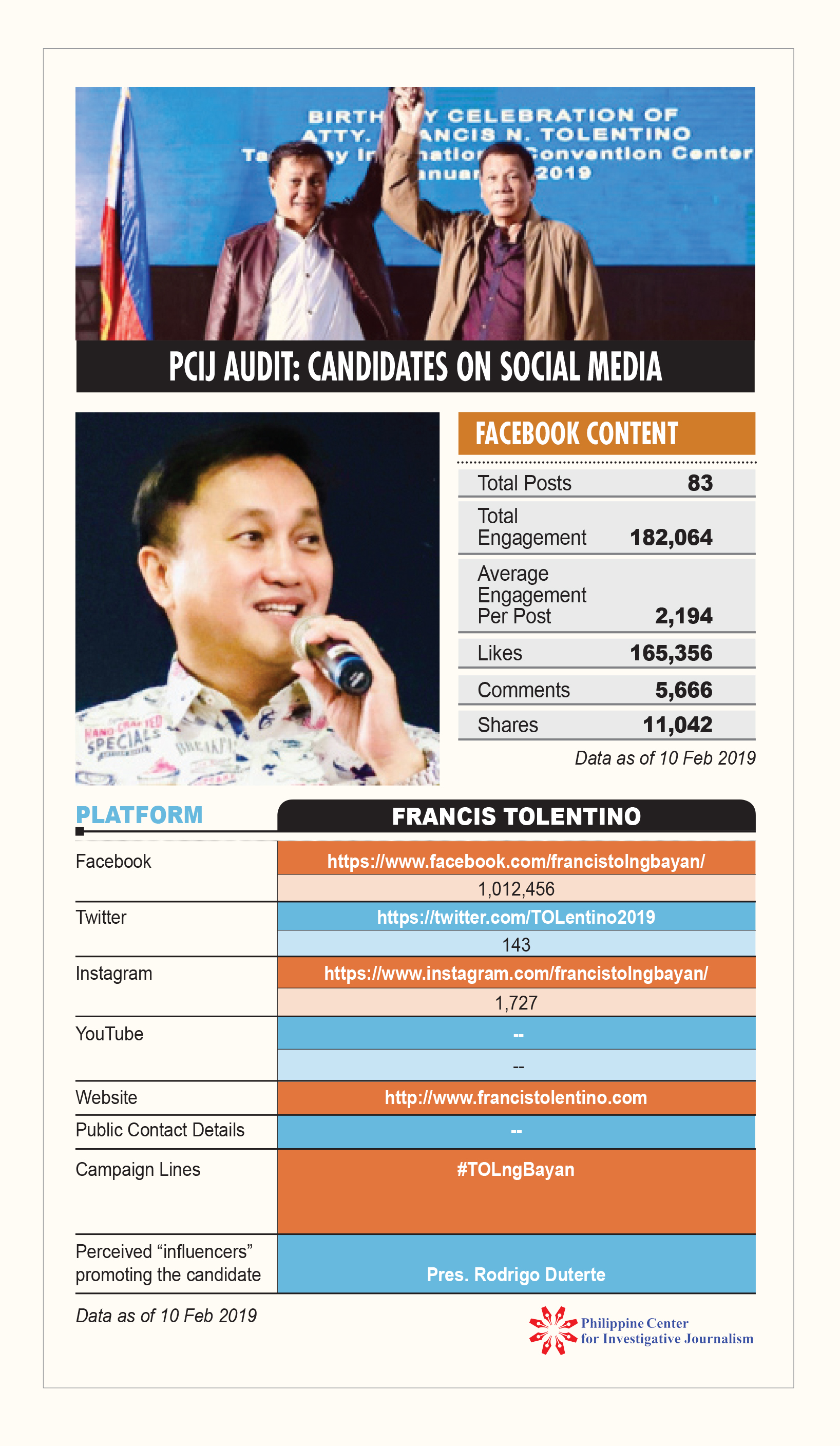 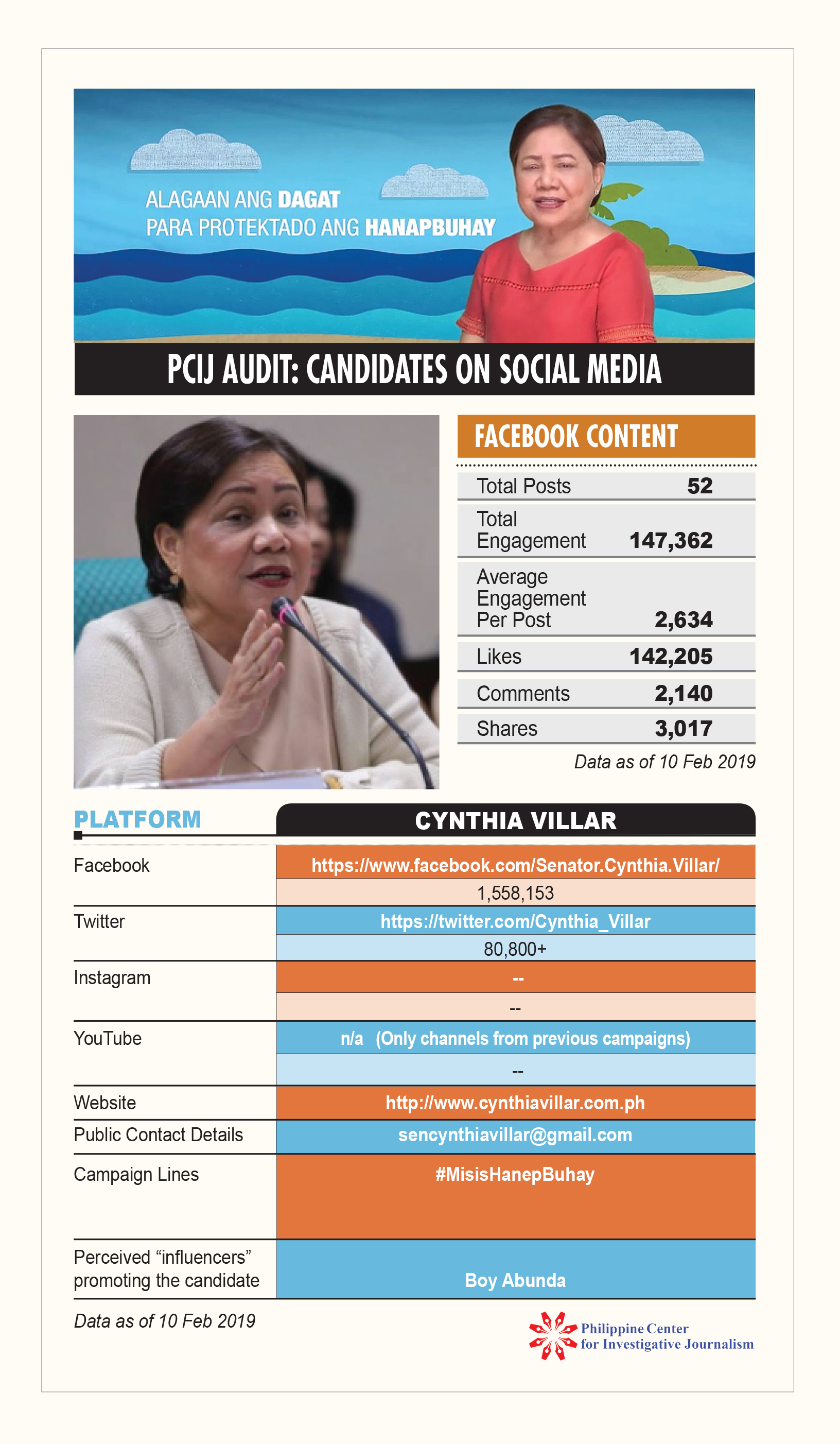 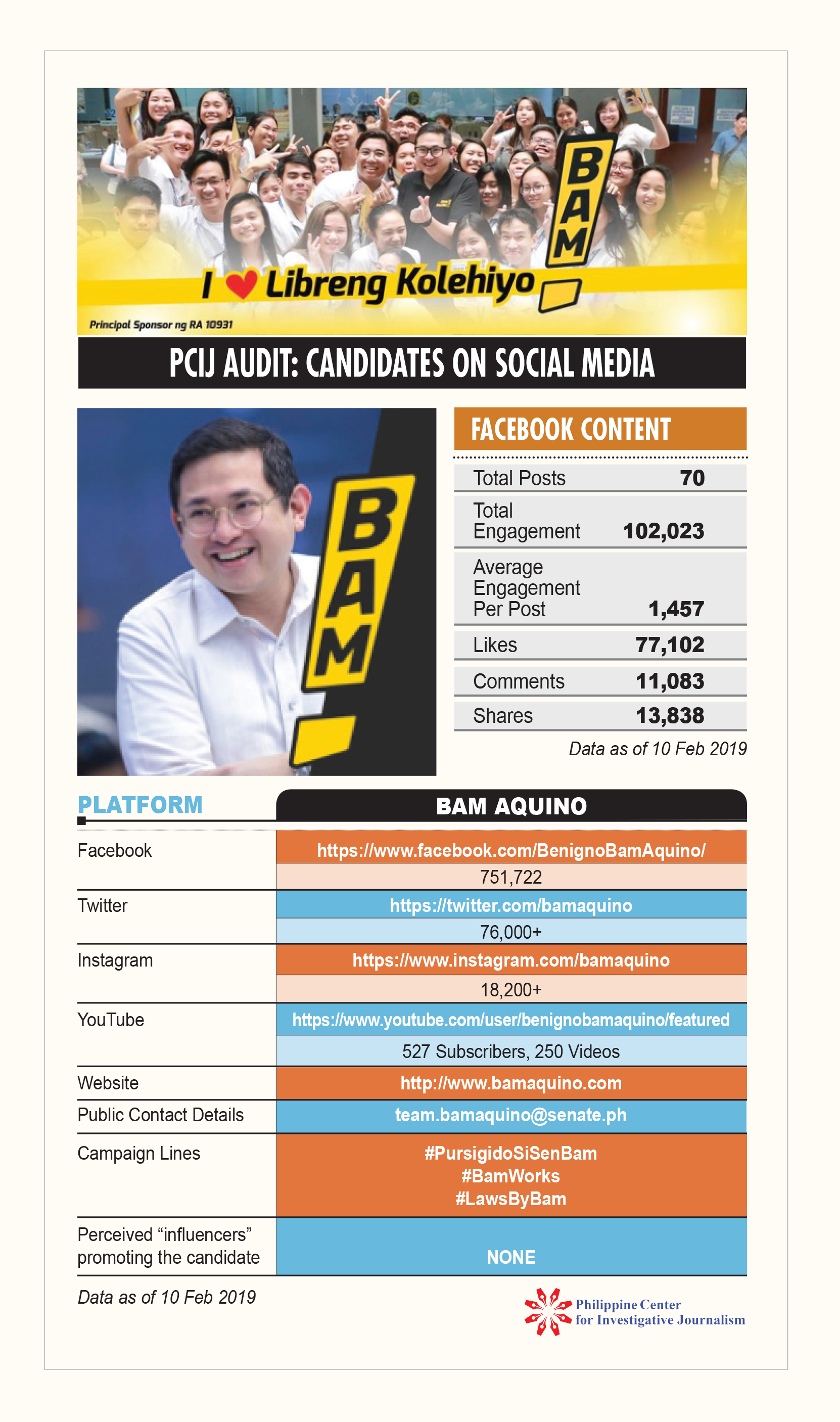 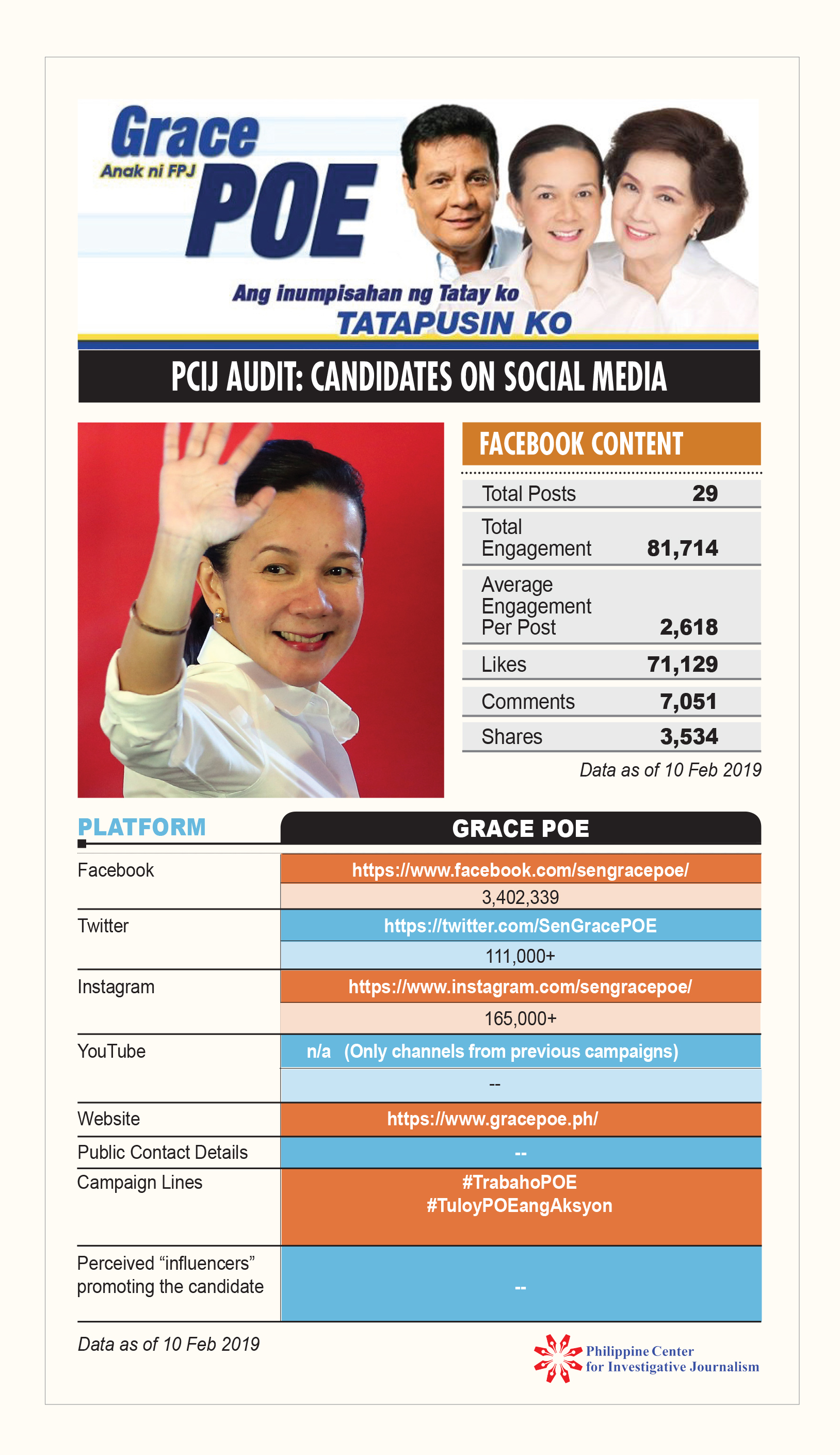 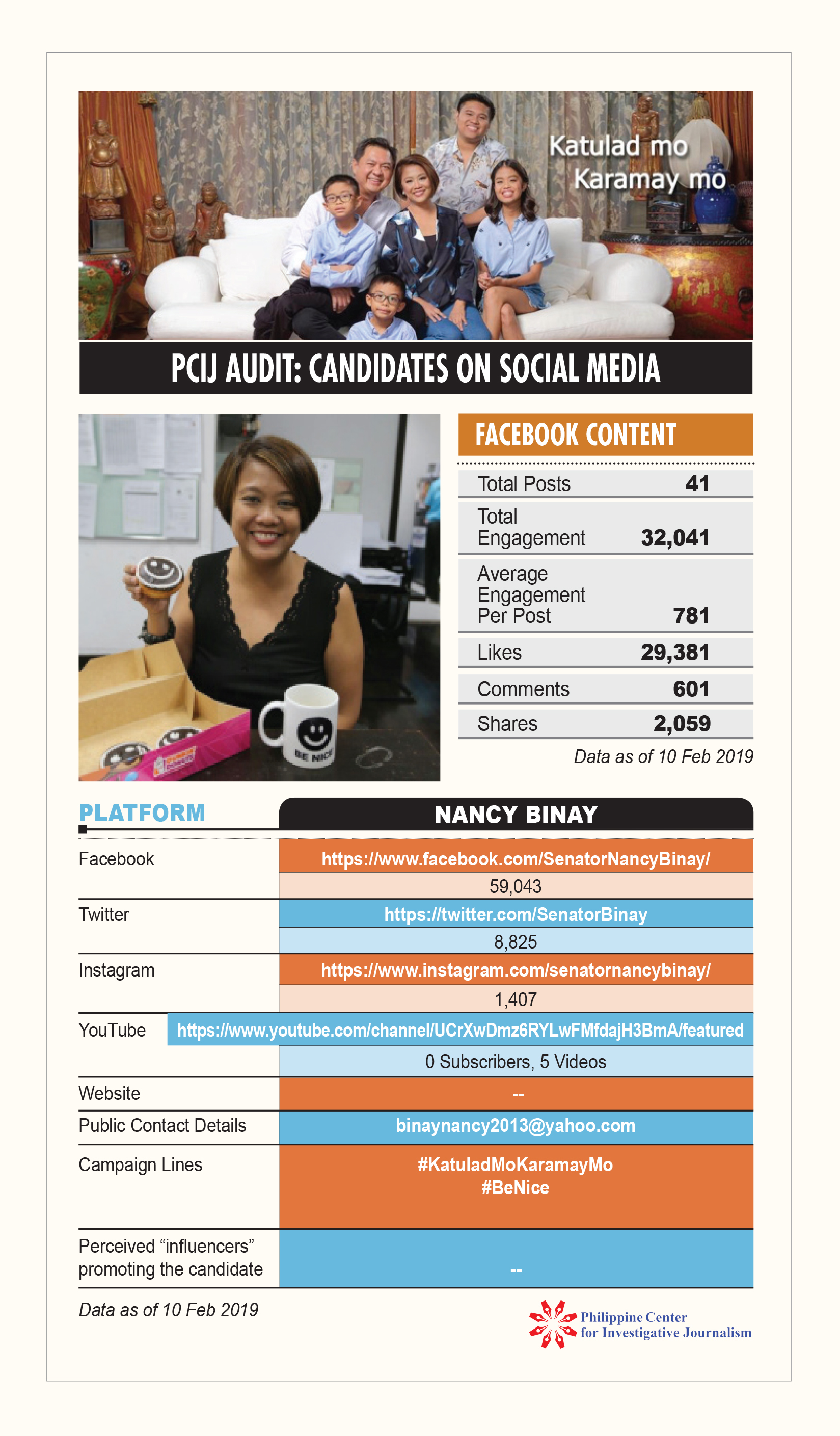 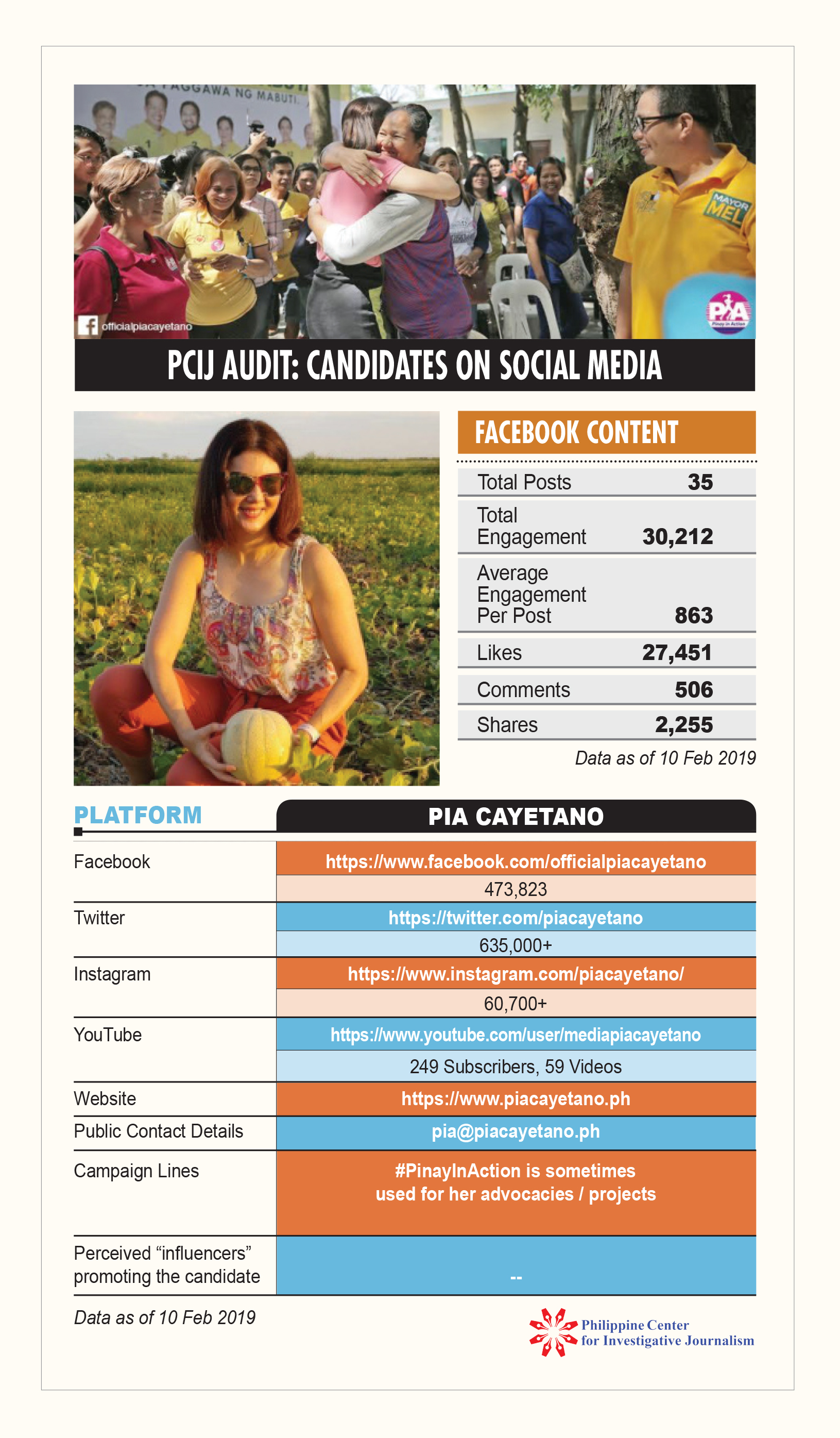 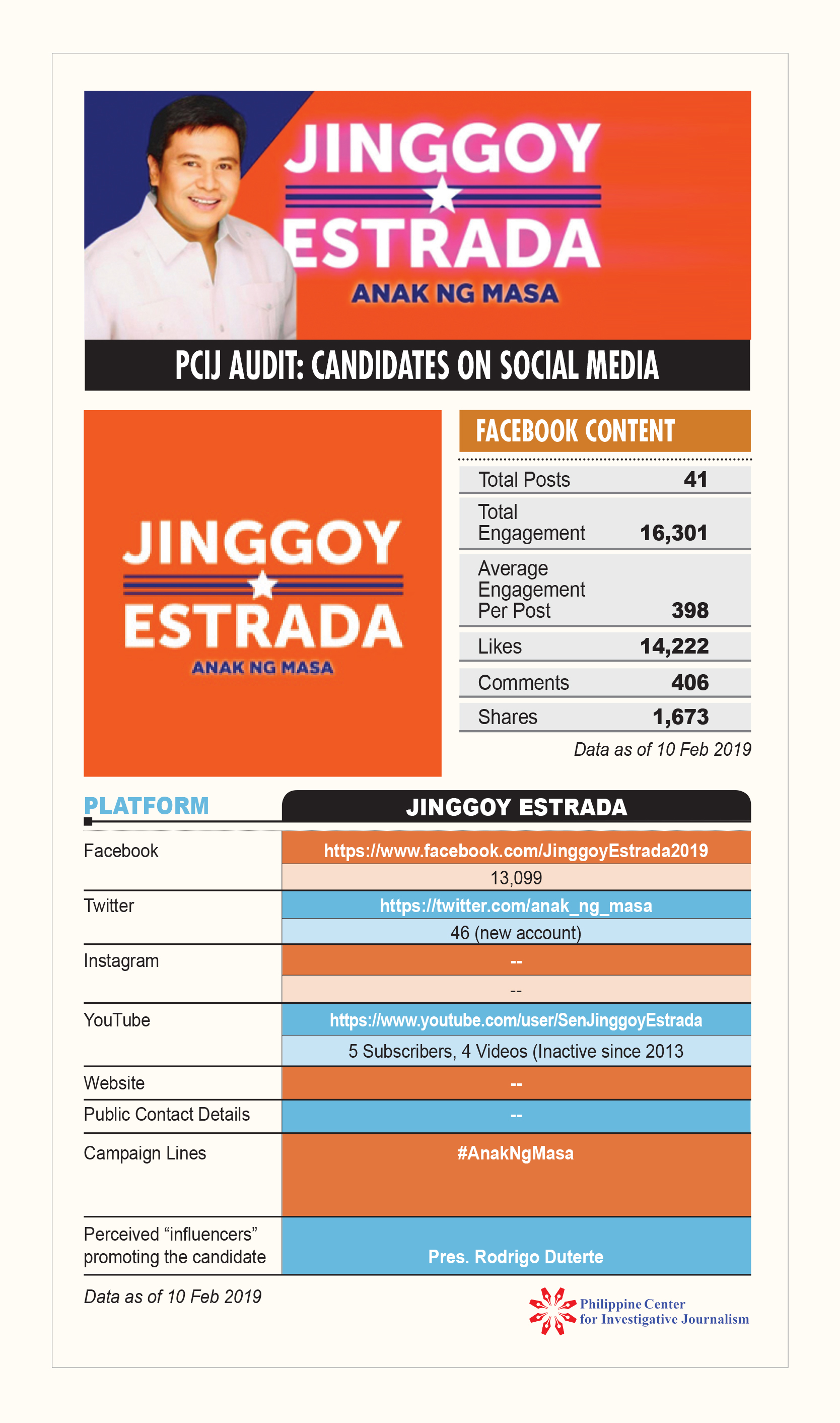 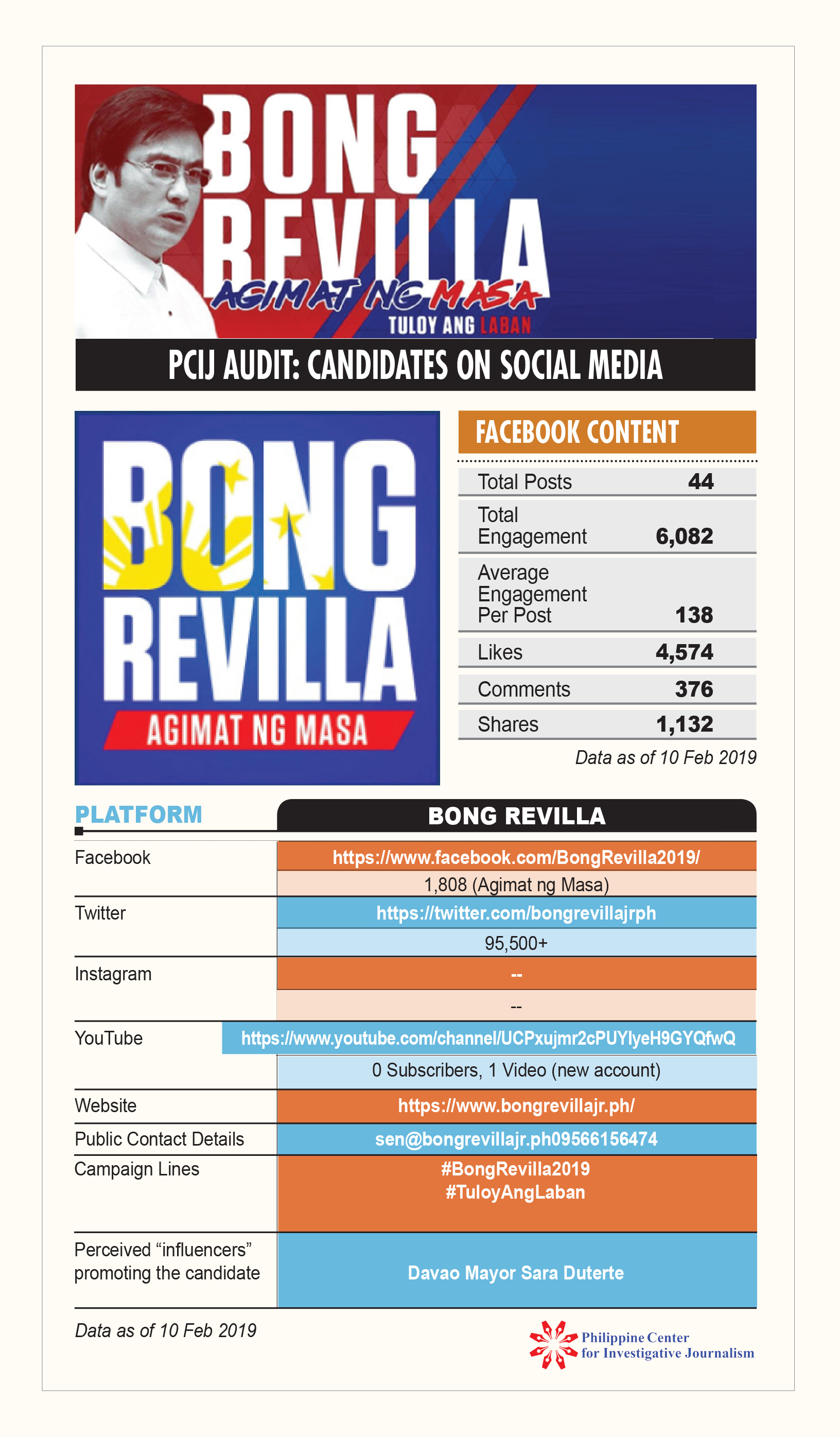 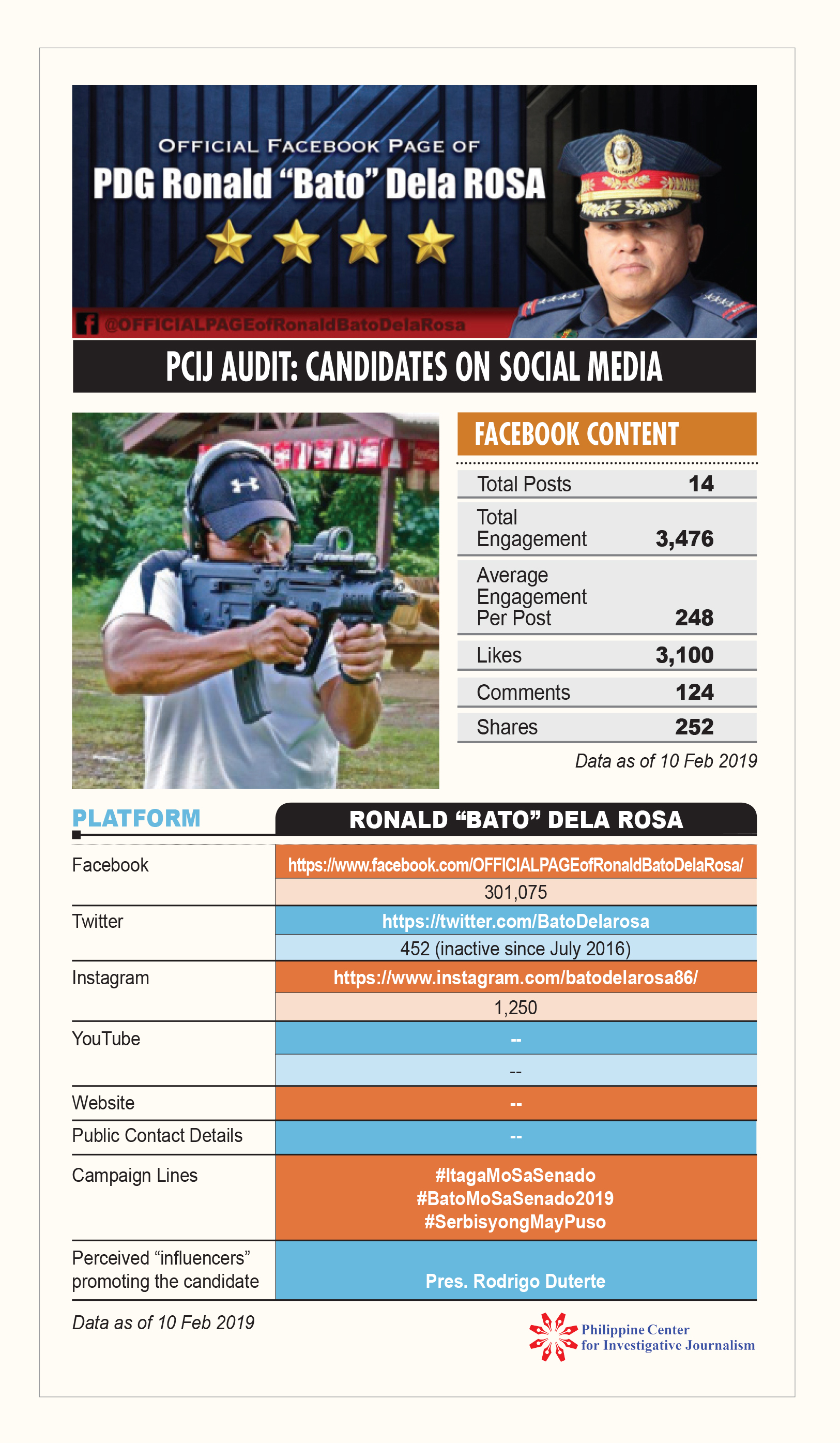