by Malou Mangahas and Karol Ilagan
Monday, May 28th, 2018 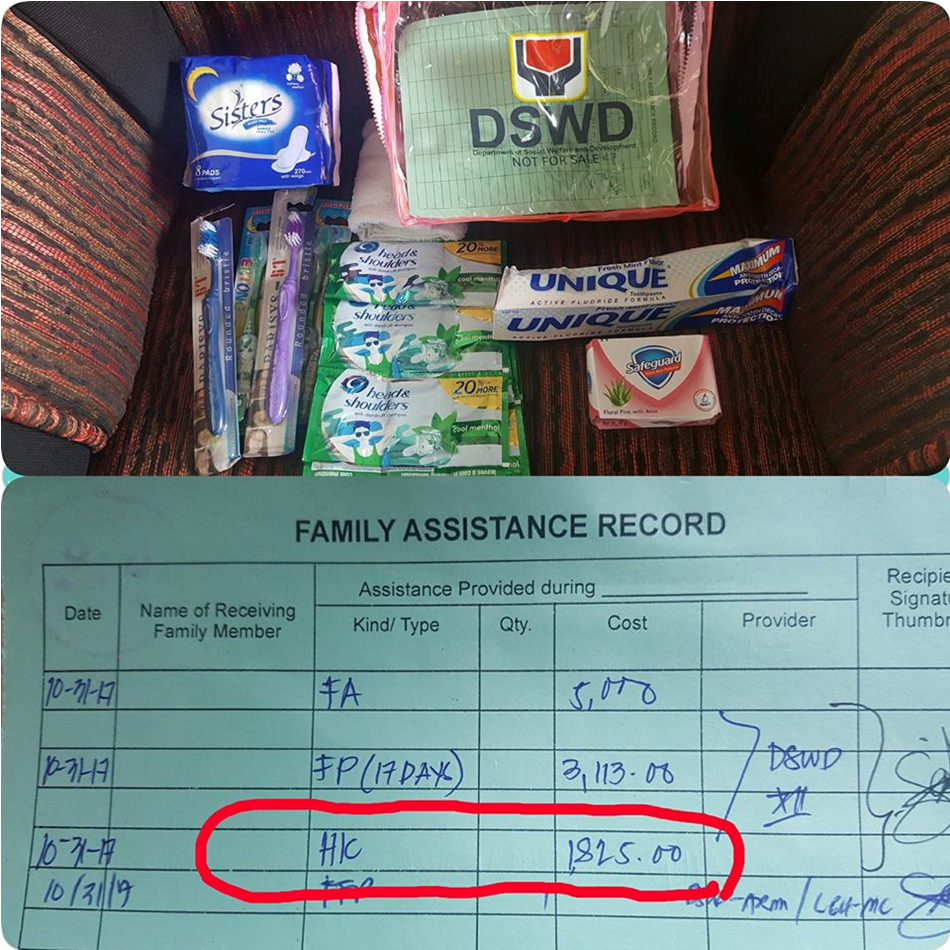 THE top three suppliers of the billion-peso food, hygiene, and various other kits for the displaced residents of the Islamic City of Marawi supposedly offered “the lowest and most responsive bids” but a price check with the Trade department and retail grocery chains show otherwise.

Instead of diving down, the price quotations that these suppliers submitted to the Department of Social Welfare and Development Field Office in Region XII were even higher than prevailing retail prices then and now.

The DSWD-FO R XII accepted, apparently without diligent review, the suppliers’ quotations for the bulk purchases in 13 supply contracts altogether worth P1.01 billion, and all as “negotiated procurement-emergency cases” contracts.

A price check with three grocery chains, and the suggested retail price(SRP) advisories of the Department of Trade and Industry (DTI) show that the top three suppliers — Tacurong Fitmart, Ororama Superstore, and Ace Centerpoint — had priced the products they sold in bulk to DSWD at significantly higher rates than prevailing retail prices.

In a few instances, though, the Purchase Orders or POs covering the contracts between DSWD and the suppliers showed much lower prices for items with volume or size specified in the documents but not available in retail stores, or apparently non-existent at all.

PCIJ’s administration and finance staff checked the prices listed in the purchase orders covering the contracts between DSWD-FO RXII and the suppliers with three grocery chains’ branches in Quezon City — Puregold, SaveMore, Robinsons Superstore — and the UP TownCenter Merkado.

Additionally, PCIJ checked the PO’s enrolled prices with the “Suggested Retail Price” or SRP advisories DTI had issued from April 2017 to January 2018 that invariably bear these notes: “SRPs apply nationwide, unless specified SRPs apply to both supermarkets and wet markets, unless specified. Consumers are advised to carefully check the weight and the price tag of products before purchase.”

Prices on high side

PCIJ’s price check show that instead of lowering the prices of products that they were selling in bulk to DSWD-FO XII, the three suppliers jacked these up by significant amounts. These include:

The overpricing may not seem much per unit of product but multiplied by the tens of thousands that DSWD-FO XII purchased, the amount translates to hundreds of millions of pesos. 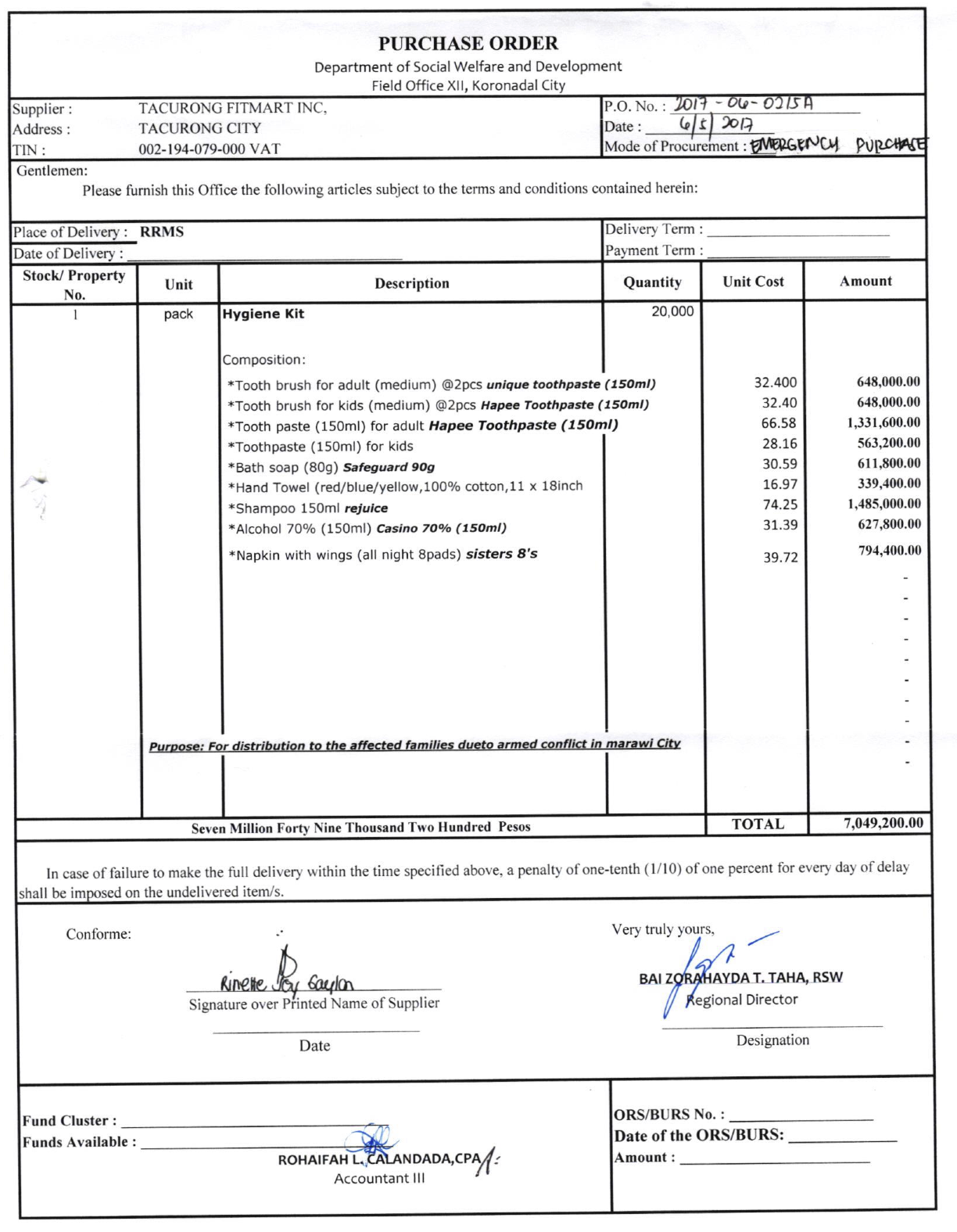 Both contracts were won by Tacurong Fitmart, the top supplier since 2015 of DSWD-FO RXII. From June to November 2017, Tacurong Fitmart, which is based in Sultan Kudarat, about 252 kilometers or over six hours away by car from Marawi City, secured from DSWD-FO XII seven supply contracts worth a total of P806.8 million.

During the same period, Ororama Superstore, a mall and store chain with head office in Cagayan de Oro City — 102.9 kilometers or two and a half hours away by car from Marawi City — got three supply contracts from DSWD-FO XII worth a total of P158.8 million.

Ace Centerpoint is a mall based in Koronadal City, South Cotabato that is 283.2-kilometers or nearly seven hours away from Marawi City. It got three contracts from DSWD-FO XII worth a total of P128.9 million.

Two contracts won by Ororama covered the bulk purchase of hygiene kits worth P1,800 each but with no specified unit cost per content. PCIJ’s price check show that in both instances, the kits could have cost only P357.75 to P657.25, suggesting a possible overprice of as much as 300 to 500 percent of retail prices. 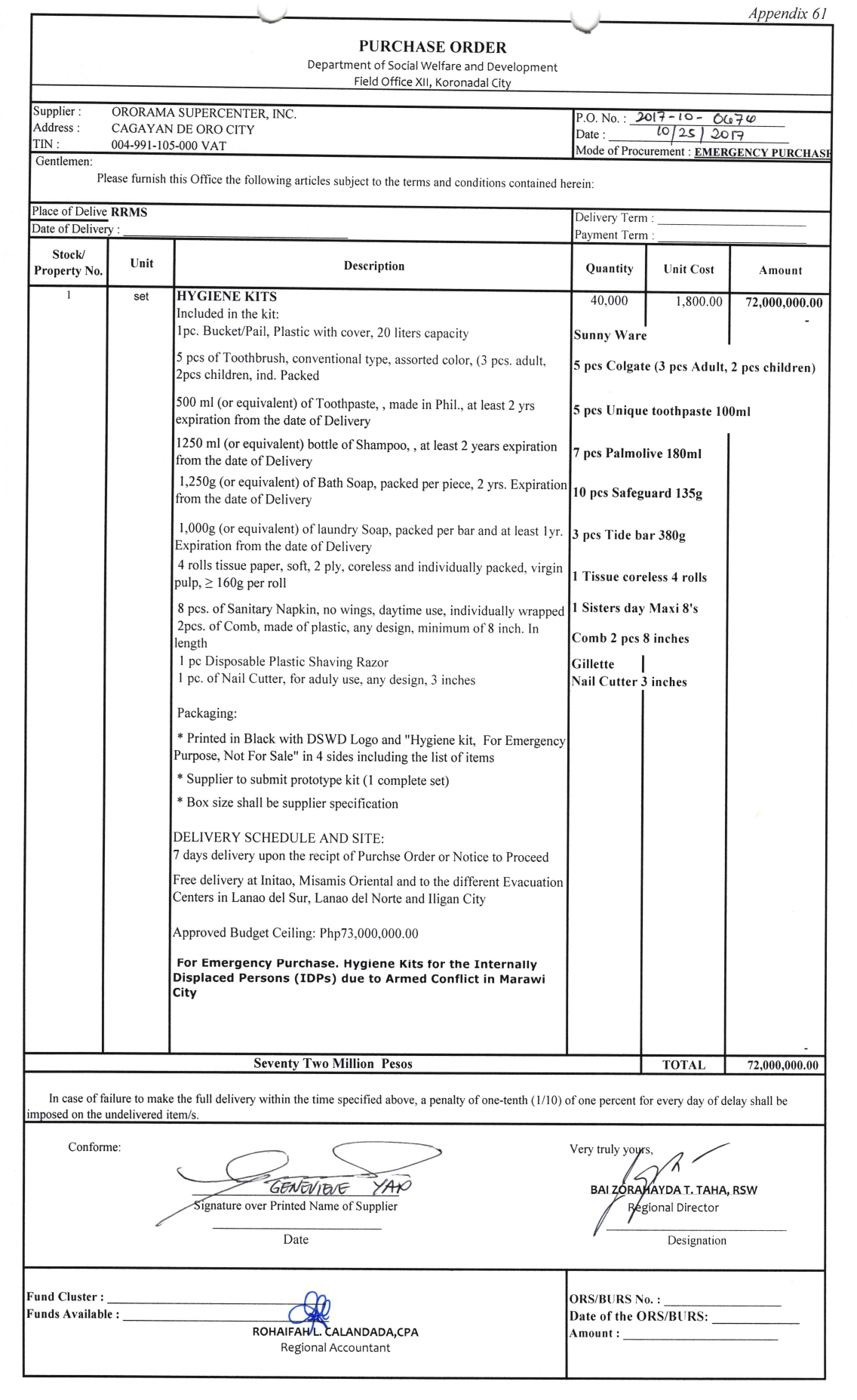 A detailed price check of the kit’s components, per unit, with the retail prices of the grocery chains and DTI’s SRP advisories show that the kit could be worth only P677.25 — for a possible overprice of P1,142.75 per kit. If certain items were multiplied by the quantity set in the PO, the total cost per hygiene kit would add up to at most P1,699, for an apparent overprice of P101 at least per kit. 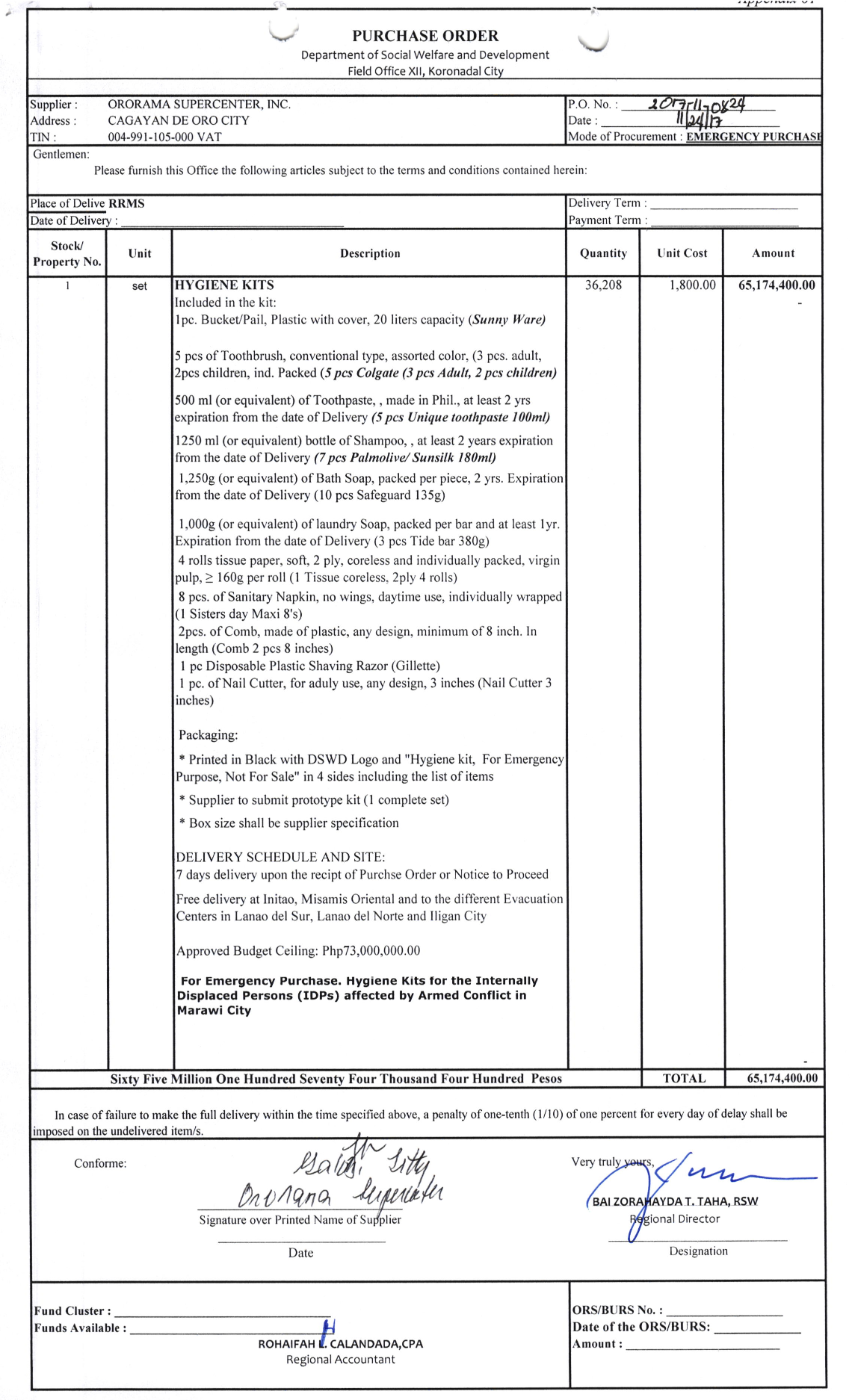 PCIJ’s detailed price check of the kit’s components, per unit, amounted to at most P375.50, for a possible overprice of P1,442.25. If some of the items were multiplied by the quantity set in the PO, the cost per hygiene kit would come up to P1,007.25, for an apparent overprice of about P602 per kit.

To be sure, complaints of allegedly overpriced assistance packs to the displaced residents had surfaced early on.

On Nov. 9, 2017, the displaced families’ complaints about the supposedly overpriced hygiene kits were reported on social media sites and local media. Some residents had been quoted as saying that the kits, reportedly costing P1,825, could not be worth more than P500. The amount of P1,825 was what appeared in the “Family Assistance Record” of the residents who received the kits.

RanaoStar.com in a blog entry on Nov. 4, 2017 said that the evacuees had been asked to sign on their receipts of hygiene kits supposedly worth over P1,800, “but they said the actual contents of the kit is estimated to be more than P200 only.” The blogsite also posted a photo showing the contents of one kit, and the accompanying Family Record.

Taha was apparently referring to Ororama’s supply of 40,000 units of hygiene kits, via a contract worth P72 million. The Purchase Order dated Oct. 25, 2017 for the contract stipulated that the complete delivery should be within seven days or on Nov. 1, 2017. The kits were distributed starting Oct. 31, 2017, or a day earlier, and continued on in the next week. 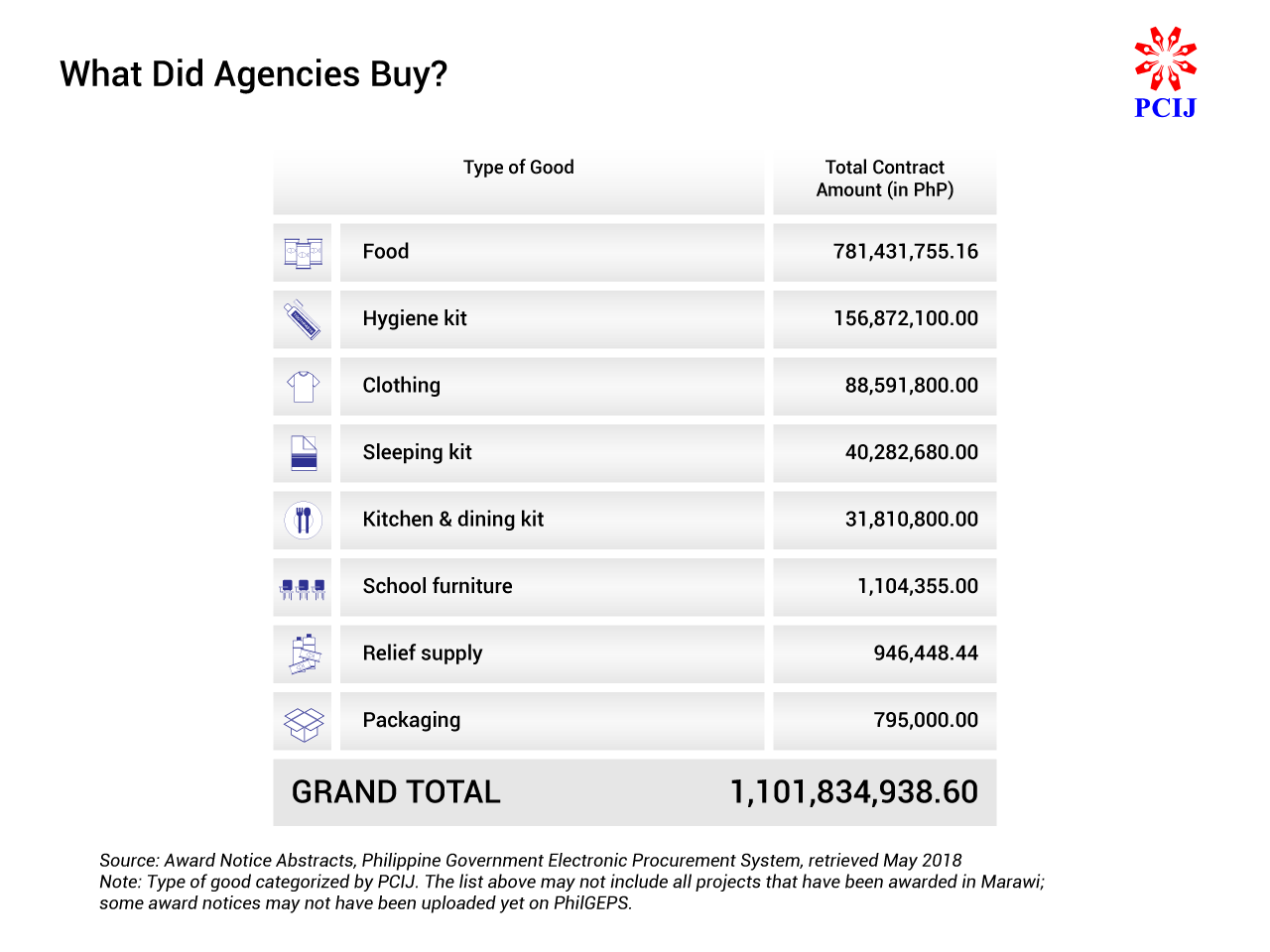 Aside from the multimillion-peso contracts snagged by just three suppliers for the government’s Marawi relief efforts, a few more companies were able to land contracts, albeit decidedly more modest one.

The DSWD-FO XII was also not the only one bidding out these contracts, but was joined by several other state agencies in doing so. The resulting expenditures for the government’s relief efforts in Marawi thus include:

* P2.5 million for the supply and delivery of various food items “for Marawi continuing relief assistance,” awarded by DSWD-CARAGA (Region XIII) through public bidding to Anjene Industries Inc. in December 2017. Based in Meycauayan, Bulacan, Anjene is represented by Lilia Frias Laure, its chief finance office, in its bid papers.

* P1.1 million for school furniture for transferee students affected by the Marawi conflict, awarded by the Department of Education-Iligan City through public bidding to Ang Panday Producers Cooperative in August 2017.Based in Iligan City, Ang Panday Producers Cooperative is headed by Sixto Dumalag as chairman. It has been registered with the Philippine Government Electronic Procurement System or PhilGEPS since April 2010.

* P999,824.00 worth of grocery items for relief operations in Marawi, awarded by the headquarters of the Coast Guard Civil Service Command through negotiated procurement for small-value items to Veutinnel General Merchandise in November 2017. Veutinnel is based in Manila and is owned by Mare Christine Villanueva Santok.

* P946,448.44 for supply items for relief operations in Marawi, awarded by the headquarters of the Coast Guard Civil Service Command through negotiated procurement for small-value items to Franklin’s Trading & General Services in November 2017. Based in Cavite City, Franklin’s Trading & General Services is a sole proprietorship owned by Jocelyn Robredillo. It has been registered with PhilGEPS since May 2009.

Section 52 of R.A. No. 9184 allows negotiated procurement for small-value items when the amount involved does not exceed the threshold prescribed in the law’s implementing rules and regulations. For national government agencies, government-owned and –controlled corporations, government financial institutions, state universities and colleges, and Autonomous Regional Government, the amount of the item to be procured must not exceed P1 million. 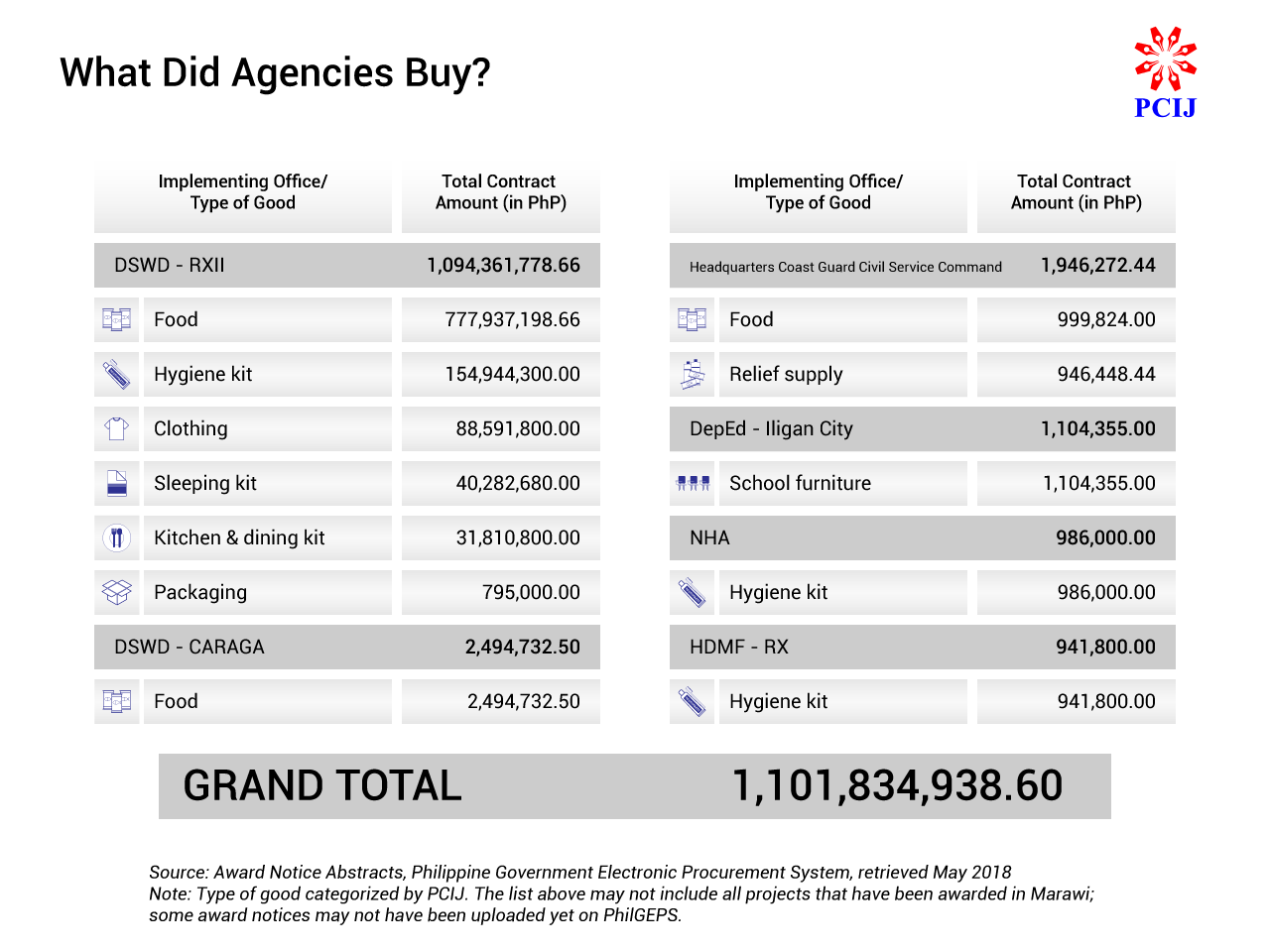 Apart from all these, additional assistance worth some P2.1 billion was also provided for the affected families, according to DSWD’s Disaster Response Assistance and Management Bureau report as of March 2018.

DSWD Central Office, for instance, has provided P432.2 million worth of food and non-food items to its field offices in Region X, Region XII, and the Autonomous Region in Muslim Mindanao (ARMM), of which Marawi City is a part. These include items that have not been identified in the award notices obtained by PCIJ from PhilGEPS, such as high-energy biscuits, “dignity kit,” infant dry cereal, used hard and stuffed toys, and interestingly, Wacoal bras. A total of 3,490 Wacoal bras were provided to Region X. With a total cost of P698,000, each bra cost P200.

Firms of clans among winners of Marawi road, housing deals