The State of Philippine Media

Relentless Attacks and Threats
Online, On Ground, Across the Nation

THE NATION marks today, November 23, the ninth anniversary of the Ampatuan Massacre — the deadliest single-day election-related violence and attack on press freedom in Philippine history. The massacre claimed 58 lives, including that of 32 journalists and media workers.

Nine years hence, the trial of the Ampatuan clan of Maguindanao and their 180 co-accused is not done, and justice remains elusive to the widows and orphans of the Ampatuan Massacre.

Nine years hence, the attacks and threats on the Philippine media continue to rise, online, on ground, across the nation. 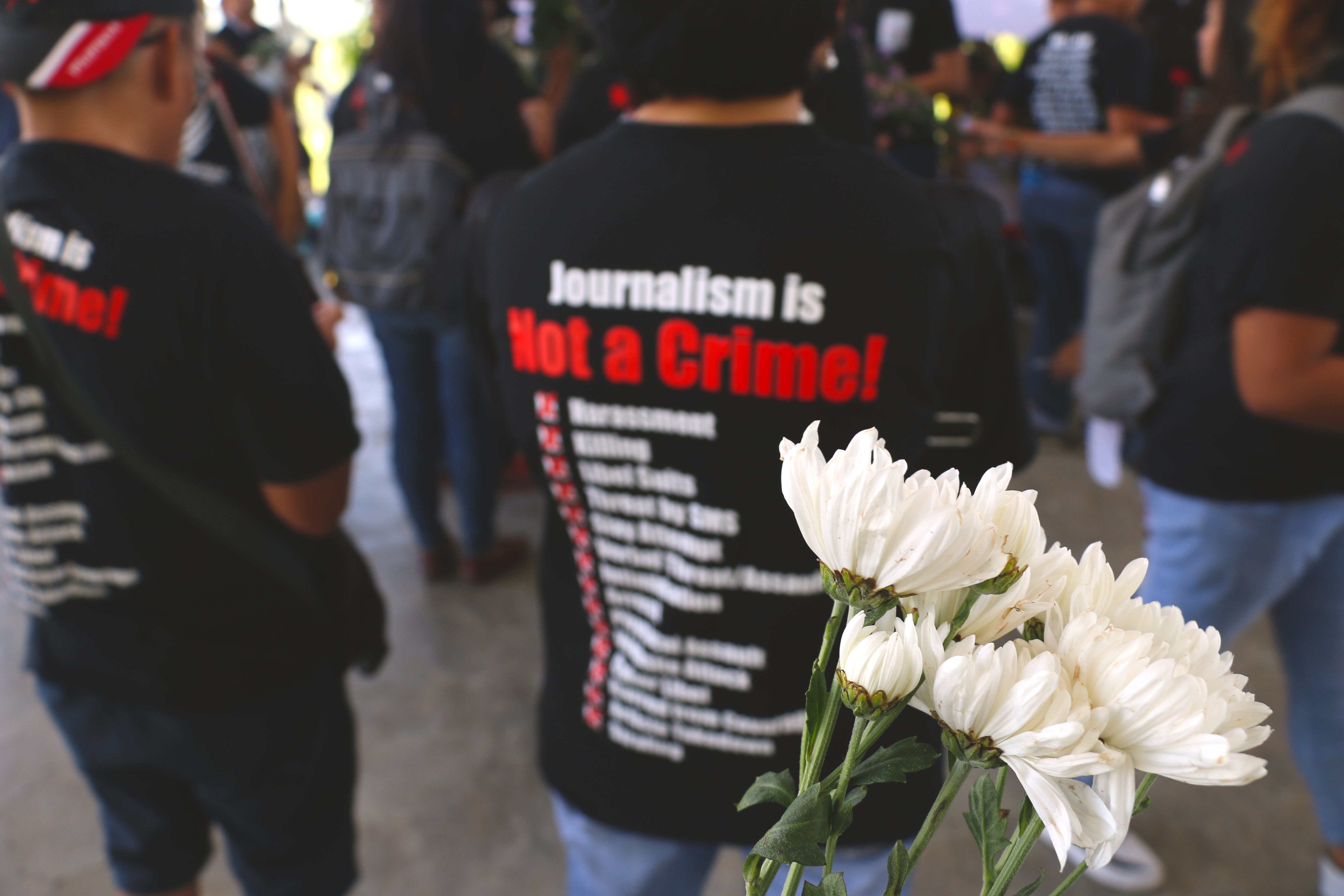 In the 28 months of the Duterte presidency, or from July 1, 2016 to Oct. 31, 2018, we have documented at least 99 such cases of direct and indirect assaults against journalists and news media agencies.

Separately and together, these continue to put at risk and serious peril the practice of independent journalism in what had hitherto been hailed to be one of Asia’s freest and most rambunctious press.

This latest figure, 99 in all, is bigger than the 85 cases that we have documented until April 30, 2018, or in the first 22 months of Duterte. But in the succeeding six months, more of the more dreadful cases had occurred.

Just as worrisome, the count of other cases of attacks on media freedom had also marked increases.

* Online harassment cases had risen from 14 to 17;
* Slay attempts, from 6 to 7 cases;
* Verbal assault or threat (mostly from public officials), from one to five cases;
* Arrests, from zero to three cases; and
* One more case of intimidation (from 5 to 6) and one more case of physical assault (from 4 to 5), had also been recorded in the last six months.

An aggregate 11 cases of threat by SMS or text messaging, and five cases of verbal threat have also happened in the 28 months of Duterte.

One more cyber libel case had been filed, bringing the new total to four, from three last May.

However, the 16 libel cases recorded as of last May have thinned to 12 by end-October 2018, on account of the dismissal or resolution of four cases. 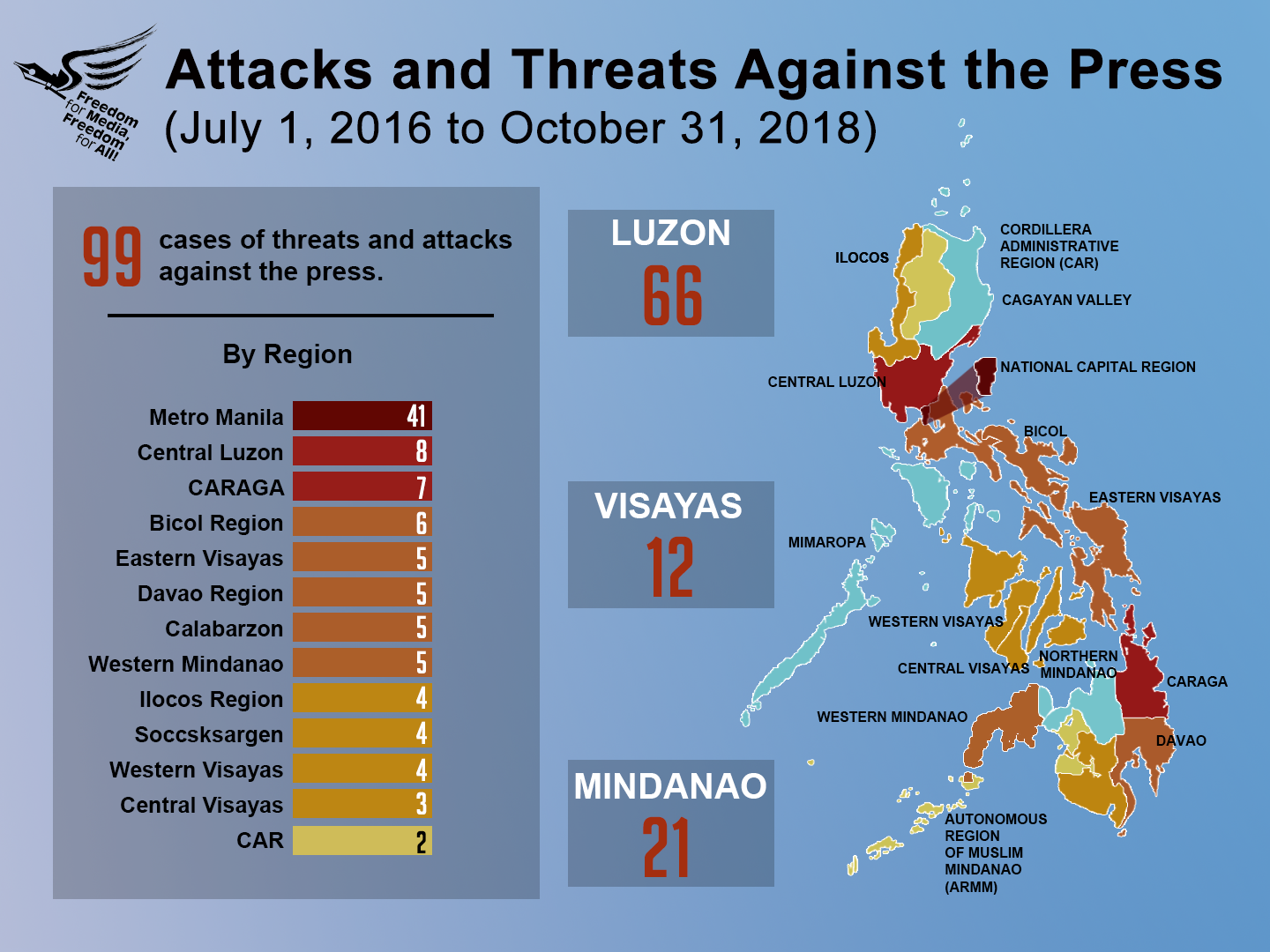 In sum, the 99 cases of attacks and threats in the 28 months of the Duterte presidency consist of: 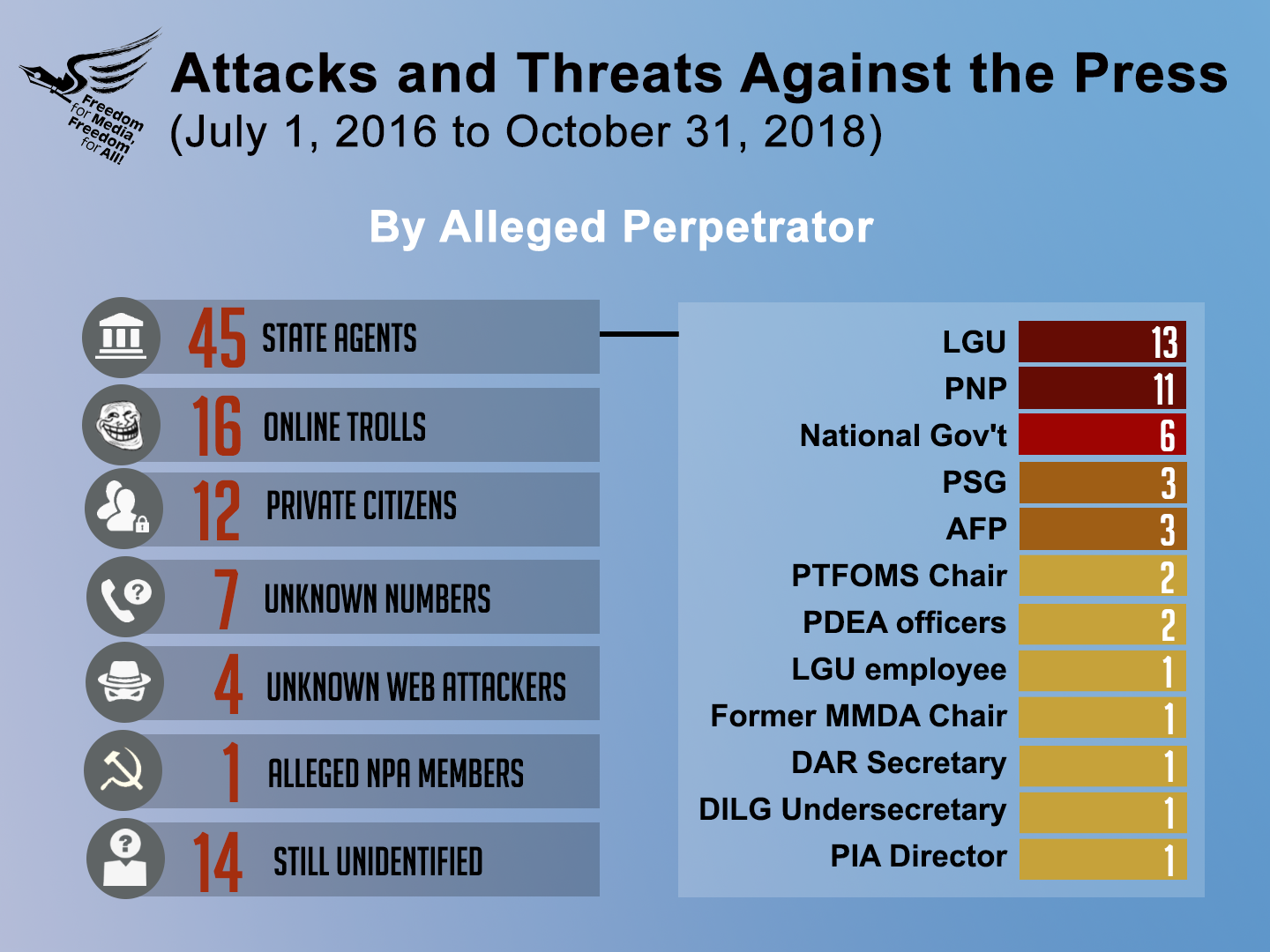 By alleged perpetrator or suspect, it is most significant that nearly half or 44 of the cases involved state agents or public officials.

Apart from the state agents/agencies, the other alleged perpetrators or suspects behind the attacks and threats follow:

By islands of the country, 66 cases were recorded in Luzon, 12 in the Visayas, and 21 in Mindanao.

By regions of the country, the spread of the cases follows: 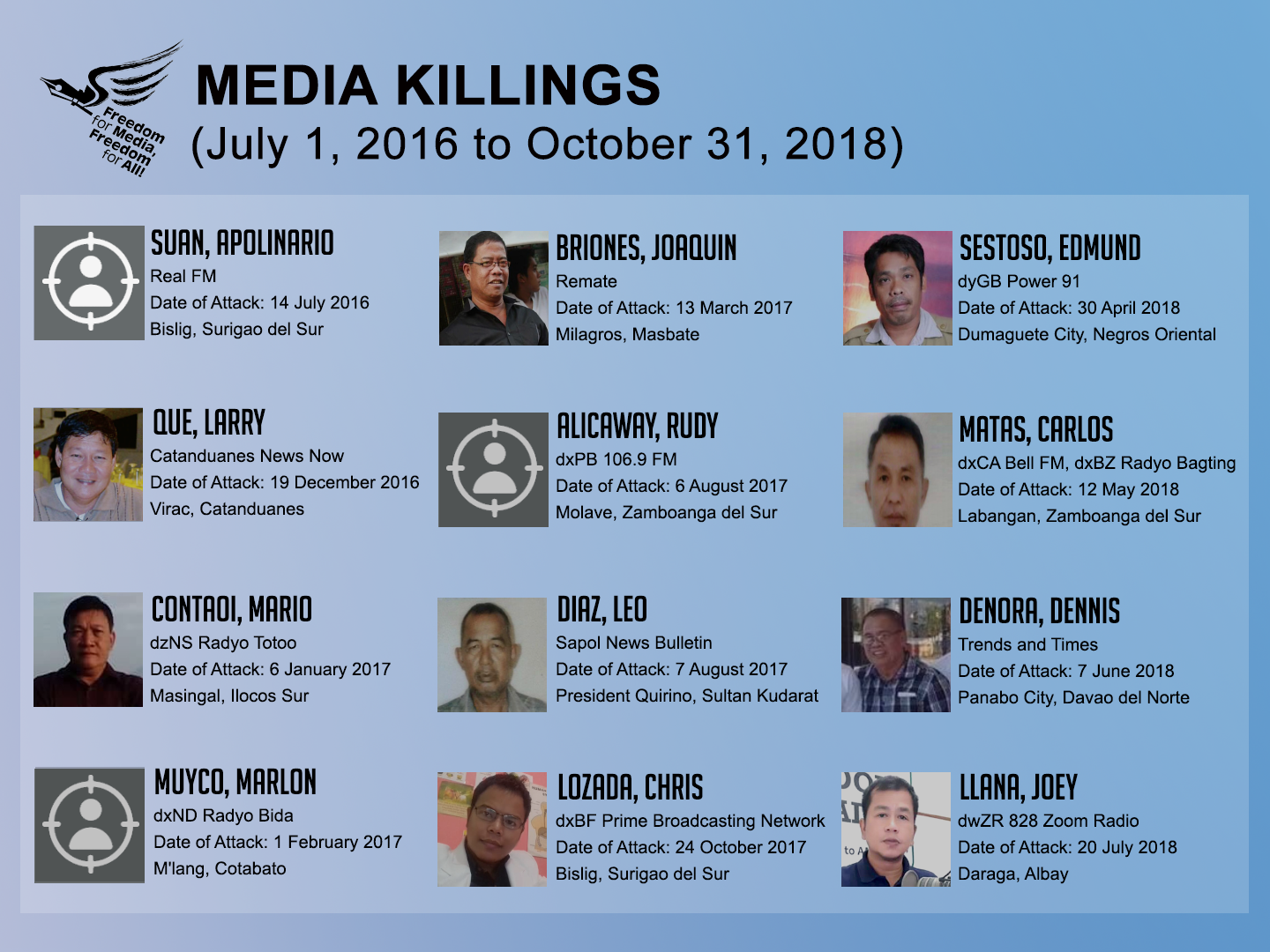 All around the world, the decline of democracy may have muted the voices protesting attacks and threats against the press and journalists. Indeed in some countries governments have gained support for reining in and restraining the press, even regulating and controlling its practice.

The prospects for press freedom and citizen support for journalists are endangered in a period of rising authoritarianism. Citizens have been misled to support the ascent of autocratic leaders promising quick solutions to embedded ills. Citizens have been made to believe that the democratic experiment has failed; thus a new order must be created where the people’s interests come first, even at the sacrifice of inalienable freedoms.

Recent Philippine history shows that popular submission to a regime of control and acceptance of the suspension of basic civil and political rights, including the freedom of the press and expression, have led to serious repercussions, not least of which are a treasury beggared by crony capitalism, an educational system in shambles, and a press intimidated into silence that has kept the public ignorant of the true state of the nation. 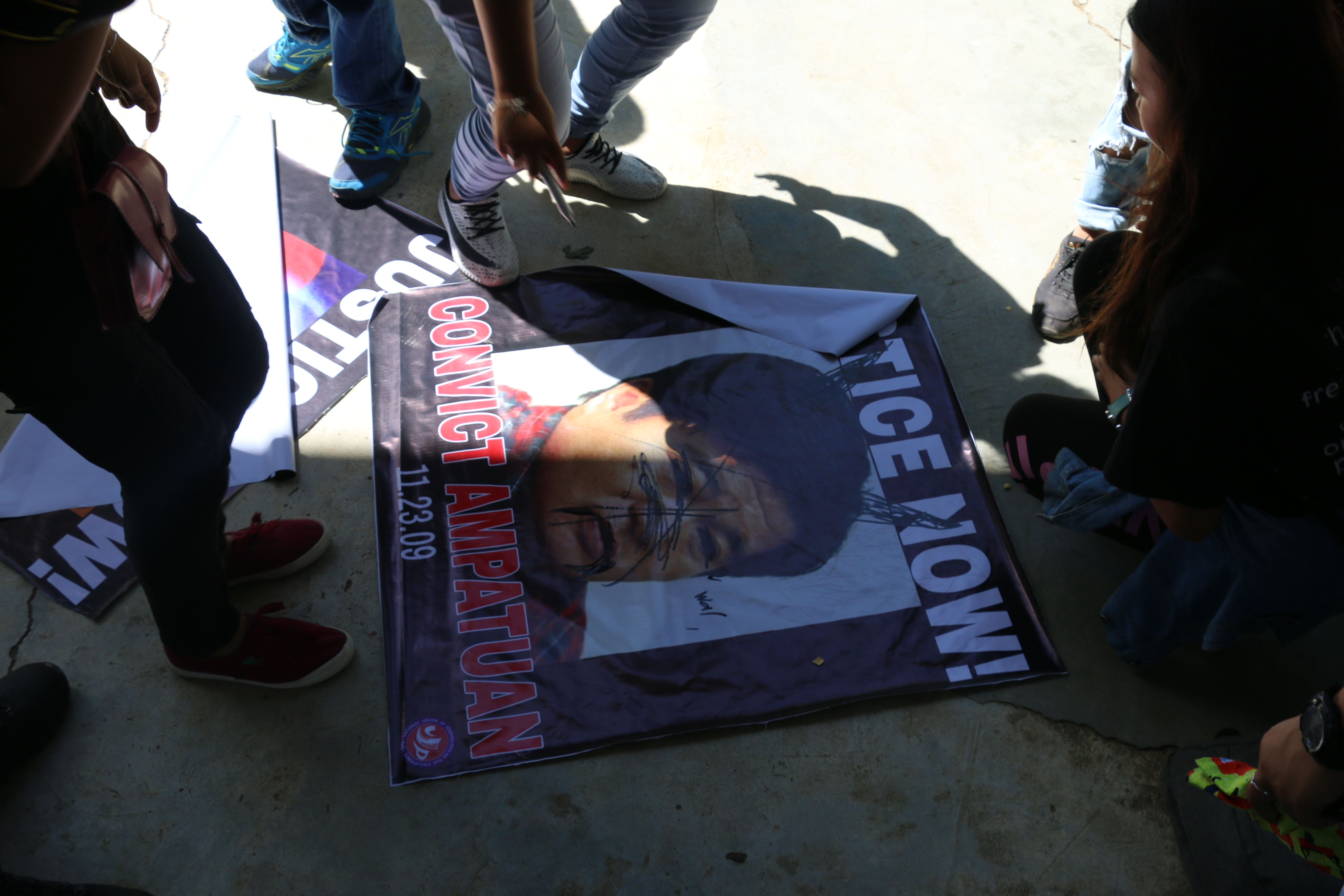 In over two years of the Duterte administration, Filipinos have once again played along with the seductive pledge of quick fixes. But democratic development is a slow process, and can be exhausting.

Sadly, the press is confronted once again with multiple challenges: a beleaguered state of affairs entails full discourse on issues of governance, the wayward conduct of certain public officials and state agencies that require close scrutiny, their failures investigated, and accountability and responsibility clearly defined.

The news media are central to the capability of a national community to think out these problems, with leaders in constant conversation not just amongst themselves; but openly analyzing and explaining what these issues involve and what can be done to move to fair and speedy action and solutions. 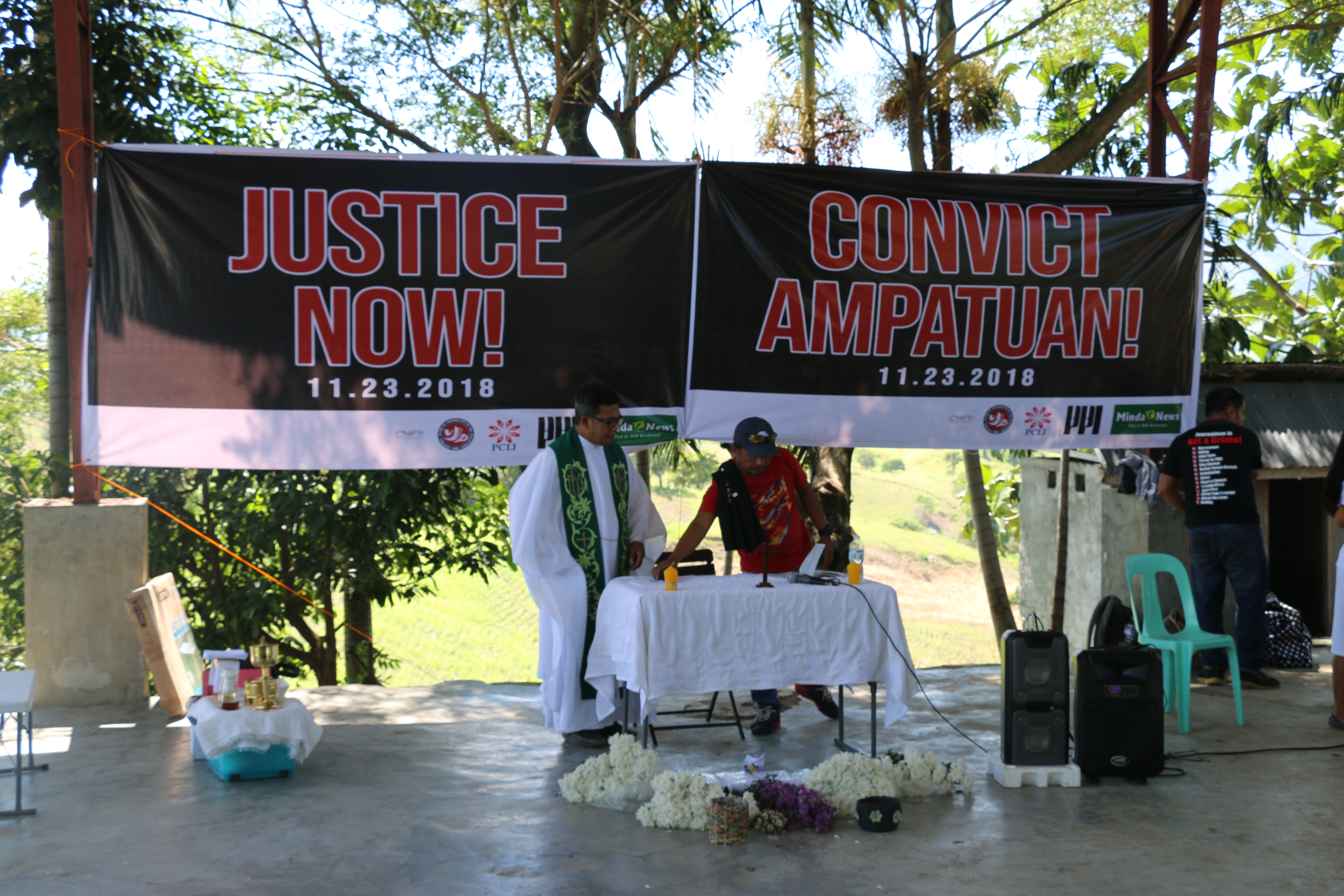 Journalists must commit to learning more about the background of the news in order to more faithfully report, or interpret the meaning of what is happening.

Yet still, the culture of impunity, the failed observance of human rights by state agents; the vulnerability of journalists to legal threats or worse, lies, to a great extent within the ambit of the courts; the application of rules and procedures that delay justice; the bias of these procedures for the rich accused of crimes on display by officers of the law; the richly paid legal eagles drawn into service of defending those with the means to afford their extravagant fees, linger in our midst.

Journalists, unlike government officials are not sworn into office, but the practice is based on a sacred trust — protected by no less than the Constitution — to provide the news and information that the people need to know about, with analysis and interpretation so citizens can make sense of what is going on and formulate sound judgments and decisions.

The restoration of democracy in the years that followed the fall of the Marcos dictatorship have gathered advocates around the task of protecting and defending press freedom and the safety and welfare of journalists. 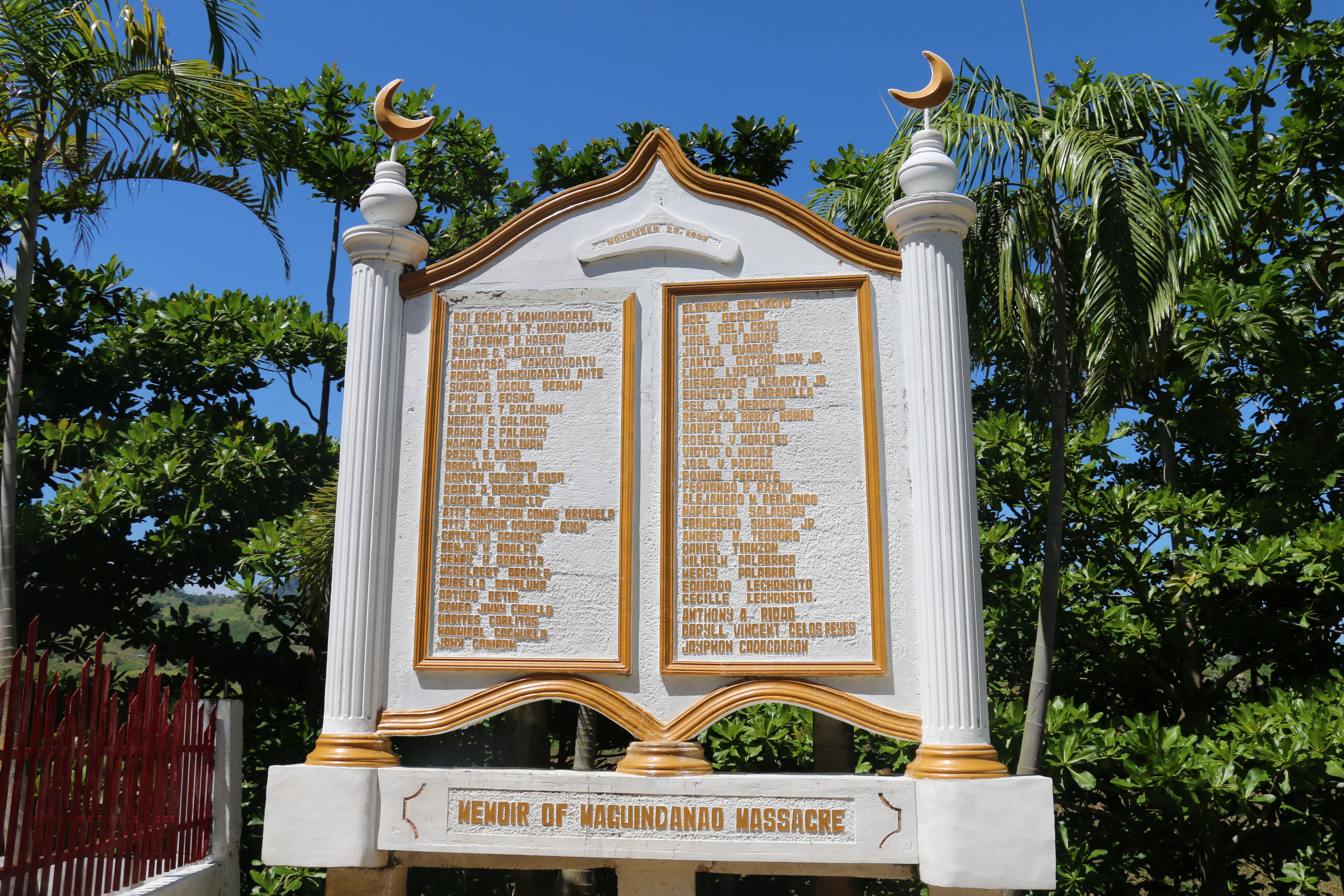 But today under the Duterte administration, never has so much darkness hovered over the prospects of free and independent journalism since the democratic recovery of 1986.

How does the media react to this?

It goes timid or it joins the side where political power resides, receiving extra compensation for its efforts. We do not deny the corruption has been an effective silencer of the news that citizens need to know.

Sadly, the observation has been made that the news media has been intimidated into silence on so many issues. There remains, however, a great many journalists who continue to report on stories that may put their lives in danger.

Those who have joined in the collective resolve to stand up and insist on the freedom to report, on the free flow of information, not just for journalists but for all citizens; those who speak on behalf of those who are attacked and threatened, besieged, and beleaguered, must learn to work together, gaining strength from one another! 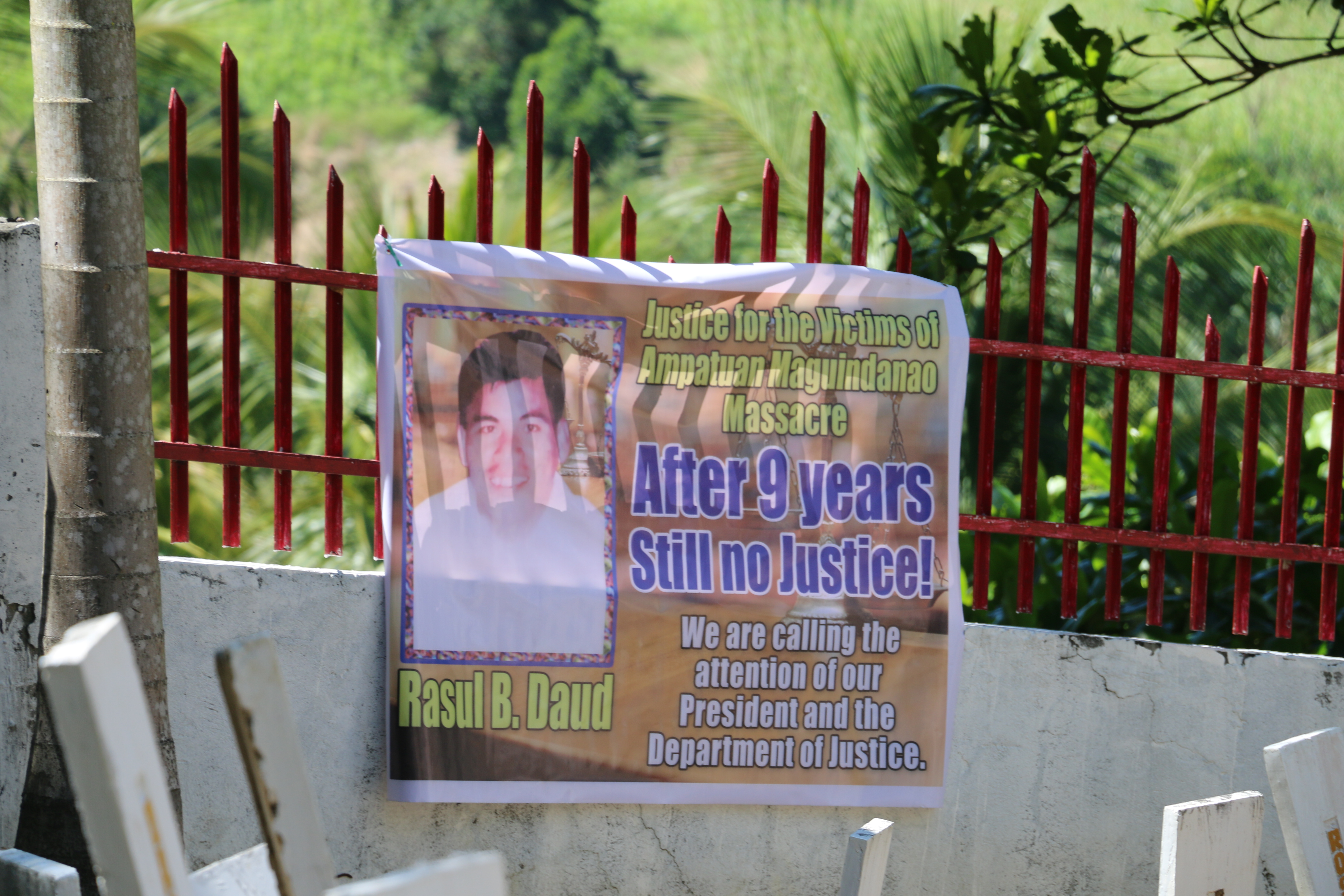 Today, the ninth anniversary of the Ampatauan Massacre of Nov. 23, 2009, we call on Filipinos to support press freedom and to come to the defense of those in media who struggle working within the narrowing space and time, to counter false narratives and disinformation, and to check the abuse of power.

Even in small measures, the exercise of freedom strengthens and nurtures the human spirit, invigorate the energies that will empower citizens to speak truth to power. Hope springs from in the power of truth to make us all informed and free.

In a similarly distressing time, journalists need to reach out to one another and build alliances so they can altogether secure the channels and platforms for truth.

That struggle must acknowledge the perils of the exercise, but also the great power of solidarity and sustained defense of press freedom and the people’s right to know.

The victims of attacks and threats against media freedom may be fewer than the other victims of violence in Philippine society today. But these target and weaken the institution that provides and sustains for all citizens the conversation about issues that matter, and upholds the integrity of political communication, without which the press cannot check the abuse of power.

And so we must work to keep a record of lives lost, or rights denied or diminished, of access limited or eliminated, of attacks and threats that rob us of our peace, safety, and freedoms. — 23 November 2018, CMFR, NUJP, PPI, MindaNews, PCIJ