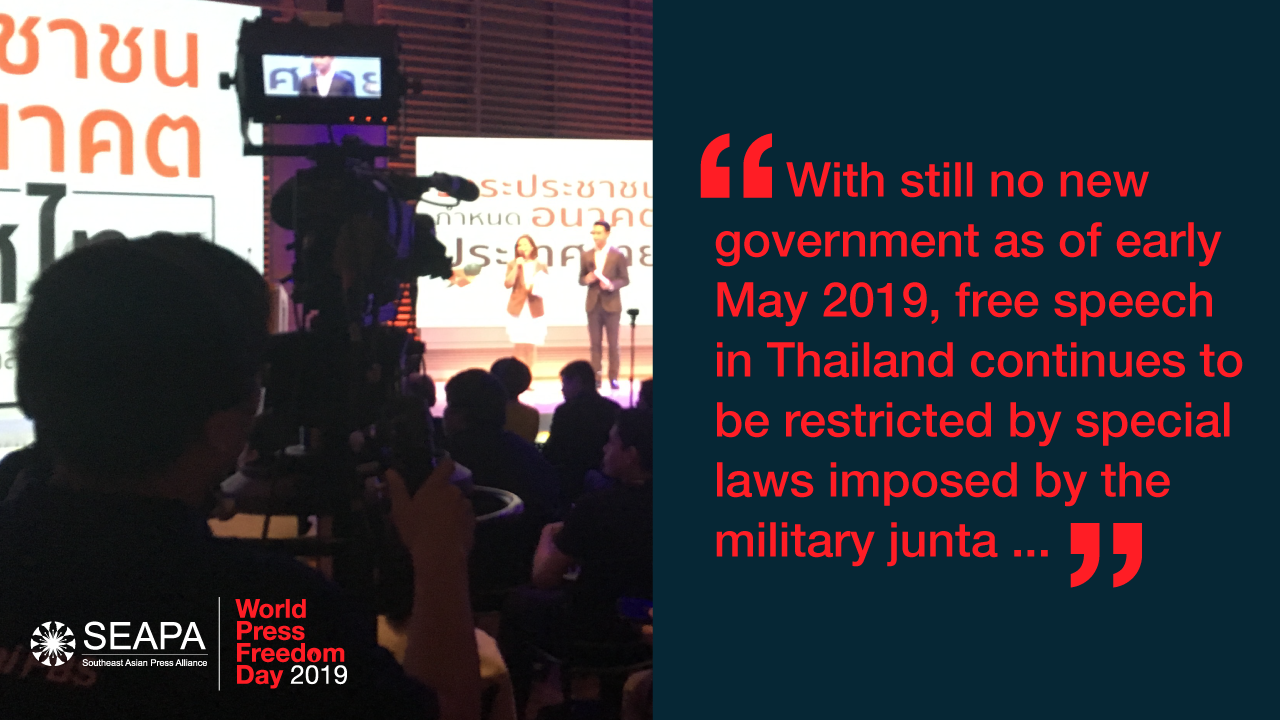 WITH STILL no new government as of early May 2019, free speech in Thailand continues to be restricted by special laws imposed by the military junta, officially known as the National Council for Peace and Order (NCPO), which seized power from an elected civilian government in May 2014.

Specifically cited by the Thai Journalists Association (TJA) in its 2018 annual report are NCPO Notifications No. 97/2557 and No. 103/2557, clause 5 of NCPO Chief’s Orders No. 3/2558 and No. 41/2559, all of which aim to restrict any criticism of the NCPO or its installed government, or any report deemed to cause confusion or unrest in the society.

The first two ones were imposed by the NCPO a few months after the military coup, while the other two were installed in the years after.

TJA noted in its report that though the Constitution of 2017, which came into force in April that year, does safeguard free speech of Thai people in Section 34 and specifies the protection of freedom of media professionals in Section 35, these NCPO special laws are still being enforced, contrary to the Charter’s provisions.

TJA and its associated media organizations have jointly opposed the exercise of power under these special laws by the National Broadcasting and Telecommunications Commission (NBTC), the country’s regulator of broadcasting and telecom industries, to suspend the operations of two television broadcasters in 2018 and early 2019. (See sidebar)

Many had hoped that the 24 March 2019 general election would lead to relief from such laws. But while peaceful, the recently concluded polls produced no single political party with a majority in the House of Representatives. As a result, two opposite camps are now racing against each other to form a coalition government.

Pheu Thai Party, associated with former Prime Minister Thaksin Shinawatra and winning the largest number of constituency MPs, announced on 27 March that it had forged an alliance with six other smaller parties to block any attempt by the junta to stay in power.

But the Palang Pracharat Party, winning the popular votes, has nominated the concurrent junta leader and premier, Gen. Prayut Chan-ocha, as the prime minister of a government to be formed after the elections.

The Election Commission of Thailand has said it has until 9 May 2019 to announce the party-list winners of each political party. Only then will the total number of MPs and constituency combined with party-list that each party commands in the House of Representatives become clear.

It is customary that the bloc with the largest number of MPs to enjoy the priority in forming a coalition government. A transitory clause in the 2017 Constitution, however, empowers the NCPO to appoint 250 senators who will sit in a joint session with members of the elected House of Representatives in voting for a new premier after the 24 March elections.

It is expected that these 250 senators, who each have a five-year tenure, will vote for Gen. Prayut. This is a key reason why many critics have argued that the current legal environment is in favour of the pro-junta camp. 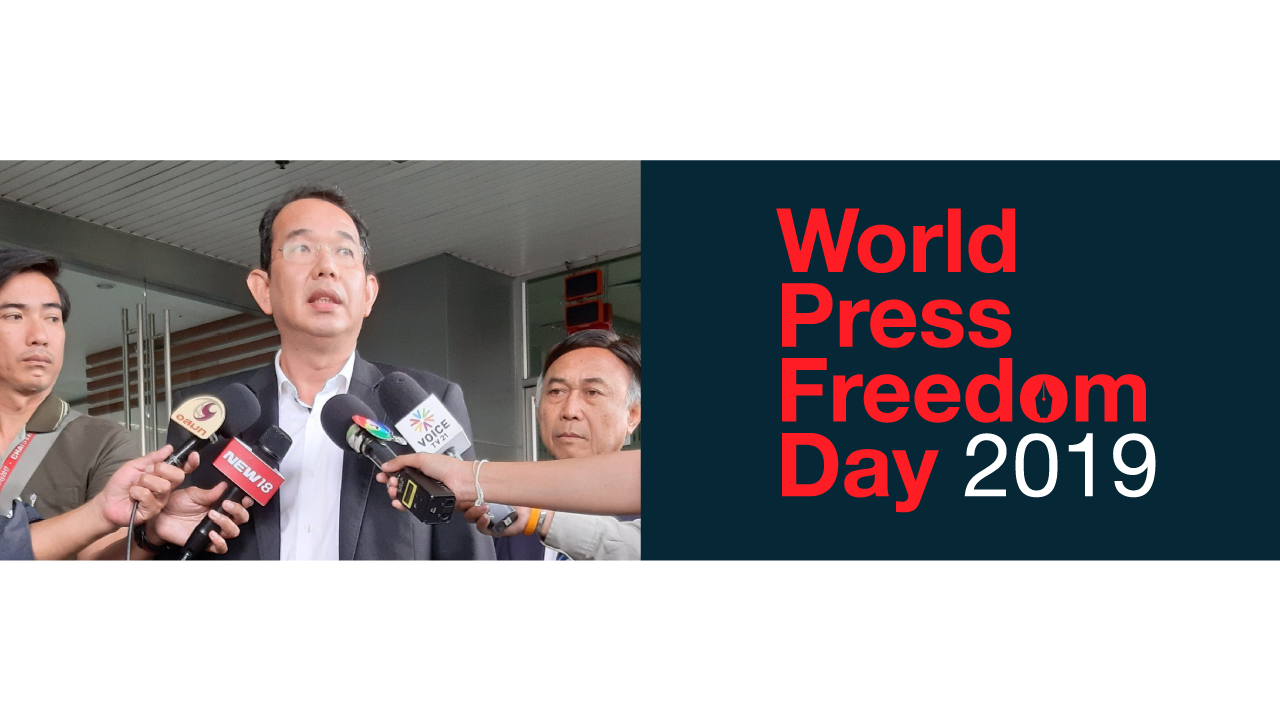 Declining to no profits

Retention of the laws cobbled together under the junta may only mean more trouble for the media, which already have been having tough times, businesswise.

For instance, Chiang Mai News, a newspaper that covered the northern region for over 27 years, has migrated to online since March 2018, while news magazine Siamrat Weekly published its last edition on 4 January 2019 after 66 years.

Student Weekly, a sister publication of Bangkok Post, was last seen on newstands for its 30 September 2018 edition. For over half a century, it had been a vital tool of Thai students who wanted to practise their English language.

Praew magazine, a key lifestyle magazine, switched from biweekly to monthly format in October 2018, while Starpics, a monthly entertainment magazine, published its last issue in April 2018 after 52 years in business.

Thai Rath, a Thai-language daily that has the largest circulation in the country, has recently joined the restructuring of print media by launching a voluntary retirement scheme for its employees to cut costs.

The broadcasting industry has not been doing any better, with the junta government having intervened to help operators of terrestrial digital television pay licencing fees to the National Broadcasting and Telecommunications Commission (NBTC). Back in 2014, the Commission had issued 24 such licences through auctions. Most of these licencees, however, have been operating in red ever since due to the high licence fees and continued sluggish economy.

Thai TV Co., Ltd., an operator of two such channels, was allowed to terminate its two licences on 1 November 2015. Just recently, Gen. Prayut, as the NCPO chief, issued order No. 4/2562, allowing existing operators who want to terminate their broadcast operations to give up their licences by notifying the NBTC within 30 days from 11 April 2019. The order also waived the payment of certain remaining licencing fees for licencees who choose to continue their digital television operation.

The past year, however, managed to have a handful of high moments for free speech and freedom of expression.

According to the rights organization iLaw, in 2018 there was only one new court case of lese majeste, or Section 112 under the Criminal Code, which penalizes any person who defames, insults, or threatens the king, queen, royal heir-apparent, or the regent with a jail term of up to 15 years. At least five such cases were dismissed last year, iLaw also said.

A related development was that the Office of the Attorney General has now taken the centralized command of making decision on whether to prosecute any lese majeste charges.

In a circular to all senior prosecutors dated 21 February 2018, Deputy Attorney General Pornsak Srinarong said that any prosecutor office that has received any lese majeste case should now report it to the Office of the Attorney General with all documents related to the case.

The circular also said that if a lese majeste case is already being prosecuted in court, the prosecutor office responsible for such case should send a copy of the written judgement of the first court or appeal court to the Office of the Attorney General.

The letter said that the new practice aims to allow the prosecution of Section 112 cases to proceed with “prudence and tautness”.

Previously, each prosecutor office that had received a lese majeste case report from police investigators got to decide on whether to file such a case with the court or not. This had caused disparity in the prosecution of these high-penalty cases.

Observers believe that the Office of the Attorney General’s new instruction could set certain standards in the prosecution of lese majeste cases and could lead to fewer such cases.

The latter had barred any gathering of five people or more and could subject the offender to a jail term of up to six months, or a fine of 10,000 baht (about US$317), or both. But on 20 January 2018, a group of young activists started walking from Thammasat University campus at Rangsit, in the northern suburb of Bangkok, for a distance of over 400 kms to Khon Kaen province in the northeast in campaigning on various human-rights issues.

The “We Walk” campaign was followed by “We Want Elections” rallies on 27 January at the Bangkok Art and Culture Centre, in the commercial heart of the capital, by people who wanted an early general election; this was after it became clear that Thailand would not have a general election by 2018.

The “We Want Elections” campaign held other rallies and activities throughout the first half of 2018, said iLaw in its latest annual report, despite having been monitored and repeatedly interrupted by security officers.

This was even as the possibility loomed of Order No. 3/2558 being applied to the participants of such activities, along with Section 116 of the Criminal Code — seen as the sedition law and which covers any act that will “raise unrest and disaffection amongst the people in a manner likely to cause disturbance in the country”.

The provisions of Section 116, in fact, have been broadly applied to prosecute any person that published criticism of the junta or government, staged any protest, or even simply called for an early election. Section 116 imposes a jail term of up to seven years.

But as iLaw observed, these did not seem to have discouraged activists as various anti-junta activities were staged throughout 2018, with leaders and participants of these movements being charged and arrested.

In late September, the nation even found itself listening to a Thai-language rap song “Prathed Goo Mee (What’s My Country Got?)”, composed by a group of rappers calling themselves ‘Rap Against Dictatorship’. The song was a satirical expression of Thai politics in the past 10 years and a criticism of the NCPO.

The song’s music video was uploaded on YouTube on 22 October 2018, and it instantly became the talk of the town. By the middle of December 2018, the video had commanded 46.8 million views.

In its annual report, iLaw called 2018 as “the year of resistance”.

Three new laws, however, are poised to affect the liberties of Thais, including members of the media — and not always in a good way. These are:

The most critical provisions of this new law lie in Section 6, which says that in case of necessity to obtain any intelligence, NIA “may carry out any means including using electronic devices, scientific devices, telecommunication equipment, or any other technology to obtain such information or document”. The NIA director, with the prime minister’s approval, shall lay down the regulations in implementing these provisions.

This Section 6 also stipulates that implementation of these provisions shall be deemed as “lawful” if officials do so in accordance with their duty and authority in good faith and reasonably, and for the benefit of security and prevention of public danger.

The provisions in Section 6, which were not included in the 1985 law, mean that the NIA can now “lawfully” tap any telephone conversation or eavesdrop any electronic communication if the agency sees the need, without having to seek any court warrants or approval. This can also be done even in time of normalcy. Usually, these kinds of action are permitted only when the country is under martial law or a state of emergency.

The Act, which became effective on 17 April 2019, also creates a national intelligence coordinating centre within the NIA to liaise on intelligence matters with other agencies in the country.

 The Cyber Security Act of 2019, which aims to create a set of mechanism to safeguard the nation’s information infrastructure from any cyber attack, domestically or overseas. At the highest national level, the law creates a National Cyber Security Committee to be chaired by the prime minister in formulating policies, plans, and management requirements on cyber security for state agencies and “key information infrastructure agencies”.

It then sets up a cyber security oversight committee, chaired by the minister of digital economy and society, to monitor the implementation of policies and plans formulated by the national committee. Both committees will be backed up by a secretariat, within which a national computer system security coordinating centre will be created.

The Cyber Security Act — the first of its kind for Thailand — does specify the three types of agencies that will be covered by the law: state agencies, controlling or oversight agencies, and key information infrastructure agencies. These agencies are now required by the Act to create, without delay, their own standard procedures in responding to the national plans on cyber security.

Although in principle the Act does not aim to affect any rights of individuals, its implementation could. The law categorizes cyber threats into three layers of severity: non-harmful, harmful, and critical.

It defines critical cyber threats as widespread attacks that cause failure in services of key information infrastructure, and cyber attacks that affect public order or national security. The Act says in time of critical threats, the National Security Council will be responsible for handling the situation.

 The Personal Information Protection Act of 2019, which sets up requirements on collecting information of individuals by public or private sectors, and creates a complaint procedure whereby individuals can file complaints if their personal information is not collected or used accordingly to the law. – Southeast Asian Press Alliance (SEAPA), May 2019