The President and the Press:
A Timeline of Hostilities Against the Media

BY ALL indications, President Rodrigo R. Duterte has no love lost for independent and critical media.

In about two dozen times in his 34 months in office, he has openly expressed his displeasure and disaffection, and in rancorous prose called journalists names and foisted threats both veiled and naked against certain media agencies.

In his own words, here’s a timeline of the things that President Duterte has said about the press. 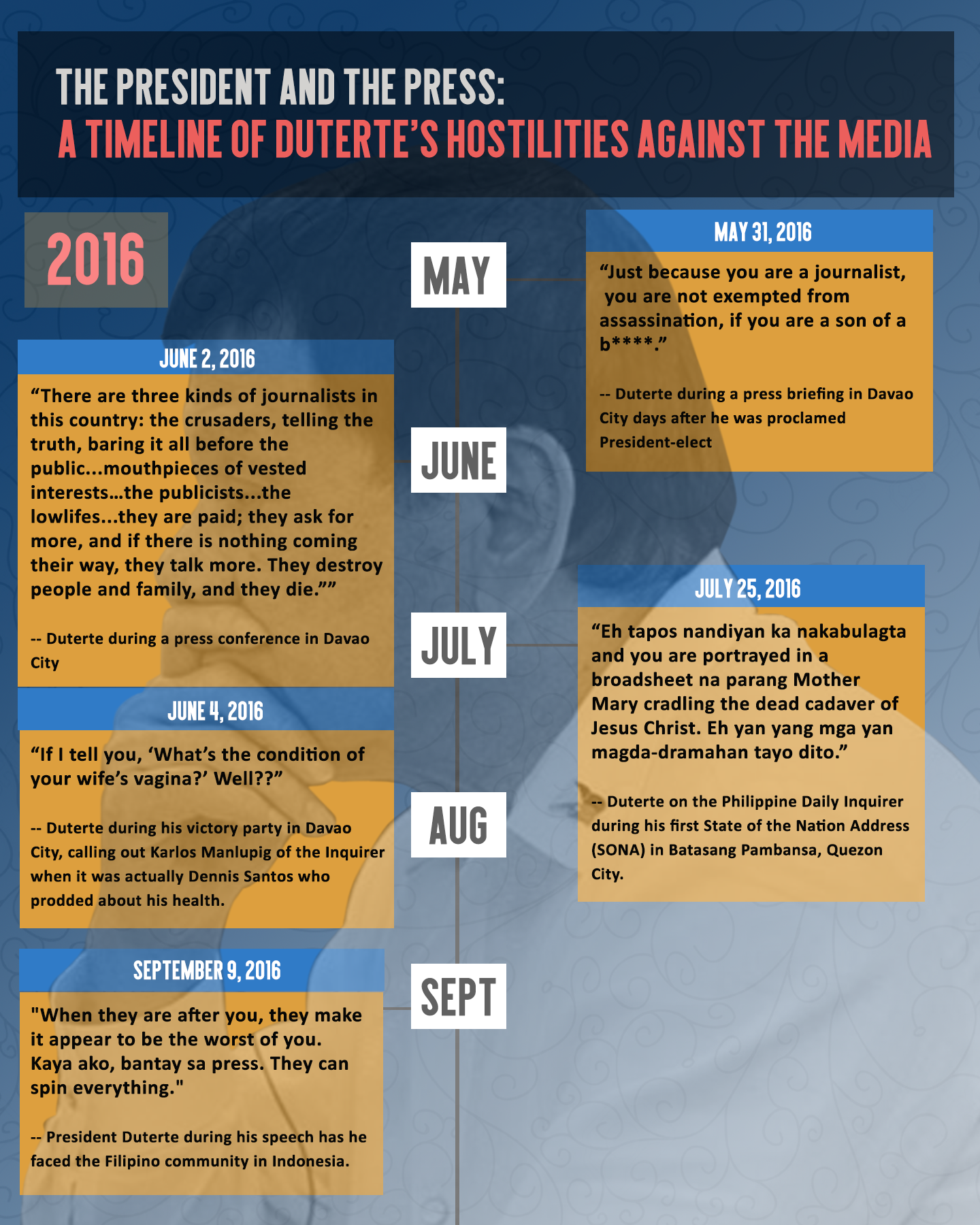 May 31, 2016
“Just because you are a journalist, you are not exempted from assassination, if you are a son of a b****.”
Duterte during a press briefing in Davao City days after he was declared President-elect.

June 4, 2016
“If I tell you, ‘What’s the condition of your wife’s vagina?’ Well??”
Duterte during his victory party in Davao City, calling out Karlos Manlupig of the Inquirer when it was actually Dennis Santos who had asked him about his health.

September 9, 2016
“When they are after you, they make it appear to be the worst of you. Kaya ako, bantay sa press. They can spin everything.”
Duterte, speaking before the Filipino community in Indonesia. 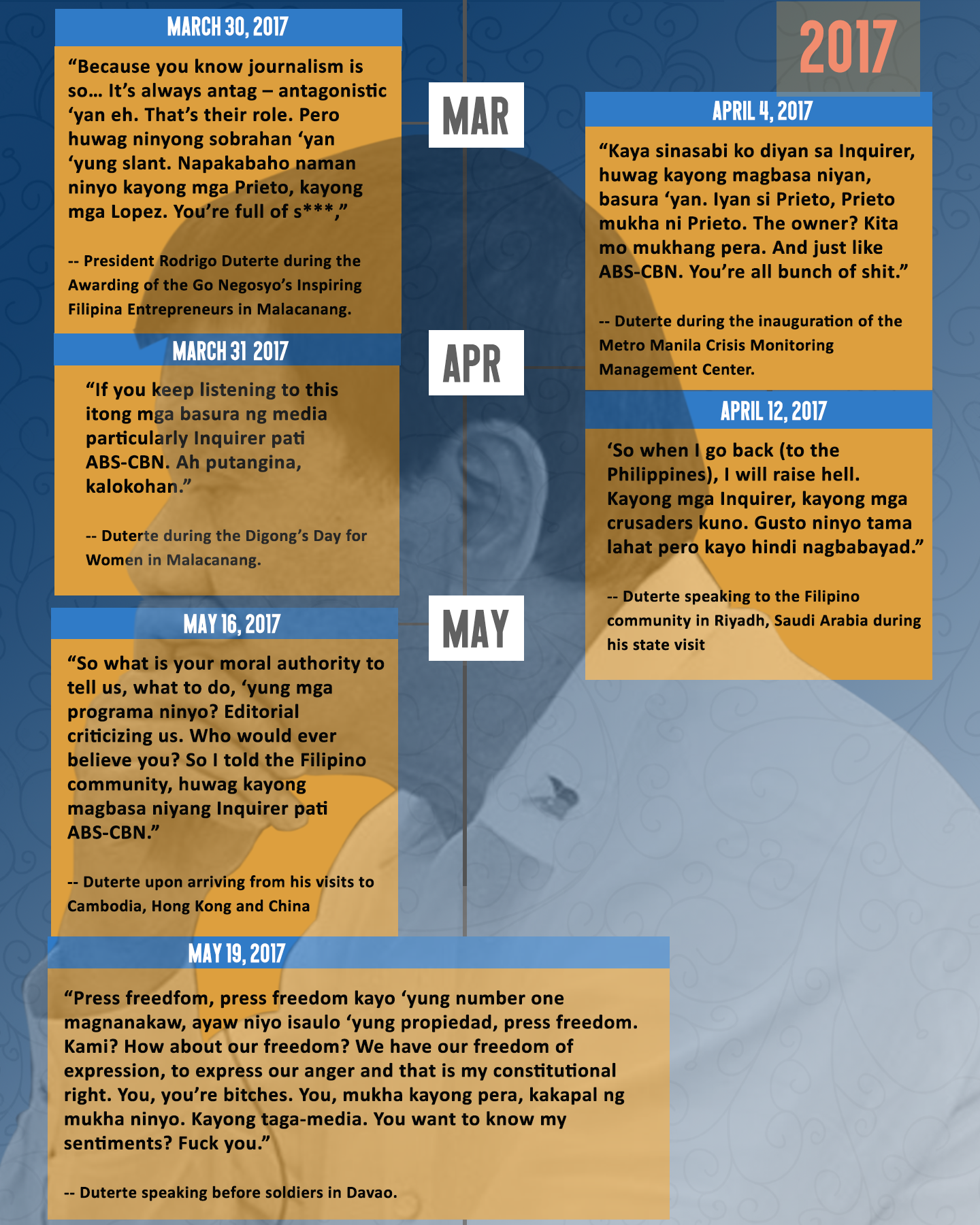 April 12, 2017
“So when I go back (to the Philippines), I will raise hell. Kayong mga Inquirer, kayong mga crusaders kuno. Gusto ninyo tama lahat pero kayo hindi nagbabayad.”
Duterte speaking to the Filipino community in Riyadh, Saudi Arabia during his state visit

May 16, 2017
“So what is your moral authority to tell us, what to do, ‘yung mga programa ninyo? Editorial criticizing us. Who would ever believe you? So I told the Filipino community, huwag kayong magbasa niyang Inquirer pati ABS-CBN.”
Duterte upon arrival from his visits to Cambodia, Hong Kong, and China

May 19, 2017
“Press freedom, press freedom kayo ‘yung number one magnanakaw, ayaw niyo isaulo ‘yung propiedad, press freedom. Kami? How about our freedom? We have our freedom of expression, to express our anger and that is my constitutional right. You, you’re bitches. You, mukha kayong pera, kakapal ng mukha ninyo. Kayong taga-media. You want to know my sentiments? Fuck you.”
Duterte speaking to soldiers in Davao City. 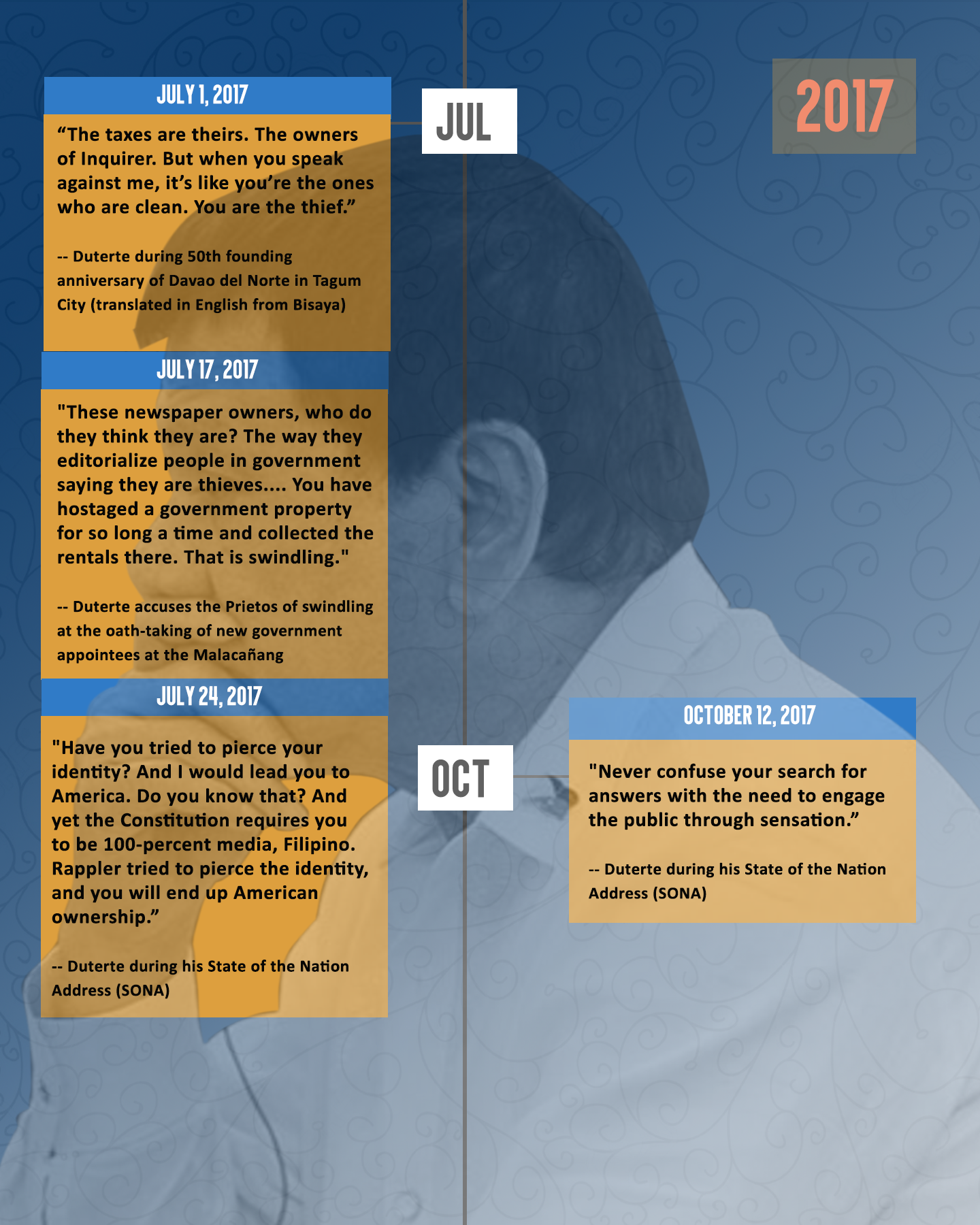 July 1, 2017
“Ila pa ang taxes. Kanang mga tag-iya ng Inquirer kaya… pero kung magsalita kayo kontra sa akin, akala ‘nyo sino ang malinis. Kayo ang mga tulisan (The taxes are theirs. The owners of Inquirer. But when you speak against me, it’s like you’re the ones who are clean. You are the thief).”
Duterte during 50th founding anniversary of Davao del Norte in Tagum City

July 17, 2017
“These newspaper owners, who do they think they are? The way they editorialize people in government saying they are thieves…. You have hostaged a government property for so long a time and collected the rentals there. That is swindling.”
Duterte accuses the Prietos of swindling at the oath-taking of new government appointees at Malacañang Palace

July 24, 2017
“Have you tried to pierce your identity? And I would lead you to America. Do you know that? And yet the Constitution requires you to be 100-percent media, Filipino. Rappler tried to pierce the identity, and you will end up American ownership.”
Duterte, during his State of the Nation Address.

October 12, 2017
“Never confuse your search for answers with the need to engage the public through sensationalized news and over-publicizing political propaganda.”
Duterte at the relaunching of the Malacañang Press Briefing Room

January 16, 2018
“Listen very carefully. ‘Yung, ‘yung release ninyo. We never had a hand and I don’t give a s*** if you continue or not continue with your network.”
Duterte to Rappler during the inauguration of the new communications, navigation, surveillance/air traffic management systems.

“Since you are a fake-news outlet then I am not surprised that your articles are also fake,”
Duterte referring to Rappler.

(President Rodrigo Duterte on Thursday said he was just “invoking executive action” when he ordered the ban on all Rappler reporters from covering the Office of the President.)

August 3, 2018
“Now, ABS-CBN, their franchise is due for renewal… But I will never also intervene. But if I had my way, I will not give it back to you.”
Duterte during a speech during the opening of a drug rehabilitation facility in Malaybalay City, Bukidnon. 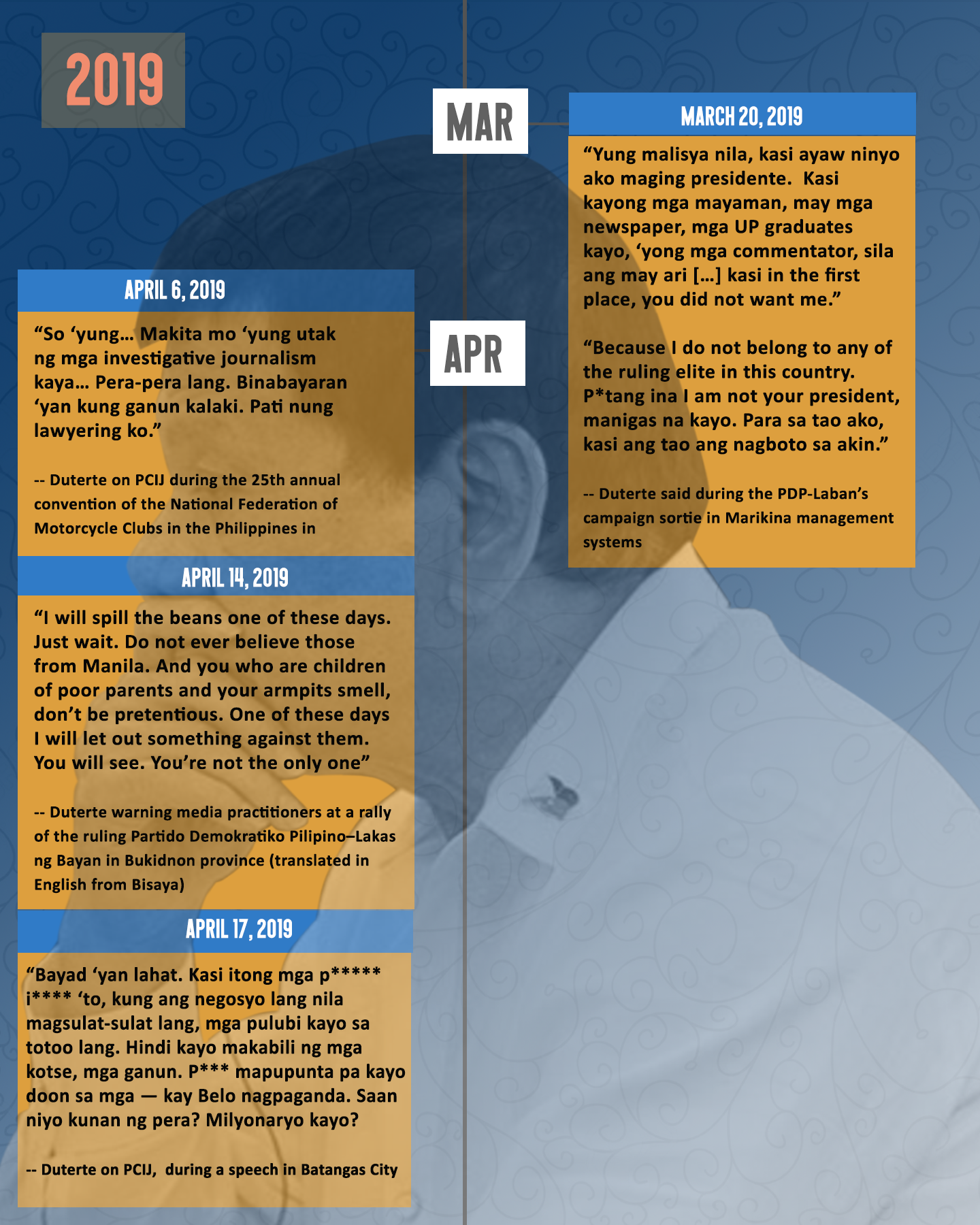 March 20, 2019
“Yung malisya nila, kasi ayaw ninyo ako maging presidente. Kasi kayong mga mayaman, may mga newspaper, mga UP graduates kayo, ‘yong mga commentator, sila ang may ari […] kasi in the first place, you did not want me.”
“Because I do not belong to any of the ruling elite in this country. P*tang ina I am not your president, manigas na kayo. Para sa tao ako, kasi ang tao ang nagboto sa akin.”
Duterte, during the PDP-Laban’s campaign sortie in Marikina

April 14, 2019
“Isulti ko na karong pila ka adlaw. Huwat lang mo. Ayaw gyud mo’g tuo nga kaning mga taga-Manila. Og kamo, anak mo’g pobre unya mga baho mo’g ilok kay wa mo’y kwarta, mas baho pa siguro nang inyong – ayaw gani mo’g inarte. Sige lang kay naa ko’y ipagawas pud kontra nila. Makit-an ninyo. Abi ra’g kamo ra (I will spill the beans one of these days. Just wait. Do not ever believe those from Manila. And you who are children of poor parents and your armpits smell, don’t be pretentious. One of these days I will let out something against them. You will see. You’re not the only one).”
Duterte warning media practitioners at a rally of the ruling Partido Demokratiko Pilipino–Lakas ng Bayan in Bukidnon province.