The Tripoli Agreement of 1976: Lessons,
impact on the Mindanao peace process

A FORTNIGHT AGO on July 27, 2018, President Duterte signed Republic Act No. 11054 or the Bangsamoro Organic Law (BOL) that was finalized by the Senate and the House of Representatives bicameral conference committee, and which enrolled some amendments to the draft submitted by the Bangsamoro Transition Committee. A ceremonial signing event was held on Aug. 6, 2018. But the seminal document covering the peace process in Mindanao, The Tripoli Agreement, was signed in 1976, or over two generations ago. This guest article offers the backstory of negotiations for peace and development in Southern Philippines. 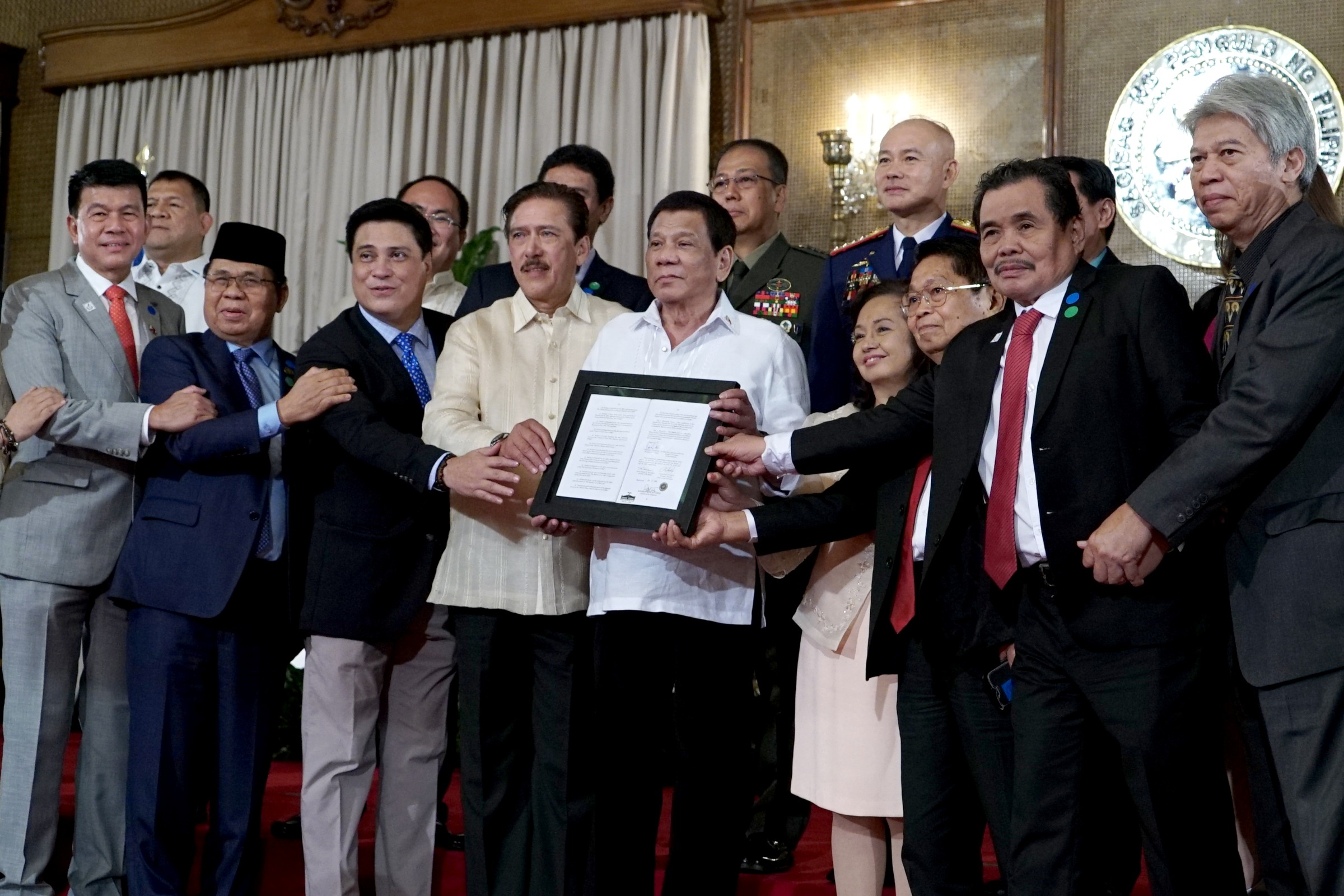 ALMOST 42 years ago, an important document signed in Tripoli, Libya became a benchmark in the history of the Mindanao peace process. On 23 December 1976, the Government of the Republic of the Philippines (GRP) and the Moro National Liberation Front (MNLF) signed the Tripoli Agreement, which created the first autonomous region in the southern Philippines.

More than just providing for the first autonomous region in Mindanao, the Tripoli Agreement symbolized the highly indefinite, open-ended and circuitous nature of the Mindanao peace process. The agreement also signalled the beginning of the internationalisation of intrastate conflict resolution in the Philippines, a departure from the so-called ASEAN (Association of Southeast Asian Nations) convention of non-interference into member states’ internal conflicts. The new strategy involved the facilitation and mediation of international bodies like the Organisation of the Islamic Conference (OIC) and the good offices of a foreign government—that of Libya.

As the very first peace accord signed between the Philippine government and a Moro rebel group, the Tripoli Agreement was only a small step, but it was hoped it would be an important step in the right direction—towards lasting peace in the Bangsamoro, then in all of Mindanao and eventually in the entire country. Unfortunately, the accord started what became a protracted peace process on the wrong foot, and for the wrong reasons.

Considered one of the world’s longest-running internal conflicts, the armed hostilities in the southern Philippines involved the Armed Forces of the Philippines (AFP) and different iterations of Moro rebel groups, starting with the MNLF, which was created in the early 1970s.

As signing an agreement with the MNLF at the urging of a global power like the OIC was no small concession for Philippine dictator Ferdinand Marcos, the agreement was considered a pyrrhic victory for the MNLF and a breakthrough for peace. However, it provided only false hopes to Philippine peace constituencies and did not fulfil its promise.

As noted earlier, the Tripoli Agreement was a benchmark in the long history of the Mindanao peace process. For one, it firmed up the MNLFs’ position of belligerence vis-à-vis the Philippine government. This distinctive position came with the added bonus of the MNLF’s being accorded observer status in the meetings of the Organisation of the Islamic Conference (OIC), a status that continues to the present day. For another, the Tripoli Agreement was evidence of the Philippine government’s acquiescence to a geopolitical game changer—the increasing political power of certain OIC countries, almost all of which were awash in black gold or oil.

It is widely known that President Marcos decided to seek Libya’s intercession after he learnt of the dwindling oil and fuel reserves in the Philippines at that time. Then and now, the country has been dependent on the Middle Eastern oil-rich member countries of the OIC for its oil supply. The OIC, which saw how Muslims were suffering during Marcos’ martial law, had earlier threatened an oil embargo on the Philippines should the latter refuse to start peace talks with the MNLF. 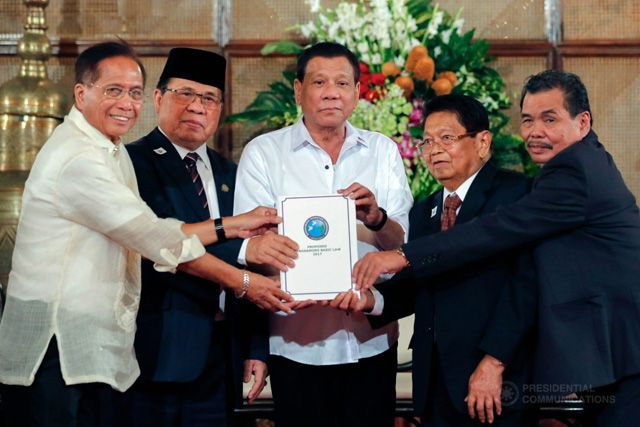 President Marcos consented to sign a ‘peace agreement’ with the MNLF under the aegis of the Libyan government, then headed by Muammar Qaddafi. After a series of meetings with Philippine government representatives, led by no less than the First Lady at that time, Imelda Marcos, Qaddafi facilitated the signing of the Tripoli Agreement in 1976.

However, wily strategist that he was, President Marcos found the means to hoodwink the MNLF into signing an agreement filled with provisions that lacked clarity in terms of future implementation, for example, mantra-like phrases such as ‘to be discussed later’, ‘to be fixed later’ or ‘to be determined later’. Eleven of the agreement’s nineteen provisions ended with either ‘to be discussed later’ or ‘to be fixed or determined later’.

For instance, the provision on the integration or ‘joining’ of MNLF forces to the Philippine military was to be ‘discussed later’. This specific provision started with a statement that defense and national security were the concern of the national or central government. This was a devious way of seemingly consenting to the demands of the other party to share in the powers of maintaining national security, but without operationalizing the granting of authority since the ‘joining’ of the MNLF to the Philippine military forces was to be ‘discussed later’. Opportunities for ‘later’ discussion of MNLF integration were not made available until after the signing of the Final Peace Agreement in September 1996.

The sad consequences of the vague wording were that the ‘fixing’ or ‘later discussion’ stretched to an almost indeterminable time, spanning more than three decades and three presidential terms (1976 to 1996). And nothing was really ever fixed, even after former president Fidel V. Ramos initiated the peace process that led to the signing of the Final Peace Agreement (FPA) with the MNLF on 2 September 1996.

A CAB-compliant BBL was supposed to be approved in the Philippine Congress in mid-2015, but the infamous Mamasapano tragedy, a serious and bloody distraction, occurred on 25 January 2015. Forty-four members of the Special Action Force (SAF) of the Philippine National Police (PNP) and twenty-four individuals, including women and children, lost their lives during the execution of Oplan Exodus, a PNP operation against suspected Malaysian terrorist Zulkiflin bin Hir (aka Marwan) and his close aide, Basit Usman. Marwan had earlier embedded himself among the Maguindanawon communities in a remote barangay of Mamasapano town, allegedly teaching local terrorist groups how to manufacture improvised explosives.

With the assumption to office of the current Philippine president, Rodrigo Duterte, several peace advocates had high hopes that the CAB-compliant BBL, temporarily shelved after Mamasapano and the exit of former president Benigno S. Aquino III, would be enacted. Duterte, who is from Mindanao, had promised prior to his election that he would address the ‘historical injustices’ against the Bangsamoro by expediting the passage of the BBL.

A new BBL version was ready to be submitted when another distraction happened: the Marawi siege, which began on 23 May 2017. People’s optimism was again transformed into pessimism and despair.

For five months, a major part of the city of Marawi was ‘carpet bombed’ (President Duterte’s description of the air strikes) on a daily basis, almost destroying the city’s infrastructure. The strikes were in retaliation for the offensive launched by a ragtag group of ‘terrorists’ called the Maute Group, believed to be supporting the internationally feared terror group ISIS. In support of the massive and aggressive military action against the Maute, President Duterte also declared martial law in Mindanao, a situation that eerily harked back to the dark days of Marcos’ martial law in the 1970s.

Despite a series of lobbying efforts and some community-based consultations, the new BBL version garnered very little support from legislators. Both houses of Congress mangled the BTC version and further undermined the intent of granting genuine autonomy to the Bangsamoro—the main reason for all the previous agreements, especially the Tripoli Agreement.

The fate of the new BBL version now hangs like the proverbial sword of Damocles in the hands of a bicameral committee tasked with reconciling the conflicting upper and lower house versions of the BBL. Peace advocates see only a tiny ray of hope in the members of this Congressional committee, many of whom are known to hold deep prejudices against the Bangsamoro.

More than four decades after the signing of the Tripoli Agreement in 1976, with all the twists and turns in the longstanding Mindanao peace process, there seems to be no hope in sight that the armed struggle of the Moro rebel groups will yield substantial gains in the Bangsamoro’s quest for self-determination.

Would the present peace process and the passage of a truly CAB-compliant BBL have succeeded if the circumstances surrounding the signing of the first Tripoli Agreement had been ‘proper’? Would the present context of the peace process have changed if the Tripoli Agreement had had a rational grounding, i.e. an understanding that it was time to address the long years of historical injustice and the legitimate grievances of the Bangsamoro people rather than buttress the political interests of a dictatorship?

Such rhetorical questions lead us to a future that will recycle the lessons of history that have never been learnt.

* Rufa Cagoco-Guiam is a retired sociology professor at the Mindanao State University – General Santos city. This essay was commissioned by the Sharjah Art Foundation and first published for the exhibition ‘A Tripoli Agreement’ (July 14 – September 1, 2018) curated by Renan Laru-an.