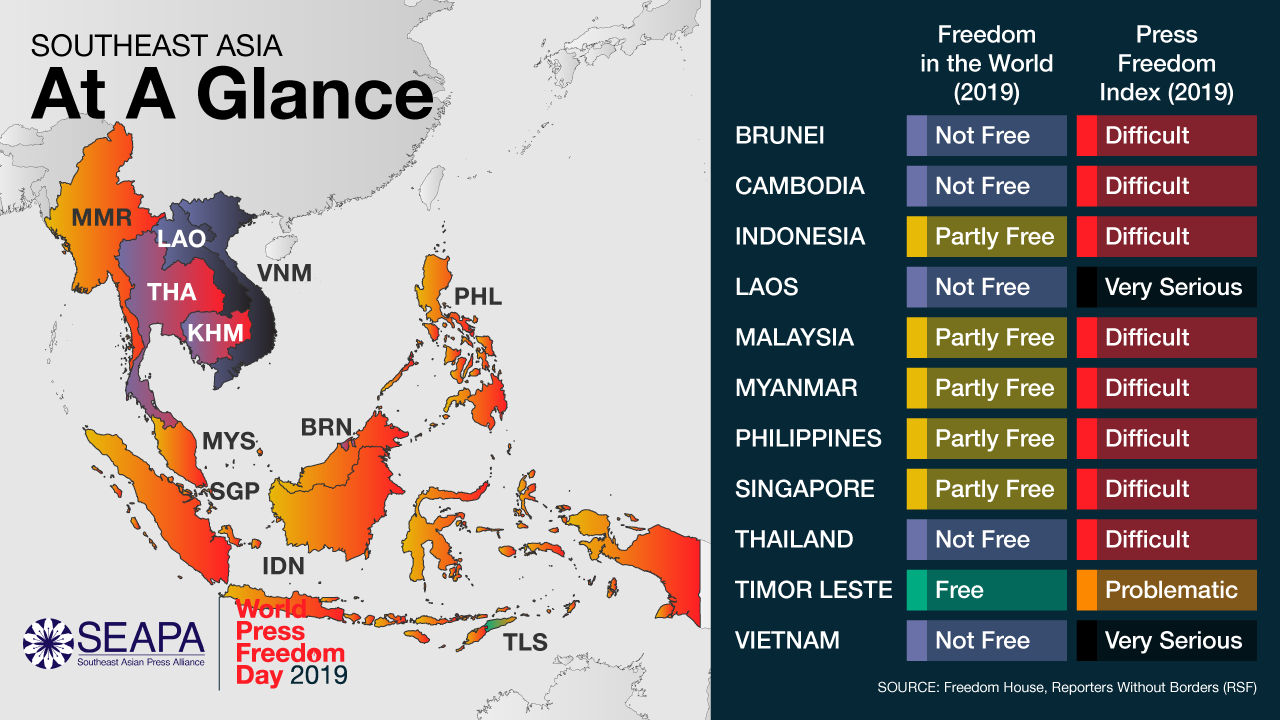 TIMOR LESTE’S ranking in the latest press-freedom index of Reporters Without Borders (RSF) leaped by 11 places from the previous year, but those on the ground do not feel any improvement in the country’s media conditions.

Indeed, in January 2019 alone, there were already at least three cases of press intimidation and interference reported by the media community. On 9 January, Gil da Costa, chairperson of the Board of Directors of the state broadcaster Timor Leste Radio and Television (RTTL), was sacked unceremoniously and swiftly replaced by Francisco da Silva.

Two days later, RTTL EP reporter Constancio Vieira reported to the Press Council of Timor-Leste that the head of Office of the Secretary of State for Social Communication (SECOMS), Julio Goncalves, had threatened to fire him because he had said on social media that press freedom in Timor Leste was now in the ICU. On 28 January, five RTTL journalists led by Nuno Saldanha also went to the Press Council to report that Shinta Hanjan, adviser to new RTTL board chairperson da Silva, had asked for the removal of content from news stories.

RSF’s 2019 Press Freedom Index has Timor-Leste at 84th place, out of 180 countries. Its rank is the highest among the 11 countries in Southeast Asia. But that has been cold comfort for Timor-Leste’s journalists, who say that government officials still do not seem to understand how media work or appreciate and understand freedom of the press. To many, the sudden sacking of da Costa as RTTL chairperson was a significant alarm bell, deeming it as the first direct political interference in a media outlet since Timor Leste became independent from Indonesia in 2002.

Although the official reason for da Costa’s dismissal was the discovery of “irregularities at RTTL” during his tenure, the audit findings have yet to be made public and are apparently not known even to da Costa. The former RTTL chairperson was also not given a chance to defend himself from the allegations. Da Costa was later quoted by local media as saying that he may have been fired for “refusing to allow political meddling in the editorial work of RTTL”.

Articles 40 and 41 of the Timor-Leste Constitution guarantee freedom of the press and freedom of expression. It has also ratified at least 10 international conventions relating to human rights and civil and political rights. In addition, the country has a Press Law (2014) that established the Press Council and, among other things, affirms and guarantees freedom of the press and the citizens’ right to information.

All these, however, made little difference to the officials who RTTL staff said interfered with their work. On 27 December 2018, photojournalist Carlos Malilaka of Timor Post was also threatened by police officers while he was out on fieldwork in a Dili suburb. The police took his camera and deleted all the photos recorded in it. The incident has been reported to the Press Council.

So far, the Press Council of Timor-Leste has held a press conference condemning the political interference in RTTL’s news room and the threat uttered by SECOMS head Goncalvez. The Council also called on state entities to respect freedom of the press and protect the country’s journalists when they are carrying out their media duties.

The Timor Lorosa’e Association or TLJA also had its own press conference condemning the attitude of the SECOMS head, saying he had threatened not just one person, but also freedom of the press itself. A copy of the TLJA press statement was given to the Press Council and the Prime Minister, asking for sanctions to be meted on Goncalvez.

The five-member Press Council consists of a representative of media organizations, two journalists elected by their colleagues to represent them, and two citizens “of recognized integrity and professional merit” appointed by the National Parliament. According to the Press Law, it has the “essential duty to ensure the professional and ethical conduct of journalists and media operators, as well as ensuring compliance with the conditions to access the profession and to perform journalistic activities”.

For sure, media conditions in this young nation are still far from ideal. For one, there are many people – among them members of the security forces and even government officials — who do not understand the work of journalists, placing the latter at risk of violent attacks. In the private sector, many large companies and members of the elite still offer money or envelopes to journalists covering business news and other matters. Too, weak media literacy among the public has meant many Timorese lack the ability to discern news based on facts from stories that are mere rumours or speculation.

Unfortunately, many members of the Timor-Leste media themselves often fall short of professional standards and fail to adhere to the code of ethics and principles of journalism. Some, for example, are too quick to publish without verification and contribute to the spread of false news and sometimes even to conflict. There are also those who are afraid to be critical of those in power and end up practising self-censorship. Moreover, the failure of some journalists to research and improve their understanding of the subjects they are covering have led to too many stories that lack analysis and substance.

In the meantime, the Timor-Leste media community is closely following discussions on two legislative proposals that may have a significant impact on media freedom and freedom of expression.

The National Parliament, for instance, has expressed its concerns over the misuse of social media, saying that this has not been used as an informative and educative means of modern communication. MPs have publicly criticized social-media users as irresponsible and instrumental in spreading rumours, hoaxes, and disinformation, as well as having insulted the country’s leaders. All these could lead to political instability, the lawmakers have said. Parliament has thus called on the Ministry of Transportation and Telecommunication to draft a law in order to regulate the use of social media in the country.

SECOMS, for its part, is planning to draft a cybercrime law. According to SECOMS, the Press is too general, which makes it necessary to have a special law for cyber-media. But while there are those who welcome the proposal, some observers are suggesting caution and urging proponents to first study existing laws to avoid overlaps and conflicts in objectives. Too, they stress the need for consultation with various entities to ensure a rich and balanced discussion, and that freedom of expression and freedom of the press are not compromised. – Southeast Asian Press Alliance (SEAPA), May 2019