CITIES ARE where all kinds of opportunities can be found – and, unsurprisingly, where a lot of voters in this country happen to be.

As of records from the 2013 elections, the top 50 vote-rich cities across the Philippines have as much as 13.9 million of the nation’s voters. That is about one fourth of the latest total number of registered voters (54.4 million), and a sizeable chunk that could give a crucial boost to the chances of any national candidate winning in the upcoming elections.

Yet another no-surprise is that 38 out of the 50 vote-rich cities are in Luzon, the biggest island group, while seven are in Mindanao and the remaining five in the Visayas. 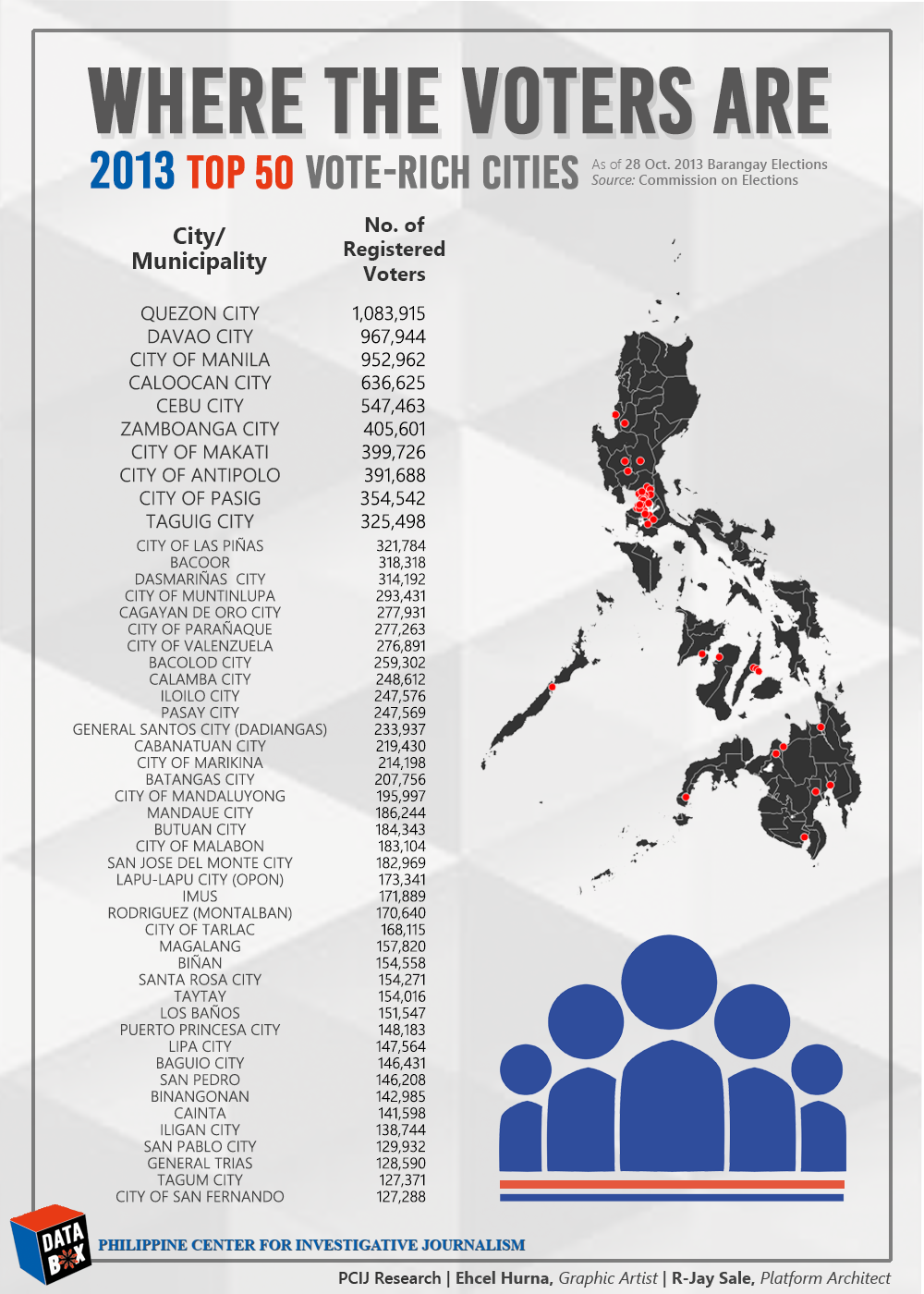 Some of the candidates for the country’s two highest posts have considerable ties to a few of these cities. For instance, Quezon City, under the leadership of Mayor Herbert Bautista, is a bailiwick of the Liberal Party (LP) administration coalition, which could give an edge to the tandem of Manuel ‘Mar’ Roxas II and Maria Leonor ‘Leni’ Robredo, LP candidates for president and vice president.

Presidential aspirant Rodrigo Duterte of the Partido ng Demokratikong Pilipino-Laban (PDP-Laban), meanwhile, remains to be a force to be reckoned with in Davao City where he has served as an elected official for more than two decades. (He is currently its mayor.)

Duterte’s running mate Alan Peter Cayetano, for his part, can probably count on significant support from Taguig City, where his wife Lani is the incumbent mayor. Cayetano, currently a senator, was once vice mayor of Taguig and also representative of the then lone district of Taguig and Pateros in Congress.

Of course, there is Vice President Jejomar Binay of the United Nationalist Alliance (UNA), whose family until recently controlled Makati City since 1986. Binay started his political career in Makati City when the late President Corazon Aquino appointed him as its officer-in-charge. Binay’s wife Elenita and his son Jejomar Erwin or ‘Junjun’ had taken turns with him in occupying Makati’s mayoral post. Last year, the Office of the Ombudsman dismissed Junjun Binay as Makati Mayor for grave misconduct and dishonesty. Mar-Len Abigail Binay, the Vice President’s younger daughter who is now on her last term as Makati’s representative in Congress, is set to run for mayor. That will pit her against her brother’s successor, Romulo ‘Kid’ Pena Jr., of the LP.

Aside from Makati, though, Binay had been counting on votes from Cebu, where the party dominated by the Garcia political clan had struck an alliance with UNA. Recently, however, the One Cebu Party declared its ties with UNA as no longer in effect. Instead, the party said it would be supporting Duterte’s quest for the presidency. 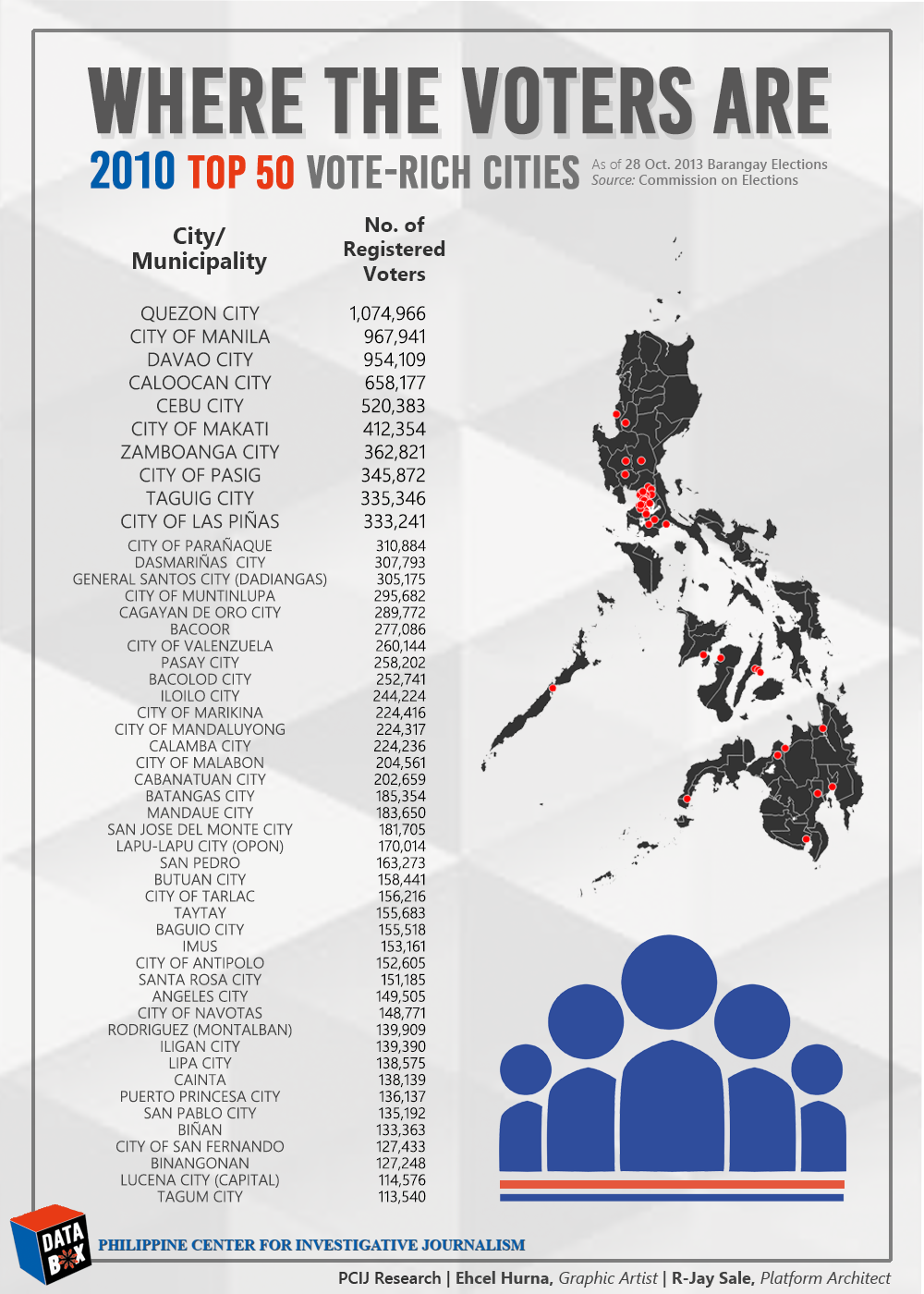 Interestingly, the Top 50 vote-rich cities are considered rich in terms of assets and equity.

Based on the 2014 Annual Financial Report of the Commission Audit (COA), Makati City has the highest equity among them, at P34 billion.

Equity is the difference between the local government unit’s total assets and liabilities.

Essentially, the cities included in the vote-rich roster have stayed the same since 2007, although there have been some changes in the ranking. This is while the number of registered voters has continued to increase through the years.