VOTERS KEEN in assessing the fitness for office of the five candidates for President in the upcoming elections may want to look at the presidentiables’ political pedigree and blood relations.

The five, after all, have occupied elective and appointive posts from a minimum of five to a maximum of 24 years. They spring, too, from political families with short to long histories, or slight to strong pedigree.

By their own admission in their respective Statement of Assets, Liabilities, and Net Worth (SALN) across the years, in small and large measure, power is family to the top candidates in next month’s balloting.

The picture varies, though. Some have as few as two while others have as many as eight relatives in the government service.

Here’s a rundown of the political history and family ties in the government of the five presidentiables: 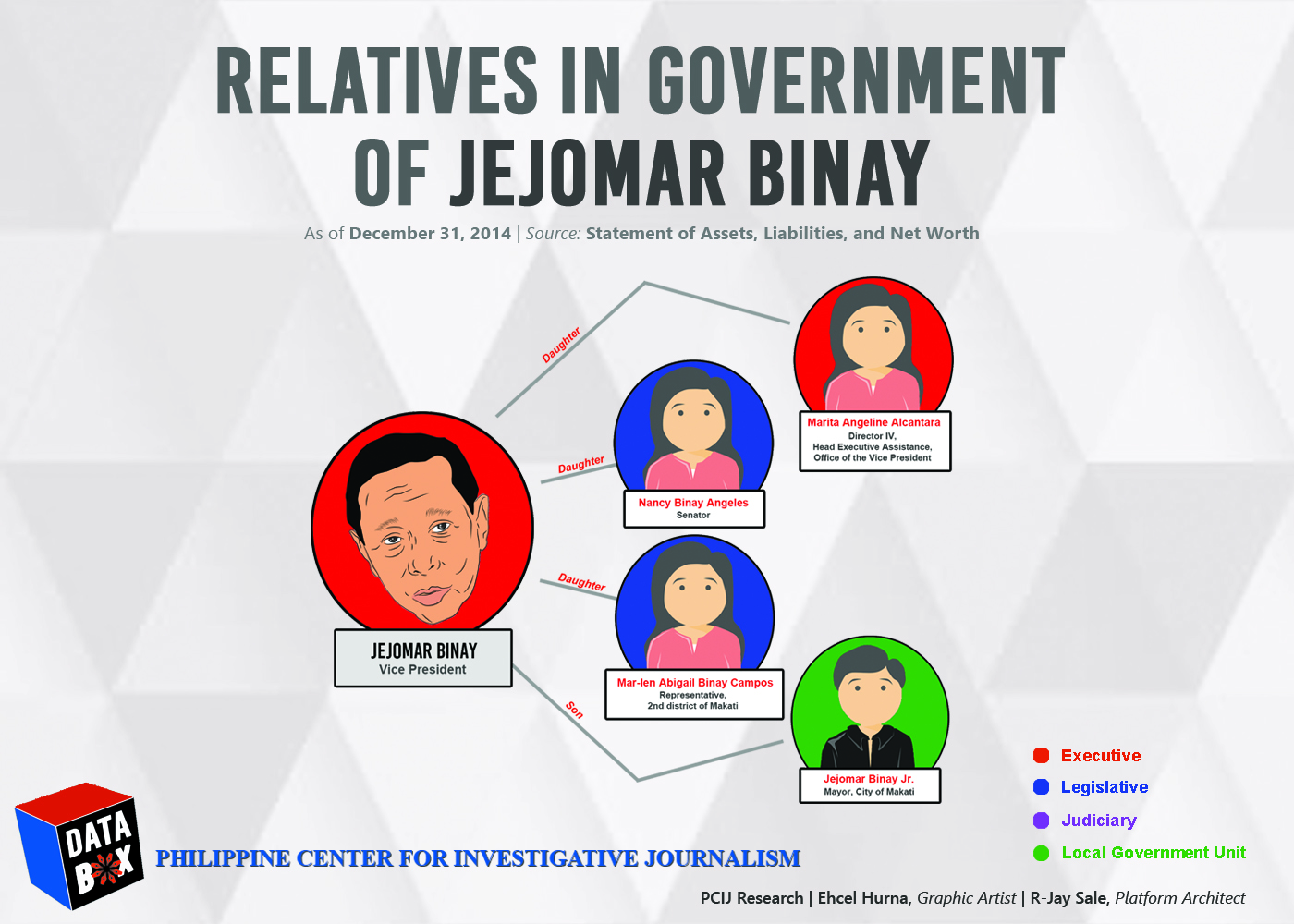 In his younger years as a lawyer, Binay had been a law professor and lecturer at the Philippine College of Commerce; St. Catherine’s School of Nursing and Midwifery; Philippine Women’s University; and St. Scholastica’s College.

He was a senior partner of the Binay, Cueva and Associates Law Office and had earlier worked as assistant attorney at the Deogracias T. Reyes Law Office; legal counsel of Manila Councilor Carlos Loyzaga; and claims examiner, Insular Life Assurance Company.

He is married to Dr. Elenita Sombillo Binay, who was elected Mayor of Makati City from 1998 to 2001, or during the three years that Binay could not run for the post.

The Binays have five children:

In his latest SALN, for 2014, Jejomar Binay declared having four children in the government service, including three holding elective posts: son Junjun and daughters Abigail and Nancy. Marita Angeline, meanwhile, holds the appointive post of head executive assistant, with rank of Director IV, in the Office of the Vice President.

SENATOR MIRIAM DEFENSOR-SANTIAGO has served as a trial court presiding judge, then Immigration commissioner, and Agrarian Reform secretary. She has been senator since 1997. Her third term in the Upper House will end this June. 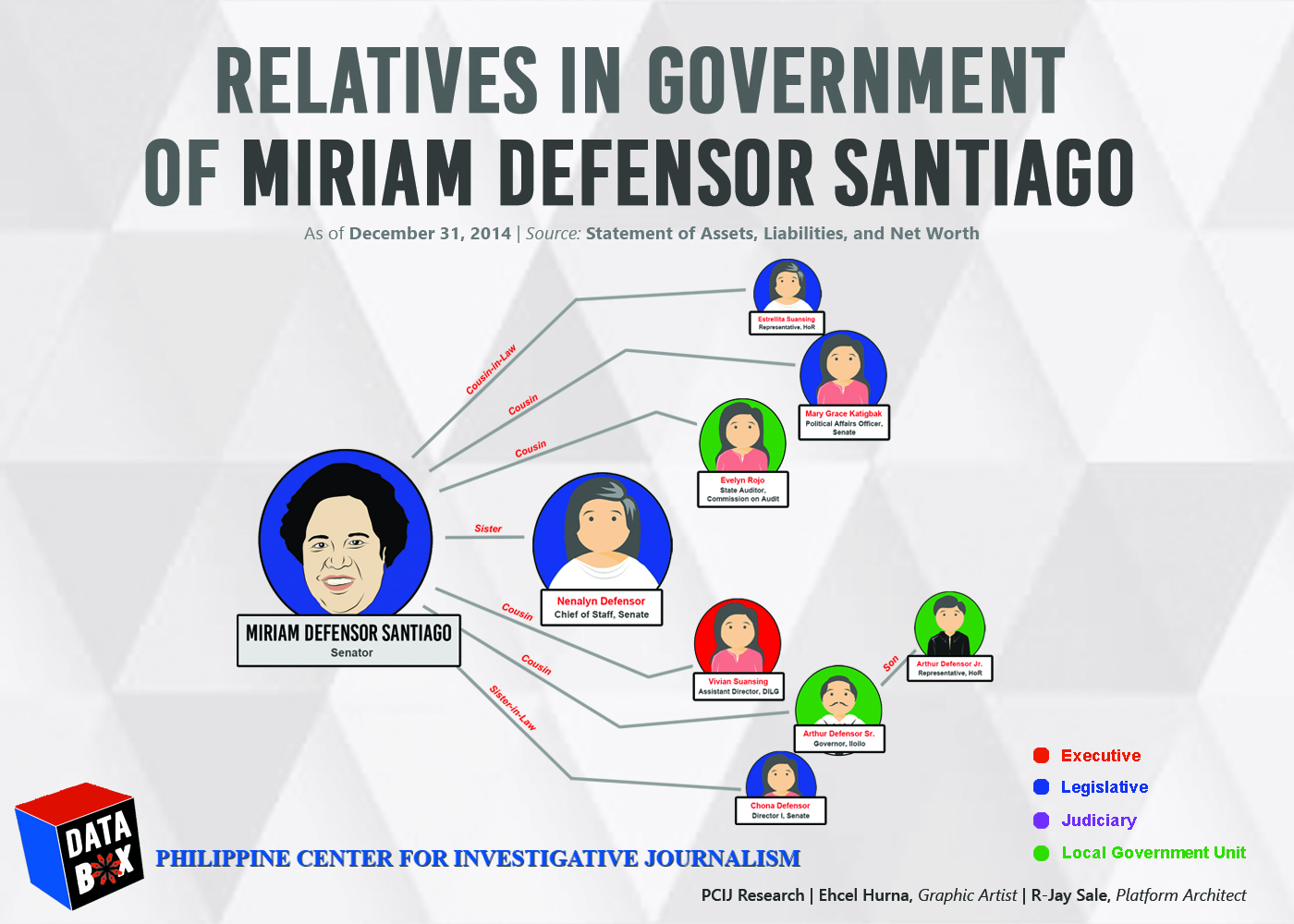 In December 2011, she was the first Filipina and Asian to be elected to a nine-year tenure as judge of the International Criminal Court. But she later declined the post, citing as reason chronic fatigue, which eventually led to a diagnosis of lung cancer.

Santiago’s relatives provide her access to a network of politicians and bureaucrats. Her cousins, nephews, and a niece have served alternately as representatives of the third district of both Quezon City and Iloilo from the 12th to the 15th Congress (2001-2013). Her husband, lawyer Narciso Yap Santiago Jr., has also been appointed to various government offices.

In her SALN for 2014, Santiago said she has eight relatives in the government service.

The senator’s sister Nanalyn Defensor serves as her chief of staff, cousin Mary Grace Katigbak is Political Affairs Officer, and sister-in-law Chona Defensor is Director 1, at the Senate.

Her paternal first cousin Arthur Defensor Sr. is incumbent governor, and his son Arthur Jr. is the congressman of the third district of her home province of Iloilo.

Maternal cousin-in-law Estrellita Bito-onon Suansing is the congressman of the 1st District of Nueva Ecija.

Cousin-in-law Vivian Suansing is assistant director at the Department of the Interior and Local Government.

During the Arroyo administration, Santiago’s brother Benjamin P. Defensor Jr. was Air Force chief. Santiago’s husband Narciso Jr., meanwhile, was an undersecretary of the Interior and Local Government under both Joseph Estrada and Gloria Macapagal Arroyo.

The Santiagos had two sons Narciso III or “Archie” and Alexander Robert or “AR,” who died in a reported suicide in 2003.

On July 18, 2007, Senator Santiago herself swore into office son Archie as representative of the Alliance of Rural Concerns (ARC) party-list group, which won a seat in that year’s elections. This was even after ARC had withdrawn Archie’s nomination as its top nominee, for supposed “loss of confidence, dishonesty, unauthorized exercise of authority and gross violations of the group’s Constitution and by-laws.” ARC has focused its advocacy on the extension of the comprehensive agrarian reform program.

The Santiagos have adopted daughters, twins Megan and Molly. 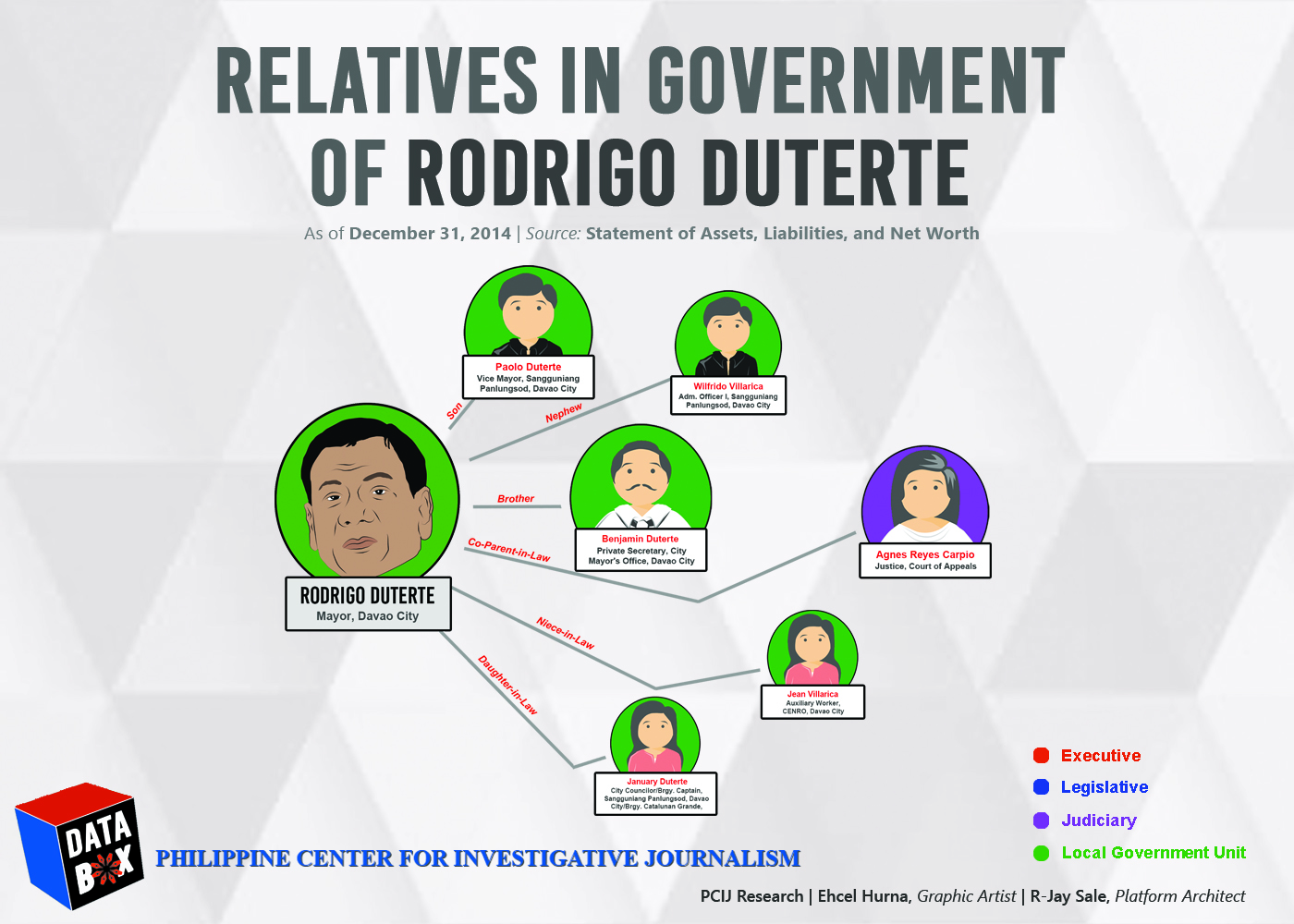 In 1998-2001, Duterte sat in Congress as representative of Davao City’s first district.

Duterte is separated from first wife Elizabeth Abellana Zimmerman, with whom he has three children: Paolo, Sebastian, and Sara Duterte-Carpio, who was Davao City mayor from 2010 to 2013. A fourth child, Veronica, was born to second wife, Honeylet Avancena, a nurse by profession.

In his SALN for 2014, Duterte listed six relatives in the government service. They include son Paolo who is Davao City vice mayor; brother Benjamin who is his “private secretary”; nephew Wilfrido Villarica, Administration Officer I of Davao City; daughter-in-law January Duterte, councilor/barangay captain of Catalunan Grande in Davao City; niece-in-law Jean Villarica, “auxiliary worker” of the CENRO (City Environment and Natural Resources Office); and co-parent-in-law Agnes Reyes-Carpio, a Court of Appeals Justice.

SENATOR MARY GRACE POE-LLAMANZARES has the shortest stint in public service among the presidentiables — as chairperson of the Movie and Television Review and Classification Board (MTRCB) from 2010 to 2012, and as senator since June 2013. 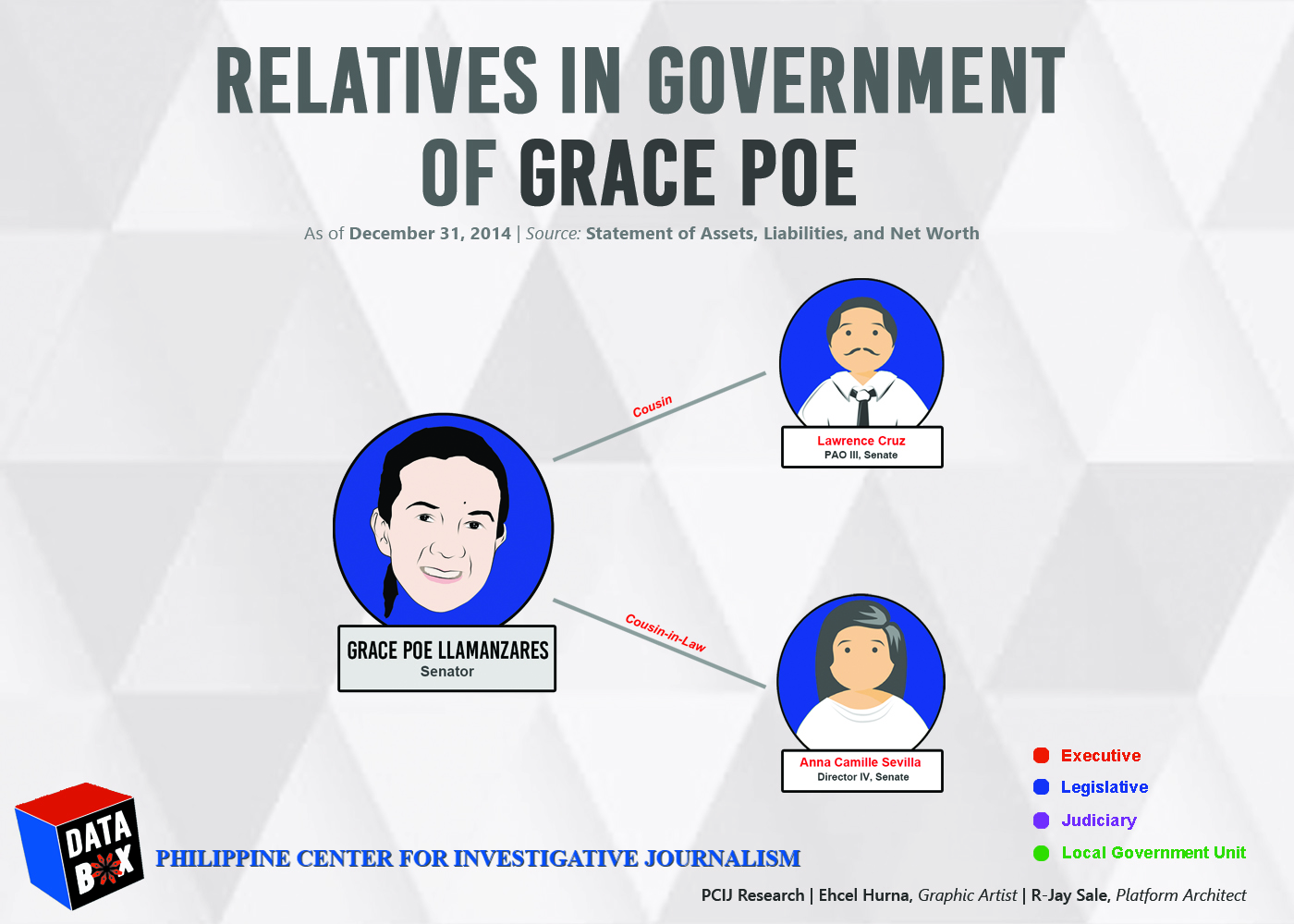 Poe has spent longer years working in the private sector. In 1995, she worked as a preschool teacher at a Philippine “Montessori education-style school,” and in 1998, as procurement officer at the United States Geological Survey. In 2005, she was named vice president and treasurer of FPJ Productions, the company of her father, popular action movie star Fernando Poe Jr., who died in December 2004.

In her SALN for 2014, Poe declared having two relatives in the government: cousin Lawrence Cruz, a PAO (Public Affairs Officer) III at the Senate, and cousin-in-law Anna Camille Sevilla, a Director IV at the Senate.

MANUEL ‘MAR’ ARANETA ROXAS II has served three presidents — as Trade and Industry Secretary of Joseph Estrada (1998-2000) and Gloria Macapagal Arroyo (2001-2003), and as Secretary of Transportation and Communication (2011-2012) and Interior and Local Government Secretary of Benigno S. Aquino III (2012-October 2015). 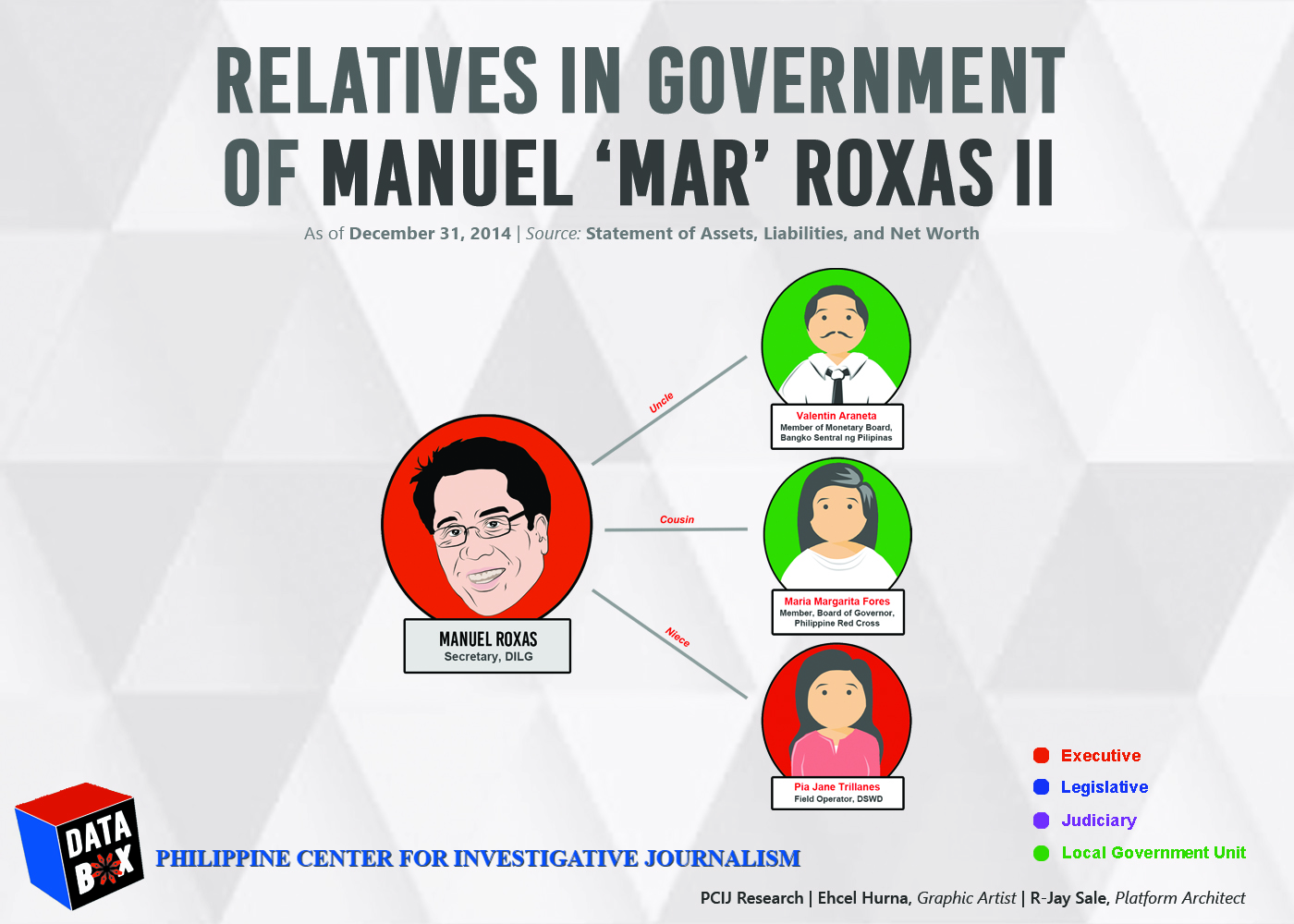 In the 2004 elections, Mar Roxas emerged No. 1 among the senatorial candidates, garnering 19 million votes. He ran as Aquino’s running mate in 2010, but lost to Jejomar Binay.

The eldest son of the late Senate president Gerardo Manuel de Leon Roxas and Judith Araneta Roxas, Roxas entered politics only in 1993, after the death of his younger brother Gerardo Jr. or ‘Dinggoy,’ then Representative of the 1st District of Capiz. Roxas also has a sister, Maria Lourdes Roxas Ojeda.

On his mother’s side, Mar Roxas is the grandson of J. Amado Araneta and nephew of Jorge Araneta, and Maria Lourdes Araneta.

J. Amado Araneta and Jorge Araneta have donated significant sums to Mar Roxas’s campaigns in elections past and present.

In his SALN for 2014, Roxas declared having an uncle, a cousin, and a niece in the government service.

President Aquino appointed Roxas’s uncle Valentin Araneta as member of the Monetary Board of the Bangko Sentral ng Pilipinas in 2014, a post that has a fixed six-year term. Earlier, Araneta had been president of the Philippine Deposit Insurance Corporation.

A first cousin of Mar Roxas, Maria Margarita Fores, meanwhile, was elected in January 2014 as one of the nine new Governors of the Philippine Red Cross, which receives some donations from the government but is not a state agency. Nevertheless, Roxas listed her among his relatives in the government service. Fores, who owns and runs the CIBO chain of restaurants and a culinary school, has become the caterer of choice of several Philippine presidents for big receptions at Malacanang Palace.

Roxas also has a niece, Pia Jane Trillanes, working as a Field Operator at the Department of Social Welfare and Development. DSWD is headed by Secretary Corazon ‘Dinky’ Soliman, a stalwart of the administration Liberal Party, which remains largely a veritable Roxas family heirloom. — PCIJ, April 2016
________________________________
For more details, check out PCIJ’s Money Politics Online