LEYTE –- As authorities seem to be standing pat on their claim that a shootout occurred between Albuera Mayor Rolando Espinosa Sr. and the operatives of the Criminal Investigation and Detection Group (CIDG) 8 at the sub-provincial jail in Baybay, Leyte before dawn on Nov. 5, photos provided by a police insider to PCIJ appear to point to a different story.

These photos, obtained just recently by PCIJ, show Espinosa’s bloodied body lying flat on his back with his eyes half-open, and both of his hands empty.

One of the photos also reveals Espinosa lying near a pink table, which the police insider says the mayor used to play Mahjong inside the detention cell. 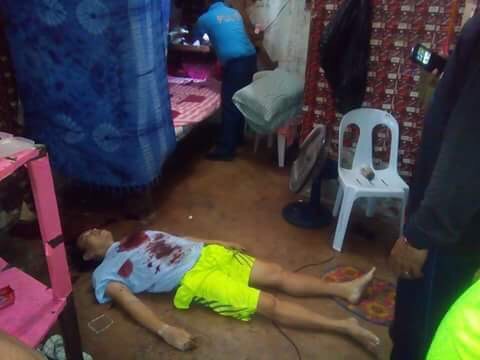 In another photo, a pair of slippers lies near Espinosa’s body.

The photos were taken immediately after the shooting incident when the law enforcers and civilian kibitzers ran toward inside the jail facility, according to the insider. The source adds that the photos were also shot “before the arrival of scene of the crime operatives (SOCO).’’ 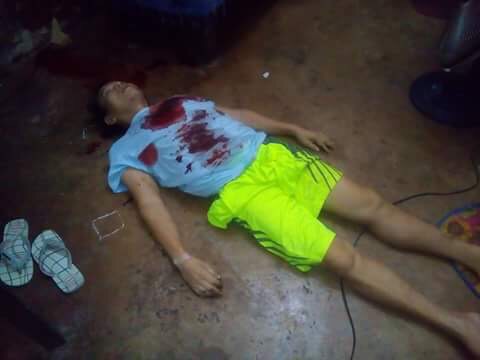 But an official photo released by the CIDG 8 shows Espinosa’s body slumped sideways with his right knee slightly up, and with his right hand appeared to be holding a gun. Authorities have said that Espinosa used a .38-caliber revolver in the supposed shootout.

In the CIDG photo, a chair that lay on its side was by Espinosa’s head, apparently to show a commotion took place, the source said. Another chair was near Espinosa’s feet, by the pink table.

The same photo released by the law enforcers also show a slipper missing its pair, unlike in the photos obtained by PCIJ in which a pair of slippers of the same design and color were near the body. Photos given to PCIJ also showed just one chair that was by Espinosa’s left foot. 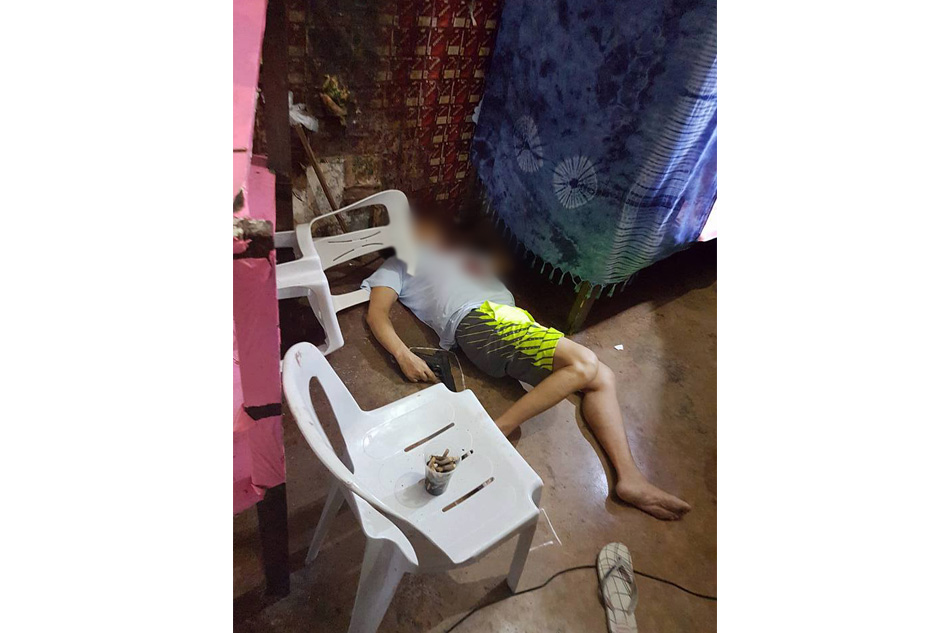 The question is when the official photo released to the public was taken and why the position of Espinosa’s body, among other things, was different from the other photos obtained by PCIJ.

PCIJ went to CIDG 8 regional office in the port area of Tacloban City to get their side on the photographs, but was told by a desk officer that no one there was authorized to speak to reporters pending today’s hearing before the Senate.

The desk officer also told PCIJ that 13 CIDG 8 officials and operatives who participated in the operation had been summoned by the Senate to shed light on the incident.

Based on the observations of Director Dante Gierran of the National Bureau of Investigation (NBI), the crime scene was not preserved and could affect the result of the investigation.

Gierran and his team were in Leyte yesterday to conduct a parallel investigation on the incident when chanced upon by PCIJ at the airport.

The police autopsy report showed that Espinosa sustained four gunshot wounds, including one in the head.

However, the police blotter report on the incident showed portions that had been corrected to enroll the name of Police Chief Inspector Leo Laraga, CIDG Region 8, as head of the raiding team. 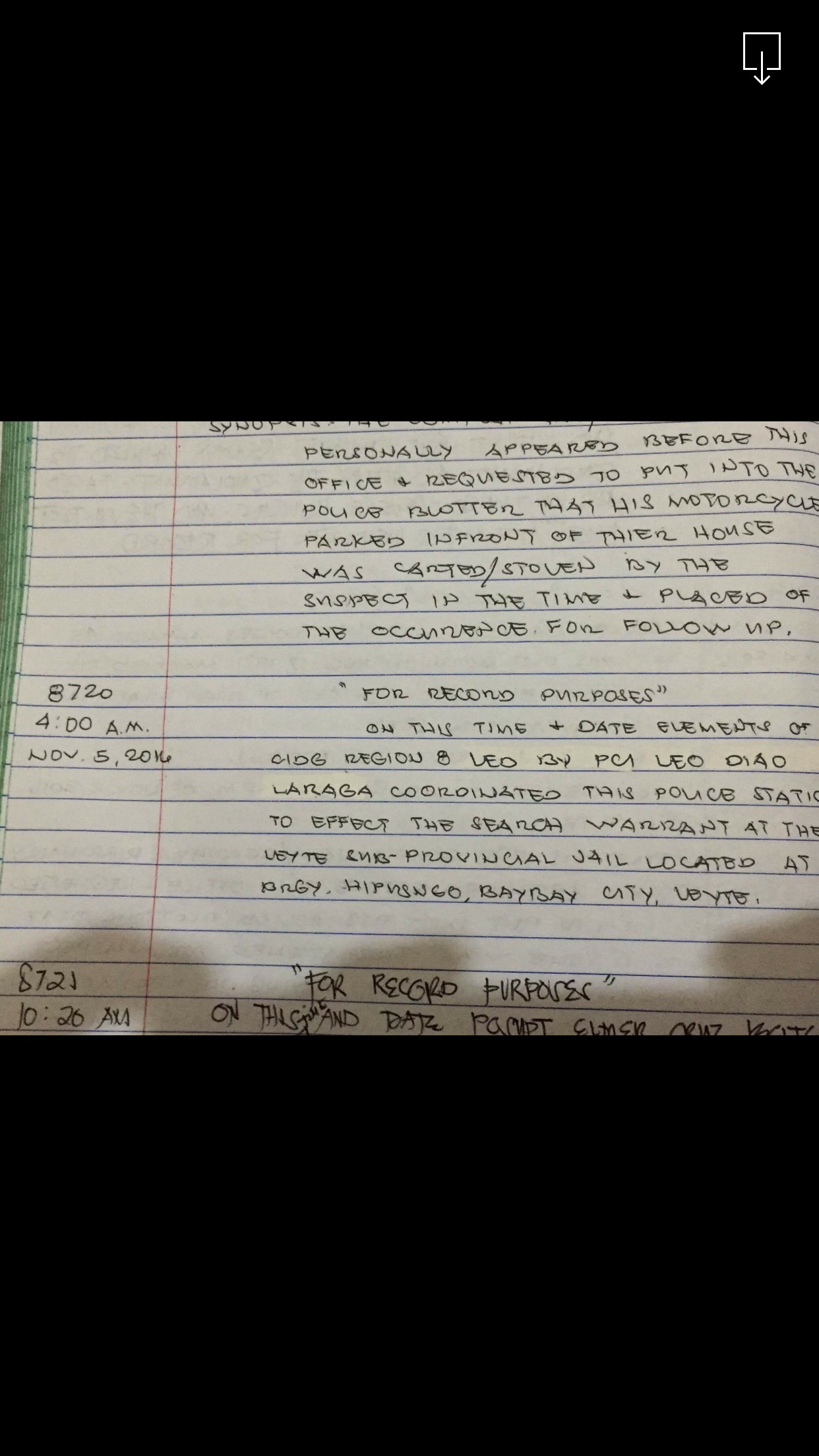 According to the NBI, which is conducting a parallel inquiry into the circumstances surrounding the incident, a second autopsy examination will be made only upon the request of Espinosa’s family.

An internal investigation conducted by CIDG in Camp Crame has revealed that Espinosa was alone in his cell apparently sleeping when the team of CIDG operatives arrived before dawn to serve a search warrant issued by Judge Tarcelo Sabarre of the Bassey Samar Regional Trial Court Branch 30.

The Supreme Court has ordered an investigation focusing on the circumstances in the issuance of the search warrants.

“However, the operatives also searched other cells where Yap was supposedly hiding when they failed to locate him in cell number two,” the police insider told PCIJ, adding it could be a violation in the rules of implementation of the court order.

The police source says Yap apparently moved to another cell during the standoff. Investigation also showed Yap fired at the operatives after a shot rang out in Espinosa’s cell.

Paraffin tests were conducted on Espinosa and Yap and both were supposedly found positive of powder gun residue, the police insider also says.

Espinosa and Yap had both been accused and detained for possession of illegal drugs. Espinosa was arrested in August following a raid in his house that yielded close to a million worth of shabu, improvised explosive device (EID), and several high-powered firearms.

Kerwin was arrested and detained by the Abu-Dhabi police following a request from Philippine National Police (PNP). After President Rodrigo Duterte won the elections, he fled from the Philippines in May and was hiding in the Middle Eastern country.

Duterte, during the campaign, had promised to go after personalities involved in the illegal drug trade.

In the interview with PCIJ, the police insider also said that the light inside Espinosa’s cell was off when the CIDG 8 team arrived and the operatives had to use flashlight from their mobile phones to illuminate the area.

The insider also said that based on the jail guards’ deployment blue book records, the closed-circuit television (CCTV) camera, which was expected to give authorities a clear picture, was not taken by the CIDG operatives.

“When we checked the records, one of the entries stated that the CCTV camera was broken and taken out of the facility for repair even before the shooting incident took place,” the source said.

They had no guns

The police source, however, confirmed statements of witnesses that before gunshots were heard emanating from his cell Espinosa had shouted, “’Wag ninyo akong taniman! Wala akong baril! Wala akong kutsilyo! (Don’t you plant anything on me! I have no gun! I have no knife!)”

“The jail guards said the slain inmates had no gun,” said the insider, “but the CIDG operatives maintained the inmates have guns and fired at them first.’’

Commented the police source: “There are two versions of the incident depending which side you are on.”

Based on the spot report submitted by Baybay City Police, aside from a loaded .38 caliber pistol, a sachet of suspected shabu were found in Espinosa’s cell. Meanwhile, a loaded .45 caliber pistol and some 15 packets of sachets containing suspected shabu and 27 pieces of sachets containing marijuana were recovered from Yap’s cell. — PCIJ, November 2016