A throng of typhoons

RIGHT AFTER calamities have ravaged homes and communities, the government mounts relief and rescue work with speed and vigor – and still has energy left to provide photo-op events for the media. But when it comes to the more difficult tasks of rehabilitation and recovery, or even preparing communities for when the next disaster comes – the downtime between calamities – the government takes on the character of a drunken turtle, rolling out projects and releasing funds in slow and scattered fashion.

Part 1: Yolanda: The disaster that lingers still
Sidebar 1: No time to grieve for kin
Sidebar 2: A burger joint rises

Part 2: Who, what, why, how much?
Sidebar 1: Relief protocols & rules
Sidebar 2: Politics & disaster a bad mix

Part 3: A lot of money, impact too little too late
Sidebar 1: A throng of typhoons
Sidebar 2: Reconstituting civil registry records

Evidence of government’s fluctuating focus in managing disasters abounds in the throng of typhoons that had visited the nation since 2011. This indicates that, to the government, rehabilitation and recovery work after a disaster could take more than three to four years to complete. In Yolanda’s case, that could only mean a much longer period of time.

To this day, the government has a tremendous unfinished business of restoring, rebuilding, and refurbishing public infrastructure, utilities, and services in the communities that typhoons even from years back had despoiled.

Perhaps even worse, the government has used supplemental budgets to repair and build infrastructure in Batanes, Ilocos Sur, Davao del Sur, and Zamboanga del Norte that were supposedly damaged by weaker weather disturbances – tropical storms Carina, Quedan, Ramil, Dante, Emong, and Kiko – that neither made landfall nor directly affected the Philippines.

Funds have also been provided for episodes of “monsoon rains” and “flash floods” that are by now usual occurrences most everywhere in the nation.

Yolanda earned top billing as the cause celebre for Malacanang’s request for two supplemental appropriations – PhP14.6 billion in January 2014 and PhP22.5 billion in December 2014 — that it sought and secured from Congress for disaster relief and assistance in communities affected by “natural and man-made disasters.”

Apart from Yolanda, the government threw in the names of several other typhoons as additional purposes for which the funds would be used.

Aside from the PhP13.39 billion that DBM and DSWD say have already been released out of the first supplemental budget as of last October, some PhP17.89 billion have also come from other disaster funds.

Just over half of the combined amount of PhP31.3 billion, however, has gone to assisting Yolanda survivors. The remainder of the funds went to areas affected by other calamities, including:

• PhP3.8 billion for the rehabilitation and recovery efforts on account of Typhoons Juaning, Quiel, Pedring, and Sendong that came in 2011; and Typhoons Carina, Gener, Helen, Quinta, Ofel, and Pablo, as well as “monsoon rains” that came in 2012.

• PhP23.5 billion for disaster assistance in communities affected by Typhoons Dante, Emong, Isang, Jolina, Kiko, Labuyo, Maring, Odette, Quedan, Ramil, Santi, Vinta, Yolanda, and Zoraida; “monsoon rains” and “flashfloods”; the magnitude 7.2 earthquake in Bohol and Cebu; and the siege and unrest in Zamboanga City, all of which occurred in 2013, pre-Yolanda.

• PhP866.7 million was allocated to areas affected by Typhoons Agaton, Basyang, and Glenda, Habagat-induced rains, and the unfolding eruption of Mayon Volcano in Albay in 2014.

• PhP18.4 billion went to addressing damage caused by Typhoon Yolanda, including PhP11 billion that was released to the National Housing Authority only in October 2014, for the construction of permanent homes.

Sendong and Pablo, which both crossed the island of Mindanao, were considered the worst typhoons of 2011 and 2012, respectively. Sendong affected 13 provinces; claimed nearly 1,500 lives; and damaged infrastructure, agriculture, and school buildings worth about PhP1.71 billion.

Pablo caused over 1,200 deaths and PhP73.91 billion in damage to infrastructure, agriculture, and property mostly in Davao Oriental and Compostela Valley.

Portions of some PhP524 million in disaster funds went to the reconstruction of roads, barangay roads, footbridges, and slope protection in the cities of Cagayan de Oro and Iligan, which Sendong ravaged.

Another PhP2.28 billion went to the reconstruction of similar infrastructure in the Davao region, including PhP123 million for the implementation of a number of livelihood training events under the “Pablo Rehabilitation Plan.”

The government, however, allotted sums from its supplemental appropriations even for weather disturbances that, according to the National Disaster Risk Reduction and Management Council or NDRRMC, did not do damage.

For example, at least PhP41.48 million was allocated for Typhoons Carina, Quedan, and Ramil, all of which did not directly affect the country.

Of the amount, PhP3.5 million went to the “repair/rehabilitation of seawall along the seacoast of Barangay Quezon, Santa, Ilocos Sur” that Carina supposedly damaged. But then according to NDRRMC, Carina – spotted on June 20, 2012 at 570 kilometers west of extreme northern Luzon – did not make landfall.

The balance of PhP37.98 million funded the repair and restorations of roads, slope protection, and line canals in Zamboanga del Norte that were supposedly damaged by typhoons Quedan and Ramil in October 2013. Quedan and Ramil were spotted east of Itbayat, Batanes. Neither typhoon affected the country, however.

Dante and Emong were located, respectively, in the northeast and east of Philippines. They then moved toward Japan and Taiwan without significant infrastructure damage or casualties.

Jolina, meanwhile, affected areas around the Liguasan marshland, including 14 low-lying towns in Maguindanao and seven towns in North Cotabato.

Kiko affected the western side of the country, but no storm signal was raised anywhere.

Labuyo made its landfall in Casiguran, Aurora. It pounded hard on Aurora and Zambales.

In terms of areas receiving disaster funds, Compostela Valley obtained the highest amount with PhP987.8 million for the repair of roads and bridges damaged by Pablo.

Albay came in next with PhP932 million, largely because of tropical storm Juaning in 2011. Albay, Camarines Norte, and Camarines Sur were severely affected by Juaning; total damage to property was placed at PhP4.44 billion in northern Luzon.

Of the funds for Albay, PhP529.7 million was used to repair and reconstruct various flood control structures such as dikes, slope protection, line canals, and spillways. Another PhP175 million was allocated for housing units at San Andres Relocation Site. Over PhP36 million went to the repair of water systems. Then in October 2014, PhP61.5 million was funneled through Albay’s provincial office for the “augmentation of relief assistance for the Mayon Volcano’s impending eruption.” 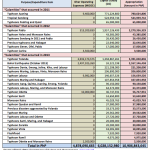 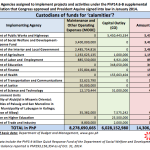 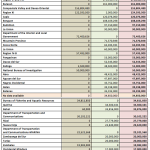 “Christian Aid funded this project/report as our contribution to the interest of the public’s right to know how the Yolanda funds are managed and used, and that the findings and recommendations are meant to feed into the policy discourse on Republic Act No. 10121 (The Philippine Risk Reduction and Management Plan of 2010) review and the Yolanda budget process.”