AS THINGS stand, it looks like the ruling coalition led by the Liberal Party (LP) of President Benigno S. Aquino III has more members implicated in the pork-barrel scandal than parties belonging to the opposition.

Of the 114 legislators who were allegedly involved in anomalous pork projects in 2007 to 2009, 38 now belong to the administration coalition.

About 33 of the 114 belong to the opposition parties while the rest are either already dead or have unknown political affiliations.

But while the LP-led coalition has more members linked to the pork-barrel scandal than the opposition, they got much less in terms of rebates from the bogus non-government organizations that had served as pork-fund funnels of Janet Lim Napoles, the so-called pork barrel scam queen.

Based on documents from the legislature as well as several state agencies and the files of pork scam whistleblower Benhur Luy, 38 LP coalition legislators received a combined sum of P138.7 million in rebates from the Napoles NGOs. This comes up to just 14 percent of what the 33 legislators from the opposition received, which was a total of P988.2 million.

In part, this may be because the LP lawmakers had allocated much less to the National Agribusiness Corporation (NABCOR), a major source of pork and other public funds that the Napoles NGOs had secured for their bogus projects.

NABCOR got from the LP camp a total of P416.5 million in pork monies, and from the opposition camp, P640.2 million.

With each election in this country, though, comes a shift in the Philippines’s political landscape. As such, classifying the political leanings of the legislators who may or may not have benefited from pork-barrel projects is tricky.

In fact, of the 114 names revealed in both the records of the whistleblowers and government agencies, only seven lawmakers had been originally allied with LP.

Many of the others had supported the Lakas political party of then President Gloria Macapagal-Arroyo. Upon Aquino’s assumption to office in 2010, however, at least six of these pro-Arroyo lawmakers became LP converts. More members of the Lakas-led administration coalition under Arroyo that later became the opposition under Aquino – 25 in all – shifted alliance in 2013.

Original LP and not

Two of the seven LP stalwarts whose names have come up in connection with the pork-barrel mess are now dead. Former Manila’s 1st District Rep. Ernesto A. Nieva died before his term expired in 2010. Former Bataan 1st District Rep. Antonino P. Roman, meanwhile, died in January 2014. Roman had joined the LP in 2004, and was appointed head of the Presidential Legislative Liaison Office in 2010. 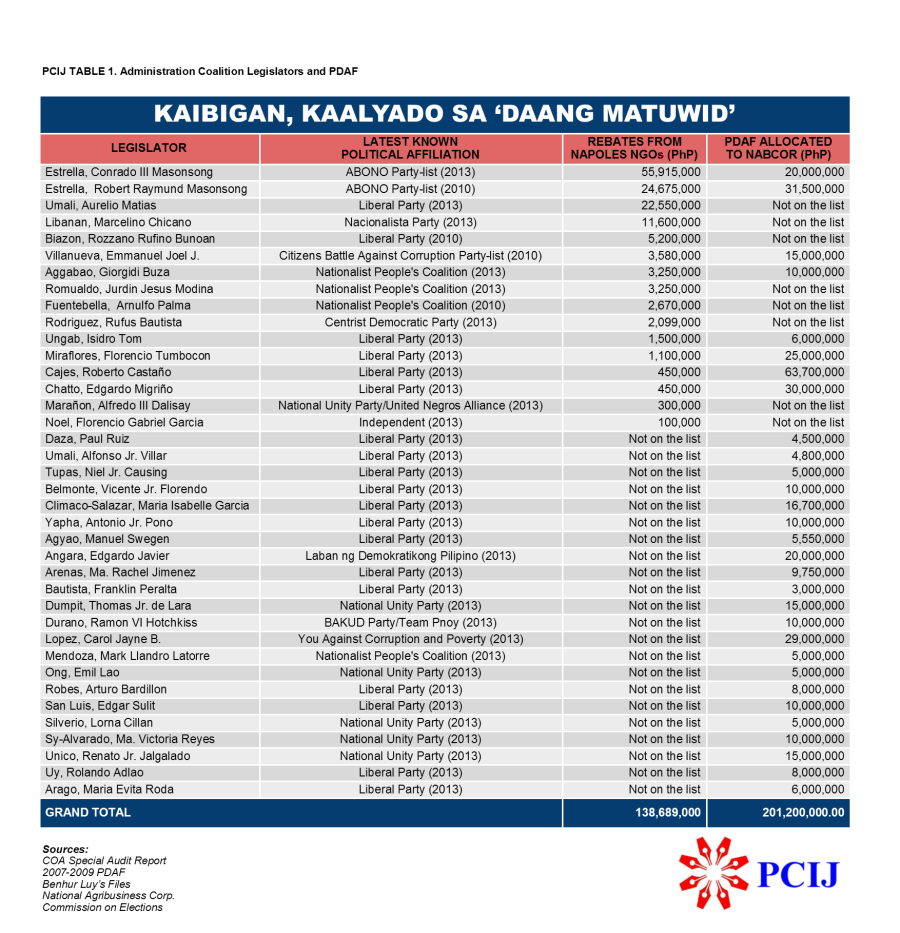 Another “original” LP member is Iloilo City’s 5th District Rep. Niel C. Tupas Jr., an LP stalwart who sits as the party’s deputy secretary general at its national political council. Currently serving his third term in Congress, Tupas chairs the House Committee on Justice. But the public is most familiar with him as the chief public prosecutor during the impeachment trial of former Chief Justice Renato Corona.

Daza was a one-term representative of the first district of Samar; he had replaced his father, Raul (a staunch LP leader who now sits as the party’s legal counsel), in that seat in 2007. Umali is the LP’s treasurer. He was Oriental Mindoro’s second district representative from 2001 to 2010.

Biazon, for his part, is a close ally of Aquino. He was a three-term representative of Muntinlupa City from 2001 to 2010. Aquino appointed him in 2011 as commissioner of the Bureau of Customs after his failed Senate bid in 2010. He resigned in 2013 after he was implicated in a malversation complaint stemming from the pork-barrel scandal.

Then there is Arago, who served as Laguna’s third district representative from 2007 to 2013. She lost her bid for a third term in the 2013 elections. She has always run under the LP ticket.

Two of the lawmakers on the list are now known Aquino allies but were actually party-list representatives when they were in Congress: Technical Education and Skills Development Authority (TESDA) Director-General Emmanuel Joel J. Villanueva, who was with the Citizens Battle Against Corruption (CIBAC) and Florencio Gabriel G. Noel of An-Waray.

Belmonte was a member of the United Opposition in the 2007 polls but converted to LP in 2010. Ungab used to be with the Partido Demokratiko Pilipino-Lakas ng Bayan (PDP-LABAN) before he joined LP. Ungab has headed one of the two most powerful House committees as a member of the ruling LP party: Committee on Appropriations (2013-present) and Committee on Ways and Means (2012-2013).

Cajes and Chatto served in Congress from 2001 to 2010 as representative of Bohol’s second and first districts, respectively. Both also had been associated with the opposition Lakas party before they became LP members following the 2010 elections.

Climaco-Salazar, meantime, was with the Laban ng Demokratikong Pilipino (LDP) before she switched alliance in 2010. Yapha used to be with the Nationalist People’s Coalition (NPC) and Philippine Democratic Socialist Party (PDSP).

At other side of the fence, things seem much less dizzying, at least when it comes to political affiliations. Indeed, it’s either they had stayed with Arroyo’s Lakas party or continued to be allied with the United Nationalist Alliance (UNA) of Vice President Jejomar C. Binay in 2010 and 2013. In the May 2010 elections, however, Binay and his fellow non-LP candidates had called themselves UNO, or the United Nationalist Opposition, and not UNA. 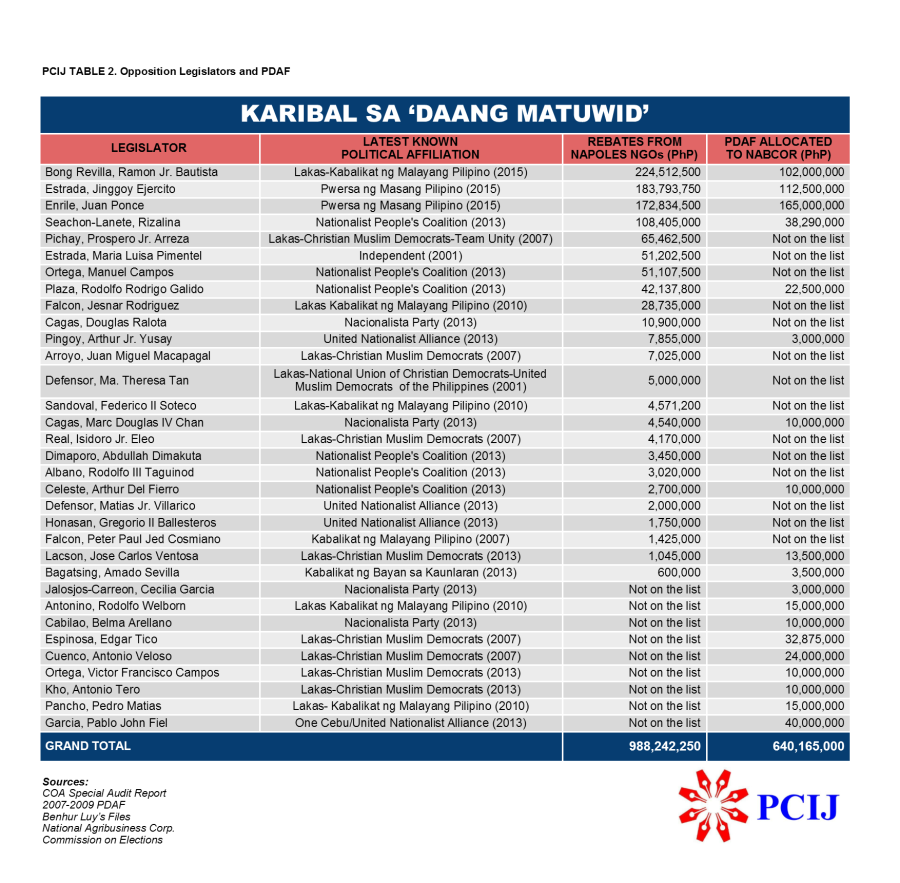 Two of the 33 opposition bloc members implicated in the pork-barrel scam are Lakas stalwarts. Senator Ramon ‘Bong’ B. Revilla Jr., who has been under detention since 2014 on plunder and graft charges, is considered as the party’s standard-bearer for the 2016 presidential elections. La Union 1st District Rep. Victor Francisco C. Ortega, meanwhile, has been with the party since 1995.

Six have remained in the opposition even though their parties, NP and NPC, had allied with the LP-led coalition in the May 2013 elections.  They include:

Four are affiliated with Binay’s UNA. These include Senators Juan Ponce Enrile and Jose ‘Jinggoy’ Ejercito Estrada (both now under detention like Revilla) who are members of Joseph Estrada’s PMP. Senator Gregorio B. Honasan II ran under the UNA senatorial slate in 2013. Honasan recently expressed support for Binay’s presidential bid in 2016. Manila’s 5th District Rep. Amado S. Bagatsing is the leader of the Kabalikat ng Bayan sa Kaunlaran (KABAKA) party, which allied with UNA in 2013.

Twenty-one of the 33 opposition members are not incumbent officials. They were, however, last affiliated with at least one of these four: Lakas party, NPC, 1-Cebu, or UNA. NPC used to be Arroyo’s congressional ally.

Among the 21 is former Davao del Sur 1st District Rep. Marc Douglas C. Cagas IV, who spoke on behalf of the minority bloc and was a staunch critic of the Aquino administration during his term in Congress. Former Agusan del Sur Rep. Rodolfo Rodrigo G. Plaza is a close political ally of Binay. (Last May, Senator Antonio Trillanes IV had suggested that a company linked to Plaza and his wife Shirley Marie were among those who received multimillion-peso loans from the PAG-IBIG Fund because of the Plazas’ connections with Binay. Pag-Ibig President and Chief Executive Officer Darlene Berberabe said, however, that she had not let her agency become “an instrument of abuse.”)

There are 32 names in the list of 114 lawmakers entangled in the pork mess whose affiliation PCIJ could not determine. Six are currently in government service, while the rest are not incumbent officials. 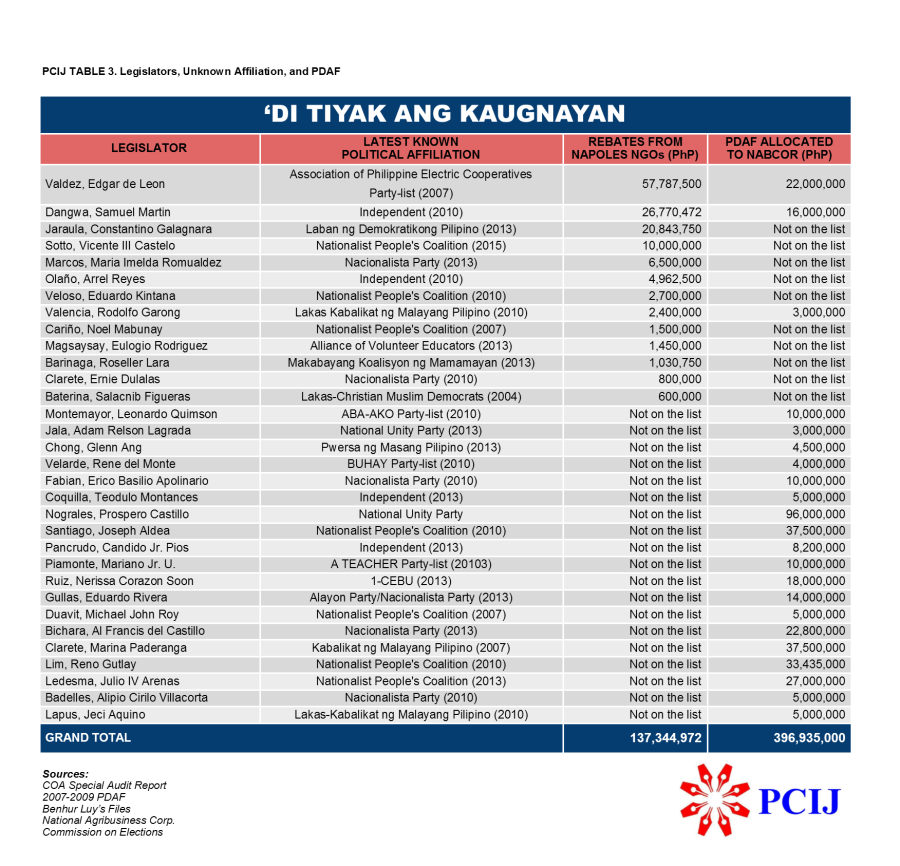 These incumbent officials include Senator Vicente C. Sotto III, a senior NPC member who was quoted in recent reports saying that NPC, which had allied with Aquino in 2013, has not yet decided who to support in the 2016 presidential elections.

Albay 2nd District Rep. Al Francis C. Bichara has been with the NP since 2010. But his alliance remains uncertain because he is known not to be on good political terms with recent LP convert and outgoing Albay Governor Joey Salceda. Salceda had announced earlier that he would be running for Congress in 2016.

The political alliance of Ilocos Norte Gov. Maria Imelda R. Marcos remains uncertain, too, because her brother, Senator Ferdinand R. Marcos Jr., is said to be eyeing the presidency in the May 2016 elections. 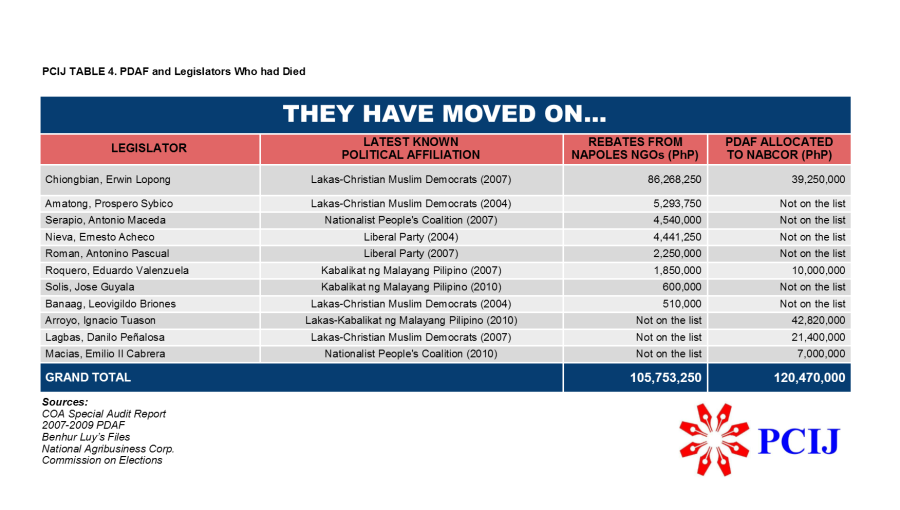 Finally, the records reveal nine more deceased legislators on the list, aside from the two from LP. Seven were last affiliated with the Lakas party while the remaining two were with NPC.  – With research by Earl G. Parreno, PCIJ, August 2015