Can President Arroyo explain her wealth?

A FORTNIGHT ago in her ninth State of the Nation Address, Gloria Macapagal Arroyo fired sharp, staccato broadsides at her critics, and in a tone bold and boastful declared: “I am falsely accused, without proof, of using my position for personal profit.”

“There isn’t a day,” she said, “I do not work at my job or a waking moment when I do not think through a work-related problem. Even my critics cannot begrudge the long hours I put in.” 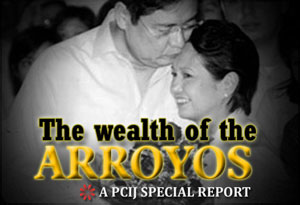 “A president must be on the job 24/7, ready for any contingency, any crisis, anywhere, anytime,” Arroyo continued, because “the people deserve a government that works just as hard as they do.”

By all indications, President Arroyo has worked very hard. In fact, she has worked so hard that during her first years as president, official records show her declared wealth as growing faster, and by amounts much bigger, than the combined growth in the declared wealth of three presidents before her.

PCIJ reports in 2000, though, revealed that the mansions and other assets held by Estrada and his mistresses were worth multiple times more than his declared net worth. Less than a year later, Arroyo came to power after a botched impeachment trial of Estrada for unexplained wealth triggered a people-power revolt.

But the lessons of Estrada’s downfall seem to have been lost on Arroyo. In her eight years in office, Arroyo’s declared net worth more than doubled (pegged only on the book or acquisition value of her assets), from P66.8 million in 2001 to P143.54 million in 2008. The increase of P76.74 million represents a growth rate of 114 percent.

If her statements of assets, liabilities, and net worth (SALNs) are plotted from 17 years ago when she first served as senator, Arroyo’s declared wealth charts an exponential growth of 2,000 percent.

Since she got into Malacanang in 2001, Arroyo added P10.97 million to her net worth year on year on average, or 20 times more than her lawful gross salary as president of only P45,000 a month.

If various allowances are thrown in, her monthly pay would total at most P100,000 or P1.2 million a year before tax. Yet even then, this represents only 10 percent of the P10.97-million average annual increase in Arroyo’s net worth since 2001.

Arroyo’s SALNs, however, offer few clues on how she raised the big difference, or whether she has other lawful sources of income. Since 2001, the president has apparently taken the path of token compliance instead of going for full disclosure in form and substance of her assets and liabilities, according to the Constitution and law. As a result, her SALNs in the last eight years have been remarkably full of gaps in data.

For sure, they pale in comparison to the detailed documentation that former Presidents Aquino and Ramos exemplified in their SALNs. Both Aquino and Ramos even attached to their SALNs photocopies of their income-tax returns (ITRs) and checks attesting to payments they made with the Bureau of Internal Revenue. Arroyo did not attach her ITRs.

Not a good example

At the very least, Arroyo’s SALNs may not pass as what should be expected from the chief executive, who ideally sets the example for all of the country’s 1.5 million civil servants.

Comments Karina Constantino-David, who worked as Civil Service Commission (CSC) chairperson under Arroyo: “When a high official like the president is unable to fulfill the responsibilities expected of her according to the constitution, how can she convince other public servants to take seriously the dictum ‘Public office is a public trust’?”

In recent years, token compliance with the law on filing SALNs had caused mayors, military officers, customs and revenue officials, and other civil servants of less senior status jail terms, stiff fines, and dismissal or suspension from work.

Failure to disclose properties in the name of his wife and children, for instance, earned Armed Forces general Carlos Garcia a two-year stint in jail.

While in the National Bilibid Prisons for murder and rape, former Calauan, Laguna Mayor Antonio Sanchez was also fined P5,000 per year for four years for what lawyers say passes for perjury by omission: defective compliance or non-compliance with the SALN law.

Meanwhile, the docket of the Ombudsman, which is tasked to investigate and file cases against public officials, is littered with complaints of defective or non-compliant SALNs. Most of the defendants are local executives and mid-level civil servants. The president is required to submit his or her SALNs direct to the Ombudsman.

Section 8 of the Code of Conduct and Ethical Standards for Public Officials (Republic Act No. 6713) requires a policy of full disclosure by all public officials and employees of their:

– all other assets such as investments, cash on hand or in banks, stocks, bonds, and the like;

– all business interests and financial connections.

The law says that officials “have an obligation to accomplish and submit declarations under oath of, and the public has the right to know, their assets, liabilities, net worth and financial and business interests including those of their spouses and of unmarried children under eighteen (18) years of age living in their households.”

Arroyo took her oath of office as president before the Constitution whose Article XI defines the “accountability of public officers” thus: “Public office is a public trust. Public officers and employees must, at all times, be accountable to the people, serve them with utmost responsibility, integrity, loyalty, and efficiency; act with patriotism and justice, and lead modest lives.”

By now, filing SALNs within clear bounds of sufficient form and substance should be routine for Arroyo. After all, she has been a public servant for more than two decades, starting with her stint as trade and industry assistant secretary in 1987 during the Aquino administration.

Stocks, also called shares or equity, represent claims of ownership in a company.

Arroyo stacked up her stock portfolio even as the global financial crisis sent stock markets tumbling down, and the national economy posted sluggish growth.

Unfortunately, she is silent on which companies she invested in to build her fabulous stock portfolio. These data are sorely missing in her SALNs, making it difficult to assess the veracity of Arroyo’s net worth, especially since by 2008, stocks already made up 69 percent of her declared wealth.

Curiously, the first time Arroyo disclosed that she had company shares was in 2001, when she reported P7.5 million worth of stocks. But this amount disappeared in her 2002 SALN, which showed no entry for stocks. In truth, stocks would not figure in her subsequent SALNs – until 2006, when she began reporting these once more, but without any other details about such.

In 2007, the CSC then still headed by David tried to implement a new SALN form that would capture baseline data, including assets in the name of the declarant’s spouse and children, location of properties, cars, mutual funds, money market placements, and equity in partnerships. The implementation was delayed until 2008, but even then, Arroyo used the old form.

Among other things, the new SALN form would have required the president and other officials to list the acquisition value of the stocks they acquired. But since this detail is missing in the forms filed by Arroyo, one can only speculate on the possibility that she invested P7 million more in stocks in 2007, and an additional staggering sum of P46 million in 2008. It is possible as well that Arroyo has interests in corporations blessed with galloping revenues.

But by the limited admissions in her 2008 SALN, Arroyo has equity in just one company: La Vista Investments and Holdings, Inc.

From 1992 to 2000, when she was senator and then vice president, she listed a few companies, all small, all not significantly profitable, including LTA, Inc. and LTA Realty, both based at the LTA building in Makati City, owned by the family of the First Gentleman, Jose Miguel ‘Mike’ Arroyo; and JJ Agricultural Corp. based in Bacolod City.

David says the “possibility” offered is that the First Gentleman has been “doing nothing” and is fully dependent on the president for his keep. “But I find that hard to believe,” she says, “because it’s often said that (the First Gentleman) is the one who is rich, the one with many real estate properties.”

In her 2008 SALN, when President Arroyo finally took cognizance again of her husband, she listed La Vista Investments and Holdings Inc as a company based at the LTA building, and in which the First Gentleman became a stockholder supposedly only in December 2008.

Yet PCIJ’s research at the Securities and Exchange Commission (SEC) yielded more firms in which the Arroyos are enrolled either as incorporators, stockholders, or beneficial owners.

Updated as of October 2008, SEC records showed that President Arroyo remains listed as having business interest and/or financial connections in the following registered entities:

SEC records also show the First Gentleman as having business interest and/or financial connections in:

Interestingly, the sudden lack of detail in Arroyo’s SALNs coincided with her ascent to the presidency. This was also the period when she had command over some of the best, and by many accounts, the most politically astute, lawyers in the land.

Former senator Rene A.V. Saguisag, main author of the Code of Conduct and Ethical Standards for Public Officials, says that at the very least, “transparency is what I would expect” from Arroyo as president. “It does not hurt if your president leads by example,” he adds.

But Saguisag concedes that Arroyo’s token compliance with the law is the typical conduct of most high officials. “Of course, she did not list/identify her stocks in her SALN,” he says. “The idea in our law was to be specific but this has been more honored in the breach than in the observance. Hindi yata nag-iisa si GMA, to be fair (GMA is probably not the only one doing this).”

For his part, Arroyo’s chief presidential legal counsel Raul Gonzalez says full and better compliance could have been enforced had the lesson offered by ex-President Estrada’s fall from power not been wasted.

“Had it sunk a little further, had Erap not been pardoned, yes,” Gonzalez says, affirming that he had opposed Arroyo’s grant of pardon to her successor, who was detained for five years while being tried for plunder and perjury.

Gonzalez notes that Estrada had been convicted in a huge plunder case, and yet “he went out scot-free.” He asserts, “I was not in favor of that, I would have allowed him to be imprisoned for some time to let the matter sink in the minds of the public.”

Estrada’s pardon sent the wrong signal, says Gonzalez. “The message was that in the very beginning there was political will to have him arrested, but that political will was diluted after he was convicted,” he says. “Imagine, convicted na, pinakawalan mo pa (yet you set him free)!”

For this series of reports on the Arroyos’ wealth, the PCIJ compared the SALNs Arroyo filed in the last 17 years with the SALNs submitted by her two sons who are members of the House of Representatives, Juan Miguel ‘Mikey’ Arroyo (Pampanga) and Diosdado ‘Dato’ Arroyo (Camarines Sur), and by other relatives in public office.

Next, the PCIJ corroborated the SALNs with corporate and other official records in the name of the Arroyos filed with the SEC and other relevant government agencies.

To validate the findings of its research, the PCIJ obtained interviews with independent sources chosen for their established expertise on the subjects of inquiry, including lawyers, fund managers, and tax analysts.

To secure the side of Arroyo and members of her family, the PCIJ requested interviews with her key officials, including Gonzalez, Executive Secretary Eduardo Ermita, Press Secretary Cerge Remonde, and Presidential Deputy Spokesperson Lorelei Fajardo. Only Gonzalez agreed to be interviewed by the PCIJ.